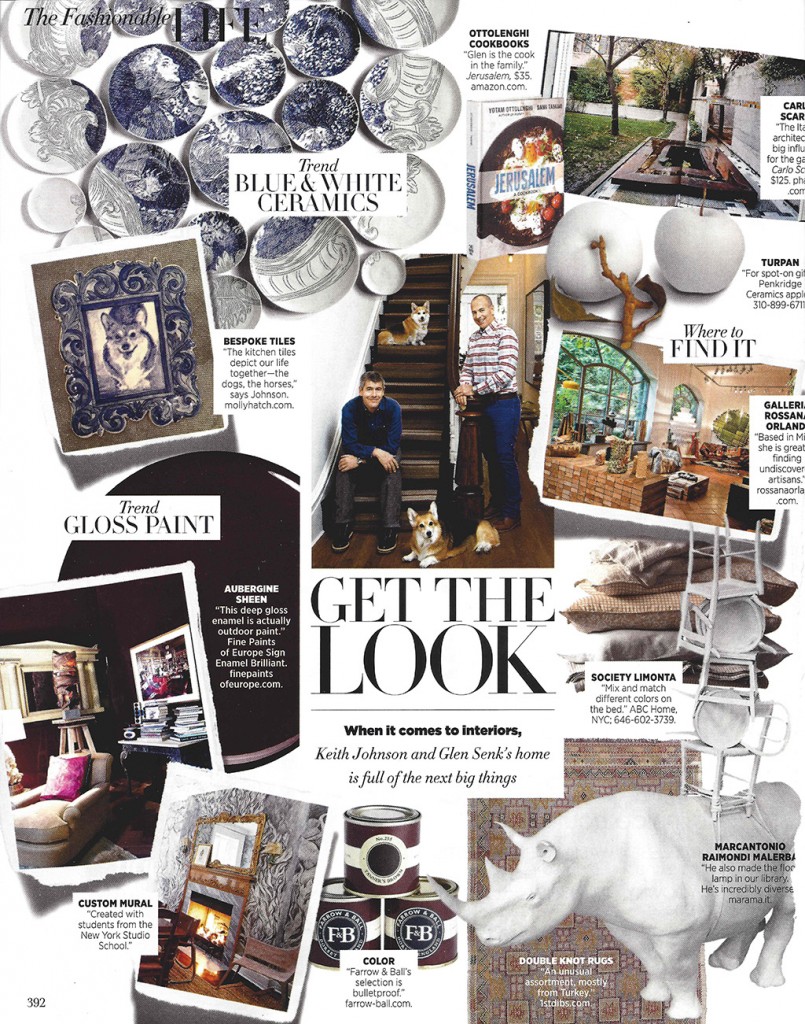 When it comes to interiors, Keith Johnson and Glen Senk’s home is full of the next big things. Plus, see all photos here.

Glen Senk is a man of instinct. Not just in business (he’s the CEO of the David Yurman jewelry empire and spent five years at the helm of Urban Outfitters) but also in matters of the heart. It was love at first sight when he met his future husband, Keith Johnson, at the ripe old age of nine. “I was a new kid in school,” Senk recalls, “and when I walked into my first class at Robert Seaman Elementary in Jericho, New York, I knew in that instant.” When Johnson defended Senk from bullies at recess, his crush became official. They began dating in earnest at 18, and are still together nearly 40 years later.

Christopher Sturman
Today the couple’s Greenwich Village home is a tribute to two of their shared passions—corgis and horses. But more on those later; first some details on their palatial pad. An Anglo-Italianate town house on West Ninth Street, it was built in 1852 and remained a single-family home until the mid-20th century, when it was broken up into apartments. Senk and Johnson bought the five-story building in 2012 and spent a year restoring it to its former glory as a stately downtown home.

“At first Keith said he only wanted to renovate the kitchen, and I thought, Yeah, whatever, we’ll see about that,” Senk says. Indeed, Johnson, who presided over the home-design department at Anthropologie for 18 years, gave the whole house a major overhaul, but the kitchen was an exceptional undertaking. The floor, paved with stones imported from the streets of Bologna, Italy, was dug down a full foot. And, inspired by a cooking course that the pair took in Florence, Johnson had a wood-burning fireplace outfitted with an industrial-style crank, which lifts and lowers a grill above the flames. Senk, who is the chef of the family, takes his role very seriously: “I like to cook, and Keith likes to eat, clean, and tell me everything is delicious.”

Every inch of the home reflects Johnson’s touch. The formal dining room pays tribute to Gertrude Vanderbilt Whitney’s sculpture studio, an often-overlooked landmark located around the corner from the house. To create murals resembling the studio’s flame-adorned ceiling and fireplace, Johnson enlisted students from the nearby New York Studio School. Above the dining table is a Murano glass chandelier by the Japanese artist Yuichi Higashionna. “My personal taste definitely leans toward traditional,” says Johnson, “but I love how things like artist-made furniture can make you look with new eyes at antique pieces in a room.” He saw to it too that the house’s 10 fireplaces were restored to working order, and he replaced their Victorian-era marble surrounds with antique English and French mantelpieces. Six remained wood burners, while four were converted to gas and set with handmade logs, twigs, and ash by Neville Stephens and Allan Christensen, British-based craftsmen whose custom installations evoke a crackling fire, and whose work Johnson discovered while antiquing in London.

Christopher Sturman
In the foyer, visitors are greeted by Stable, a video work by Kathleen Herbert that depicts horses exploring England’s Gloucester Cathedral by moonlight. “I put the video at the entrance to create a pause point,” Johnson explains. “Our neighborhood is so busy, and it’s wonderful to come in to the sound of the horses on the stones of the cathedral.”

The video is also a nod to Senk’s equestrian passions. He rides competitively and keeps six show hunters; the males are named after Hollywood heartthrobs—Jake, for Jake Gyllenhaal, and Ryan, for Ryan Reynolds. The animals spend winters in Wellington, Florida, and summers in Hunterdon County, New Jersey. “If you believe in reincarnation,” Senk says with a wink, “you’d want to come back as one of my horses.”

Among the house’s crowning jewels is a fully stocked Art Deco bar with mirrored gilded walls, on the second floor. The bar is flanked on one side by a sitting room, whose grand piano is a constant reminder to Senk that he needs to resume lessons. “My goal is to get good enough to play half a dozen songs at a party,” he says. “It’s just the coolest thing when someone sits down and—boom!—starts belting out songs everyone knows.” On the other side is the library, a more formal space with an enormous hearth, a towering bookcase, and walls polished to a deep, decadent gloss.

At first Keith said he only wanted to renovate the kitchen, and I thought Yeah, whatever, we’ll see about that. —Glen Senk

The other couple living here, a pair of corgis named Skibo and Piper, usually stay on the house’s third floor, although their presence is felt in almost every room; even the kitchen is decorated with tiles painted in their likeness. Piper prefers to hang out in the master bathroom, which is actually a converted bedroom with a stand-alone bathtub and, of course, a working fireplace. Her favorite spot is the early 20th-century needle shower, essentially an old-fashioned whirlpool with tiered jets, where she often waits patiently for a good scrub-down.

Christopher Sturman
The master suite takes up the entire third floor, with the bedroom at one end that connects to the bathroom by way of a meticulously organized, walk-through closet. “Kind of the gay couple’s ultimate fantasy town house,” Senk says with a laugh. “The first morning I woke up here, Keith was downstairs making coffee, and I hadn’t come down. It was 7:15, then 7:45, and at 8:15 he came up and asked, ‘What are you doing?’ And I was just so in love with this room, I didn’t want to leave.” Which was precisely what Johnson had in mind. “It’s been unbelievable what he’s done,” Senk adds. “I felt like I’d lived here my whole life after three days.” Johnson describes the renovation process as “so much fun, I think I want to do another one.” In fact, the house has become an unofficial showroom for friends, who have inquired about commissioning him for future jobs, and he’s contemplating doing a book on interiors. But one thing is for sure: They aren’t moving again. “We’re planning on being here for quite some time, knock on wood,” says Senk. He looks down at the kitchen’s countertop, which is made of 19th-century Pennsylvania marble reclaimed from a park in front of Philadelphia’s Independence Hall, and thinks better of it. “Scratch that. Knock on marble.”

Stable, a video work by Kathleen Herbert in the foyer, as well as terra-cotta sculptures of a dog and a fox that originally decorated the roof of an Irish country house The dining room murals evoke the undulating molded-plaster walls of Gertrude Vanderbilt Whitney’s sculpture studio, located nearby The sitting room, with Lucian Freud’s Head of an Irishman above the mantel Senk and Johnson in the library The library’s Gothic bookcase is from Jamb in London The master bathroom An iron sculpture by Pierre Malbec in the living room Skibo and Piper in the master bathroom’s antique needle shower Skibo occupies the throne beneath a holographic portrait of Queen Elizabeth by Chris Levine “At first Keith said he only wanted to renovate the kitchen, and I thought Yeah, whatever, we’ll see about that.” —Glen Senk