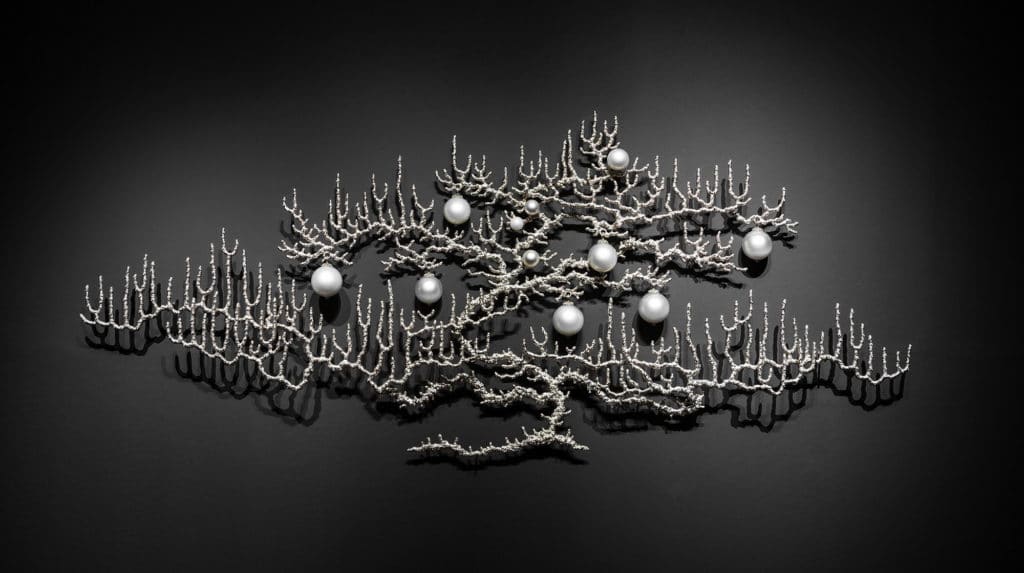 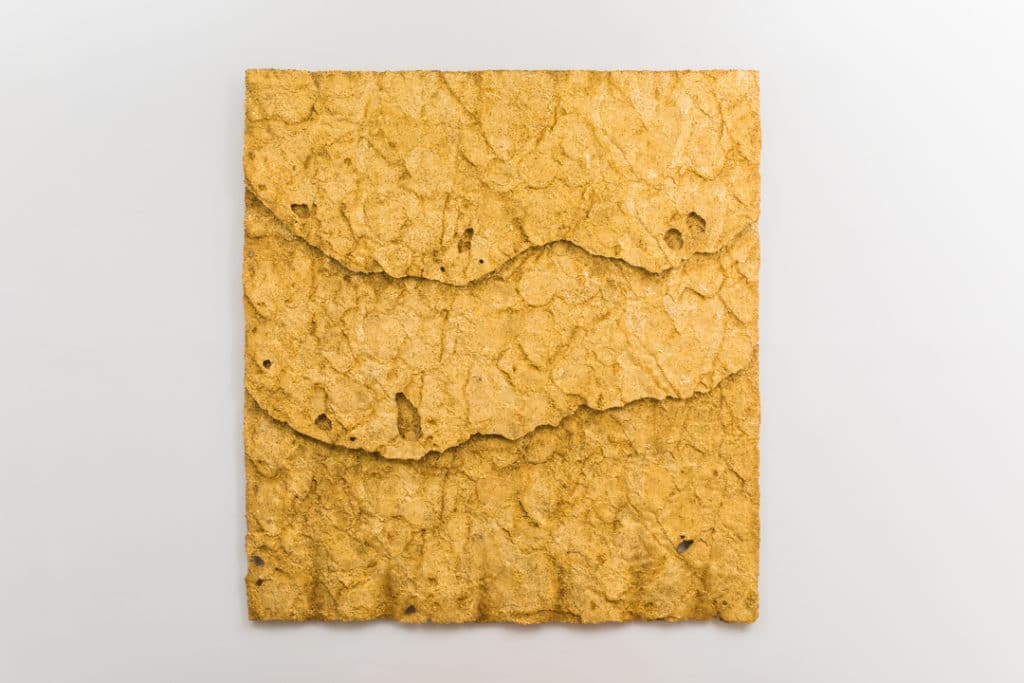 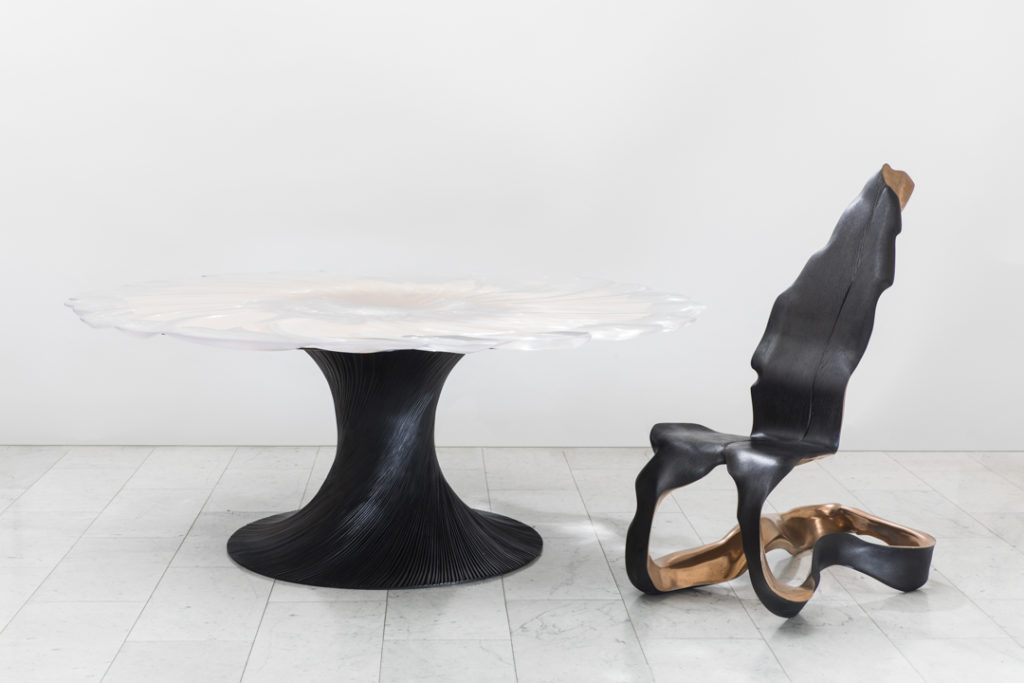 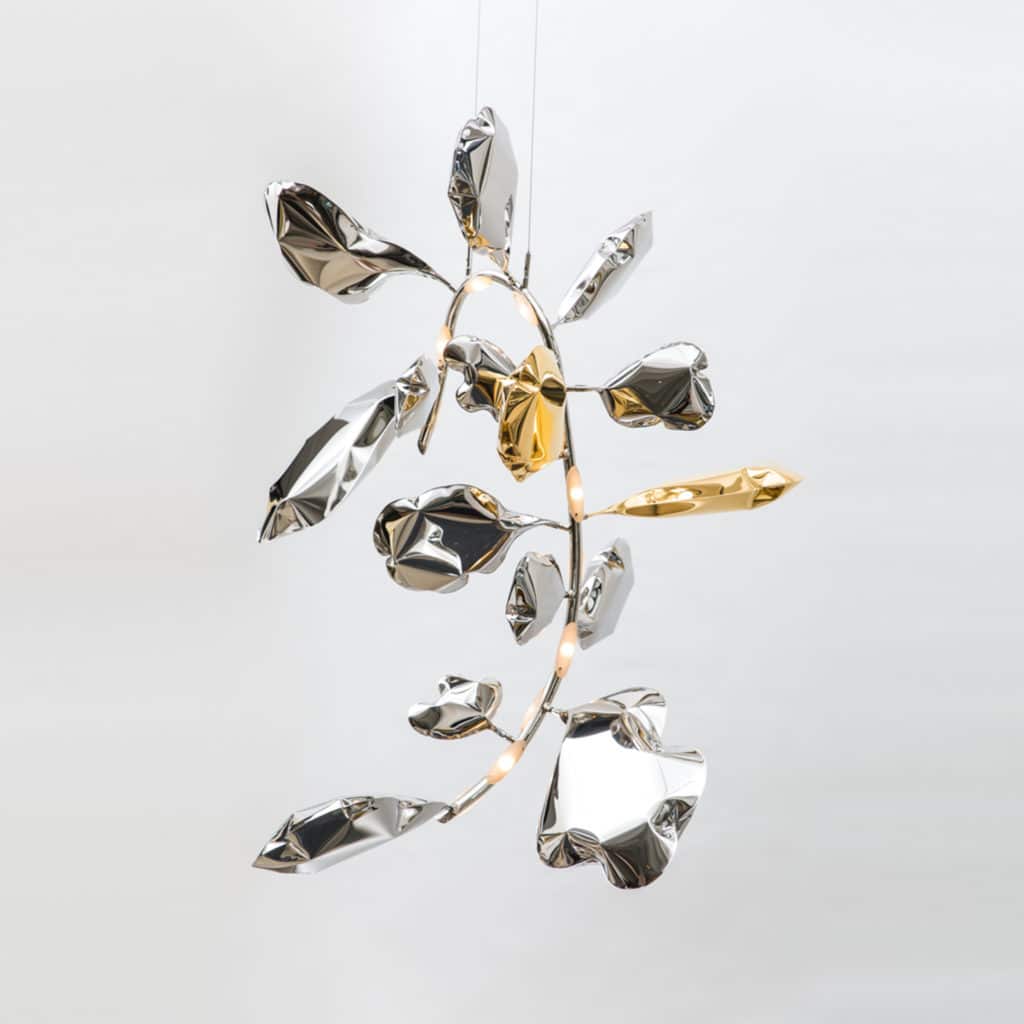 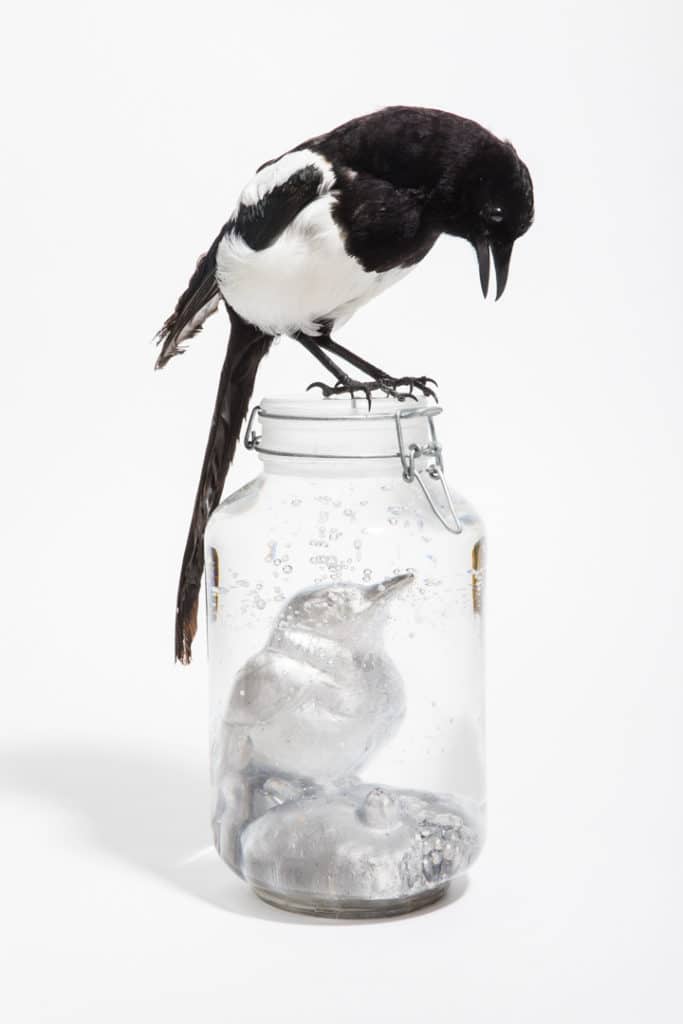 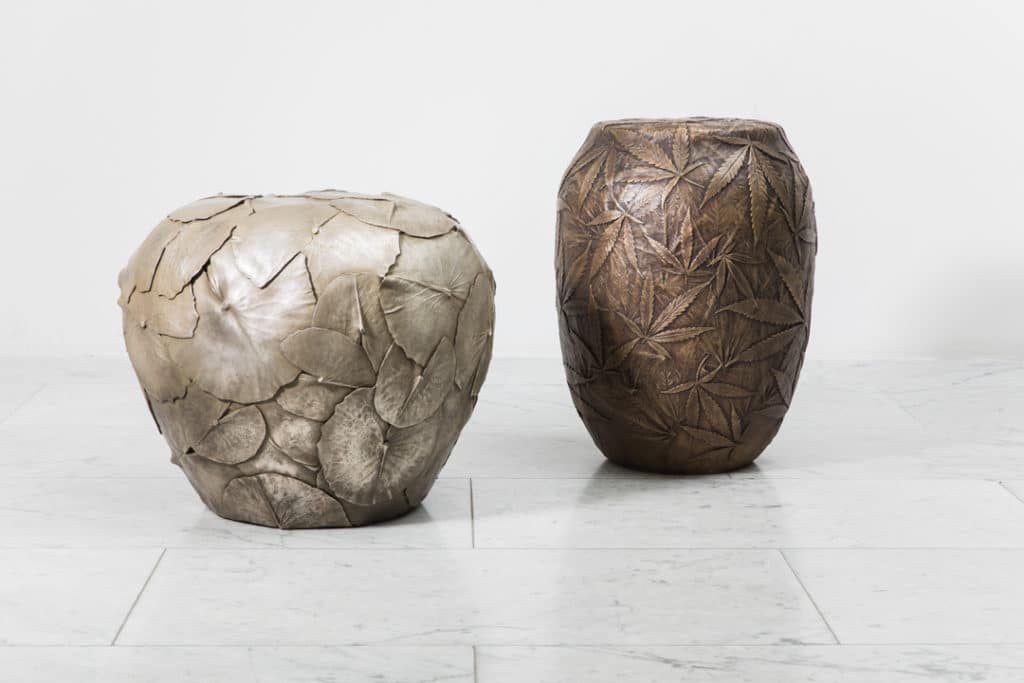 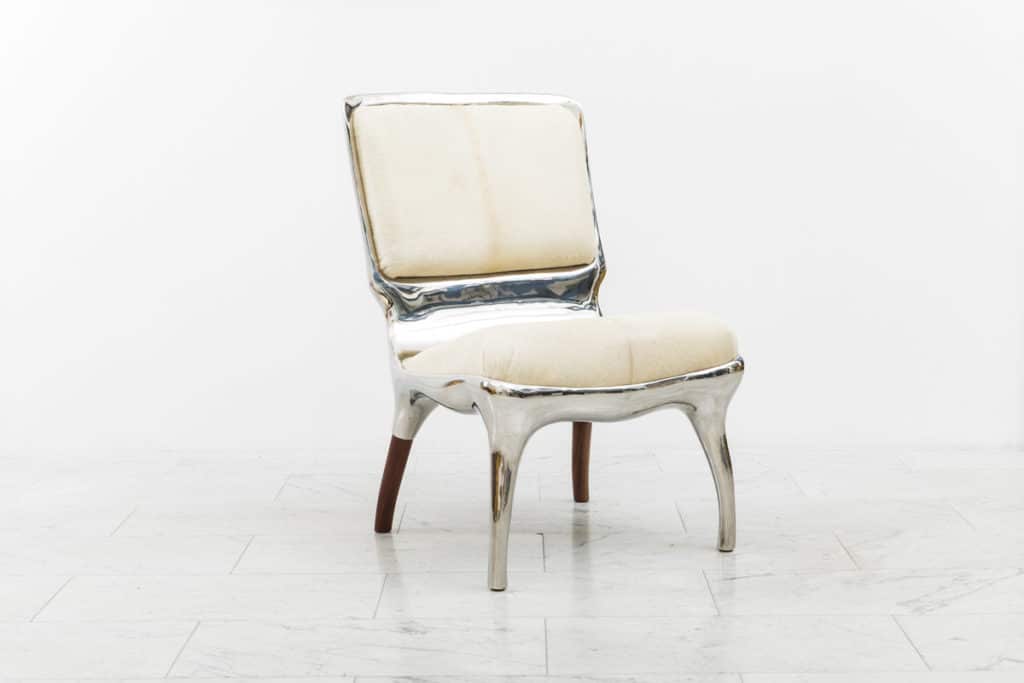 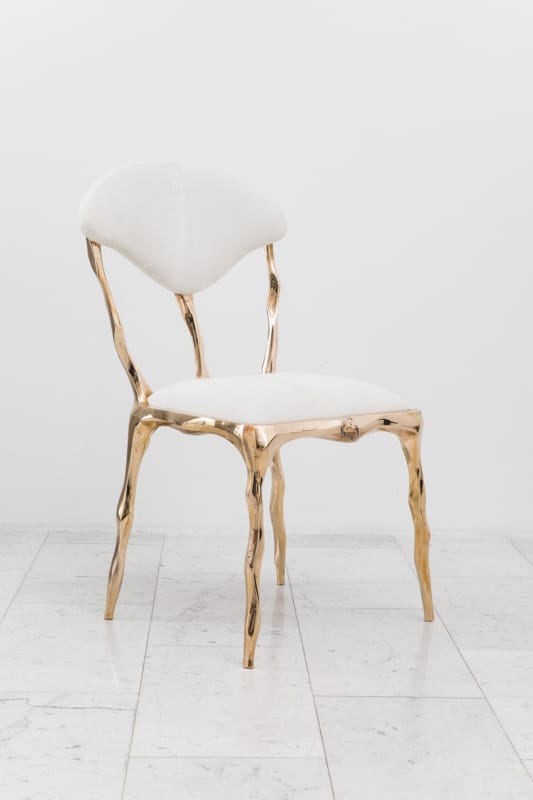 Todd Merrill Studio is exhibiting an eclectic survey of material-driven works from 11 contemporary artists. This tightly curated selection takes inspiration from historic design, specifically a Victorian fascination with natural curiosities and ornamentation.  Working across diverse art and design disciplines, the works shown are definitive of the 21st century while incorporating traditional techniques and processes.

Anchoring the exhibition, two works by TIMOTHY HORN showcase the artist’s inspiration derived from elaborate European art styles such as Baroque, Rococo and Empire. For the past decade, Horn has been inspired by 17th-century jewelry patterns by Gilles Legaré, court jeweler to Louis XIV.  Stardust and Moonlight, straddles several disciplines and draws from a broad bank of skills, including blown glass, cast lead crystal and various metals. Beginning with the silhouette of an historical piece of jewelry projected at a much larger scale, Horn drafts a working pattern with the addition of his own influence and imagery. He then sets about fabricating a tree-like structure in wax, to be cast in bronze and nickel-plated. Pearls become large baroque forms in mirrored blown glass.

Recently on loan to the Powerhouse Museum alongside artists Alexander Mc Queen, Kate Rohde and Timorous Beasties, Gorgonia 12 (shown above), (Latin for a genus of soft coral), is inspired by the natural beauty of a sea fan. Horn has fashioned a series of monumental sculptures out of nickel-plated bronze from which he hangs teardrop-shaped globes of mirrored blown glass. “These pieces are hybrids: at once jewel-like but also crusty,” he explains. “It’s all about taking things out of context and putting them into my own context.”

Artist SOPHIE CORYNDON‘s works combine traditional decorative arts techniques with a foundation in the natural world. Recent works of Coryndon’s explore the exquisite nature of honeycombs using cast bronze, gilded plaster, and precious and semi-precious stones. She became interested in bees after learning about the current global crisis facing the insects. In an effort to capture abandoned “ghost ship hives,” Coryndon employs the lost-wax method, an ancient and labor-intensive technique.

Dossel (shown left), a large-scale wall hanging, is composed of panels of layered, cast Jesmonite honeycomb, which have been gilded with 24ct. gold.  The overlapping layers of the panels hang, emulating luxurious ornate textiles. At once colossal and delicate, Dossel beautifully preserves the fragility of its source material. Dossel is the term for an ornamental cloth suspended behind an altar, often attached to the wall behind. It is sometimes referred to as an alter screen. Coryndon’s Dossel is inspired by the Pala d’Oro a golden altarpiece of the treasury of S.Marco, Venice.

In the past decade the name MOLLY HATCH has become synonymous with contemporary ceramics.  Hatch’s ceramic installations, inspired by historical decoration, have been exhibited and collected all over the world and have garnered her a loyal and fervent following. Using ceramic surfaces as her canvas Hatch extends her historically-inspired contemporary repertoire with Memorandum (shown left), a wall installation comprised of 70 hand-painted plates.  The central image of the work, a large vase of vibrantly painted flowers is derived from 17th century Dutch painting, more specifically “pronkstilleven” (Dutch for ‘ostentatious still life’). Each round surface serves as a canvas for the artist’s brush strokes; together, the plates reveal the intricate abstract floral motif of their source material.

In 2017, New York designer DOMINICK LEUCI met Todd Merrill whereupon he proposed the concept of a cohesive collection of LED sculptures derived from nature but incorporating modern design techniques and innovative materials.  After a year of development, Todd Merrill Studio is introducing the first of Leuci’s Eques’ Series, the first work of its kind to incorporate air inflated metal forms with LED lighting.   The Eques Series (shown right) is inspired by the mystical appearance of the Sea Dragon (Phycodurus Eques).  Sea Dragons appear to be flora, keeping them indistinguishable from seaweed. Their graceful wing-like bodies provide an illusion of a creature in flight or dance, despite being rigid in nature. Working with LEDs and custom made air blown plumes of stainless steel, each sculptural element is set in place to convey a sense of movement.  The plumes reflect light from the body, as well as the surrounding environment, adding another layer of mystery and surprise. Appearing to defy gravity, ‘Eques’ has a buoyant sense of being suspended in water or gliding through air.

British born artist, JOANNA MANOUSIS lives and works in the United States, creating sculptural objects and installations in glass and mixed media. It would be easy to describe her as a “glass artist” and certainly many have. Glass, is indeed, the primary medium of Manousis’ work, yet the categorization is short sighted. She has mastered control of the medium, manipulating it through a multi-disciplinary process that often incorporates other materials such as cast bronze, enamel, and taxidermy.  Her works are multifaceted, rich in history and symbolism, often challenging the viewer with a distorted sense of feminine domesticity and self reflection.

On view, Fertile Ground consists of full size taxidermy peacock, encrusted with glass succulent cacti that appear to be growing from bird’s feathers. Here both flora and fauna are shells of what the living entities once were. The bird acts as a pedestal for its excessive adornment, which in turn explores the relationship of what is real, and what is mimicry.  With Distilled Portrait (shown left) the interior of a solid, cast crystal distillery jar contains the negative space of a magpie sitting on a pomegranate. Gilded with silver nitrate, the residual detail is transformed into a three-dimensional mirror reminiscent of cast metal. A taxidermy magpie sits on top of the jar peering intently at what seems to be its reflection within. Believed to be one of the most intelligent of all birds, the magpie is one of the few species known to be able to recognize itself in a mirror.

In the Flora and Fauna Series (shown left), Sullivan immortalizes the intricacies and delicacy within the natural world by hand-sculpting each individual component, building layer upon layer to form the work into a wax model. The wax sculpture is then cast in bronze using the lost wax method. At once functional objects and works of art, Sullivan’s pieces are defined by their intricate surfaces and the versatility of their forms.

Roskin notes: “I try with each piece to create a stance and a presence, some with more contrapposto. I aim to give each piece a feeling it is inhaling or ready to make a move. I try to steer clear of the decorative, but rather to draw on mass, volume, line, negative space, and my love of materials and the craft of working with them.”

Marc Fish’s unique Vortex Table is constructed from over 2000 hand-cut oak and sycamore veneers, carbon fiber, and nearly 300 pounds of poured resin.  The poured resin top is hand carved, sanded and highly polished until crystal clear, in a swirling, centrifugal direction, mimicking the twisted form of the table’s base.  Expanding on his reputation for logic defying works, The Vortex Table is at once a functional object and an sculptural anomaly.  Fish was inspired by the dynamic energy of vortexes whether they are descending into whirl pool or ascending in a tornado. The Vortex Table captures this energy and becomes a physical representation of this natural phenomena.  The hand-carved table top also gives the impression of the patterns that the ocean creates on a sandy beach when the tide goes out. The carved resin underside distorts the look of the sycamore veneer making it appear undulating like sand dunes.

While the curvilinear forms of Fish’s works harken back to Art Nouveau, his process pushes the limits of 21st century furniture design. His sublimely unique works possess a timelessness that could be found seamlessly in the most contemporary of settings to the most traditional.

Dubuting at Salon will be Haase’s Sculpted Bronze Dining Chair. Taking inspiration from the twisting forms of seaweed and other natural materials, Haase hand-carves each element of his unique dining chair before casting it in his New York City studio.  The bronze components are then welded together by the artist and polished to a mirror finish. Shown upholstered in white pony hair, the chair can be upholstered in a variety of materials. The back plate can also be created in hand carved wood.