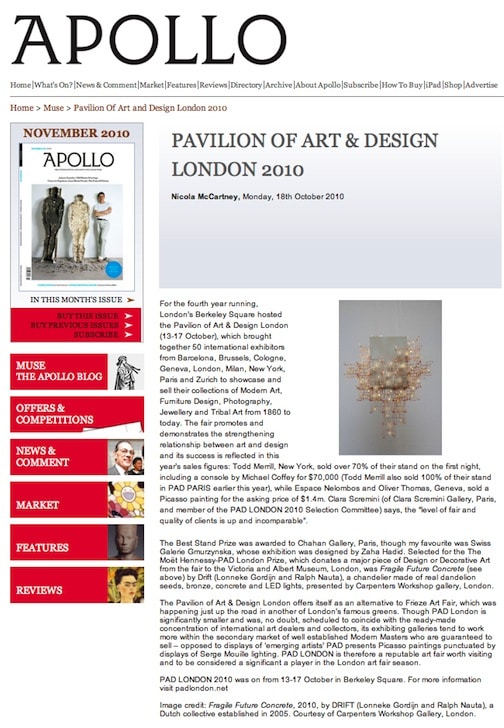 For the fourth year running, London’s Berkeley Square hosted the Pavilion of Art & Design London (13-17 October), which brought together 50 international exhibitors from Barcelona, Brussels, Cologne, Geneva, London, Milan, New York, Paris and Zurich to showcase and sell their collections of Modern Art, Furniture Design, Photography, Jewellery and Tribal Art from 1860 to today. The fair promotes and demonstrates the strengthening relationship between art and design and its success is reflected in this year’s sales figures: Todd Merrill, New York, sold over 70% of their stand on the first night, including a console by Michael Coffey for $70,000 (Todd Merrill also sold 100% of their stand in PAD PARIS earlier this year), while Espace Nelombos and Oliver Thomas, Geneva, sold a Picasso painting for the asking price of $1.4m. Clara Scremini (of Clara Scremini Gallery, Paris, and member of the PAD LONDON 2010 Selection Committee) says, the “level of fair and quality of clients is up and incomparable”.

The Best Stand Prize was awarded to Chahan Gallery, Paris, though my favourite was Swiss Galerie Gmurzynska, whose exhibition was designed by Zaha Hadid. Selected for the The Moët Hennessy-PAD London Prize, which donates a major piece of Design or Decorative Art from the fair to the Victoria and Albert Museum, London, was Fragile Future Concrete (see above) by Drift (Lonneke Gordijn and Ralph Nauta), a chandelier made of real dandelion seeds, bronze, concrete and LED lights, presented by Carpenters Workshop gallery, London.

The Pavilion of Art & Design London offers itself as an alternative to Frieze Art Fair, which was happening just up the road in another of London’s famous greens. Though PAD London is significantly smaller and was, no doubt, scheduled to coincide with the ready-made concentration of international art dealers and collectors, its exhibiting galleries tend to work more within the secondary market of well established Modern Masters who are guaranteed to sell – opposed to displays of ‘emerging artists’ PAD presents Picasso paintings punctuated by displays of Serge Mouille lighting. PAD LONDON is therefore a reputable art fair worth visiting and to be considered a significant a player in the London art fair season.

PAD LONDON 2010 was on from 13-17 October in Berkeley Square. For more information visit padlondon.net