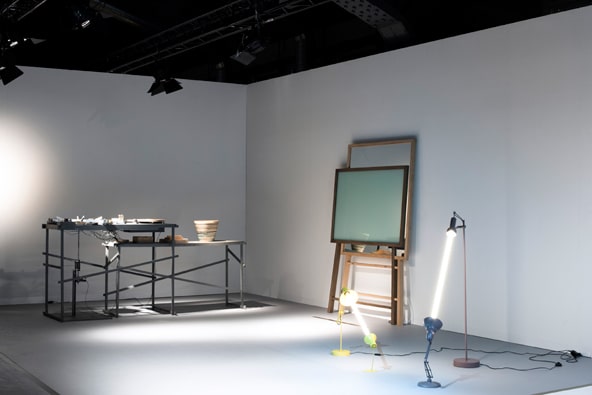 Vienna-based Mischer’Traxler, one of the three design studios chosen by W Hotels for its Designers of the Future Award, addressed the theme of “Conversation Pieces” with a machine that works better the more people there are gathered around it; a mirror that only reflects when two or more people are watching it; and pairs of lights that “converse” via their light sources. 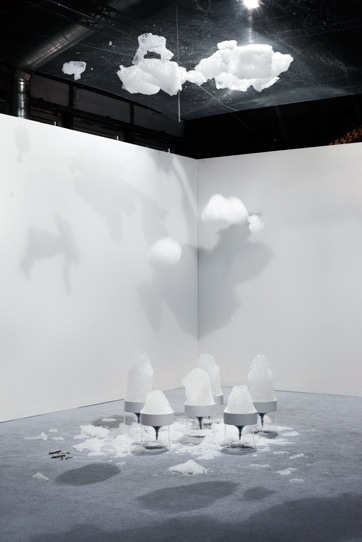 Asif Khan of Britain, the second of the Designers of the Future Award winners, showed “Cloud,” an installation in which helium gas, water and soap combined to create clouds that rose to the ceiling to create patterns of light and shade on the floor 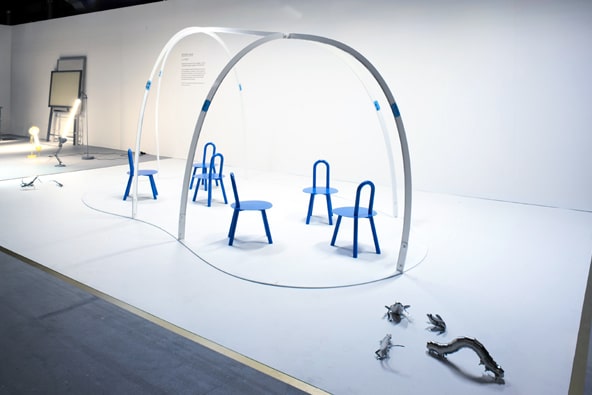 Studio Juju of Singapore, the third of the Designers of the Future Award winners, explored the idea of conversation by creating a metal-framed virtual tent, which defined a conversation space (filled with chairs of their own design), while not constricting it. 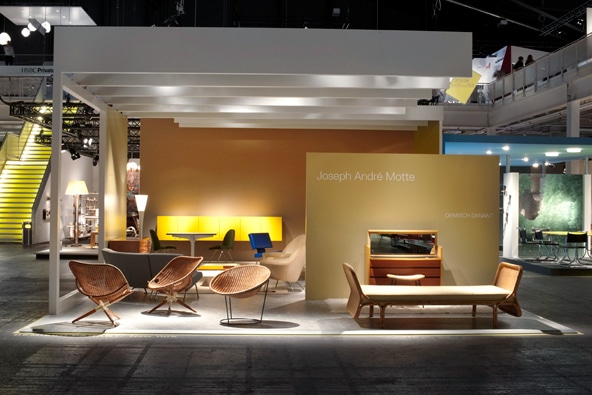 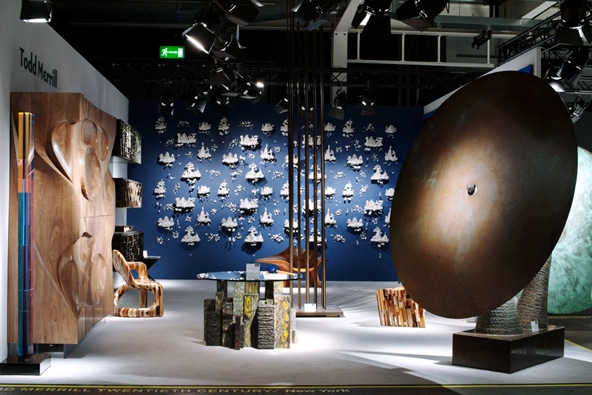 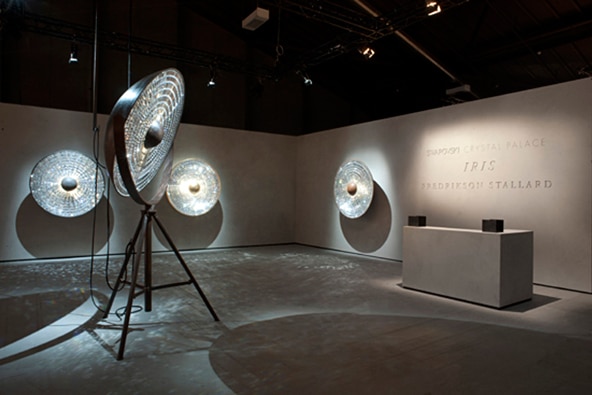 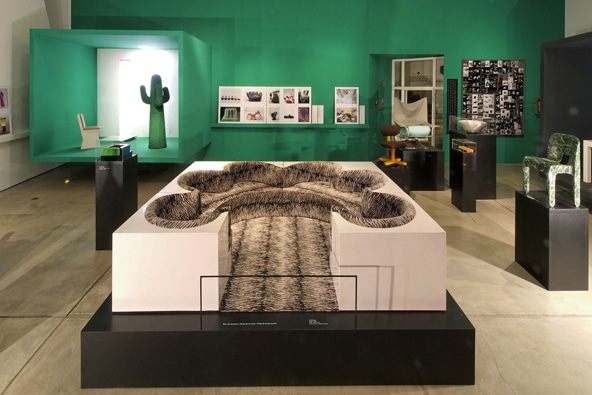 At the Vitra Design Museum, the exhibition “ZOOM: Italian Design and the Photography of Aldo and Marirosa Ballo” featured not just photographs by the famous duo but also objects by the great names in Italian design.

Last week professionals, collectors and amateurs of all things art flocked to Basel for the 42nd edition of Art Basel, the “world’s top contemporary art fair.” While the main fair was received with mixed reviews (too crowded, confusing layout, not enough outstanding pieces), an entirely different tune was sung over at Hall 5 of Basel’s venerable Messegelände, where only a day earlier Design Miami opened the doors to its annual sister fair, Design Miami/Basel, a satellite fair specializing in collectible design. There was a noticeable excitement in the air as this was the first Design Miami/Basel under the new directorship of Marianne Goebl. Her debut did not disappoint: a record 43 exhibitors showing everything from 20th-century classics to contemporary designers, intelligent design collaborations with corporate sponsors (take note, Art Basel V.I.P. lounge), a great bookstore (courtesy of doyoureadme?! from Berlin) and a well-curated series of talks (full disclosure: I moderated one of them). Design Miami/Basel may keep flourishing thanks to the cross-pollinating effect from the neighboring art fair(s), but judging by the increasingly educated and design-passionate public, it seems that the fair could very well stand on its own if it had to.

Among the most exciting things to see (and still considered the most adventurous to buy, for collectors) were the many outstanding contemporary design pieces, some of which were presented as solo exhibitions. Max Lamb, for example, showed his China Granite II series (complete with accompanying book ) in a beautifully serene booth by New York’s Johnson Trading Gallery. Also going solo was the Dutch designer Piet Hein Eek, whose delicately clunky benches and tables of wood and steel made up Rossana Orlandi’s booth. (Orlandi also did an installation with Nacho Carbonell, “The Playground Closes at Dusk,” which greeted the fair’s arriving visitors.) Some of the other contemporary solo-show highlights included Galerie Kréo’s strangely surrealist mini-collection by Pierre Charpin; Gallery Libby Sellers’s presentation of Formafantasma’sconceptual “Colony” textiles; and a selection of pieces of Studio Makkink & Bey’s Crate Series, on view at Spring Studios.

Nina Yashar’s gallery Nilufar in Milan is equally versed in historical as well as contemporary design, and her booth in Basel this year embodied the same approach: alongside design classics by Albini, Ponti and Carlo Scarpa, Yashar brought her best contemporary design show horses out to play: Martino Gamper, Studio Nucleo, the sculptor Giacomo Ravagli and the rising star Bethan Laura Wood, whose Pyrex lamps and elaborate laminate inlay furniture had already made a big impression during Milan Design Week in April.

Perhaps Nilufar’s colorful mix and the dialogue it creates between old and new is emblematic of Design Miami/Basel as a whole, a place where the laureates of the W Hotels-sponsored Designers of the Future Award — Asif Khan (UK), Mischer’Traxler (Austria)and Studio Juju (Singapore) — complement the more expected 20th-century blue-chip collectibles. Those were mostly represented by the work of Jean Prouvé and Jean Royère, respectively. Galerie Chastel-Maréchal, Galerie Downtown François Laffanour and Galerie Jacques Lacoste all had outstanding Royère pieces in their selection; in fact, it was the only thing Lacoste showed. Meanwhile, Jousse Entreprise and Galerie Patrick Séguin devoted themselves entirely to the power of Prouvé: the former by showing Prouvé furniture, against the backdrop of red armatures from the designer’s Ecole de Villejuif (1957); the latter by going as far as setting up a 20-foot-by-20-foot demountable Prouvé house from 1944, complete with impressive documentation through original books and construction paraphernalia, all of which was showcased in glass vitrines. Séguin even went as far as installing, and deinstalling, the house every day, with four handsome Frenchmen. (No word whether César, Thomas, Josquin and Fabrice can be purchased along with the house.)
But some surprising discoveries could be made even among the vintage pieces: Joseph André Motte, for example, a somewhat forgotten figure of postwar French design, was paid long-overdue respect at Demisch Danant, where a mix of Motte’s private and public commissions could be purchased (or simply admired); R20th Century from New York showed some beautifully executed and rather colorful chairs by Joaquim Tenreiro, commissioned for a home in Rio de Janeiro, Brazil in the late 1940s and early 1950s; and Todd Merrill stunned visitors with two larger-than-life 1970s sound sculptures by Harry Bertoia (designer of the famously delicate Diamond Chair) that were taller and bigger — and probably way heavier — than anything else on view at the fair.

Tall, big and sparkly was Fredrikson Stallard’s installation for Swarovski Crystal Palace, shown for the first time at Design Miami/Basel after being lured away from Milan Design Week. The British design duo, whose work was also present at the David Gill’s booth, conceptualized four wall-hung light pieces made of crystal and steel that resemble the iris of the human eye (hence “Iris,” the installation’s name). The designers’ goal was to “take away some of the glitziness of the crystals,” explained Patrik Fredrikson, something they achieved by using indirect lighting. The result is far more subdued than what you would usually expect from the world’s biggest manufacturer of crystals; the effect of the light’s refraction and projection is all the more beautiful for it.

If, overall, Design Miami/Basel’s main fair is bigger than its Miami sister, the number of collateral design events not directly linked to it is comparatively smaller — mostly because Basel does not have a designatedDesign District. But before anyone could seriously bemoan the lack of opportunity for independent design opening-hopping, Vitra jumped in to save the day with an all-out garden party on Wednesday night that also served as the official opening for four independent exhibitions and presentations on the furniture manufacturer’s architectural theme park of sorts, the famous Vitra Campus. Visitors were first invited to the Zaha Hadid-designed firehouse to contemplate Prouvé RAW, an unexpected collaboration between Vitra and the Dutch denim house G-Star. What sounded peculiar (at best) on paper turned out to be a thoughtful, tasteful re-edition of some of (you guessed it) Jean Prouvé’s most prized designs, with very minimal alterations (in color, fabric and construction) to Vitra’s existing Prouvé line. For all those purists who still suspected idol desecration, G-Star’s creative director Shubhankar Ray repeatedly insisted that the estate of Jean Prouvé had meticulously approved all changes.

Further down the street, past a Prouvé-designed former gas station (which that night served as a D.J. booth, complete with disco ball — speaking of desecration …) guests were invited to roam the much-lauded VitraHaus, designed by Herzog & deMeuron, which opened last year. Inside, Maharam’s Digital Projects wallpapers by artists and designers like Sarah Morris, Francesco Simeti, Karel Martens and Maira Kalman provided a fitting backdrop for Vitra’s painstakingly decorated furnished environments. But the real highlight was waiting at the Frank Gehry-designed Vitra Design Museum across the lawn: “ZOOM: Italian Design and the Photography of Aldo and Marirosa Ballo,” an exhibition that featured an abundance of spectacular designs — in print and in real life — by some of the greatest names in Italian design, inluding Albini, Aulenti, Bellini, Castiglioni, Colombo, Mendini, Pesce, Ponti, Superstudio, Sarfatti and Sottsass. In fact, Sottsass received a special mention of sorts through a small side exhibition of enamels that he made in 1958 (and which looked thoroughly contemporary) and a mini-showcase of the Memphis movement, of which he was the co-founder. The three shows, put together under the aegis of the Design Museum’s new director, Mateo Kries, made for a beautiful explosion of color, shape and sometimes refreshingly bad taste. It also got some visitors started on a guessing game over which of the designs might make it into the much-anticipated “Postmodernism” show at the Victoria & Albert Museum this fall. It’ll be interesting to see when the vibrant energy of this fairly recent period in design will move out of museums and find its way into the booths at Design Miami/Basel and into collectors’ homes.