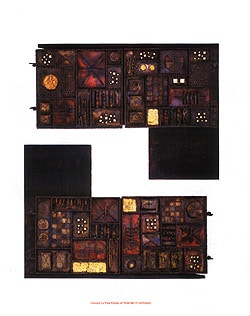 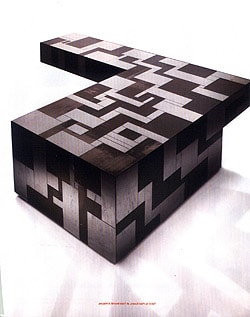 Table and Desk by Paul Evans, at Todd Merrill Antiques 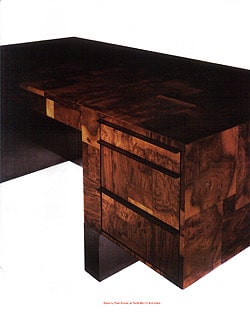 Table and Desk by Paul Evans, at Todd Merrill Antiques

FOR MOST OF US, the phrase seventies decor brings to mind beanbag chairs, avocado-green wall-to-wall carpeting, and hard-candy plastics. But while the Disco Decade certainly had its share of schlock, it also bore artful furniture from designers like Paul Evans, Vladimir Kagan, Karl Springer, and Philip and Kelvin Laverne that is currently enjoying a renaissance–and has hawkeyed collectors rooting around basements from Long Island to Palm Springs.

The hallmarks of the haute seventies style are highly polished metals, expensive burled woods, precious animal skins, and maybe a Lucite leg or two. They are the fixings for swanky bachelor pads, like that of Tom Ford, who helped nudge Kagan back into the spotlight when he accessorized his Gucci stores with the designer’s sectional seating. “You look at some of these coffee tables, and you can imagine the Studio 54 crowd doing lines off them,” says Jim Walrod, the design consigliere who outfitted the Standard hotel in Los Angeles and the Park restaurant in Manhattan.

The revival of the coke-era aesthetic comes on the heels of a saturation point in the mid-century modern market. In today’s excitable climate, an Eames rocker reproduction holds, in some cases, the same value as the real thing. And with a classic Prouve desk commanding six figures, it was only a matter of time before design hounds looked to the Saturday Night Fever generation for more affordable treasures.

“Paul Evans was an artist” says Todd Merrill, owner of the eponymously named furniture store in SoHo. “Each of the pieces he crafted is unique like a sculpture, so it’s a two-for-one deal. You’re getting art and furniture.”

And your pockets don’t want to overdo it–choose one striking collectible to anchor a room. Plant a Verner Panton marshmallow chair next to your plasma screen, for example, and suddenly your living room is a tableau out of 2001: A Space Odyssey. And while a Vladimir Kagan lounge chair is plush enough for the penthouse, its simple lines mean it also looks at home in a more humble fourth-floor walk-up.

Wherever you put one of these pieces, the furniture’s refined pedigree means it’s bound to appreciate in value. You’re getting a collectible artifact for relative peanuts. “These are not off-the-shelf,” says Evan Lobel, a modern-furniture dealer in New York. “They were expensive back then, so when you are paying $8,000 to $10,000 for a Springer piece, dollar for dollar it’s cheaper than it was originally.” Tell that to the snooty aesthetes still talking up their bank-breaking Corbusier sofa.