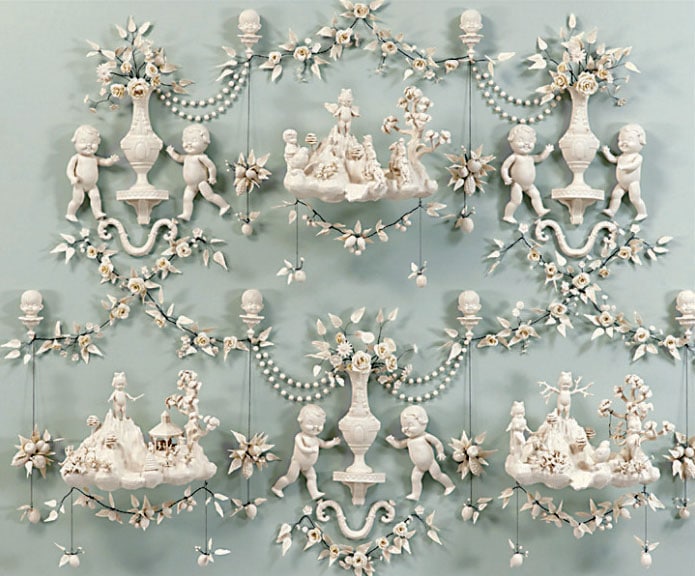 “Girls at War” (2013), detail from _by Beth Katleman, _part of the exhibit “Tchotchke: The Mass-Produced Sentimental Object in Contemporary Art” at Kenyon College’s Gund Gallery

GAMBIER, Ohio — The relationship between humans and mass-produced stuff can get personal, whether the item is a long-wished-for luxury or a small, poorly mass-produced objet d’art — a tchotchke.

Through memories of family or place, such items develop individual sentimental values that far surpass their functionality or monetary worth.

The unique, multilayered relationship and the questionable taste and technique that the knickknacks can represent have become points of fascination for contemporary artists such as Jeffrey Vallance and Liliana Porter. The work of these and similarly focused artists is featured in the exhibition “Tchotchke: Mass-Produced Sentimental Objects in Contemporary Art” at the Gund Gallery of Kenyon College.

Several distinct approaches to the subject are represented — including the direct route taken by Vallance and Patrick Jackson.

Vallance levels the playing field between low and high art — and raises the irony level of the exhibit — by presenting a Bible blessed by Thomas Kinkade and purchased at a retail store dedicated to the licensed products of the commercial artist.

Jackson also eschews a sense of hierarchy as he elevates the cheap ceramic sculptures he adopts into the functional realm. In his “Tchotchke Stack” works, a fascinating assortment of items comes together to provide corner supports for glass shelf units — from Christian iconography to colorfully painted clowns and to a small replica of Michelangelo’s David.

In assemblages by Betye Saar such as Globe Trotter and Weight of Time, vintage keepsakes featuring African-American stereotypes are re-contextualized to illuminate the dark history behind them.

The mixed-media work of Porter reflects a witty manifestation of the tendency to anthropomorphize such inanimate objects. She builds contained universes from flat pieces of paper and the tiny figures used in architectural models, and makes marks on the paper to suggest action — such as the splatter of yellow paint that a small worker with a broom pushes away in To Clean Up (Yellow).

The show concludes with a faux marketplace created by Yoko Inoue. Filled with ceramic hybrids of Buddha, Mickey Mouse and Hello Kitty, it conjures up thoughts of what one might find in the keepsake collection of Dr. Moreau.