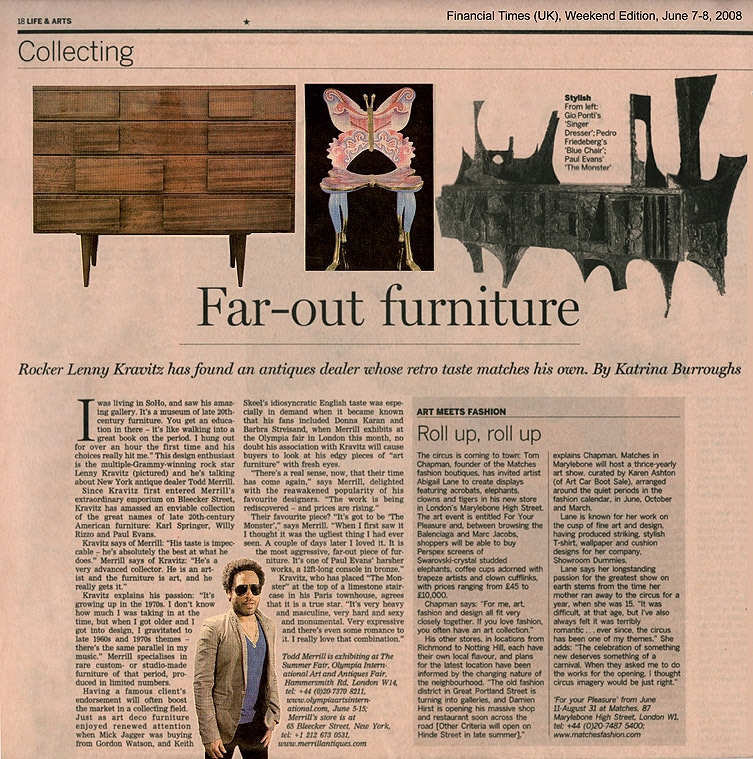 I was living in SoHo, and saw his amazing gallery. It’s a museum of late 20th-century furniture. You get an education in there – it’s like walking into a great book on the period. I hung out for over an hour the first time and his choices really hit me.” This design enthusiast is the multiple-Grammy-winning rock star Lenny Kravitz and he’s talking about New York antique dealer Todd Merrill.

Kravitz says of Merrill: “His taste is impeccable – he’s absolutely the best at what he does.” Merrill says of Kravitz: “He’s a very advanced collector. He is an artist and the furniture is art, and he really gets it.”

Kravitz explains his passion: “It’s growing up in the 1970s. I don’t know how much I was taking in at the time, but when I got older and I got into design, I gravitated to late 1960s and 1970s themes – there’s the same parallel in my music.” Merrill specialises in rare custom- or studio-made furniture of that period, produced in limited numbers.

Having a famous client’s endorsement will often boost the market in a collecting field. Just as art deco furniture enjoyed renewed attention when Mick Jagger was buying from Gordon Watson, and Keith Skeel’s idiosyncratic English taste was especially in demand when it became known that his fans included Donna Karan and Barbra Streisand, when Merrill exhibits at the Olympia fair in London this month, no doubt his association with Kravitz will cause buyers to look at his edgy pieces of “art furniture” with fresh eyes.

“There’s a real sense, now, that their time has come again,” says Merrill, delighted with the reawakened popularity of his favourite designers. “The work is being rediscovered – and prices are rising.”

Their favourite piece? “It’s got to be ‘The Monster’,” says Merrill. “When I first saw it I thought it was the ugliest thing I had ever seen. A couple of days later I loved it. It is the most aggressive, far-out piece of furniture. It’s one of Paul Evans’ harsher works, a 12ft-long console in bronze.”

Kravitz, who has placed “The Monster” at the top of a limestone staircase in his Paris townhouse, agrees that it is a true star. “It’s very heavy and masculine, very hard and sexy and monumental. Very expressive and there’s even some romance to it. I really love that combination.”