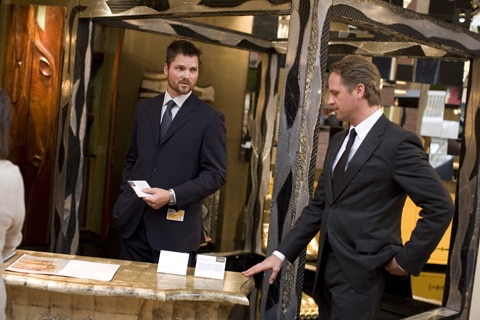 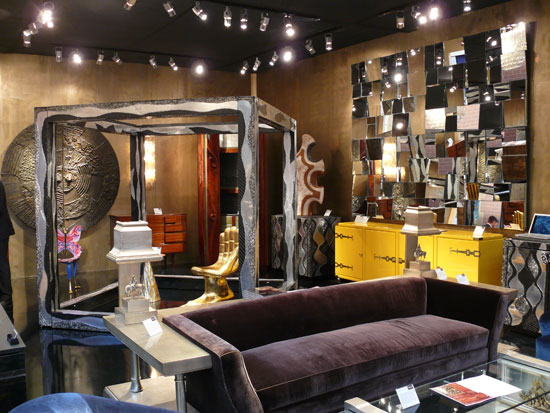 Edging into its 40s while jostling for major-league attention, the Olympia International Art & Antiques Fair in London, June 5-15, 2008, sports a remarkably new-era guise, as contemporary and 20th-century design now take a dominant position among the predictable brown furniture, portrait miniatures on ivory and equestrian paintings presented by over 260 dealers. With that fresh injection of stylish, hipster antiques, including a BSA 650 cc A10 Golden Flash motorcycle from 1952 with dealer Manfred Schotten of Oxfordshire (which sold in a nanosecond), the Olympia fair emerges a winner on the increasingly crowded global art-fair circuit.

For one thing, the setting in an 1886 tour de force exhibition hall of steel and glass with 40-foot-tall ceilings is stunning, and for another, the gallery booths command attention from the savviest of style connoisseurs, as they rival Hollywood sets. There’s Van Gelder with a stand entirely sheathed in Schiaparelli pink felt showcasing Mughal jewels. Finch & Co. presents its tribal art, ethnography and kunstkammer objects against walls fashioned from a curtain of chain mail dangling from 14-foot heights.

The venerable Mallett, which was founded in 1835, presented an homage to Willy Rizzo, who is now in his 80s. As a Paris Match photographer, Rizzo fixed his lens on every major star before later turning to designing furniture in stainless steel. Mallett clothed its entire stand in a Photoshopped Willy Rizzo self-portrait and packed its space with Rizzo’s singular brand of chic furnishings along with his Hollywood photographs.

And Koopman, dealers in fine 18th-century English silver, erected a faux Georgian brick building with granite trim. Such presentational flair makes cruising the aisles at Olympia endlessly enticing, distinguishing itself from the staid “been there, done that” look of other traditional shows.

And, what’s on offer is right in sync with today’s quirky taste, ranging from Pleistocene skeletons at Fossils to early ikat tie-dye textiles with Joss Graham. The with-it dealers mix 20th century wares with period antiques.

And that mélange brought out the decorators in droves from both sides of the pond. There was New York’s Tony Ingrao, who is now designing up two homes outside Moscow at a cost of $12 million each. Susan Gutfreund was shopping with client in tow, as were Scott Snyder and others. Also taking in the fair was U.S. Ambassador to the Court of St. James, Robert Tuttle, whose modern and contemporary art holdings are major league.

A stunning 5,000 turned out for the vernissage held on Thursday, June 6, and the following day attendance rose 39 percent over the prior year. Even as Wall Street tanked and lost a frightening 395 points on Friday, that financial bellwether had nary an effect on the Olympia fair, which has cleverly reinvented the dowdy model of purveyor of 18th-century antiques. Olympia fair organizer Freya Simms managed to pluck some of the crème de la crème of haute dealers straight away from Olympia’s main competitor, the Grosvenor House Art & Antiques Fair, which opens June 12-18, 2008.

One defector is Antoine Cheneviere of London, who incorporates 20th-century chairs and a 1960s Murano glass chandelier in a Tiffany blue with its selection of choice 18th- and 19th-century Russian furniture. “To mix 20th-century furnishings with antiques is the most difficult task of all,” said Cheneviere, who happens to pull it off brilliantly.

Simms even cajoled the fast-rising Manhattan dealer Todd Merrill to join the fair, which is considerable feat. With the pound sterling now hovering at $2-plus and shipping costs approaching stratospheric levels, for Americans dealers showing in London is proving to be more financially challenging than ever.

Merrill is definitely ready for his moment in the spotlight. Rizzoli is publishing his book, Modern Americana: Studio Furniture from High Craft to High Glam, the first-ever definitive examination of studio furniture masters working between 1940 to 1990, which is set to hit bookstores this October. Thus Merrill may well take on the high-profile mantle of Leslie and Leigh Keno, the blond twins of Antiques Road Show fame who popularized our colonial furnishings.

Sold off Merrill’s stand was a Samuel Marx bombé chest in silver leaf for £40,000, a pair of Gio Ponti commodes for £25,000 and two matching James Mont upholstered chairs. Mont was designer to the mobster elite, chaps like Bugsy Siegel, and his work is now sought by Russians, no less.

“Clients like the edgy history of Mont; his gilt, his glamour and his gangster, slightly womanizing, boozing past,” said Merrill. A Paul Evans 1977 bronze sideboard with a raised abstract sculptural front, with some elements enameled brilliant orange, others chalky blue and gold, was pegged at £180,000. Work by Evans, a member of the New Hope school, is now the hottest design commodity. Even rocker Lenny Kravitz snared one of Evans neo-Brutalist pieces of furniture from Merrill a while back. So watch for Evans’ prices to soar further.

Shoppers were more international than ever. “They’re all here,” said London-based 20th-century furniture dealer Gordon Watson. “The Japanese, Australians, American decorators, local hedge funders and the Gulf States contingents.” Watson sold a massive Italian stone table and a pair of metal wall appliqués by the American Curtis Jeres, whose work was ubiquitous back in the ‘60s. Practically the entire Danish Modern set, in suburbs from Westchester straight across to Santa Monica, had a Jeres or two on their walls.

Also appealing was the stand of Brussels dealer Müllendorf, which boasted a T. H. Robsjohn Gibbings 1960 daybed in walnut for only £15,000 and masses of Deco silver.

Overall, Olympia claims blue ribbon status for marketing strategy and execution at a time when traditional fairs on both sides of the pond are fast losing their luster as new contemporary-art fairs are replicating around the globe. As you may have noticed, contemporary art fairs are akin to the fashion boutiques of the ’60s — new ones pop up practically daily.

For example, at Art Basel, which closed this past Sunday, Scope fair founder Alexis Hubshman announced yet another fair — this one Asian-themed — for the Miami fair frenzy in December. And the third edition of Design Miami/Basel really ratcheted up the glam factor with Tinseltown starlet Brad Pitt and Russian billionaire Roman Abramovich both on shopping sprees.

Today’s megawatt attention on art and design — even examples turned out quite literally only yesterday — has been pushing routine antiques straight off the radar screen. But with its stylish strut, Olympia appears hands down to be right on target in the fast-changing antiques world.

BROOK S. MASON is U.S. correspondent for the Art Newspaper, and also writes for the Financial Times, the New York Sun and other publications.