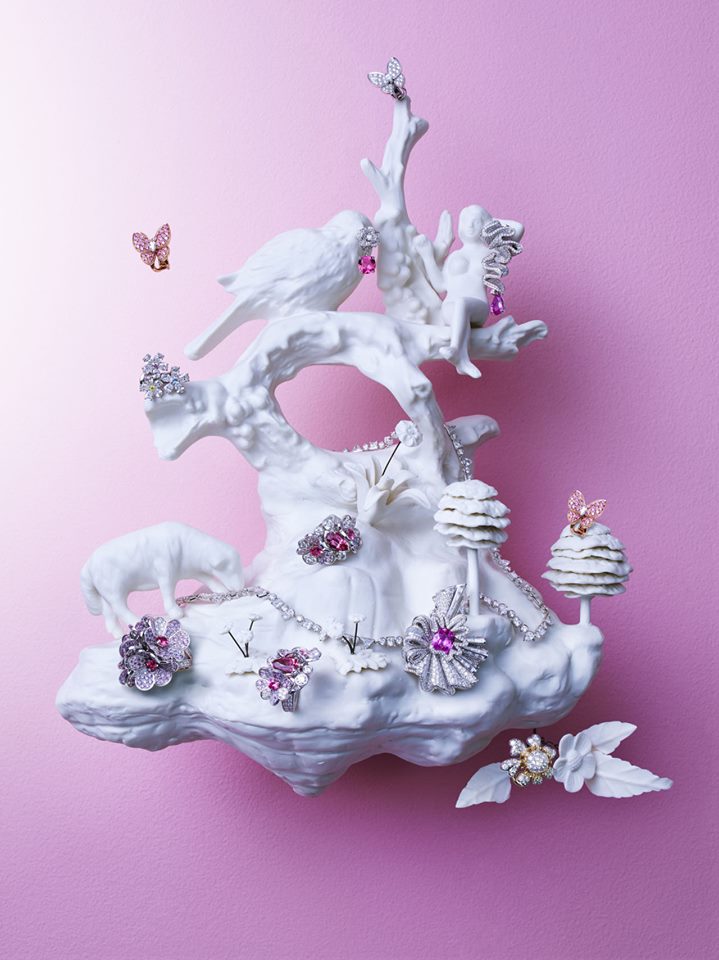 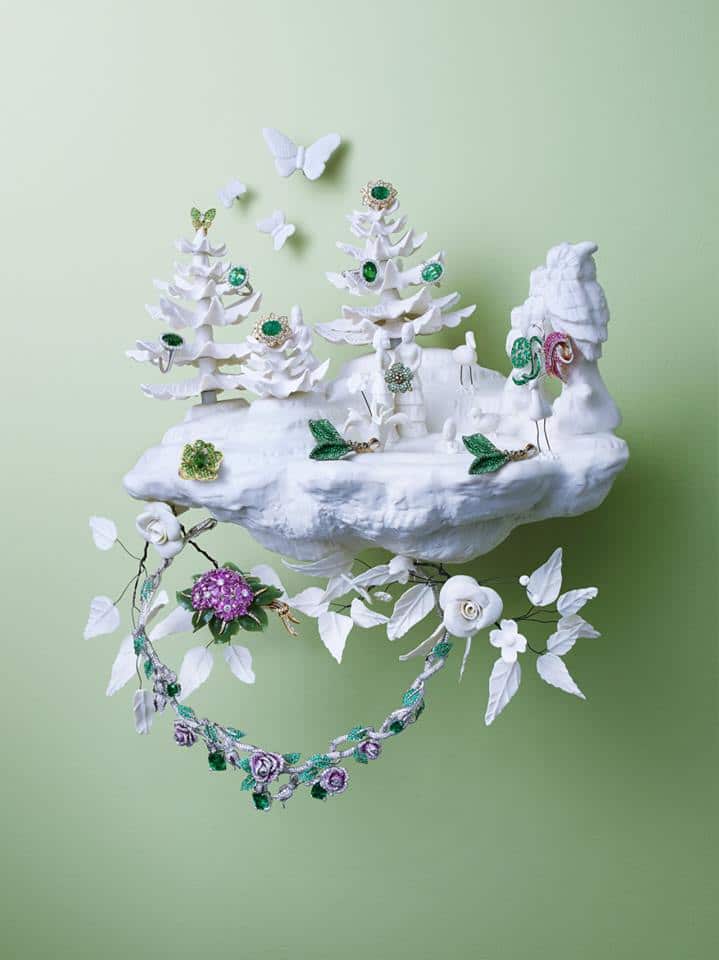 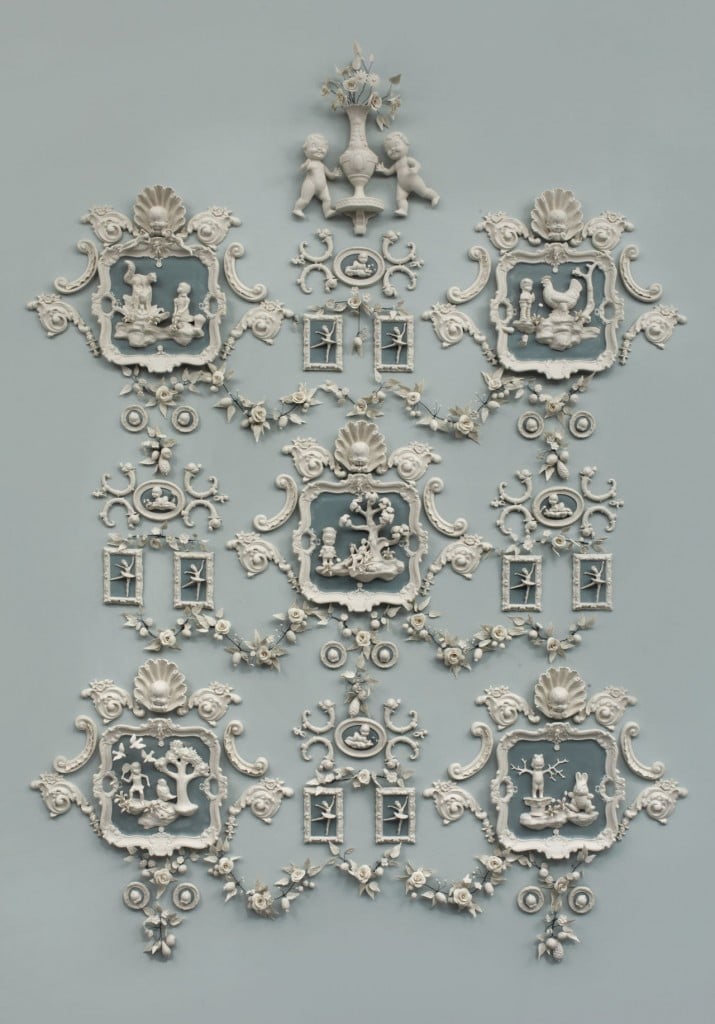 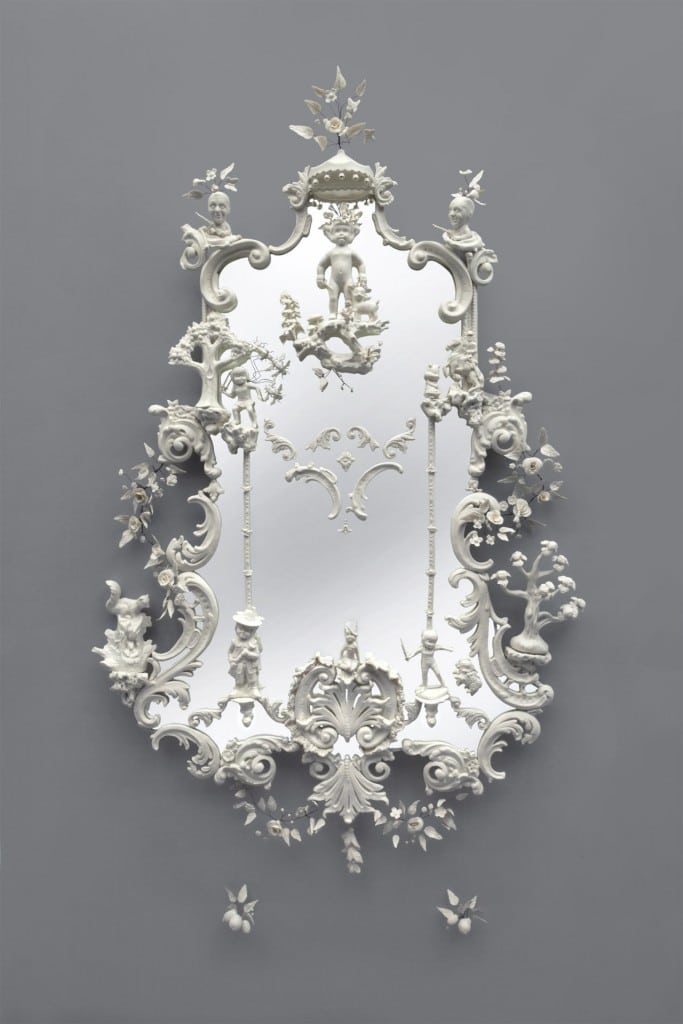 FALL JEWELS: OFF THE WALLS

Get lost in artist Beth Katleman’s porcelain dreamscapes, adorned with the season’s most luxurious jewels.

From afar, Beth Katleman’s three-dimensional porcelain “wallpapers” evoke the rococo opulence of 18th-century Versailles—toile de Jouy brought to life. Step closer, though, and the Brooklyn artist’s sinister humor begins to peek through, her pastoral gardens revealed to be constellations of flea market kitsch, inhabited by mischievous characters cast from squeaky toys and dismembered figurines. That’s the delight—and wit—of Katleman’s work, which falls somewhere between critique of and paean to frivolity, and hangs on the walls of Dior’s Hong Kong flagship.

Draped here, and in the September issue, in the season’s most luxurious jewels are three of the 48 cloudlike islands that make up Katleman’s seminal piece, Folly (which, in full, spans 9 by 16 feet), and a new solitary sculpture, The Sailor and the Nymph.

“Some of the jewelry echoed the forms of the porcelain,” Katleman says of the shoot, while others embellished its dark narratives, making for perfect, ironic partners to her miniature arenas. “At one point, we placed a brooch on top of one of the ponds, covering a drowning bridesmaid—it was as though it was pushing her down,” she adds with a naughty grin. “The fabulousness was too much for her!”

Katleman’s studio—a stone’s throw from her Gowanus home, where she lives with her 12-year-old twin son and daughter—can rival the most bountiful garage sales. “Oh, that’s a great story,” she says of a set of dentures, one of the many porcelain-cast trinkets that compose The Sailor and the Nymph. “This woman, Dorothy Globus, who’s a curator at the Museum of Arts and Design, has a massive collection of tchotchkes in her loft—little miniature buildings and everything. She invited me to come and see her treasures and to choose something to cast.” Naturally, Katleman chose the teeth.

Cheeky and sharp-witted as her work, Katleman traces the origins of her booty from cake shops to sidewalk litter. “When my kids were young, I would go to their friends’ houses and say, ‘Are you still playing with that little rhinoceros? Can I have it?'” she says over bonbons at Todd Merrill Studio Contemporary, where her work is sold. “They’d be at a toy store and be like, ‘We’re ready to go, Mom,’ and I’d be like, ‘Oh, just a few more minutes!'”

The discussion returns to the bridesmaid, a figure that is reprised often throughout Folly’s many floating scenes, one of which appears here against a mint green backdrop, garnished with emerald jewelry by David Webb and Fabergé. “There are two bridesmaids and a little baby in the pond,” the artist narrates the picture. “It’s interesting to me that people interpret it so differently. Some say the baby’s having a nice swim; some say he’s in distress; some say the bridesmaids threw him in there.” Domesticity is a recurring theme in the sculpture and throughout Katleman’s work, full of wedding ceremonies and babies of various warped scales. (Two upside-down porcelain babies dangle from the ears of Katleman’s gallery director, she points out, a personal gift from the artist.)

Just as resounding are her literary references, like the characters that inhabit The Enchanted Hunters, a ceramic-enclosed mirror that riffs off of Vladimir Nabokov’s Lolita. The onetime English major chose a Colonel Sanders figurine for the role of Humbert Humbert and a tennis trophy doll for her protagonista.

Where, other than her children’s toy chests, did Katleman find inspiration for her artwork? “It really started with traveling around Europe and looking at porcelain rooms in palaces,” she says. “There’s one in the Royal Palace of Aranjuez in Spain that I really love, where the walls, the ceiling, the chandeliers—everything—are teeming with these amazing porcelain chinoiserie figurines, and it’s like walking into a room filled with liquid gold. At the time that’s actually how expensive porcelain was—like, they used gold when they couldn’t afford porcelain,” she marvels. “There’s something about walking into that much excess, opulence, grandeur, and fantasy.”

At first, Katleman covered her works in brightly colored glazes, as opulent and delectable as the walls of Aranjuez, but over time she moved away from its lush sweetness and toward the irony of the minimalist kitsch that now constitutes her all-white, signature aesthetic. “It’s kind of this other-worldly surface but with a directness and rawness to it,” she says. “Folly,” which Katleman completed in 2010, “was the first time I felt: ‘Wow, I really kind of nailed that.'”