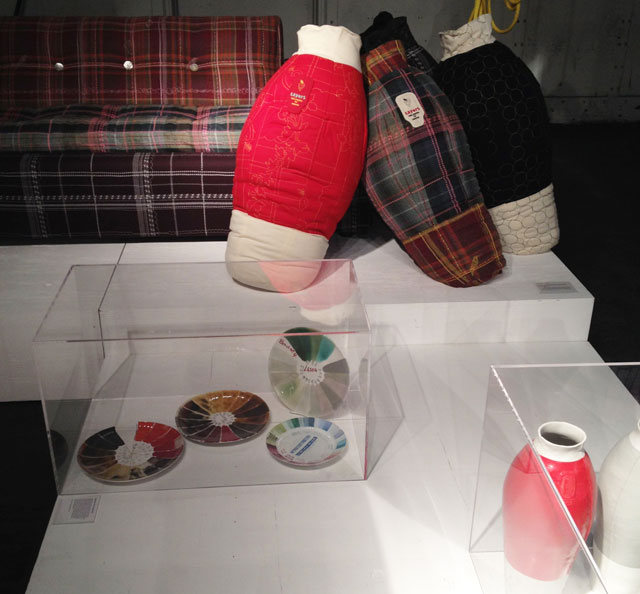 Work by Hella Jongerius, including “Quilted Vases” (2006), at the Collective 2 Design Fair (all photos by the author for Hyperallergic) 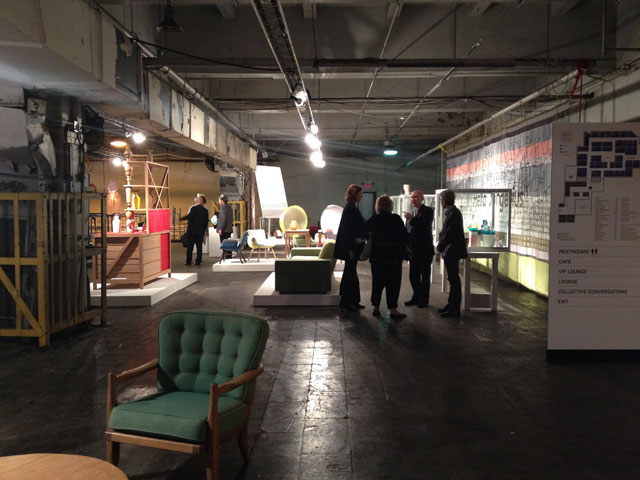 The display of work by students of the Design Academy, Eindhoven, in the Netherlands 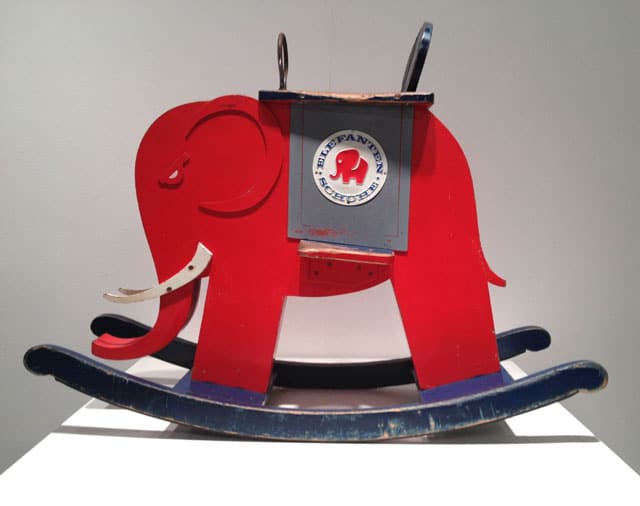 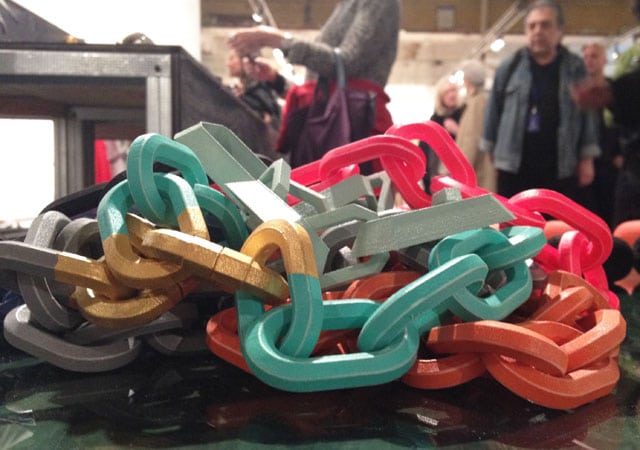 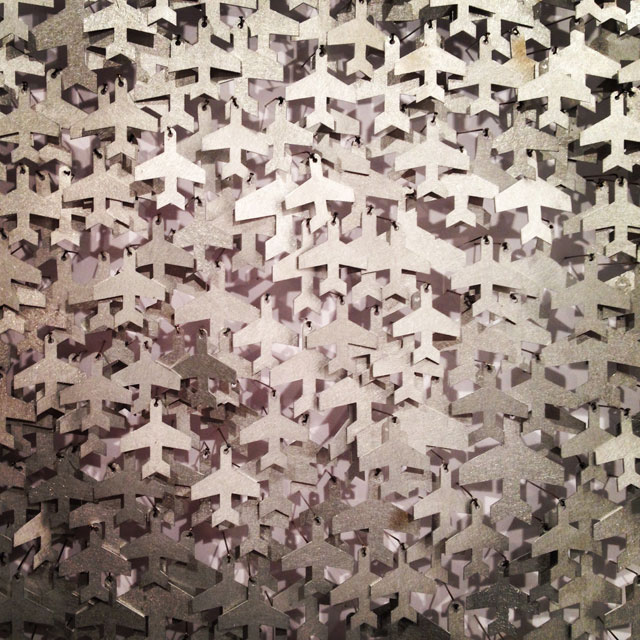 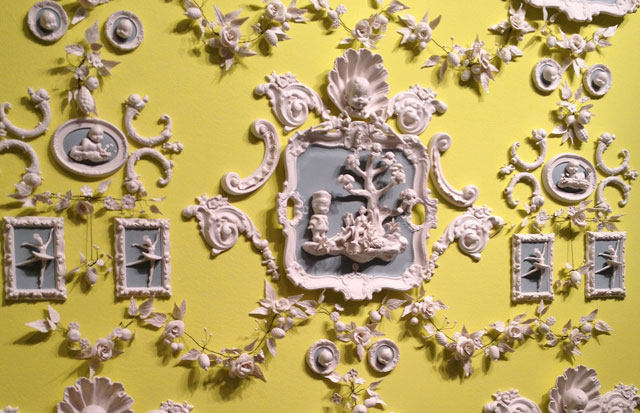 A DESIGN FAIR WITH A SENSE OF PLAY

The first thing you see when you enter Collective design fair at the Moynihan Station Skylight space is a mini-exhibition of work by Hella Jongerius, organized by Murray Moss and Franklin Getchell of design think tank Moss Bureau. The presentation includes a group of stuffed “Quilted Vases” (2006) by the Berlin-based Dutch designer. These rather cozy versions of Jongerius’s famed “Red White Vase” from 1997 tell you that this is not a deadly serious presentation for expert eyes only. The pair of well-behaved live chickens at the center of Dienst + Dotter’s booth confirms this hunch.

There’s something playful about Collective 2, as this year’s edition of the fair, which is organized by interior designer and architect Stephen Learner and comprises 36 galleries from around the world, is called. The approach is a breath of aesthetic fresh air: exuberant, uneven, a little wild in places, all of which is welcome. This fair is only two years old, so it seems appropriate that for all of the vintage furniture on view, there remains a feeling of discovery in the breadth of galleries, some relatively unknown in the United States, and the quantity of emerging artists represented. Moynihan Station’s exposed ductwork and the bundled electrical cords tucked into every corner lend the fair a welcome hint of DIY grit.

The scope of Collective 2 could be described as postwar and contemporary decorative arts and design. Furniture wins the day, but some of the most innovative and striking displays are devoted to studio jewelry. This year’s edition features a focus on Scandinavia, curated by Museum of Arts and Design Director Glenn Adamson, in the form of a selection of works highlighted in various booths that illustrate important aspects of Nordic design. There’s also an impressive installation of work by students of the Design Academy, Eindhoven, in the Netherlands (Hella Jongerius’s alma mater). Most participating galleries are American, but several hail from as far afield as Beirut, Mexico City, and Brussels.

One of the loveliest surprises of Collective 2 is the presence of New York–based kinder MODERN, a gallery that specializes in children’s furniture from the 1920–80s. With the Museum of Modern Art’s 2012 exhibition Century of the Child: Growing by Design, 1900–2000 and scholar Amy Ogata’s 2013 book Designing the Creative Child: Playthings and Places in Midcentury America, this is a subject that’s been getting serious and well-deserved attention lately. At the fair’s opening on Wednesday night, a sense of delight at seeing these smart, beautifully fabricated bedroom sets and toys designed by the likes of Memphis star Gaetano Pesce and scaled down for children was palpable among the crowd. Kinder MODERN’s presence has the added benefit of cluing in visitors to the fact that whimsy is to be found in the grown-up booths, too.

At Sienna Patti Contemporary, a beguiling pile of Rachel Timmins’s technicolor “Rapid Produce Chains” is positioned near Nanna Melland’s “Swarm,” an inspired installation of thousands of flat aluminum airplane-shaped pendants. Visitors are invited put money in a weathered cashbox on the honor system (suggested amounts between $20 and $80) and take a pendant that seemed a fair trade for the price based on its size. Sienna Patti’s booth covers the widest and most diverse assemblage of objects, with the democratic, light-as-a-feather plastic and aluminum by Timmins and Melland alongside investment-quality works by established studio jewelers like Giampaolo Babetto, Helen Britton, and Sondra Sherman.

Another highlight is Beth Katleman’s porcelain installation “Hostile Nature” at Todd Merrill, a low relief wall piece inspired by an 18th-century print room wallpaper from the Victoria and Albert Museum. The work brings its source material into three dimensions, but only enough to resemble exquisite fondant icing on a life-sized confection. Each of its framed scenes features tiny, devilish porcelain figures that have been cast from small plastic toys and flea market trinkets. These characters are getting up to no good in fine Rococo style, where you might expect to see expressionless cherubs or romanticized milkmaids passing a quiet afternoon. Set against a vivid chartreuse wall, the sleepy Wedgewood blue-and-white color palette brings to mind the wall of a museum period room that’s been given an electric shock.

Collective 2, like most fairs of its kind, is aimed primarily at a rarified group of buyers. But a visit is a feast for the eyes and a chance to see some eccentric and wonderful works up close and personal. The mid-century focus paired with the works of newer and emerging artists, touches of neon, new and idiosyncratic materials, all converge to inspire a sense of optimism about the design community’s sense of possibility and play.

Collective 2 continues at the Skylight at Moynihan Station (360 West 33rd Street, Garment District, Manhattan) through May 11. Tickets cost $25 for adults, but tours of the fair are free and open to the public.