The New York TimesThe Furniture and Life Of Paul EvansFebruary 20, 2014 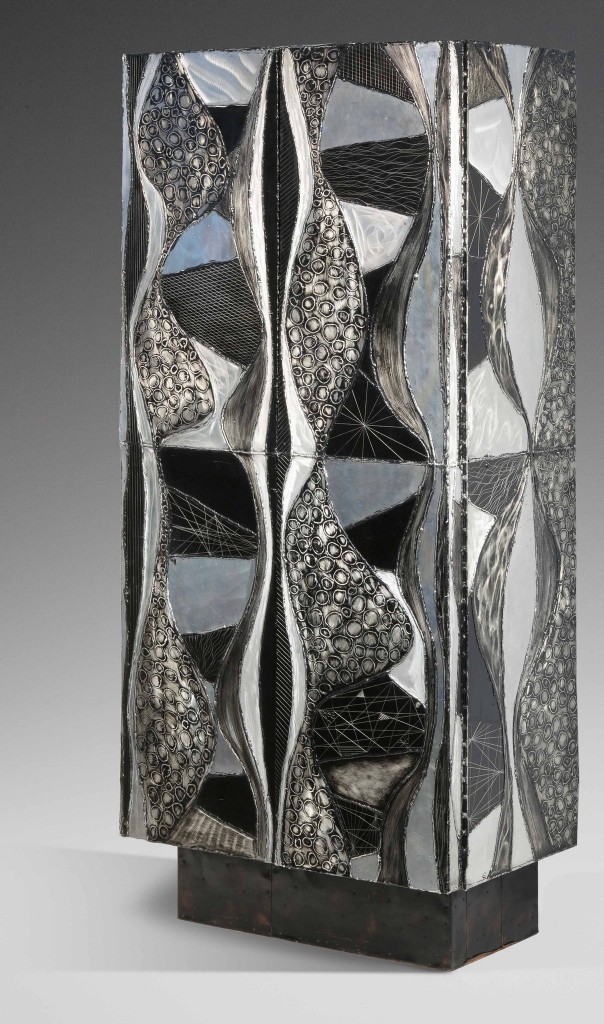 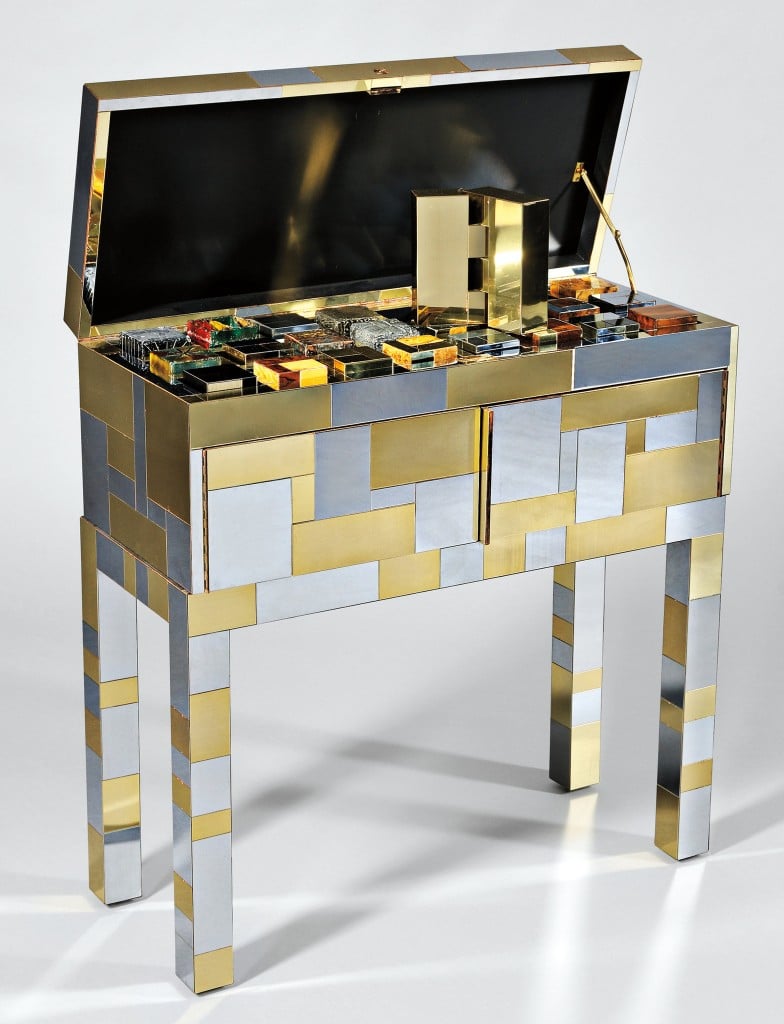 A Cityscape samples chest will be in a Paul Evans show in Pennsylvania. Skinner/Dorsey Reading Collection

THE FURNITURE AND LIFE OF PAUL EVANS

Aggressive metal furniture by the designer Paul Evans is not easy to categorize.

“His work is stunningly beautiful, stunningly ugly, stunningly tacky, stunningly sophisticated,” the performer Lenny Kravitz, who collects Evans pieces, says in a new documentary. The film will play at the first major Evans retrospective, which opens on March 1 at the Michener Art Museum in Doylestown, Pa.

In the show, “Paul Evans: Crossing Boundaries and Crafting Modernism,” and its catalog (from Arnoldsche), the designer comes across as gregarious, inventive, tireless and troubled.

His showrooms and workshops in and around New Hope, Pa., let customers see just a few rough sketches of their orders in advance. His manufacturing techniques sometimes emitted toxic fumes and had to be abandoned. His short-lived Manhattan branch called the Think Tank was a costly failure. The day after he retired, in 1987, at 55, he suffered a fatal heart attack.

“In the end,” his former assistant manager Wink Nessa says in the film, “there was too much drinking and not enough attention paid to the shop.” She adds, “His demons toward the end became too great.”

Evans had spent his childhood in Newtown, Pa., where his father ran a Quaker school’s English department, and his mother trained as a painter. (Evans’s birthplace is often listed as Newtown, but the new book notes that he was actually born in Trenton.) He trained at the Cranbrook Academy of Art near Detroit and then briefly worked as a metalworker demonstrating techniques at Old Sturbridge Village in Massachusetts.

Around 1955, he set up his own business, and went through phase after phase of favorite styles and materials. He collaborated with his friend Phillip Lloyd Powell on furniture combining gilded and gnarled wood and metal filigree, then started covering cabinets with raw metal star bursts and knobs. He experimented for a while with mirrored metal and then wove electronics into furniture, so that doors and shelves could be moved around by remote control.

His patrons tended to be intellectuals, including Norman and Rina Indictor, collectors of Islamic art, and the design gallerist and historian Helen W. Drutt English; they are lending pieces to the Michener show. The Manhattan furniture gallerist Todd Merrill, who produced the new Evans documentary with his wife, Lauren, said he has had trouble persuading original owners over the years to part with the massive and thorny objects.

A Cityscape samples chest will be in a Paul Evans show in Pennsylvania. Skinner/Dorsey Reading Collection
“There’s such emotional attachment to the pieces,” Mr. Merrill said during a tour of his own gallery, surrounded by Evans cabinets, lamps, frames, tables and bedsteads. (Prices range from $3,000 to $300,000 each.)

In the 1990s, the Evans market cooled: Mr. Merrill said he used to rescue vintage works from trash piles. Evans himself discarded much of his archive, even family memorabilia. (Evans had two sons, Paul and Keith, with his first wife, the designer Elaine Bebarfald; after they divorced, he married the dress shop owner Louise Weiler, who was known as Bunny.)

Evans’s studio manager, Dorsey Reading, would retrieve his tossed-out paperwork. “Yours truly was the garbage picker,” Mr. Reading said in an interview. He has lent the Michener his documents and about 20 works by Evans, including a 1960s aluminum ashtray that looks like splashing water and a 1970s bar cabinet with bronze semicircular doors that seem to have been gouged and clawed.

The Michener has acquired major works by Evans and his circle in the last few years. At the Rago Arts and Auction Center in Lambertville, N.J., the museum bought a pair of Evans’s 1970s cardboard chairs for $3,900, a 1950s walnut fireplace from Powell’s showroom for $96,000 and a 1970s serrated doorway from Powell’s house for $54,9000.

An Evans bronze cabinet at Mr. Kravitz’s Paris townhouse, a 12-foot stretch of flanges and blades, was deemed too unwieldy to travel for the retrospective. (Mr. Merrill had bought it for $45,000 at Rago in 2006.)

The Sebastian & Barquet gallery in Manhattan, which is taking half a dozen Evans works to the Tefaf show next month in Maastricht, the Netherlands, has lent a scalloped steel sideboard to the Michener; the piece cost $26,250 at Rago last fall.

“Evans has a really interesting trajectory,” the gallery’s executive director, Tara DeWitt, said in an interview, “from very craft-based in the ‘50s to very flashy in the ‘70s and ‘80s.”

On March 2, Rago will offer about 30 Evans works, with estimates from $1,500 for a walnut backgammon table to $35,000 for a ridged metal and slate cabinet about eight feet long.

The New York TimesThe Furniture and Life Of Paul EvansFebruary 20, 2014