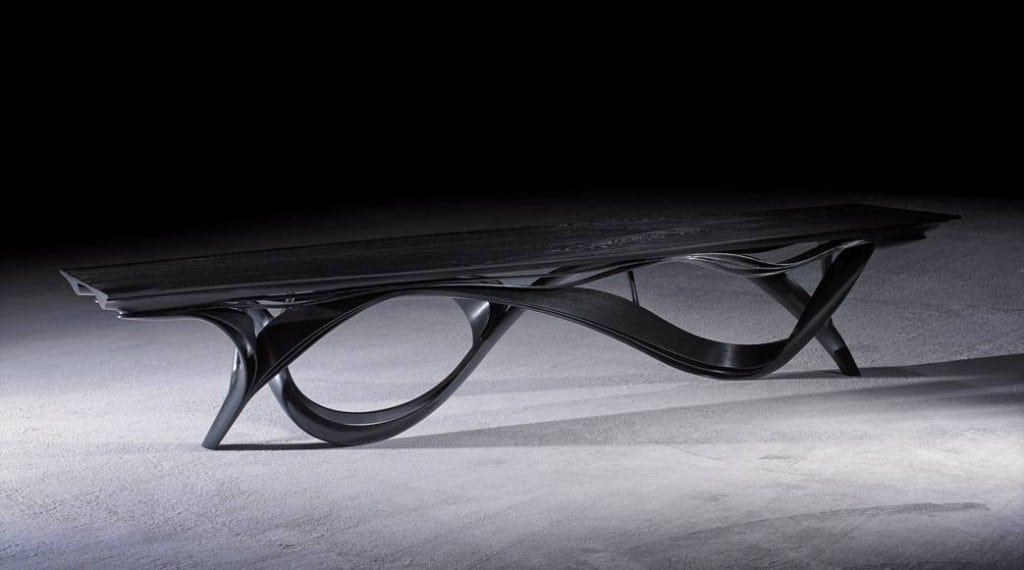 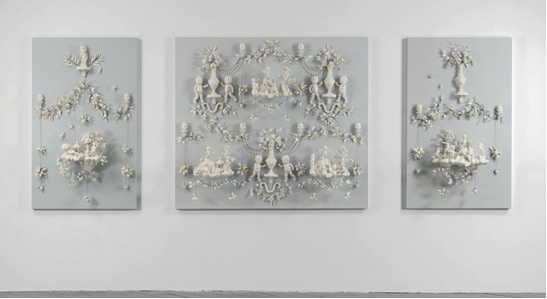 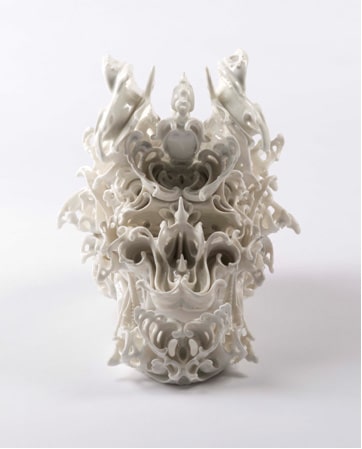 Todd Merrill Studio Contemporary is pleased to be participating in the inaugural FOG Design + Art Fair at the Fort Mason Pavilion in San Francisco from January 17-19, 2014. The focus of Merrill’s booth will be new work from Studio Contemporary artist Joseph Walsh as well as a porcelain triptych from Beth Katleman and a LED light sculpture from Niamh Barry.

Three new pieces from Joseph Walsh’s Enignum Series will be the focus of the booth. The 13′ L Enignum XII Dining Table is the first table that Walsh has completed in Olive Ash with a black pigment finish. In the Enignum series of work, furniture virtuoso Walsh strips wood into thin layers then manipulates it to create free form compositions. The self-taught Walsh opened his studio in Co. Cork, Ireland in 1999 and has since built a reputation for himself as one of the most interesting and complex furniture-makers working today. An Enignum VI Shelf and an Enignum II Chair will accompany the dining table. Walsh’s work is in the collection of the Duke of Devonshire, Chatsworth House, England, the National Museum of Ireland, Dublin, Ireland, The Mint Museum in Charlotte, North Carolina, the Museum of Arts and Design, New York and was most recently featured in “Against the Grain: Wood in Contemporary Art, Craft, and Design” at the Museum of Arts and Design in New York, NY and “Modern Makers” at Chatsworth House, England.

Beth Katleman’s “Girls at War” (2013) is a follow-up to her monumental and critically acclaimed “Folly” (2010), a three-dimensional porcelain wallpaper. This new work examines the dark side of childhood. Precious little flower girls go to war amidst pastoral scenes and garlands of delicate porcelain flowers. “Girls at War” is simultaneously seductive and deeply unsettling.

Light sculptress Niamh Barry’s installation, “Shoulder” (2013) made of black patinated and mirror polished hand formed solid bronze, opal glass and LED lights, will be making its US premiere. “Shoulder” is based on observations of the human form and the dichotomy between strength and fragility. Niamh has emerged as one of the most interesting and promising sculptors working with light since Merrill exhibited her work at Design Miami/ Basel, Basel, Switzerland in June 2012.

Additionally, the booth will feature work from several artists that are recent additions to Studio Contemporary such as a series of sculptural hand-made vessels made from recycled plastic inspired by artifacts in the collection of the Metropolitan Museum of Art made by Brooklyn-based artist Shari Mendelson and a table by German artist Markus Haaase, a masterpiece of intertwined wood and stone. Rounding out the booth will be Katsuyo Aoki’s Predictive Dream Series Skulls no. 44. This new piece is twice the size of her original porcelain skulls and is twice as intricate and twice as powerful.