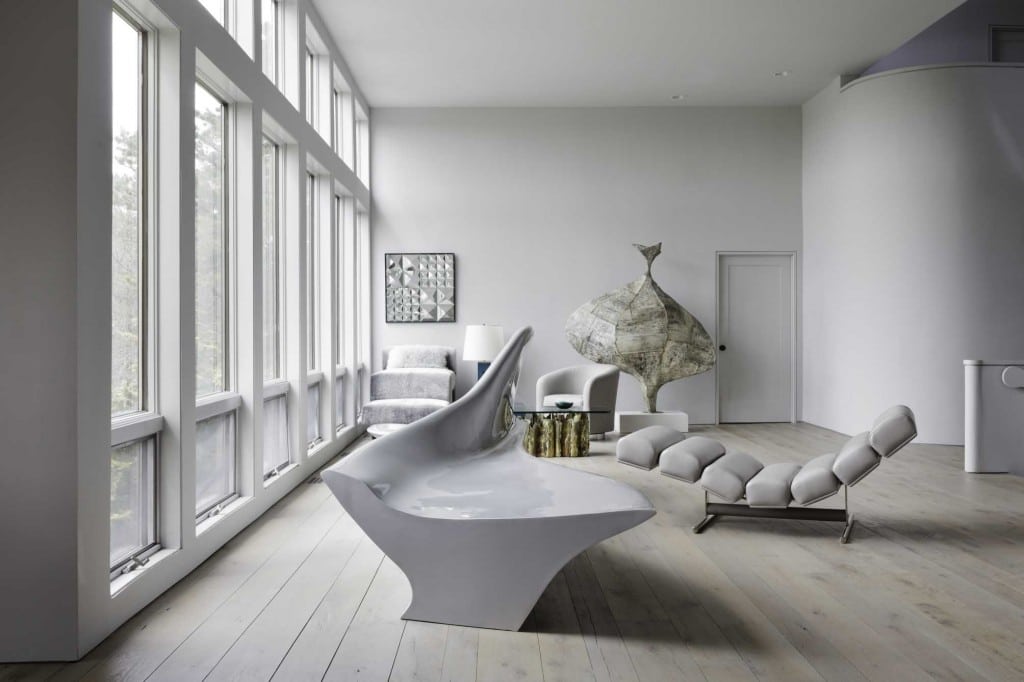 A Vladimir Kagan Omnibus high-low seat and a Verner Panton mirror sculpture occupy a corner of the living room of this Southampton home, which doubles as a design lab for Todd and Lauren Merrill. The glass, brass and steel of the coffee table, by Silas Seandel, complements the sculpture “Onion” by Paul Evans. (Credit: Courtesy of The Monacelli Press / Fran Parente) 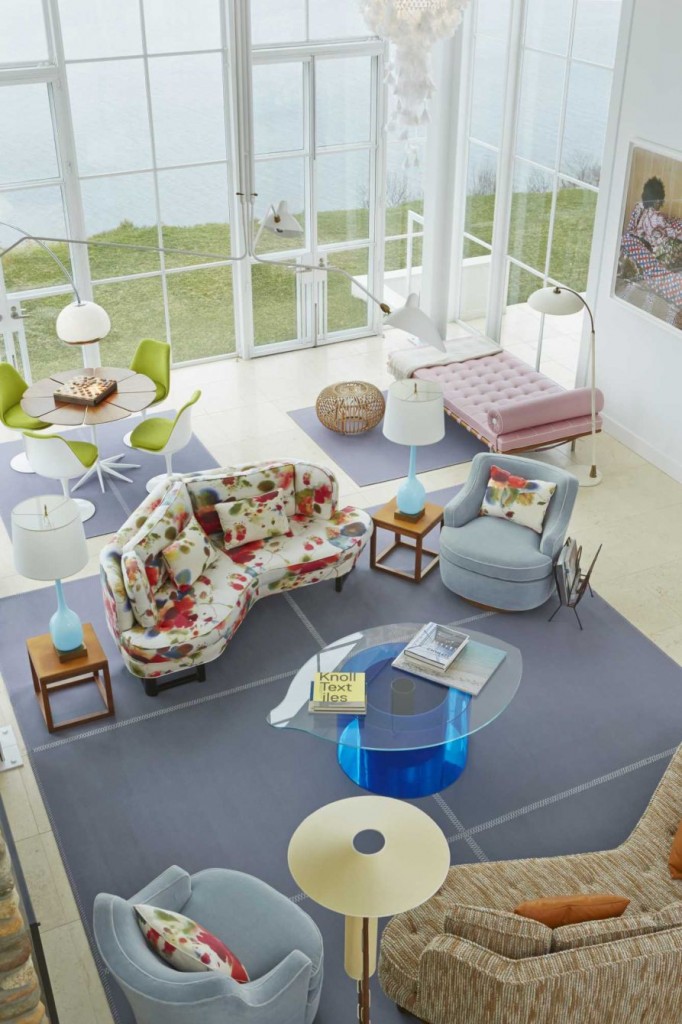 This Shelter Island residence features two Edward Wormley corner sofas for Dunbar, of similar shape but slightly different proportions, covered in two very different fabrics. Swivel chairs, also by Wormley, are covered in light-blue velvet and are arranged around a coffee table in the shape of an eye, designed by Nicola L. A large FilzFelt rug completes the room’s main seating area. (Credit: Courtesy of The Monacelli Press / Anastassios Mentis) 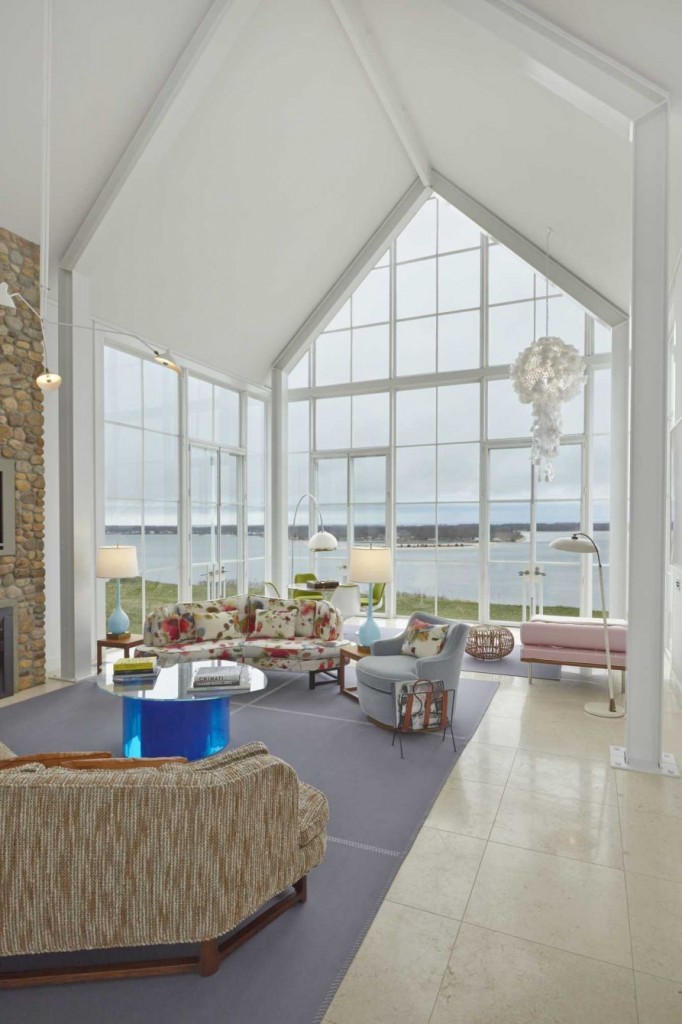 The living room addition in this Shelter Island residence was designed with a high peaked roof and walls of windows positioned to take full advantage of bay views. The home features two Edward Wormley corner sofas for Dunbar, of similar shape but slightly different proportions. Swivel chairs, also by Wormley, are covered in light-blue velvet and are arranged around a coffee table in the shape of an eye designed by Nicola L. (Credit: Courtesy of The Monacelli Press / Anastassios Mentis) 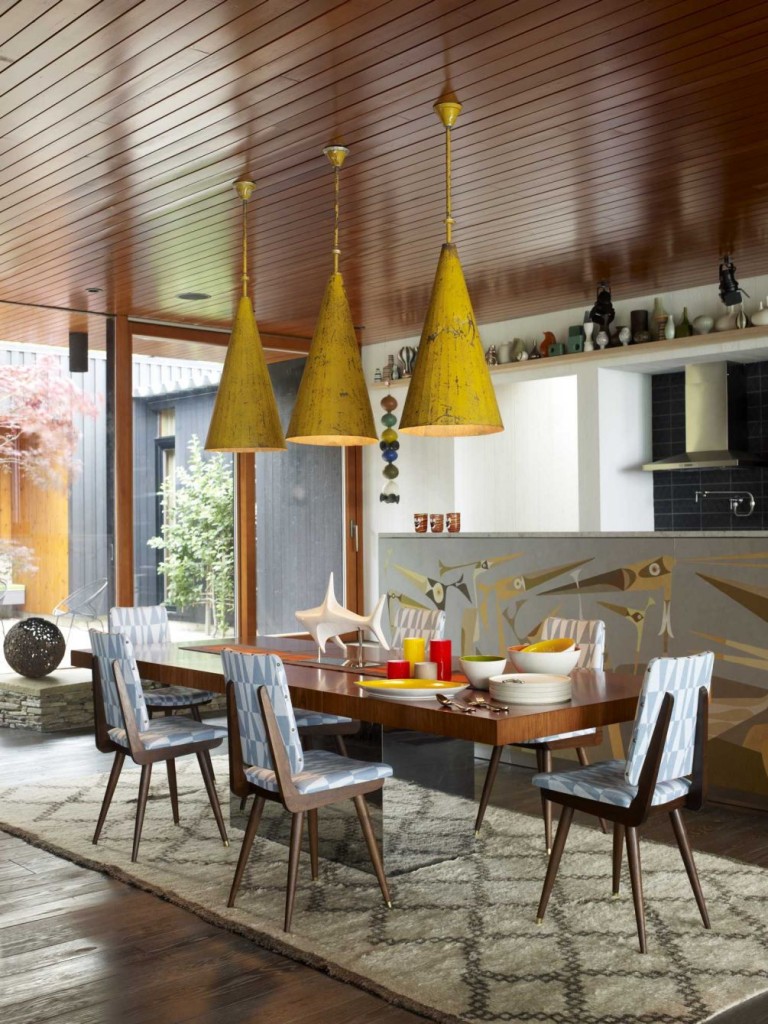 Three vintage pendant lamps from a Paris flea market hang over the dining table and echo the strongly conical shape of the fire pit’s chimney in this Shelter Island home. The dining chairs are designed by Jonathan Adler, as is the rug. Artist John Paul designed the mural depicting stylized birds that divides the kitchen from the dining area. (Credit: Courtesy of The Monacelli Press / Joshua McHugh)

DESIGN IN THE HAMPTONS

A look at the interior designs featured in the book “Design in the Hamptons” by Anthony Iannacci and “Interiors” by Sandra Nunnerley.

It’s easy to think of weathered wood floors, driftwood accents and jars full of seashells when imagining beachy home decor in the Hamptons. But next week, the new book “Design in the Hamptons” (The Monacelli Press, $75) washes in.

Author Anthony Iannacci writes about the homes of more than 20 designers and architects and their clients, covering everything from interiors to exteriors, from traditional to contemporary, and there’s hardly an aquatic abstract painting to be seen in the 320-page coffee-table book.

“The Hamptons for decades and decades was a place where architects and designers from New York City would come to build and decorate homes,” says Iannacci, who grew up spending summers in Southampton and who for many years owned homes in East Hampton and Amagansett but now spends most of his time in Los Angeles. While designers often are restricted to city apartments and the occasional townhome, “in the Hamptons they can do full-size homes,” Iannacci says. “It is sort of a backhanded way to showcase the work of some of the best designers in New York City.”

Iannacci says he didn’t want to write about the quintessential beachside place that is the fantasy of many. Instead, he wanted to show that a home in the Hamptons doesn’t have to be “a sprawling McMansion.”

“These are intimately scaled family homes that invite you to come in with wet bathing suits and just be together,” he says.

While the thought of plopping one’s wet fanny down on the vintage floral couch in the home designed and decorated by architects Philip Galanes and Michael Haverland may be a stretch, the full-color photos are inviting. The mix of materials and textures complement the furnishings, which range from vintage to contemporary.

“We wanted to design something that is modern and comfortable but architecturally relates to the existing structure,” says Haverland, 47, of the modern addition they added to a traditional home on Shelter Island. Although initially they were going to tear down the existing house and build an all-modern replacement, the architects and the client decided that adding an extension would be more eco-friendly.

The addition has large, steel-rimmed windows that look out on Shelter Island Sound. The view outside is rivaled by the bold use of color, patterns and textures inside.

The pair chose to go vintage with many of the pieces, including an angular floral couch by the late American modernist designer Edward J. Wormley. Haverland, who shares homes in East Hampton and Manhattan with Galanes, explains that much of the furniture made today is oversized, often overwhelming a room.

“I start with the sofa, then add comfortable chairs, then a coffee table and accessories,” Haverland says of his plan for decorating a room.

Todd Merrill doesn’t so much have a plan as use his home as a place to try new things. A dealer for artists who make furniture, Merrill regularly redecorates with the season, or the whim.

“We think of our house in Southampton as a design lab,” says Merrill, who also has a home in Manhattan with his wife, Lauren. “It is where I bring things to photograph and put things together to see how they look.”

An example of this is what they affectionately call “the whale.” The two-tone acrylic piece that generously can be called a couch or bench is reminiscent of an orca.

“We have a view of Shinnecock Bay and the ocean,” Merrill says. “The piece does have an aquatic, sea creature feel about it, in an abstract way.”

Merrill chooses to use various shades and textures of neutral as the canvas for his eclectic furnishings. There’s a story behind nearly every item in the home.

For example, “Onion,” a steel sculpture by Paul Evans, had been partially buried on someone’s property in New Hope, Pa. “You know how things fall in and out of favor,” Merrill muses. “It was made in the 1960s and someone loved it very much. By the 1990s, it was in the backyard.”

Merrill has an interesting philosophy about interior design, as if he wants everyone to become Capt. Ahab and search for their own design “whale.”

“Almost tacky can be really good,” Merrill says, with a laugh. “Your decor should be edgy, pushing the sensibilities. With places like Crate & Barrel, Pottery Barn and Ikea, everyone can have ‘good taste.’ You have to be daring to add something fun, cool and edgy to your decor.”

It is this personal sense of style that author Iannacci champions in the book.

“The book pays homage to this location and the artists who made it what it is today and the design artists who live here today,” Iannacci says. “Sometimes it is a really simple gesture, but at the same time reinforces the idea of being in this specific space at this specific time.”

When partners Jonathan Adler and Simon Doonan built their Shelter Island home, they wanted a place that would reflect their tastes while “still honoring the sublime landscape given to us by Mother Nature,” Adler says.

“I’m a minimalist designer, but a maximalist decorator,” Adler says. “We didn’t set out on some anti-shingle Hamptons crusade. We just wanted to build a house that felt like us.”

Each room has both function and whimsy. The almost floor-to-ceiling macramé owl is an example of the latter.
“Andy Harman’s giant macramé owl is irreverent and unexpected,” Adler says of the artwork that also pools on the floor. “I never like anything to be too precious.”
Color seems to be everywhere in their home, from the vintage, yellow metal pendant lights to the ceramic tree stump in the shower, which Adler says is perfect “for soaping your toes.”

The pair also enjoy entertaining and designed the house with the thought of long weekends spent with family and friends. Along that line, visitors never want for a place to have an intimate conversation.

“A good seating area has loads of comfortable seats, tables scattered around so your guests can effortlessly reach out their arms and set down their drinks,” Adler says. “And, if possible, be a little sunken and secluded. If a seating area feels intimate, folks are more likely to let their guard down and relax.”

Russell Groves, owner of the S. Russell Groves architecture, interior design and product design firm in Manhattan, was tasked with both retaining some of the feel of a traditional, classic East Hampton in-town house, while making the decor feel contemporary and relevant.

“Our client was an avid collector,” says Groves, who explains that he wanted to display those collections without them overwhelming the rest of the room’s decor. The items include antique measuring calipers, jars and enough ship lights to illuminate a path from the house to the beach.
“We decided to treat his collections like pieces of art,” Groves explains. “A museum doesn’t display every piece in its collection. They rotate and pick and choose. Collections shouldn’t take over your house. You should put them together in a meaningful, dramatic way that tells a story.”
He did just this with the calipers and the ship lights, grouping each together in a way that catches the eye and encourages conversation.

Groves says Hamptons style is pulling away from traditional English antiques and chintz and toward a more contemporary feel.

“I wouldn’t say that we’re the norm by any means, but your decor doesn’t have to be cliched,” he says. “People are moving away from that anchor lamp, ocean-y, cottagey type of style. People are looking for things that are more contemporary, more stylish.”

A DESIGNER ON LI

Sandra Nunnerley has left her mark around the world, displaying her top interior designs in her coffeetable book, “Interiors” (powerHouse, $70).

Originally from New Zealand, the designer moved to New York City, where she designed the top two stories of Manhattan’s Sherry-Netherland hotel, among other high-end apartments. But Nunnerley also did some designing on Long Island. She was part of the design team that renovated a Georgian Revival house in Old Brookville. A few years after the renovation, she returned to do more work on the house.
One of the most notable parts, in her opinion, is the limestone room designed to open up to the pool and gardens.

Nunnerley says she loves coming to Long Island to design because of the larger scale she has to work with.
“There is no shortage of beautiful surroundings, including gardens, terraces, pools and tennis courts,” she says.