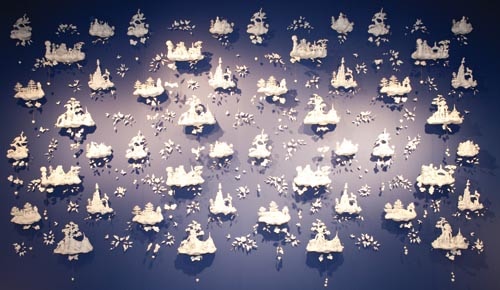 At first glance, the work appears to reference Wedgwood or French toile, but when viewed up close, these allusions dissolve. For example, one can spot a gnome riding a grinning snail past a miniature Sacré Coeur. “There’s a play between the mass produced and the handmade, the high-end production of royal collections and that particular kind of tacky porcelain,” said Katleman.
“The work contains these historical references,” said gallerist Todd Merrill, “but all the figures are found, 1950s-style kitsch objects, and when you get up close the scenes are sarcastic or cheeky or naughty.”

Katleman spends hours creating the intricate moulds from which the porcelain figures are hand cast, elevating the mass produced toys to the status of rarefied design objects. Unlike most porcelain, Katleman leaves her figures unglazed, which she says is a deliberate reference to 18th-century Sèvres biscuit porcelain. “When you transform the plastic into porcelain, the figures become a little unsettling or surreal,” she said, referring to their matt surfaces. Folly will be exhibited at New York’s Museum of Arts & Design this autumn.