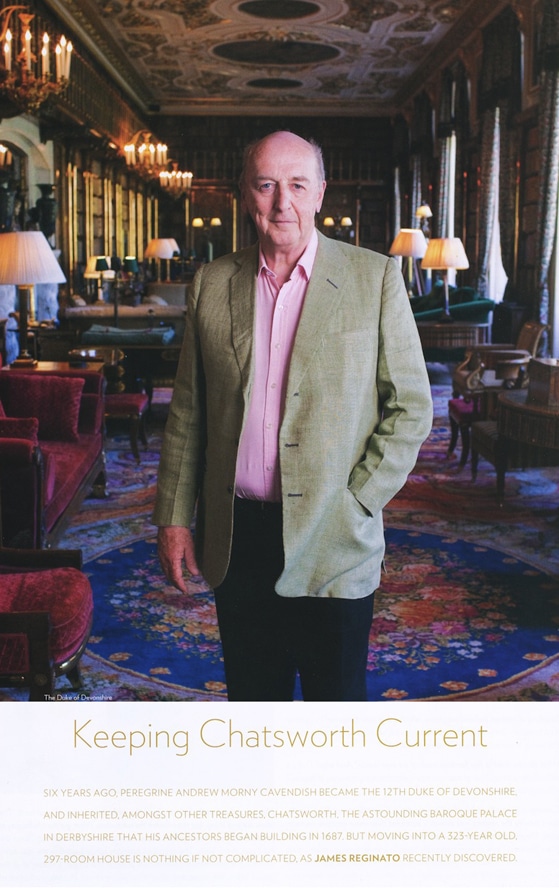 “When the Duke of Devonshire first moved into Chatsworth, he initiated a modest bit of rewiring. That led to the complete replacement of the heating, water, communications and security systems. While they were “digging up” most of the house, as the Duke recalls, it seemed a good time to do a bit of redisplaying and redecorating, in both the public and private family parts of the building. In the end, the house received its biggest facelift since the 1830s. With the alterations now largely completed it is apparent that fresh air has come to Chatsworth. But who would have suspected that a breeze would come via Bleecker Street, in downtown New York?

On a recent afternoon, strolling through the North Sketch Gallery, on the of the splendid salons open to the public, the Duke points proudly to a pair of ash wood chairs recently carved by Irish artisan Joseph Walsh. Though Walsh’s studio is in County Cork, not far from Lismore, another castle the Duke inherited, it was only on a trip to New York a few months ago that he discovered Walsh’s work, when he wandered into the Noho gallery of Todd Merrill, and was immediately smitten. “They are very feminine, yet robust, and beautifully made,” recalls the Duke, who, incidentally, does not like to be addressed as ‘Your Grace’ as other Dukes are. He prefers his nickname, Stoker. “They are the fist pieces of modern furniture we have put on the visitor route,” he continues. “And I am sure there will be more. We do not want the house to look like a museum.”