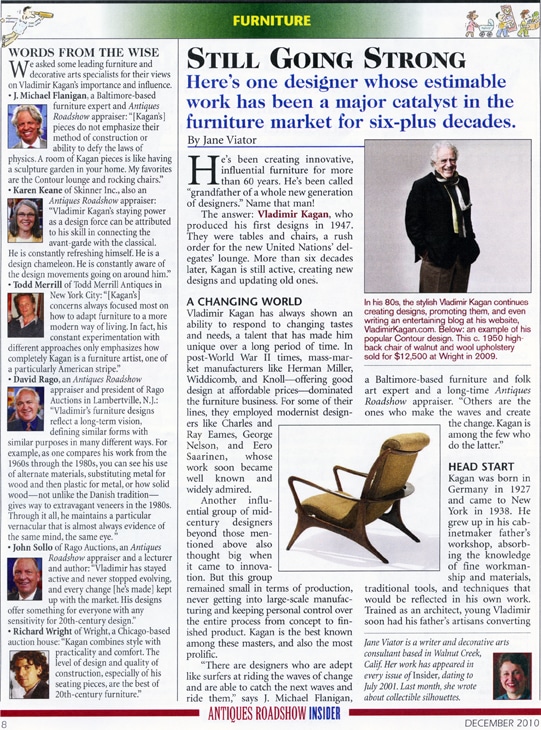 He’s been creating innovative influential furniture for more than 60 years. He’s been called “grandfather of a whole new generation of designers”. Name that man! The answer is Vladimir Kagan, who produced his first designs in 1947. They were tables and chairs, a rush order for the new United Nations delegates lounge. More than six decades later, Kagan is still active, creating new designs and updating old ones.

A CHANGING WORLD
Vladimir Kagan has always shown an ability to respond to changing tastes and needs, a talent that has made him unique over a long period of time. In post-Wold War II times, mass-market manufacturers like Herman Miller, Widdicomb and Knoll – offering good design at affordable prices – dominated the furniture business. For some of their lines, they employed modernist designers like Charles and Ray Eames, George Nelson, and Eero Saarinen, whose work soon became well known and admired.

Another influential group of mid-century designers beyond those mentioned above also thought big when it came to innovation. But this group remained small in terms of production, never getting into large-scale manufacturing and keeping personal control over the entire process from concept to finished product. Kagan is the best known among these masters, and also the most prolific. “There are designers who are adept like surfers at riding the waves of change and are able to catch the next waves and ride them” says J. Michael Flanigan, a baltimore-based furniture and folk art expert and a long-time Antiques Roadshow appraiser. “Others are the ones who make the waves and create the change. Kagan is among the few who do the latter.”

HEAD START
Lagan was born in Germany in 1927 and came to New York in 1938. He grew up in his cabinetmaker father’s workshop, absorbing knowledge of fine workmanship and materials, traditional tools, and techniques that would be reflected in his own work. Trained as an architect, young Vladimir soon had his father’s artisans converting his highly detailed dealings into imaginative pieces that reflected the mid-century modernist emphasis on organic form, structure and functionality. In 1950, Kagan and Hugo Dreyfuss, a Swiss textile designer, became partners. They opened a New York showroom for the furnishings and decorative arts that for the next ten years would be the pinnacle of sophisticated design for urban living.

THE FINE ART OF FURNITURE
Kagan’s hallmark pieces, per experts in the area of 20th-century furniture (including the designer himself) are the seating forms introduced by Kagan-Dreyfuss in the 1950s. These designs, most notably the Serpentine sofas along with the famous rocking chair and one-arm chaise from Kagan’s Contour line, are often described as “sculptural”. Many of Kagan’s client throughout his career have been collectors of modern at and leading figures in the fine art and fashion. In the 1950s and ’60s, loft living became popular, partly as a way of providing big walls and large rooms for displaying large contemporary artworks. Kagan’s sweeping free-form furniture provided a spatially and visually satisfying complement to abstract paintings and sculpture.

Still, Kagan’s sculptures-as-furniture pieces have never placed beautiful form ahead of function. The practicality and user-friendliness of his designs are mentioned by almost everyone who comments on his work. Interestingly, he was somewhat shoved aside for a while. As Kagan himself told Insider after returning from a home furnishings trade show in Paris, “For 40 years I was not much in fashion. Some of my great designs ended up in thrift shops – I wish I’d bought them!” Despite the battle for acceptance, he carried on, his work constantly evolving.

From the 1960s until 1987, Kagan continued to create the piece the pieces that clients, if not necessarily the furniture manufacturing establishment, wanted. Designs became more rectilinear and architectural. Offerings included coffee tables and multifunctional pieces such as bar-television cabinets and bookcases incorporating lighting. He closed his factory in 1987, but Kagan’s retirement didn’t last long. In the late 1990’s, when Mid-Century Modern cambia back into fashion, Kagan was rediscovered by by a new generation of admirers. He continues today with Vladimir Kagan Couture (limited edition remakes of the originals using the materials and technologies of the originals) and Vladimir Kagan mass-market versions that update his classic designs using less-expensive but still sturdy and stylish materials.

Kagan works closely with several small manufacturers , arrangements that allow him to maintain the quality control that has always been essential to him. As an example, a licensed updated version of his famous serpentine sofa can be purchased for as little as $1800, or $8000 for a custom example.

KEEPING IT FRESH
Kagan’s designs are not only icons of Mid-Century Modern but they’re practical. Antiques Roadshow furniture appraiser Peter Loughrey of Los Angeles Modern Auctions notes that the people who purchase Kagan pieces at his events are buying them to live with and enjoy on a daily basis. There are also serious collectors spending serious sums for vintage examples of Kagan’s most famous designs. Early pieces and custom creations can bring tens and even hundreds of thousands of dollars. One top example – again, a Serpentine sofa dating to 1952 – sold for $192,000 at Christies in 2005.

Why has Kagan been so successful for so long? As the man himself told Insider, “It’s not about me so much as the designs. They have a timeless quality and people can relate to them today. The shapes are elegant but not over the top. Hard work and keeping my name in from of the public has allowed me to have a very long career.”

That career isn’t over yet. And it seems likely that many of Kagan’s hundreds of designs will continue to be admired, collected, and above all used. It helps that he has international appeal. As dealer and author Todd Merrill notes, European buyers, especially French collectors, are eagerly buying Kagan pieces for their homes.

CRITICAL MASS
It may seem counter-intuitive, but extreme rarity doesn’t necessarily make a piece of furniture -or a painting, or almost anything else – more valuable. The six-figure prices for some Kagan designs (which are not generally one-of-a-kind, nor anywhere near old enough to be classified as antiques) are clear proof of this. As Antiques Roadshow appraiser John Sollo points out, there has to be a critical mass before a designer’s or artist’s output it known widely enough to be appreciated and sought-after by buyers who will compete to own examples. It’s this competition that increases awareness and pushes up prices. If someone’s output is so small that his or her work is very rarely seen, and there is lit;e chance of examples ever coming up for sale, there is no way to “make a market.” That requires, as Sollo says, “enough stuff” so that there are many pieces and prices – to compare.

Kagan, during his long career, has created hundreds of designs and thousands of pieces have been made from them. His work ranges from custom items commissioned by wealthy clients to high-end production multiples. The result is definitely a critical mass of Kagan furniture as a wide range of prices. From the beginning collectors to whom modernism is a new ooh to experienced aficionados who admired and perhaps even owned Kagan’s furniture when it was first made, there is something for everyone. And because almost everything Kagan designed is functional, user-friendly, and well made, in the opinion of many furniture experts his work will continue to be in demand, and at steadily increasing prices.