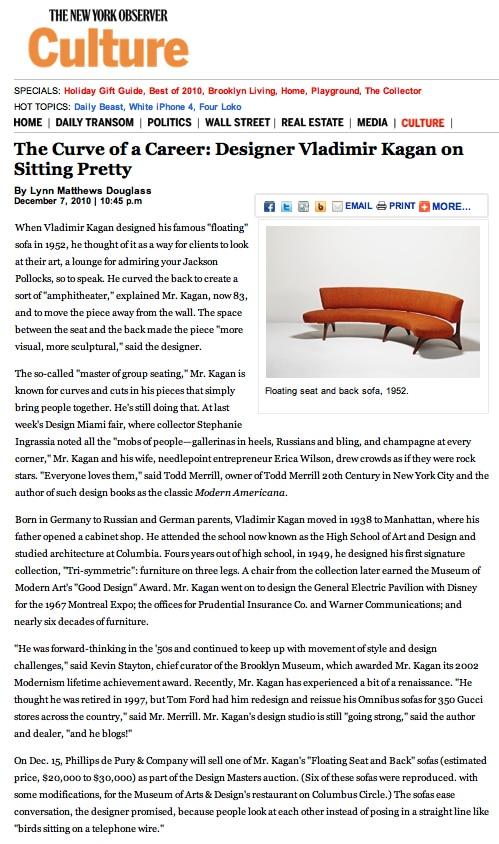 THE CURVE OF A CAREER: DESIGNER VLADIMIR KAGAN ON SITTING PRETTY

When Vladimir Kagan designed his famous “floating” sofa in 1952, he thought of it as a way for clients to look at their art, a lounge for admiring your Jackson Pollocks, so to speak. He curved the back to create a sort of “amphitheater,” explained Mr. Kagan, now 83, and to move the piece away from the wall. The space between the seat and the back made the piece “more visual, more sculptural,” said the designer.

The so-called “master of group seating,” Mr. Kagan is known for curves and cuts in his pieces that simply bring people together. He’s still doing that. At last week’s Design Miami fair, where collector Stephanie Ingrassia noted all the “mobs of people—gallerinas in heels, Russians and bling, and champagne at every corner,” Mr. Kagan and his wife, needlepoint entrepreneur Erica Wilson, drew crowds as if they were rock stars. “Everyone loves them,” said Todd Merrill, owner of Todd Merrill 20th Century in New York City and the author of such design books as the classic Modern Americana.

Born in Germany to Russian and German parents, Vladimir Kagan moved in 1938 to Manhattan, where his father opened a cabinet shop. He attended the school now known as the High School of Art and Design and studied architecture at Columbia. Fours years out of high school, in 1949, he designed his first signature collection, “Tri-symmetric”: furniture on three legs. A chair from the collection later earned the Museum of Modern Art’s “Good Design” Award. Mr. Kagan went on to design the General Electric Pavilion with Disney for the 1967 Montreal Expo; the offices for Prudential Insurance Co. and Warner Communications; and nearly six decades of furniture.

“He was forward-thinking in the ’50s and continued to keep up with movement of style and design challenges,” said Kevin Stayton, chief curator of the Brooklyn Museum, which awarded Mr. Kagan its 2002 Modernism lifetime achievement award. Recently, Mr. Kagan has experienced a bit of a renaissance. “He thought he was retired in 1997, but Tom Ford had him redesign and reissue his Omnibus sofas for 350 Gucci stores across the country,” said Mr. Merrill. Mr. Kagan’s design studio is still “going strong,” said the author and dealer, “and he blogs!”

On Dec. 15, Phillips de Pury & Company will sell one of Mr. Kagan’s “Floating Seat and Back” sofas (estimated price, $20,000 to $30,000) as part of the Design Masters auction. (Six of these sofas were reproduced. with some modifications, for the Museum of Arts & Design’s restaurant on Columbus Circle.) The sofas ease conversation, the designer promised, because people look at each other instead of posing in a straight line like “birds sitting on a telephone wire.”