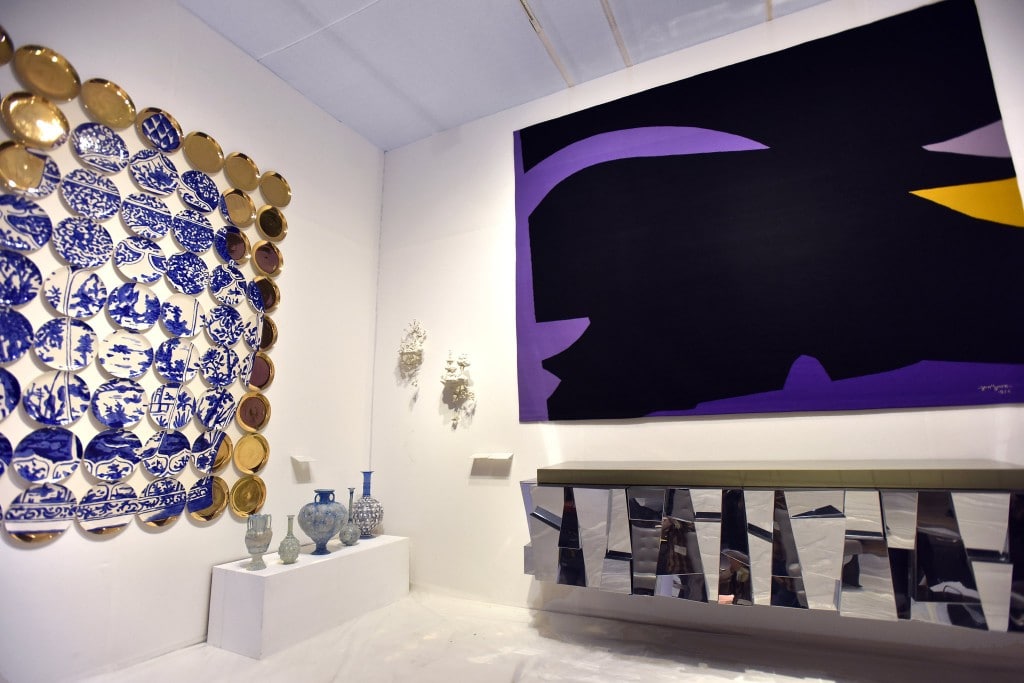 The Winter Antiques Show is a short-lived galaxy of colliding worlds. Nearly every booth provides a glimpse into some areas of visual culture, from Egyptian antiquities to American folk art to postwar Italian art glass.

The collisions at this year’s show at the Park Avenue Armory are greater than ever because the cutoff date for material has been moved to the present from 1969. One dealer — referring to show’s tradition of fine furniture — observed that this iteration is “less brown” than its predecessors.

Things get going with the featured exhibition, a lively potpourri of works organized by the Wadsworth Atheneum Museum of Art in Hartford and introduced by a Jack Pierson sculpture that is all but site-specific in this setting: It consists of the text shorthand OMG spelled out in mismatched letters from vintage signs. It hovers above abstract paintings by Ellsworth Kelly and Franz Kline; a portrait by Élisabeth Louise Vigée Le Brun and an early exceptional landscape (with travelers) by Frederic Edwin Church. Especially notable is a thronelike “Charter Oak Chair,” a tour de force made from a tree that played a crucial role in Connecticut colonial history.

Several booths offer OMG moments. Front and center at Gerald Peters is a formidable bronze urn by the American sculptor Paul Manship. Lost City Arts has a bronze gong slightly smaller than a door, by Harry Bertoia, and a small orchestra of his other sound sculptures. And the display at Robert Young is crowned by the large molded copper face of a clock from around 1800 that once adorned a turret in Yorkshire, England. Don’t miss a little gem tucked in a corner: the naïve bust of an English woman with staring eyes, carved in pine around 1890.

The new cutoff date alleviates some of the show’s traditional stuffiness. For example, Elle Shushan, in addition to the portrait miniatures from times past that are her specialty, is showing photographs in the same style by Bettina von Zwehl, a contemporary artist. At Liz O’Brien the 20th-century furnishings include a pair of white-lacquer bookcases by John Dickinson from 1978; their looming, robustly sculptural forms expand upon Paul Frankl’s “Skyscraper” cabinets of the 1920s. And Joan B. Mirviss has mounted a little show of some of the last tea bowls and water jars of Kato Yasukage, a 14th-generation Japanese potter who died in a car accident in 2012. For context there’s a cluster of ceramic vessels by his elders (“deceased Japanese national treasures”), including four by the great Shoji Hamada that cover 30 years of his remarkable development.

At Todd Merrill, a newcomer to this fair, nearly everything dates from after 1969, starting with “Three Mauves,” a booming tapestry by the Flemish-American artist Jan Yoors. Its style is hard-edge Color Field, its date, around 1976. It overlooks an aggressively faceted console in chromed steel (1973) by Paul Evans and several large vases from 2015 by Shari Mendelson. Made of plastic trash and foil, they both parody and pay homage to ancient glass. Mr. Merrill seems to favor a high-spirited incompatibility that is unusual here.

At Olde Hope Antiques a large lion in wood relief blends perfectly with all the American folk art there, but closer inspection reveals that it was made by the ingenious Bernard Langlais in 1963. At Geoffrey Diner, barrel chairs in iron and leather that might almost be Wiener Werkstätte are by the Swedish designer Mats Theselius, from 1991. They share an ornate Arts and Crafts carpet by C.F.A. Voysey with an outstanding burl coffee table by George Nakashi

Another newcomer is Kagedo, a veteran of the Asian art fair once staged at the Armory, where nearly every piece argues for the overlooked strengths of early 20th-century Japanese modernism. The layered colors and carved lava-lamp forms of a small lacquer box by Tsuishu Yozei exemplifies tradition renewed. So does the abbreviated naturalism of two rare river otters in bronze by Tsuda Shinobu: The animals look almost wet.

Next door, Throckmorton has brought a seemingly encyclopedic array of pre-Columbian sculptures, vessels and textiles, starting with a red Colima vessel from 100 B.C. to A.D. 250 that looks like it could have been in made in the 20th century. Nearby Stephen & Carol Huber has mounted its usual superb display of meticulously-researched embroideries and samplers. And the exceptional trove at Peter Pap Oriental rugs includes, all from the 19th century, a large and rare Suzani embroidery, dense with red flowers from Uzbekistan; a provincial Persian garden carpet that beautifully simplifies a court style; and an elegant rug, also Persian, with a spare center medallion on an empty field, made before the arrival of Victorian style.

Several first-timers have mounted immersive displays. Gemini Antiques is dense with vintage American toys, most alluringly scores of cast metal building banks, painted and plain. Galerie St. Etienne is almost all Grandma Moses paintings — including one of the wood embroideries that preceded her efforts with brush and canvas — with an outstanding John Kane landscape in their midst. The exceptionally full booth of James Infante considers several strands of European modernism, topped off by two starlike cast-glass chandeliers made in Czechoslovakia in 1931 with a decidedly sci-fi look. And Thomas Heneage Art Books offers a small library of volumes some recent and some rare behind a wall of tiny vitrines displaying antique cameos, medieval seal matrices and a little rainbow of glass paste intaglios by James Tassie (1735-99).

Certain dealers have forged complete style statements. Kelly Kinzle sets off its American folk art and furniture with wallpaper of leafy greens. H. Blairman & Sons has recreated an English Arts and Crafts study, profuse with ceramics and metalwork, including a severe toast rack from the great, peripatetic Christopher Dresser. But the high point is a group of lusterware vases with hand painted Persian patterns from the Pilkington Tile and Pottery Company. Formerly owned by the architect James Stirling, they glow from atop an exceptional desk by William Arthur Smith Benson. And Apter-Fredericks have created the somewhat startling effect of floor-to-ceiling windows overlooking Uptown Manhattan, while their arrangement of ware conjures the living room of a prewar apartment.

A tour of the show’s paintings should include the Fine Art Society, where you’ll find three canvases by Walter Sickert — most outstandingly the war-themed 1914 “Tipperary” — along with lively floral still lifes, all from the 1920s, by Ivon Hitchens, Christopher Wood and William Nicholson, Britain’s genius of light At Jonathan Boos, the centerpiece is “The Pigeons,” from 1948-49 by the Magic Realist Henry Koerner, which encompasses income inequality, childhood fear, racial strife and romance, all on a pink marble stair shown to be made of brick. At Adelson there is “Private Way,” one of Stuart Davis’s very best early townscapes and “The Plowman” from 1942, a strong Jacob Lawrence painting. And Michael Altman has an orange-on-orange seascape that may be the largest, most Abstract Expressionist painting by Milton Avery you’ll ever see.

At Conner Rosenkranz, the two stained-glass windows by Robert Winthrop Chanler that flank a Beauford Delaney abstraction once graced the studio of Gertrude Vanderbilt Whitney, founder of the Whitney Museum. Their turbulent compositions are at once seductive and a bit disturbing. In all, there is much to see.

Correction: January 23, 2016
Because of an editing error, schedule information on Friday with an art review of the Winter Antiques Show, at the Park Avenue Armory in Manhattan, misstated the website and telephone number for more information. The website is winterantiquesshow.com, not armoryonpark.org, and the telephone number is 718-292-7392.