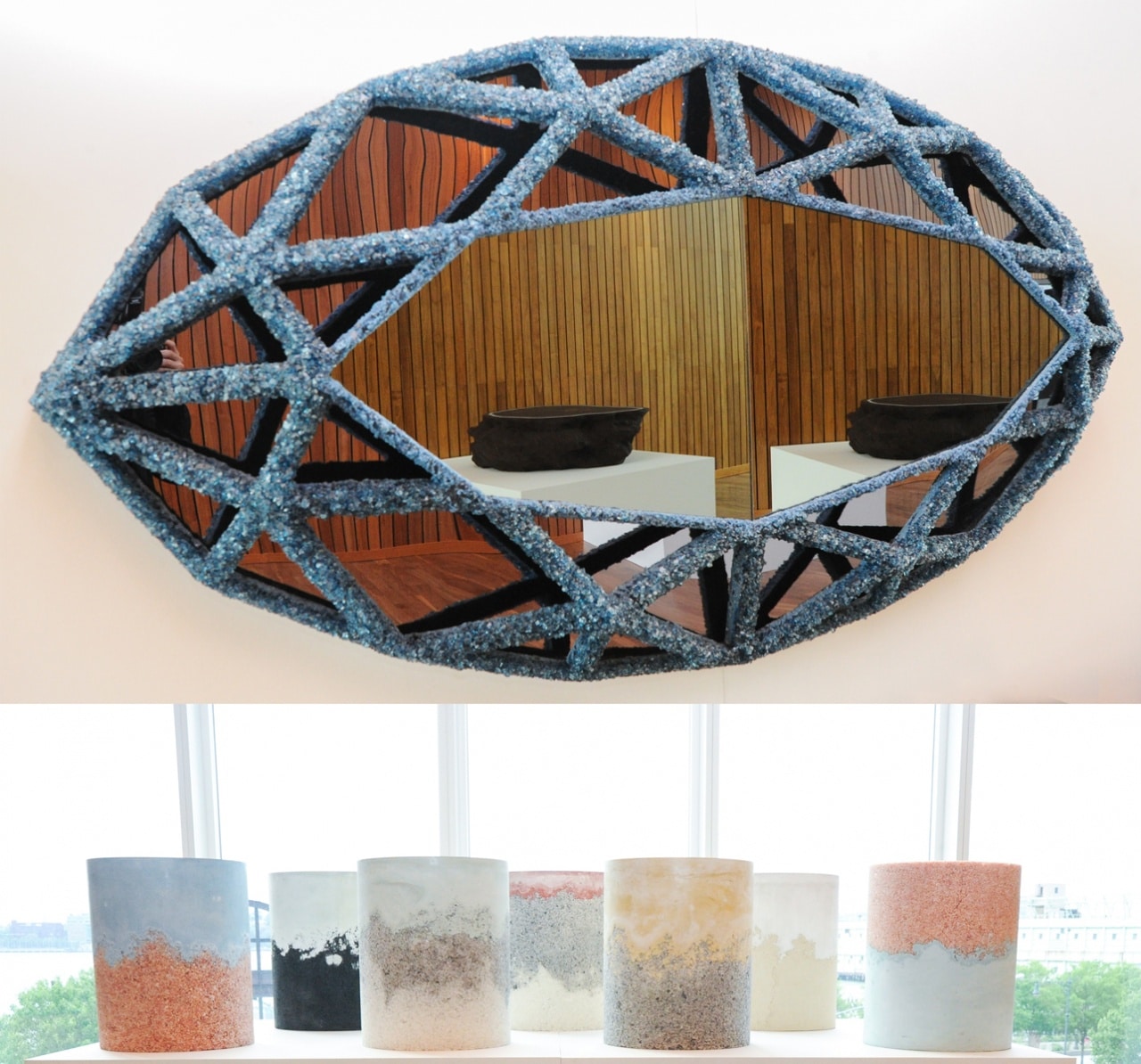 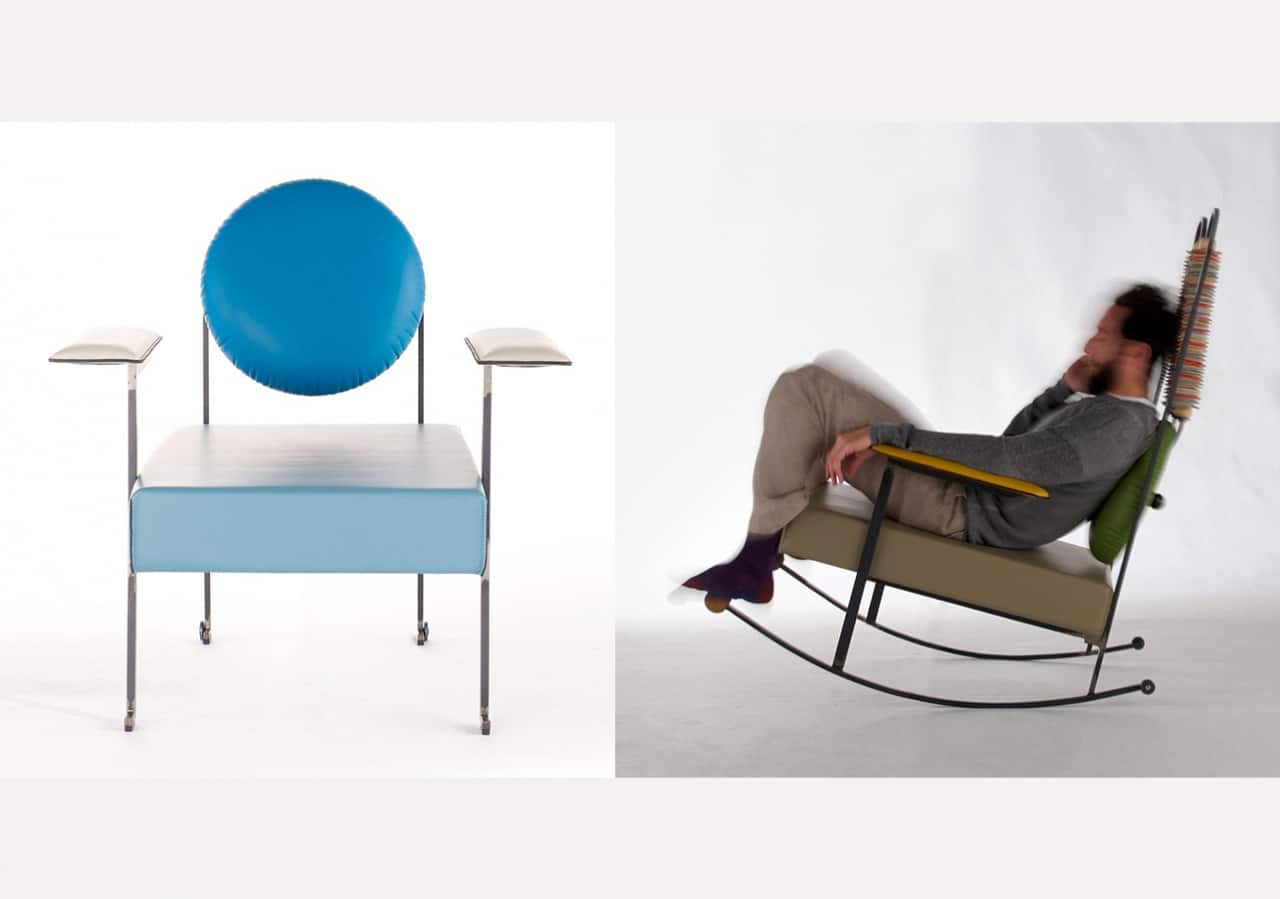 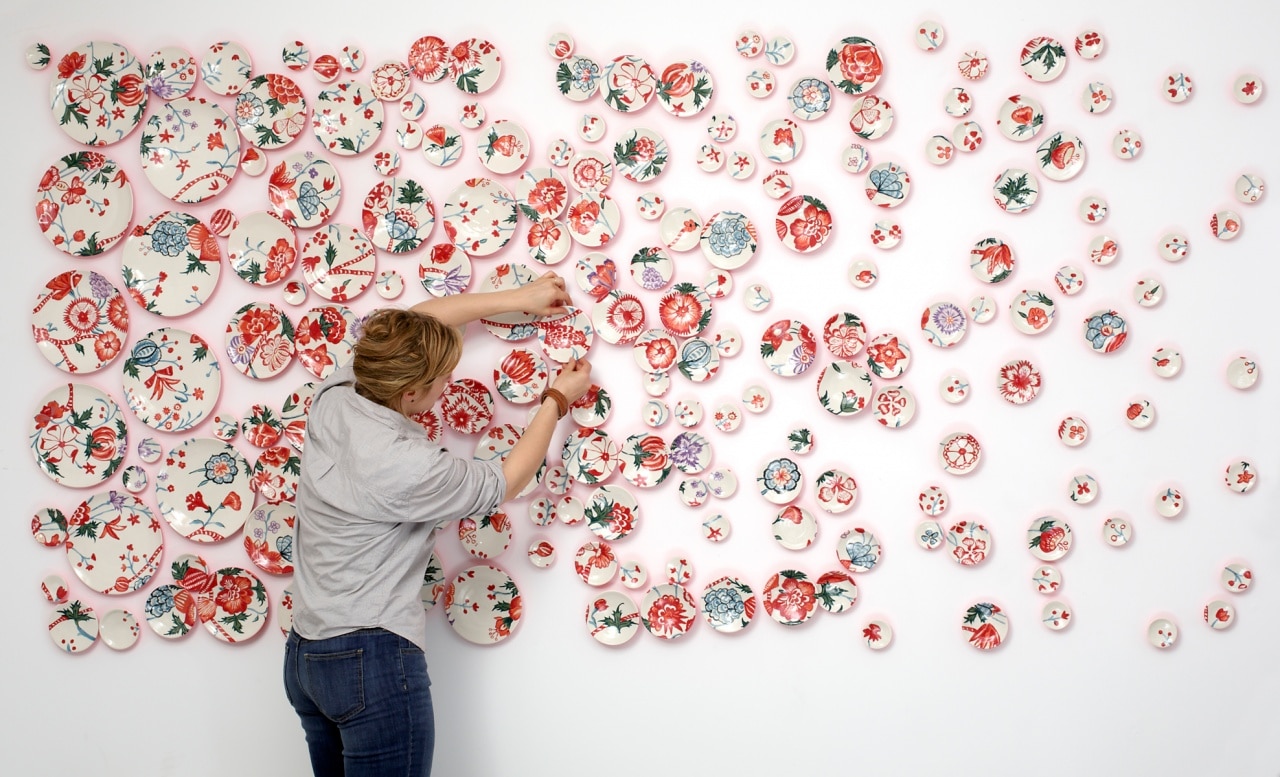 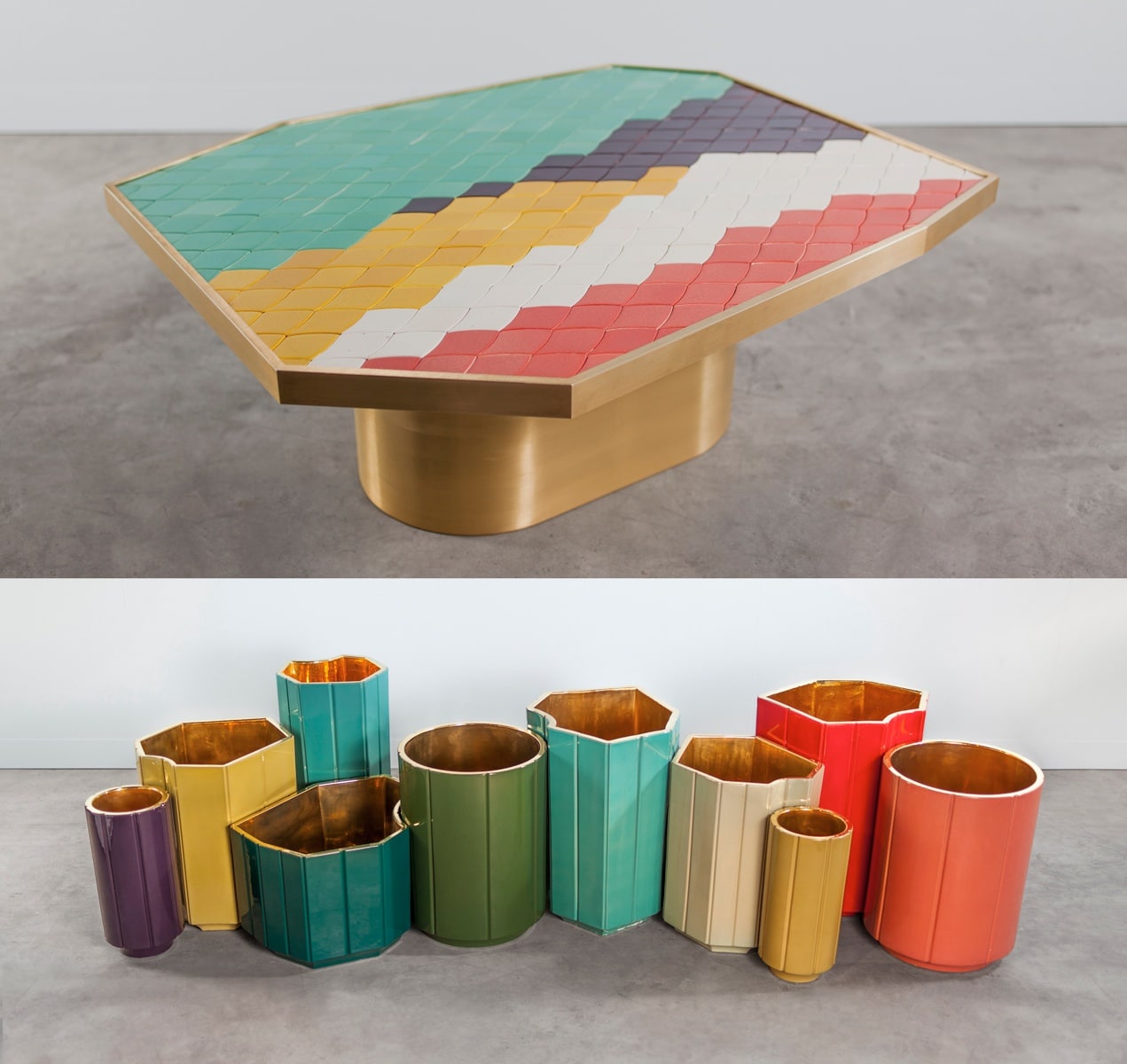 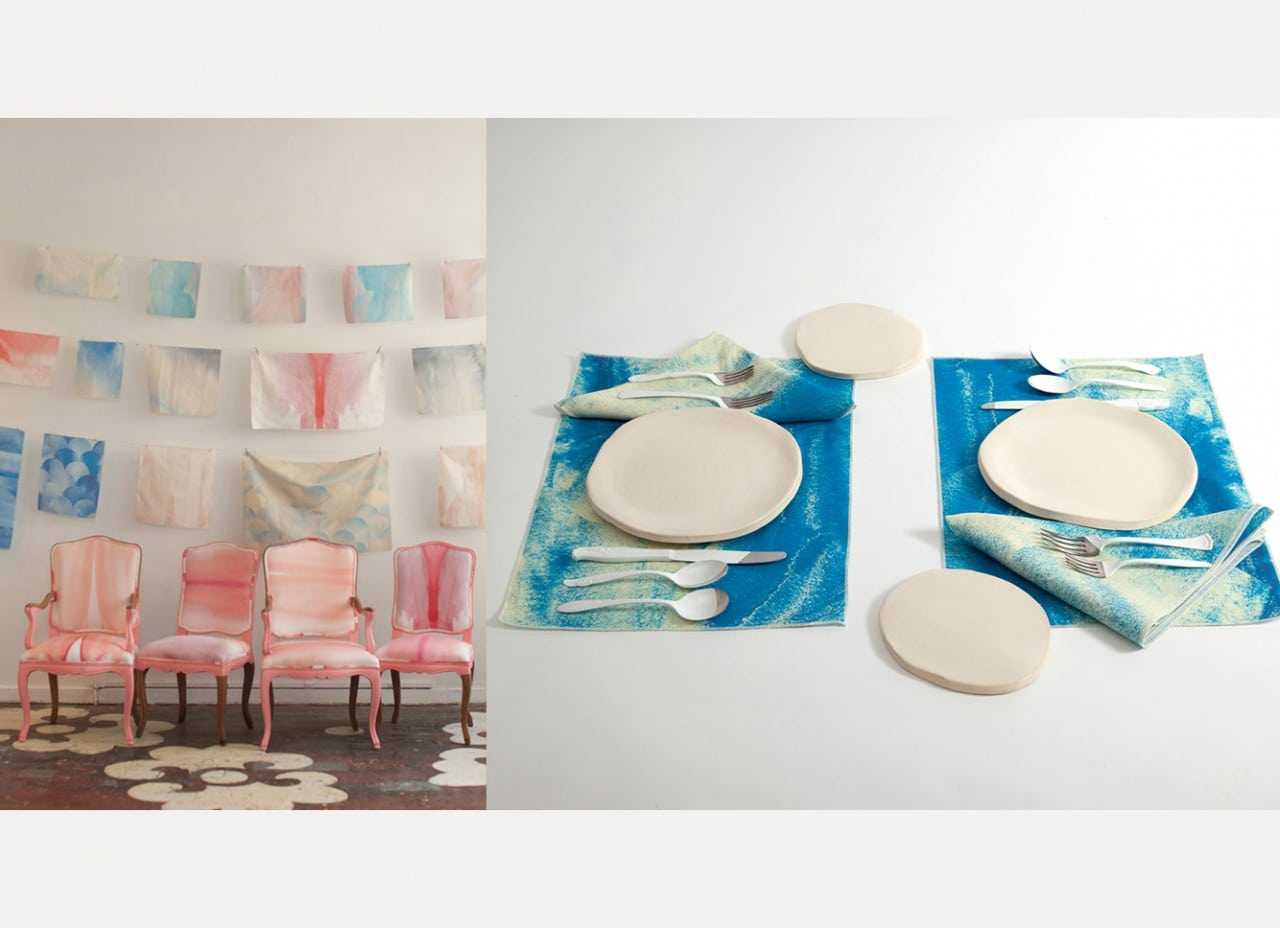 Photo: Courtesy of Department of Decoration 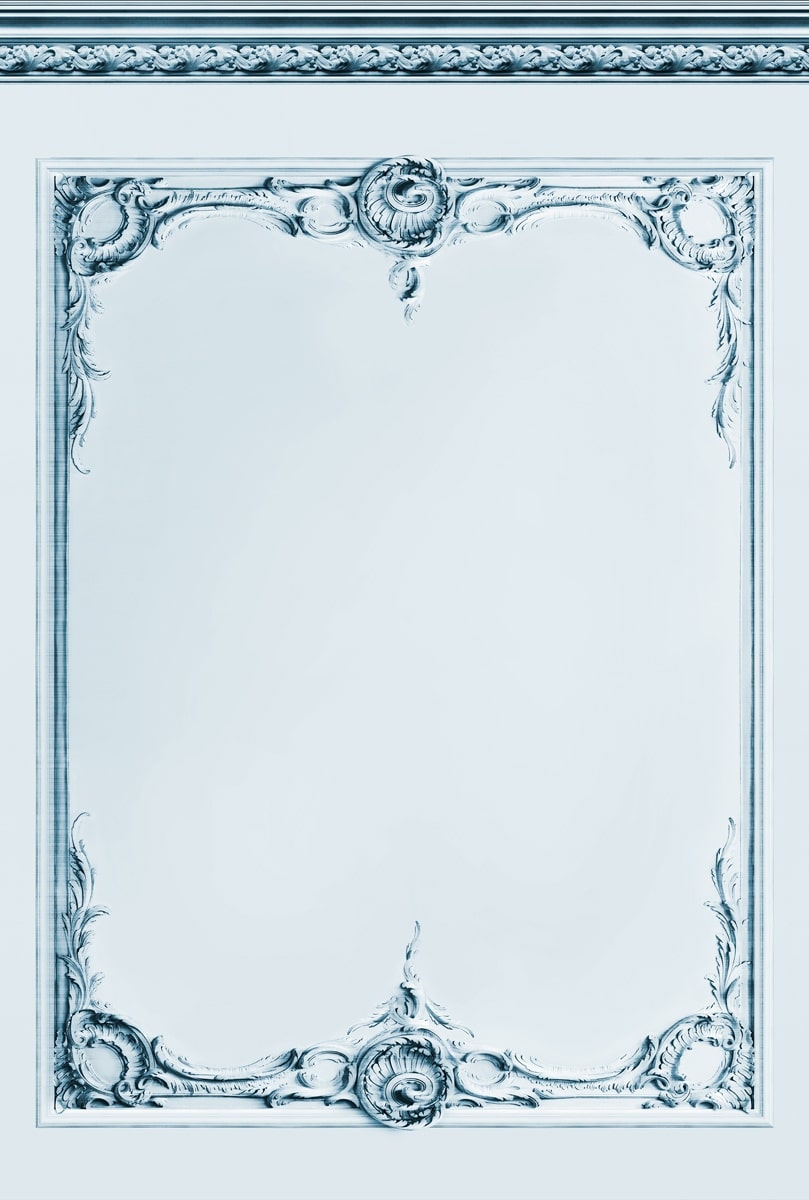 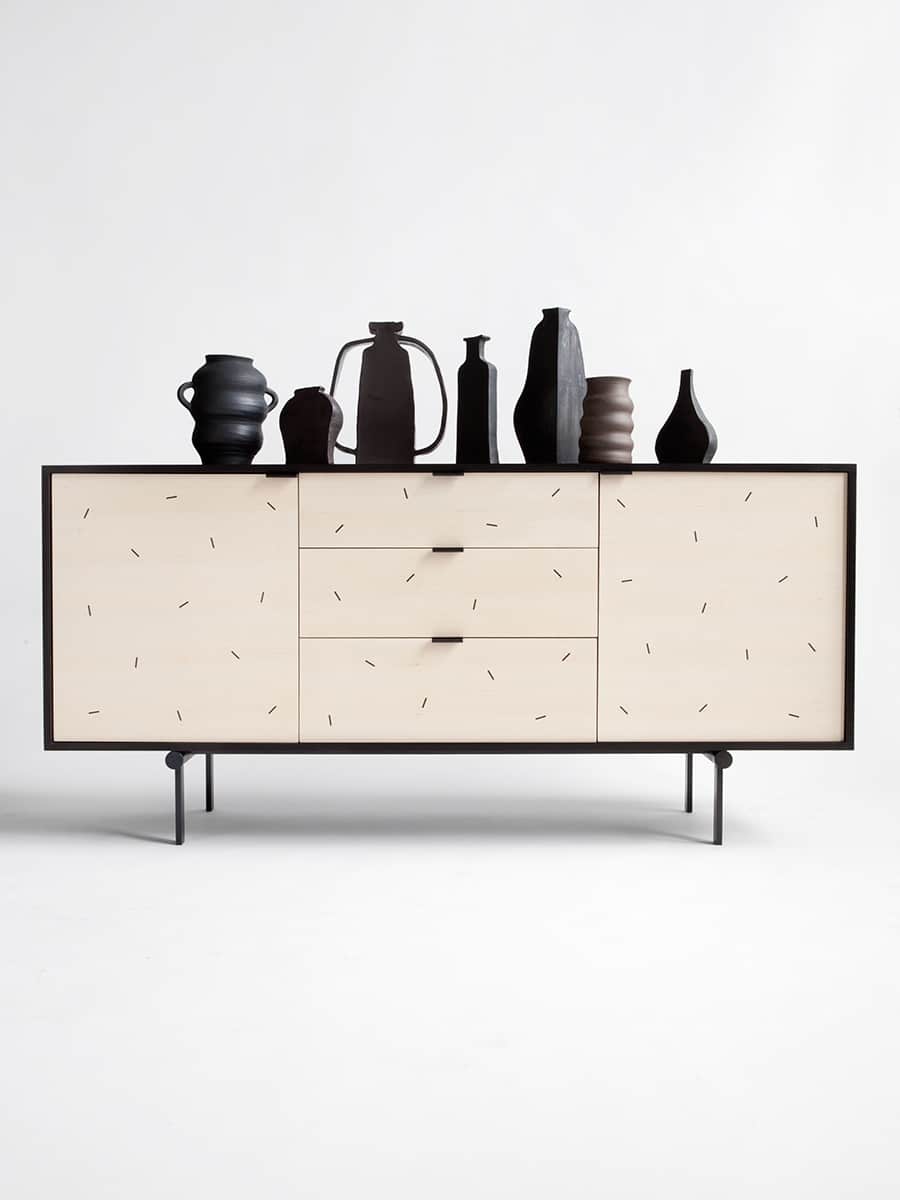 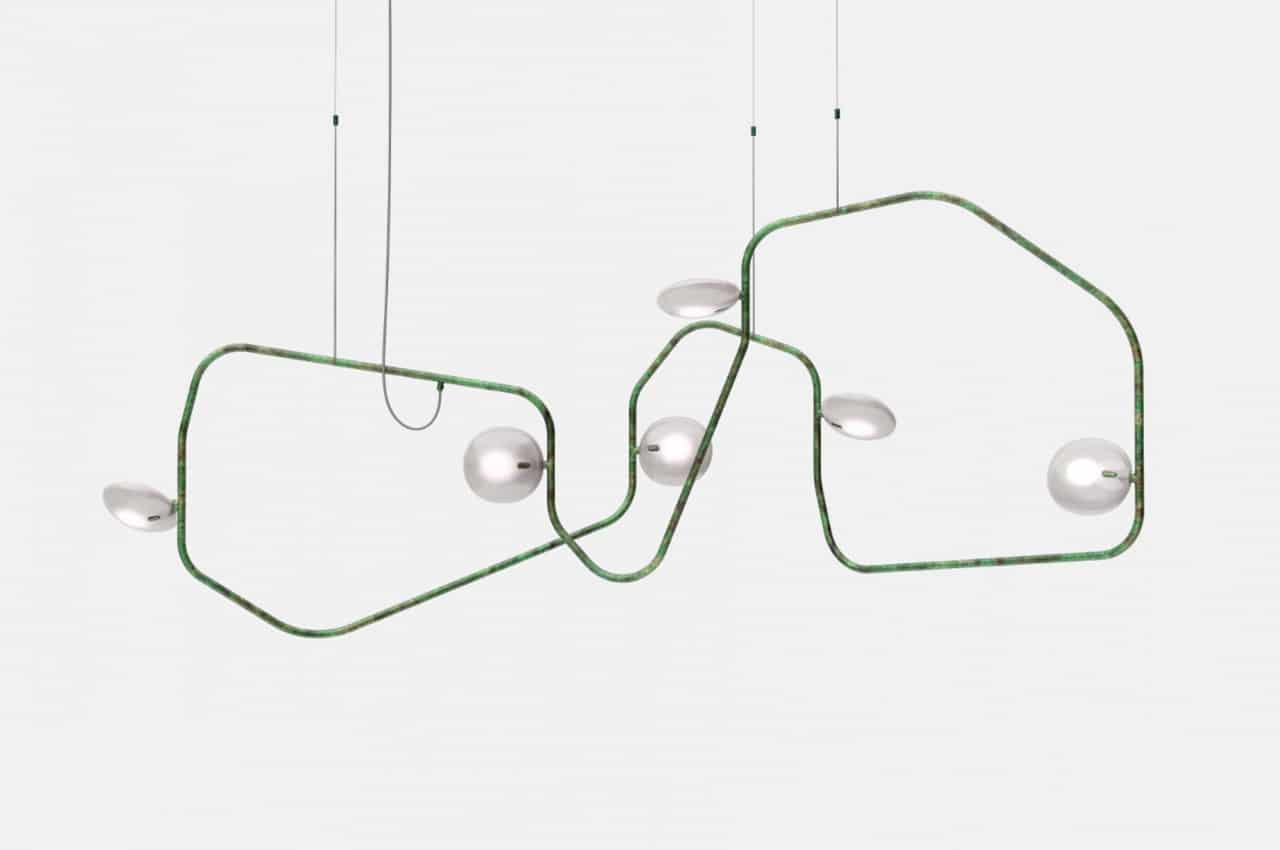 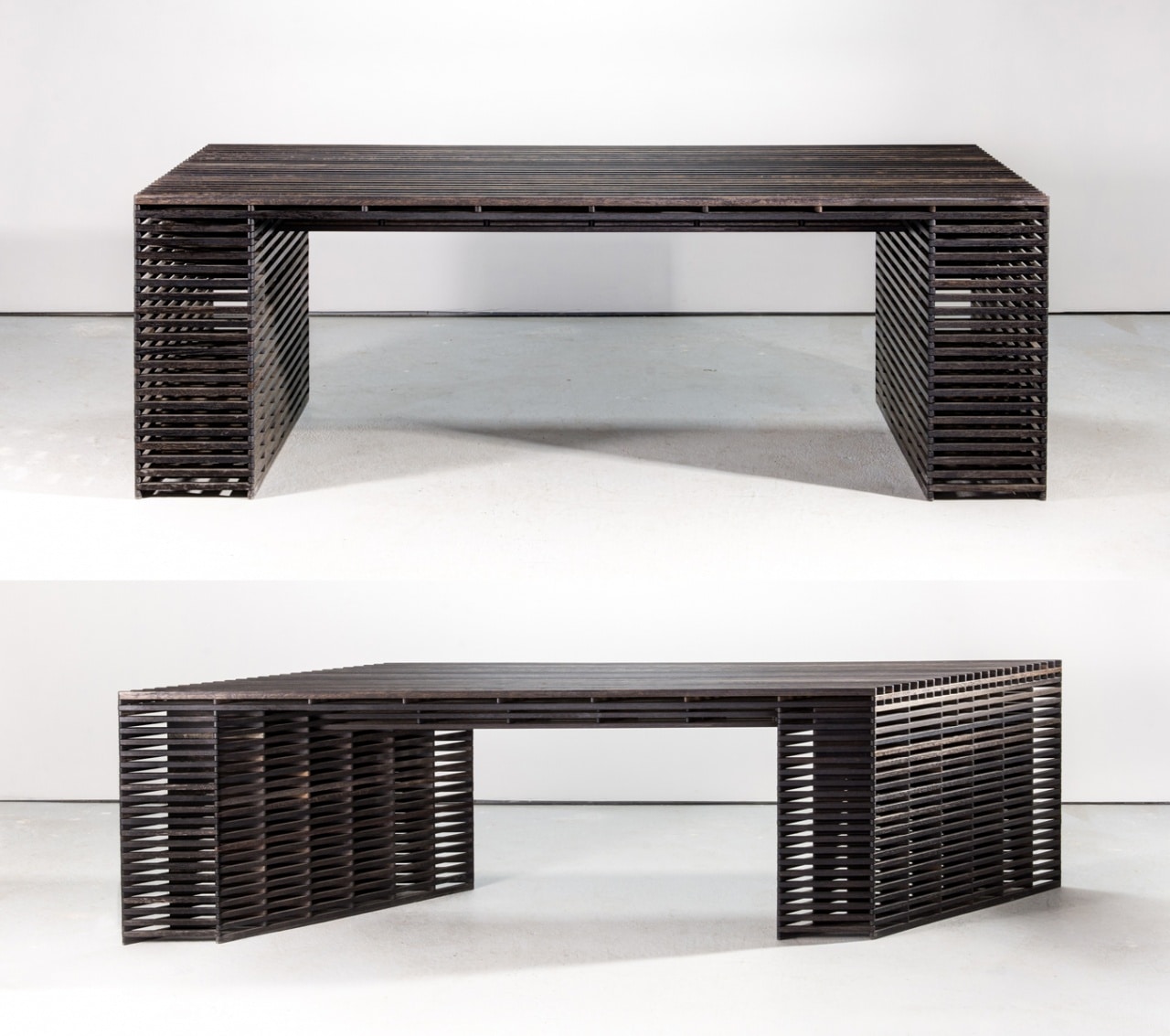 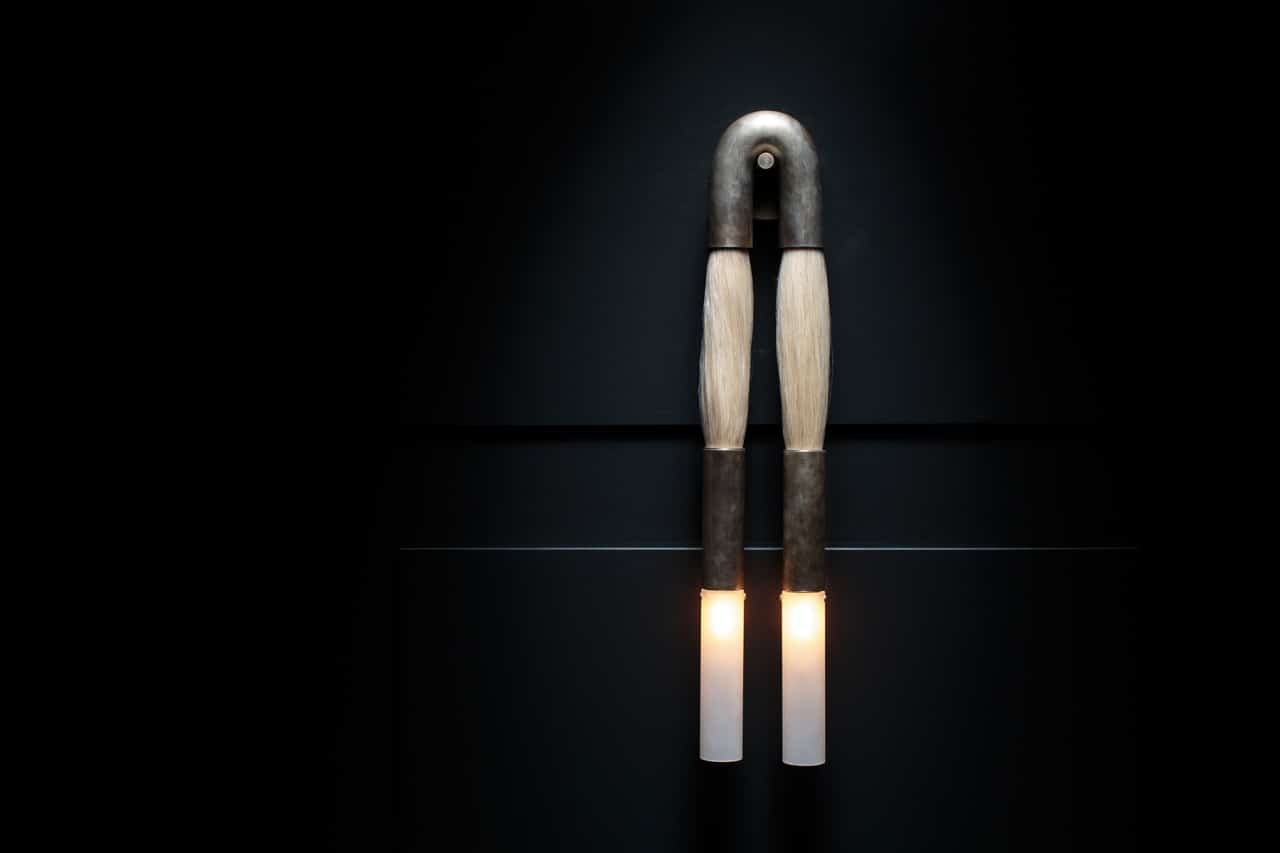 New York’s design fairs, which descend en masse each May (furniture’s Fashion Week, to put a metric on it), have proliferated of late with the advent of smaller format alternatives to the de rigueur International Contemporary Furniture Fair. Collective 2 and Sight Unseen OFFSITE, particularly, were rich with young talent, making these shows charged and relevant. The mood, from the more established brands to neophytes alike, was a kind of playfulness, blending surprising materials and challenging perceptions—and showing us something new. Here, a roundup of highlights.

AMMA Studio
One of the more attention-garnering, exceptional launches of the month, AMMA Studio is a collaborative frisson between interior designer Samuel Amoia and sculptor Fernando Mastrangelo. The pair, who seeks to “combine natural and organic materials into strong and functional” furniture, offer a range of sculptural tables, mirrors, and stools that revel in unexpected materials—from sprinkles (yes, the kind you put on ice cream) to Himalayan salt and copper beads. Their amorphous coffee table, made of coffee grinds, toes the line of kitsch to become playfully brilliant, while garden stools in somber black to mint green and peachy pinks marry traditional plasters and rock salts to elegant effect.

Mario Milana
After years of working as a senior designer for Karim Rashid, Mario Milana launched his first namesake collection this spring at Salone Internazionale del Mobile and Sight Unseen OFFSITE. His series of wiry, conceptual-looking chairs—from rocking to dining—belie their comfort and the designer’s unwavering devotion to ergonomics. “I always aim for the chair to adapt to the user rather than the other way around,” the Milanese designer says of his work. While hints of Bauhaus and Memphis are evident in his sculptural approach and use of color respectively, Milana is focused foremost on the interaction between the individual and the object: “The aesthetic is a true product of its functionality.”

Molly Hatch’s Recite
Debuting at Collective 2 and represented by Todd Merrill, Molly Hatch’s 199 hand-thrown porcelain plate installation, Recite, is based on an eighteenth-century Indian chintz. Having found the inspiration in Cooper-Hewitt’s voluminous textile archives, Hatch draws out elements from the original in an attempt to pinpoint the way the eye reads pattern, “riffing on the historic as a musician may riff on a musical score.” The Massachusetts-based designer, who also has a 456-plate work, Physic Garden, currently on display at the High Museum of Art in Atlanta, aims to reinterpret traditional floral vernacular into something contemporary—and creates something beautifully familiar yet disorienting.

India Mahdavi, “Landscape”
The Beirut-based Carwan Gallery’s exhibition of designer and architect India Mahdavi’s “Landscape” series was awash in warm gold-tones and color-saturated tile. The collection, comprised of tessellating snakeskin-like tables and incongruously shaped vases that meld into vibrant constellations, represent the designer’s fascination with color theory and offer an “alternative to sunshine or shade.” Mahdavi collaborated with the Iznik Foundation’s ateliers, which maintain the sixteenth-century Ottoman techniques in ceramics; her use of traditional tile in unexpected combinations and applications seeks to “question the perception of indoor and outdoor spaces.”

Department of Decoration, “Dining Room”
Payton Cosell Turner and Brian Kaspr, the wife and husband team behind the Brooklyn-based specialty wall-covering company Flat Vernacular (famous for their sticker wallpaper), have taken their handmade, one-of-a-kind approach and translated it into a new platform for home ware. Department of Decoration, which launched on May 14, offers objects designed for the spaces in which they are used; their first, “Dining Room,” was inaugurated by a five-night fete hosted by the Spring Street Social Society. Guests dined using items from the new collection, including colorful powder-coated antique silverware and trays, hand-printed linens, and restored chairs painted and upholstered (part of a collaboration with Chairloom) in their watercolor-like fabrics.

Trove, Rinceau
Trove, known for surrealist wallpapers manipulating the scale and tone of various photographs (everything from rolling waves to flying birds), remains true to form with Rinceau, which it launched during ICFF. The large-scale trompe l’oeil wallpaper detailing filigree molding is based on the Baroque style that designers Randall Buck and Jee Levin so frequently find themselves influenced by. The period’s emphasis on shadow and light are “fundamental elements” of the New York wallpaper company’s vocabulary.

Keiko Narahashi, “Pots, Picturehood” (featured on Syrette Lew’s Confetti credenza)
New York–based artist Keiko Narahashi began working with clay five years ago as a vehicle for exploring the relationship between silhouette and identity. Her collection of sliced and sculptural one-of-a-kind vessels, many of them solid, recall elements of basalt Wedgwood, and the original classical silhouettes on which they were based—however, her work is anything but derivative. Narahashi revels in the juxtaposition of dimension and “flatness,” the combination of familiarity and strangeness in one piece: “They take on human qualities—at least in my mind.”

Rich Brilliant Willing, Palindrome
Theo Richardson, Charles Brill, and Alexander Williams have made a splash in New York’s local industrial design landscape since graduating from RISD in 2006 and starting their company a year later. Having since focused exclusively on lighting, the trio creates minimalist yet highly considered work. Their latest, Palindrome chandelier, which launched at Sight Unseen OFFSITE, is exemplary of that spirit—described as “part lighting, part kinetic sculpture,” the looped chandelier has a modular frame and glass heads that rotate according to space and preferences prior to installation, allowing for “infinite possibilities of unique combinations.”

Ian Stell, Big Pivot
Ian Stell’s Big Pivot table transforms from slender console to dining table, in what the Brooklyn-based designer calls a “kind of dance,” woven through the entire form and “creating shimmering moiré patterns.” His work has a fundamental lyricism to it—the practical becomes playful and elegant in its very transition. Function and aesthetic integrity have a symbiotic relationship in Stell’s hands, and are intrinsic to his mutable body of work. But perhaps the designer puts it best: “Although I have a deep admiration for the reductive design approaches of so many 20th-century master practitioners—boiling ideas down to their essence—I don’t work this way. I celebrate the dense rhythms and rich patterns one can only achieve by embracing complexity.”

Apparatus, Horsehair sconce
One of the more unexpected materials on view, at least in its application, was Apparatus’s Horsehair sconce. Bound in brass and etched glass, the thick, ropelike horsehair looks as though it is draped over a hook, though immutable and permanent in its effect. The play of textures and the simplicity of the silhouette make for a light both restrained and disarming, and lend a sort of Roman quality to it. Creative director Gabriel Hendifar hopes viewers have a hard time discerning which era his work hails from: “Our aim is to create fixtures that combine modern form with worn-in, soulful materials.”