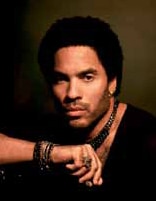 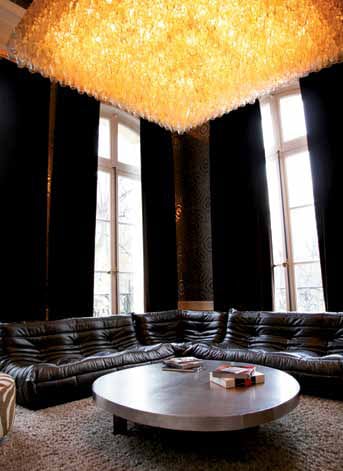 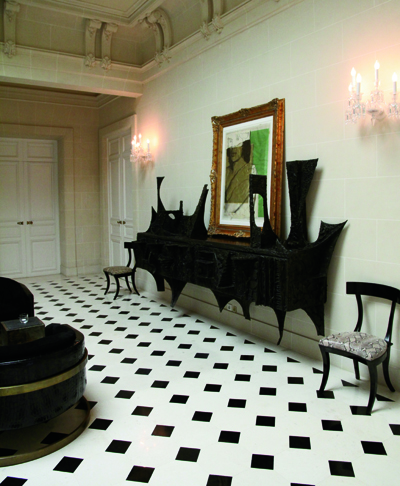 In the gallery on the second floor landing of the Paris town house is Paul Evans’s one-of-a-kind Monster console of c. 1970.

Over the course of two decades, four-time Grammy Award-winner Lenny Kravitz established himself as a superstar rocker, songwriter, and producer. Lately, he has built two other careers: one as a supporting actor in such films as Precious and The Hunger Games, and the other as an interior designer. For Kravitz, design is not only a passion, but also an integral part of his lifestyle and cultural agenda.

He also began collecting postwar furniture and objects when the market was in its infancy and has developed a personal, expressive, and highbrow style that mirrors his music. Like the latter, which incorporates elements of rock, soul, funk, reggae, hard rock, psychedelic, and folk, his design collection consists of contradictory elements: pop, brutalism, modernism, and expressionism.

MODERN Magazine spoke to Kravitz about his collection, about acquiring taste, living with music and design, his aesthetic sensibility, and about what really matters to him when collecting design.

I have read many interviews with Lenny Kravitz the superstar musician, the designer, the movie star, the producer, but never as a design collector. Is collecting design an important part of your active life?
It is very important to me. To me, collecting is first of all about learning, exploring my own taste, navigating color, shapes, textures. It is really about finding out what I truly love. The mix of objects, the juxtaposition of art and objects, and crafting spaces, are all things I find inspiring.

What does it mean to you to be a design collector?
I collect design because I want to live with great objects that I love. I never acquire furniture to put in storage, and I never buy design for the sake of investment.

When did you start collecting design?
I have collected design for many years, actually since my first album came out, but I seriously started collecting postwar design at the level I do now in the past ten years.

Tell me about your design collection. What do you collect?
My collection consists mainly of postwar American and European design dating from the mid-1940s through the 1980s. One of my favorite designers of this era is Paul Evans. I own one of his great pieces, known as the “Monster,” which he did in the 1970s. That sculptural object tells the entire story of Evans’s aesthetics, because it is sensual, monumental, edgy, organic, and full of energy. It is both beautiful and unique, a one-of a-kind sculpture that I am happy to see on the landing of the second floor at my home in Paris.

How important is it to you to collect objects that are rare and unique, one-of-a-kind, versus mass-produced design?
It is really not that important to me, and I would welcome a mass-produced piece as much as a one-of-a-kind one as long as the design is good. Even if many people own it, or if it doesn’t have a particularly high monetary value, I would still love to have it as long as I love it. I am much more interested in the artistic value of design than in its price. There are numerous objects that were mass-produced in my collection.

Give me an example.
In my home in the Bahamas, I have Eames chairs, of the same type constantly offered in galleries and auction houses. Although many people have the exact same chairs, they work well in my home, and contribute to the creation of the space. I tend to furnish my home in Paris with unique and rare pieces.

How have you developed and obtained your own sense of style and taste?
When I was growing up, I was constantly surrounded by people of great style. Both my parents were artists who constantly took me to the theater, to museums; some of their friends had great homes and stylish furniture. Growing up this way, my taste had begun to be developed at a fairly young age. I first visited the Metropolitan Museum of Art when I was five and it has since become my backyard.

What is your favorite museum?
I love the Museum of Modern Art and the Guggenheim, but the Met has a special place in my heart because this is where I spent time growing up in New York. In Paris, I love the Musée d’Orsay, where I can spend hours in the impressionism galleries.

What is your favorite design gallery?
In New York I love Todd Merrill Antiques and in Paris, Galerie Yves Gastou, where I found the ceramic lamp in my sitting room, which was originally owned by German collector Gunter Sachs. At Gastou, I also acquired a coffee table by Italian designer Gabriella Crespi, which is placed in the living room of my apartment in Paris.

What does the notion of taste mean to you? Do you think that taste can be acquired, or is it something one must be born with?
Both. By increasing your knowledge in art, furniture, decorative arts, objects, and architecture, you can develop a great taste, so in this respect, taste can be acquired. However, I believe that having a sensibility for aesthetics is mandatory for developing good taste. I know that taste cannot be bought with money.

As the market of collectible design expands, trends are being set season by season. You see them everywhere, in galleries, at design fairs, and in auction houses. What are your thoughts on trends?
If we speak about French designs by Jean Prouvé and Charlotte Perriand, which are super trendy these days, all I can say is that this furniture is wonderful. But I never follow trends. In fact, many times I am ahead of the curve, as for example, I started collecting furniture by Paul Evans and Karl Springer long before they became trendy. What leads me in my collecting and in my love for design is not whether something is trendy, but rather if it speaks to me, if it is right for the environmentI want to create in my own homes. It is an emotional,organic, and artistic process when I feel that an object touches me, the inner part of me, the soul part of my creativity. There is nothing rational about this process, and I certainly must feel this way when introducing a piece of furniture into my collection.

Do you collect pieces from Paul Evans’s Cityscape series?
I do have one Cityscape console that was in a home I recently sold, and which I plan on shipping to my home in Brazil soon. Generally speaking, I like Evans’s studio work more than his Cityscape series [which he designed for Directional].

Looking at the aesthetic choices you have made, it seems that you are attracted to expressive rather than to minimalist design.
While the objects in my collection may be expressive, if you look carefully at my home, you will notice that the interiors are minimal. I don’t like to put a lot of objects in a space, but rather let them speak in a space full of voids. So I can say that I am interested in both expressive and minimalist qualities when it comes to interiors.

Do you collect work by contemporary designers?
I focus on classic postwar design, but have one contemporary piece. It is the prototype Gun lamp by Philippe Starck and it was given to me as a gift by his daughter Ara Starck after I told her how much I admired the lamp. I think that he is one of the greatest designers of our time.

Do you work with an art advisor?
No.

Tell me about Kravitz Design, your design company. How do you combine life with music with design?
I am very involved in the design company. These days, I divide my time between making films, music, and design. All three areas feed each other, and each one inspires the others. When I work on something, I am totally devoted and tend to work very hard. When I am designing, I feel that I am taking a break from my other commitments in music and films only that instead of just doing nothing, I do something I love, I design. When I create interiors, I utilize a whole other side of me. Creating interiors for others to live in is to let them express themselves in their own homes, make them experience life in a whole new way.