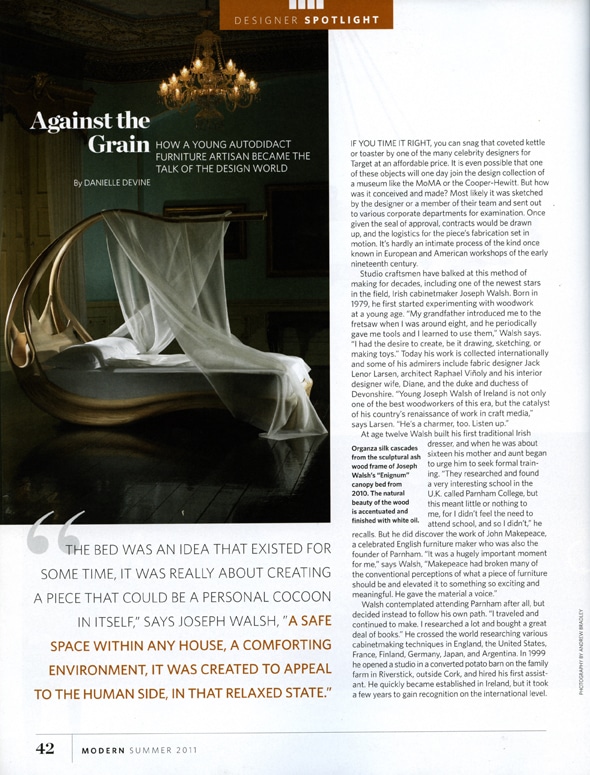 If you time it right, you can snag that coveted kettle or toaster by one of the many celebrity designers for Target at an affordable price. It is even possible that one of these objects will one day join the design collection of a museum like the MoMA or the Cooper-Hewitt. But how was it conceived and made? Most likely it was sketched by the designer or a member of their team and sent out to various corporate departments for examination. Once given the seal of approval, contracts would be drawn up, and the logistics for the piece’s fabrication set in motion. It’s hardly an intimate process of the kind once known in European and American workshops of the early nineteenth century.

Studio craftsmen have balked at this method of making for decades, including one of the newest stars in the field, Irish cabinetmaker Joseph Walsh. Born in 1979, he first started experimenting with woodwork at a young age. “My grandfather introduced me to the fretsaw when I was around eight, and he periodically gave me tools and I learned to use them,” Walsh says. “I had the desire to create, be it drawing, sketching, or making toys.” Today his work is collected internationally and some of his admirers include fabric designer Jack Lenor Larsen, architect Raphael Viñoly and his interior designer wife, Diane, and the duke and duchess of Devonshire. “Young Joseph Walsh of Ireland is not only one of the best woodworkers of this era, but the catalyst of his country’s renaissance of work in craft media,” says Larsen. “He’s a charmer, too. Listen up.”

At age twelve Walsh built his first traditional Irish dresser, and when he was about sixteen his mother and aunt began to urge him to seek formal train­ing. “They researched and found a very interesting school in the U.K. called Parnham College, but this meant little or nothing to me, for I didn’t feel the need to attend school, and so I didn’t,” he recalls. But he did discover the work of John Make­peace, a celebrated English furniture maker who was also the founder of Parnham. “It was a hugely important moment for me,” says Walsh, “Makepeace had broken many of the conventional perceptions of what a piece of furniture should be and elevated it to something so exciting and meaningful. He gave the material a voice.”

Walsh contemplated attending Parnham after all, but de­cided instead to follow his own path. “I traveled and con­tinued to make. I researched a lot and bought a great deal of books.” He crossed the world researching various cabinetmaking techniques in England, the United States, France, Finland, Germany, Japan, and Argentina. In 1999 he opened a studio in a converted potato barn on the family farm in Riverstick, outside Cork, and hired his first assist­­­ant. He quickly became established in Ireland, but it took a few years to gain recognition on the international level.

In 2003 Walsh organized an exhibition of Irish furniture designers at Fota House near Cork, which led to a commission for a twenty-foot dining table and a set of chairs for the Japanese Embassy in Dublin. This was the turning point in his career: soon he began exhibiting with Nina Yashar of Gallery Nilufar in Milan, and in 2006 he was selected to exhibit at the Sculpture Objects and Functional Art (SOFA) Fair in Chicago. His work entered major design collections, such as that of the Mint Museum of Craft and Design. In 2008 a couple urged New York gallery owner Todd Merrill to “head over to the American Irish Historical Society and see this guy’s work, he’s just a kid, only twenty-nine years old, but his stuff is amazing.” As a dealer Merrill is constantly asked to look at new designers’ work, but he had a feeling about this one. When he went to look at Walsh’s designs, “I thought the technical capability was amazing, surpassing most other cabinetmakers I know and I felt sure his designs would evolve further over time,” says Merrill. The following year Merrill took Walsh’s work to the Pavilion of Art and Design (PAD) show in London—the first time his pieces would be seen at a major international fair. This is where Walsh unveiled “Enignum I,” a cold carved, curvilinear and layered burl olive ash table. The table is part of a series that is in large measure a meditation on time, Walsh explains: “Time seems to be a very intangible thing, and it is hard for us to define it. Yet the material things around us are the result of time: rock formations, the build-up of growth rings in trees—they all equate to time.”

Walsh has spent much time building the right studio team. “It’s nice to have a small studio where you can get through a body of work but have a synergy as well, rather than working as a designer in isolation and sending something out for fabrication.” The studio, still in Riverstick, includes makers and designers from all over the world, each with their own traditions and style. In January 2006, for instance, Walsh traveled to the famous Japanese school Shinrin Takumi Juku in Takayama, where he studied under a master maker. Soon thereafter, two students from the program joined his team. Although Walsh thrives on having a mix of makers from all over the world, he realizes it’s necessary for each piece to reflect a common workshop language. Five years ago he asked a former principal at Parnham College, Robert Ingham, to act as a consultant. Ingham visits Walsh’s studio every year for three months to work with the makers to retain a cohesive style in each piece.
When a client commissions a piece from Walsh, they’re told that it will take about a year from inception to completion. The first phase is modeling and development, during which the studio produces 3-D drawings along with a miniature of the piece for the client’s perusal. Next comes the selection of wood, which is then put through secondary drying for up to three months. “We have to allow a good period of time for this process because, of course, you’re using solid wood with a particular growth pattern,” says Walsh. They take pains to monitor the wood as it dries, he adds, because the form the grain takes can be “less predictable than the nice, uniform, straight grain, of a typical commercial type of wood.” Over the years Walsh has cultivated relationships with a handful of small sawmills, he says: “They know what I like, so they contact me when they get in something special.”

This past December at Design Miami, the Viñolys purchased Walsh’s twenty-foot-long “Enignum II” table for $145,000 on opening night. The table took Walsh and his team two years to complete and it will be housed in a new residence the couple is building in Uruguay. “It’s a mixture of function and fantasy, the product of somebody who has a lot of imagination and also the capability of turning that imagination into a product—I’m not going to use it as a dining table I’m going to use it as a freestanding piece,” says Diane Viñoly.

It’s rare for the Viñolys to find a piece of contemp­orary design that impresses them enough to add to their private collection, but you know a designer’s work has staying power when the duke and duchess of Devonshire decide it merits a place in the galleries of Chatsworth House in Derbyshire, England. The house’s collection helps tell the story of every duke who has ever lived there. After the current duke and duchess visited Walsh’s studio, they commissioned two “Enignum I” chairs for Chatsworth’s galleries. “It is a real honor having one’s work placed in what is one of the great historic collections,” says Walsh.

2011 promises to be one of the most significant years so far for Walsh’s studio. He is currently working on a major installation piece for the Swarovski Crystal Palace project as well as pulling together a solo exhibition at the Oliver Sears Gallery in Ireland. “He’s doing things in wood that no other cabinetmaker has imagined being able to do,” says Merrill. Already mentioned in the company of legendary studio furniture makers like Jack Roger Hopkins, Sam Maloof, and Wharton Esherick, Joseph Walsh has clearly arrived.