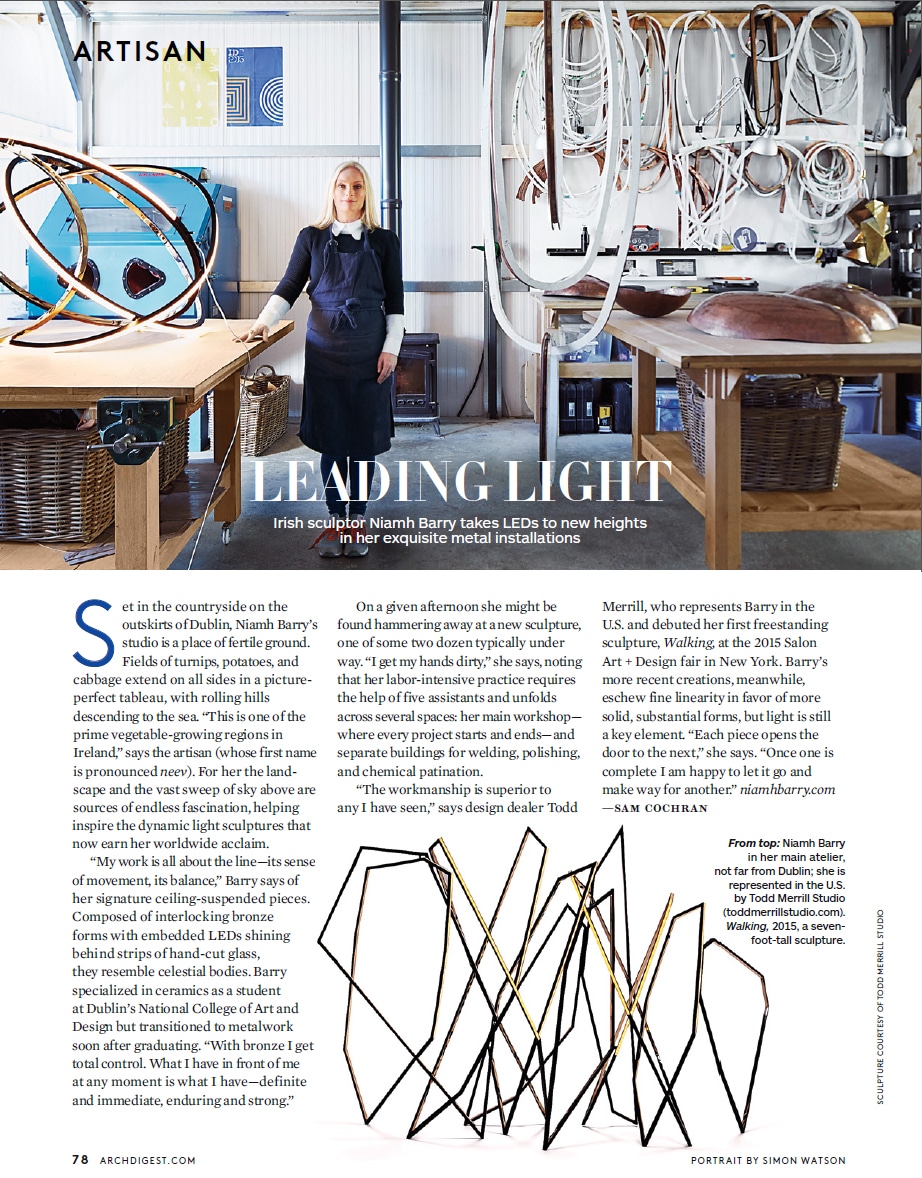 Set in the countryside on the outskirts of Dublin, Niamh Barry’s studio is a place of fertile ground. Fields of turnips, potatoes, and cabbage extend on all sides in a picture-perfect tableau, with rolling hills descending to the sea. “This is one of the prime vegetable-growing regions in Ireland,” says the artisan (whose first name is pronounced neev). For her the landscape and the vast sweep of sky above are sources of endless fascination, helping inspire the dynamic light sculptures that now earn her worldwide acclaim.

“My work is all about the line—its sense of movement, its balance,” Barry says of her signature ceiling-suspended pieces. Composed of interlocking bronze forms with embedded LEDs shining behind strips of hand-cut glass, they resemble celestial bodies. Barry specialized in ceramics as a student at Dublin’s National College of Art and Design but transitioned to metalwork soon after graduating. “With bronze I get total control. What I have in front of me at any moment is what I have—definite and immediate, enduring and strong.

On a given afternoon she might be found hammering away at a new culpture, one of some two dozen typically under way. “I get my hands dirty,” she says, noting that her labor-intensive practice requires the help of five assistants and unfolds across several spaces: her main workshop where every project starts and ends—and separate buildings for welding, polishing, and chemical patination. “The workmanship is superior to any I have seen,” says design dealer Todd Merrill, who represents Barry in the U.S. and debuted her first freestanding sculpture, Walking, at the 2015 Salon Art + Design fair in New York. Barry’s more recent creations, meanwhile, eschew fine linearity in favor of more solid, substantial forms, but light is still a key element. “Each piece opens the door to the next,” she says. “Once one is complete I am happy to let it go and make way for another.” — Sam Cochran

From top: Niamh Barry in her main atelier, not far from Dublin; she is represented in the U.S. by Todd Merrill Studio (toddmerrillstudio.com).