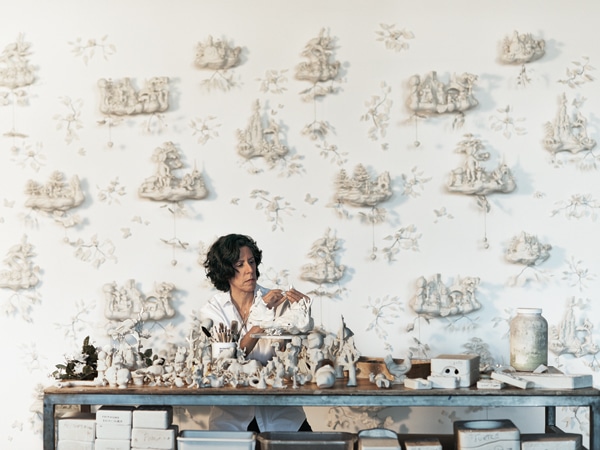 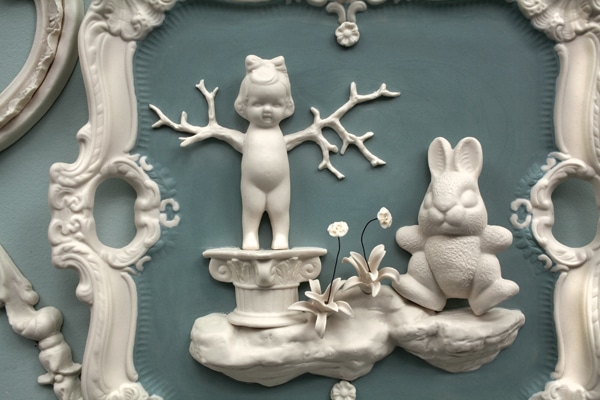 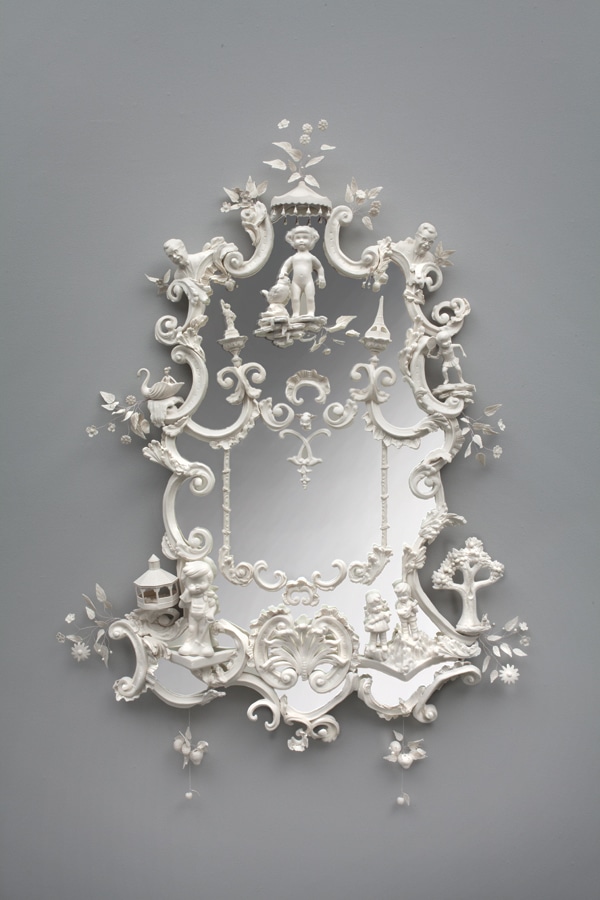 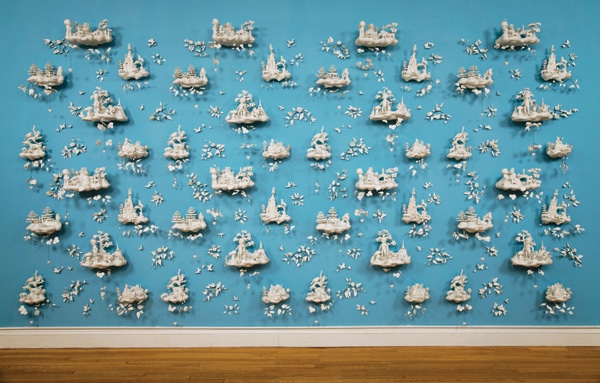 When Beth Katleman pitched her concept to Greenwich House Pottery’s Sarah Archer in 2009, she had no inkling that her career was about to soar into the stratosphere. What she did have was a clear image in her head of an ornate, immersive installation composed of multiple Rococo-inspired ceramic islands that, upon closer inspection, would reveal tiny porcelain inhabitants engaged in surprisingly dark behaviors. Fortunately, Katleman got the go-ahead and she spent the next year creating her seminal work, Folly. The rest is history.

A New York Times review set things in motion; Folly received an almost unanimous chorus of accolades across the fine art, design, and fashion worlds and then, as Katleman puts it, “everything changed dramatically in 2011 when Todd Merrill (of Todd Merrill Studio Contemporary) walked up the dusty steps of Greenwich House Pottery in his Prada black leather jacket. All of a sudden my work was in London, Paris, Basel, Seoul, and Hong Kong!” Since that time, her work has been exhibited and acquired by private and institutional collections worldwide and regularly makes the circuit of the most influential art fairs. Katleman is the recipient of the 2011 Moët Hennessey Prize, a Mid-Atlantic Foundation grant, and a Kohler Arts/Industry Fellowship among other numerous awards.

Folly marked an important departure from the artist’s previous use of bold color and gold detailing. Katleman likens the departure as “killing the thing you love.” She now takes advantage of the purity and natural manifestation of her material to add another layer of tension to her work. The stark, unadorned white of the porcelain not only unifies the discordant elements but also falsely lulls us into thinking we have stepped into Marie Antoinette’s private chambers with riffs of harpsichord music and the swish of silk crinolines in the air. Katleman’s work, however, is anything but pastiche—she imbues her opulent porcelain assemblages with a raw 21st-century edge.

Katleman is cognizant of the fact that she walks a fine line between kitsch and high-concept art. It is largely her narrative that rescues her work from becoming a nostalgic, even saccharine throwback to a more genteel time. Katleman is drawn to the darker side of the human condition and all that lurks beneath the exterior front of how we as individuals and as a society like to present ourselves to the world. Domestic violence, sexual perversion, and rampant consumption are all free game for an incisive commentary delivered out of the mouth of babes.

It is not surprising therefore, that Nabakov’s Lolita provided the inspiration for Hotel Mirana, Katleman’s first in a series of mirror-based works that followed Folly. Admittedly obsessed with the novel Lolita, Katleman found a rich source of material in the private universe of the protagonist’s imagination wherein he indulges his fantasies with impunity. His prey, the innocent, uncultured, gum-popping Lolita, is the perfect foil for his own Old World, refined sensibilities. When these two worlds collide the result can be devastating, a scenario that dovetails perfectly into Katleman’s leitmotif of ordered chaos. “I try to create a floating world where no rules apply,” explains Katleman. The artist credits at least some of this dark humor and cabalistic worldview to her habit of working late into the night. She likes the idea of putting people at ease only to jolt them with the specter of brides teetering over the precipice in swan boats, frogs eating flies, or nymphs guarding macabre relics.

Using dime store trinkets, gadgets, dolls, and even vintage Playmobil toys, the artist spends hours making molds from which she casts the foundational components of her intricate compositions. Katleman trolls flea markets and quirky internet sites for ever more outlandish characters and props to add to her arsenal. Transformed by context and material, a plastic, mass-produced, bikini-clad figurine meant to adorn a cake at a bachelor’s party becomes a porcelain Venus sitting on a tree branch engaging a bird in philosophical reparteé. Similarly, Curly from The Three Stooges functions as a tragicomic mask befitting a Greek chorus.

Katleman freely uses analog and digital means to finalize her vision. The process begins by scanning an image of a well-researched, historical reference into Adobe Illustrator. She then picks and chooses from her personal digitized catalog of cast-porcelain characters and overlays them onto the original image like a director selecting leads for a play. Using a candidate composition as a guide, she gathers together the actual cast pieces from her studio shelves and begins to arrange them until an interesting narrative emerges. She intuitively creates new clay forms to add to the composition until she arrives at a layout that reflects an irresistible tension among the various figures. She then photographs the three-dimensional work, scans it, and refines the final layout on the computer before starting the challenging task of casting the new work.

As a visiting artist at the American Academy in Rome in the summer of 2015, Katleman was able to visit her beloved Salottino di Porcellana room at the Royal Palace of Capodimonte in Naples and immerse herself in the dazzling display of elaborate, rather prissy Italian porcelains from the Baroque and Rococo periods that feed her creative inclinations.

Katleman’s work evokes a period when ornamentation was valued for its time-consuming attention to detail, delicacy of material, and sheer over-the-top sensibility. When pressed to explain the overwhelming public tributes about her work, she muses, “We have had a steady diet of minimal, conceptual art for 50 years or so and it has become something of an orthodoxy. Maybe the embrace of ceramics reflects an urge to put the ‘visual’ back in visual arts—one can only hope.”

Katleman continues to push boundaries and explore new territory. She is recently turning to literary sources such as Shakespearean tragedy and Greek mythology for fresh inspiration (or “good fodder” as the artist describes it). The future is looking bright for Katleman and her studio. Over the past year she has been hard at work on a number of private and institutional commissions including a new piece for the Nelson Atkins Museum to commemorate the 50th anniversary of the National Council on Education for the Ceramic Arts (NCECA) Conference in March 2016 in Kansas City, Missouri. She is also collaborating with a commercial enterprise on a wallpaper design—what seems like a natural extension of her cinematic ceramic landscapes.

In retrospect, Katleman chalks up Folly’s success to her own personal mantra: Life makes you a better artist. She believes that her artistic breakthrough occurred due to a self-imposed hiatus following the birth of her twins. The time away from a daily studio regimen allowed her to distill and clarify her singular vision.

Her featured spread in Harper’s Bazaar in September 2015 reinforced her position as an artist who has successfully blurred the boundaries between the various branches of visual art, and between fine art and commercial art and design. It remains to be seen where Katleman will take her miniature theater next and to what extent she intends to “mess with people’s heads,” albeit daintily.

The author Lilianne Milgrom is a multi-media artist and writer on the arts. To learn more, visit her website, www.liliannemilgrom.com.