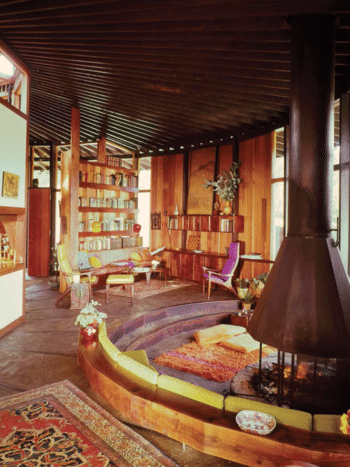 In 1966 Life did a story on the circular house woodworker Arthur Espenet Carpenter designed for himself in Bolinas, California. It was filled with his own innovative pieces. 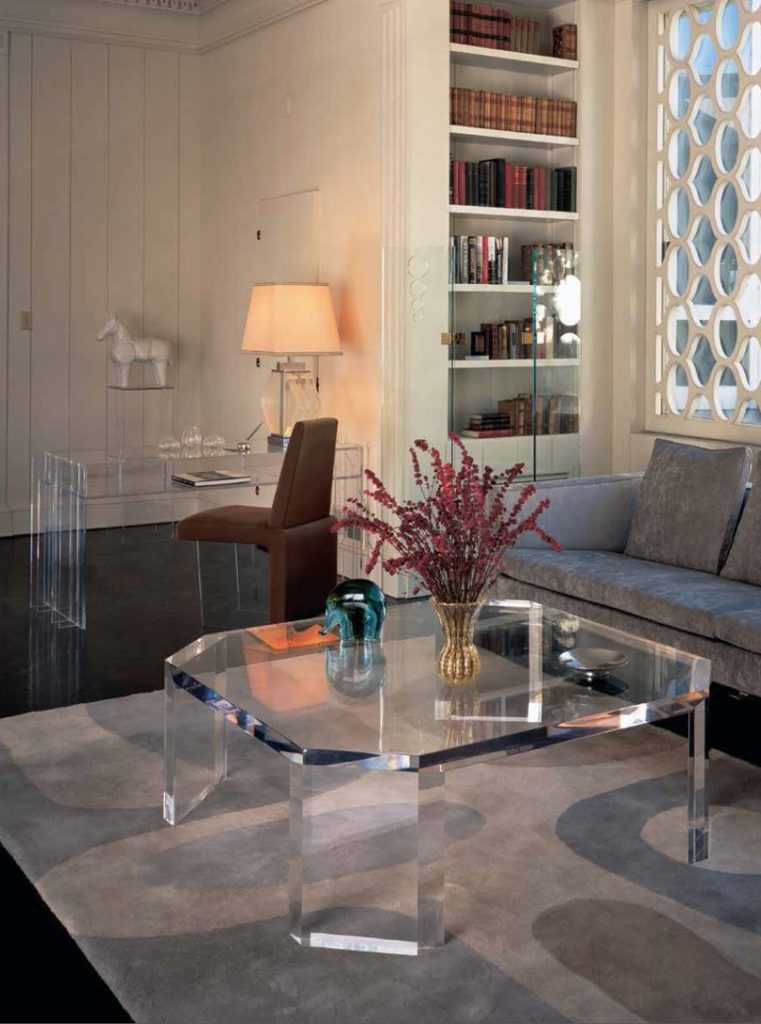 Acrylic furniture of the 1960s and ‘70s by Charles Hollis Jones in the Los Angeles home of actress Loretta Young. 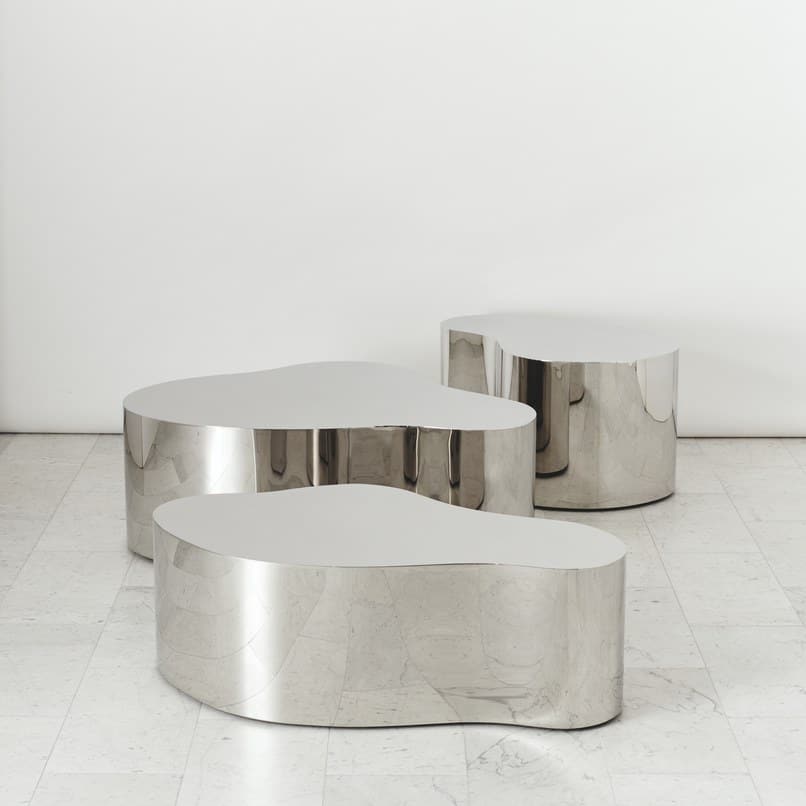 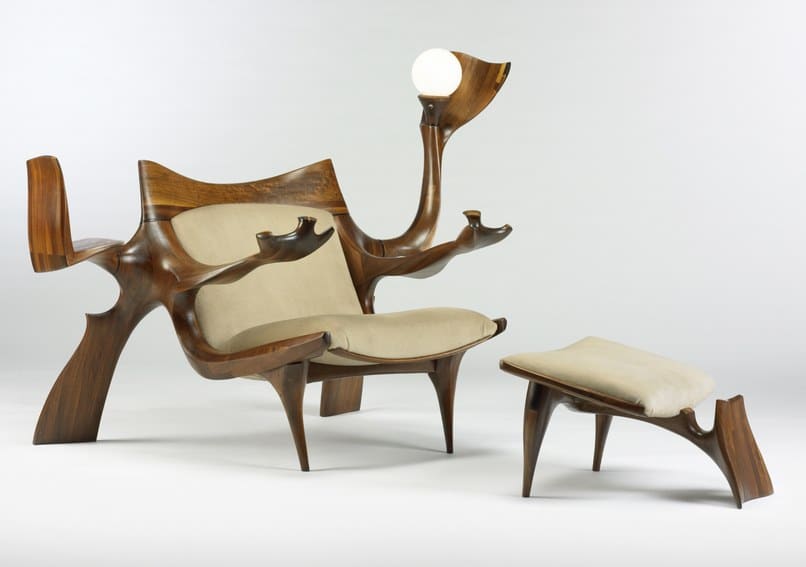 Jack Rogers Hopkins crafted this full-on “reading environment” complete with lamp, bookshelf, and ottoman for a client in San Diego. 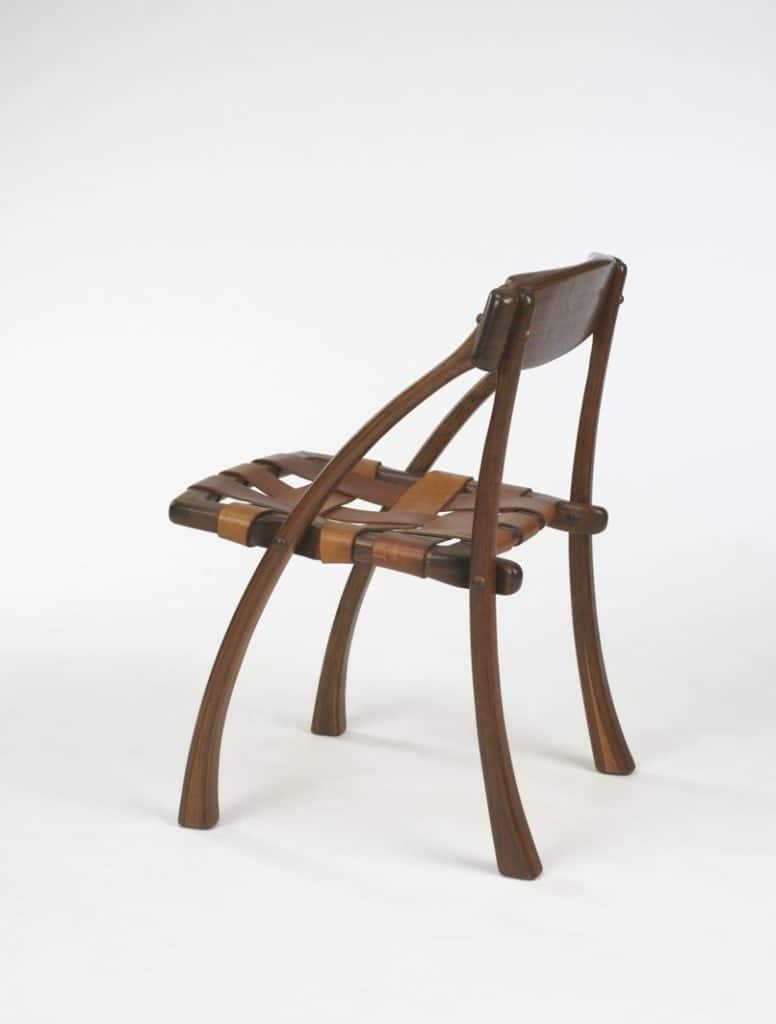 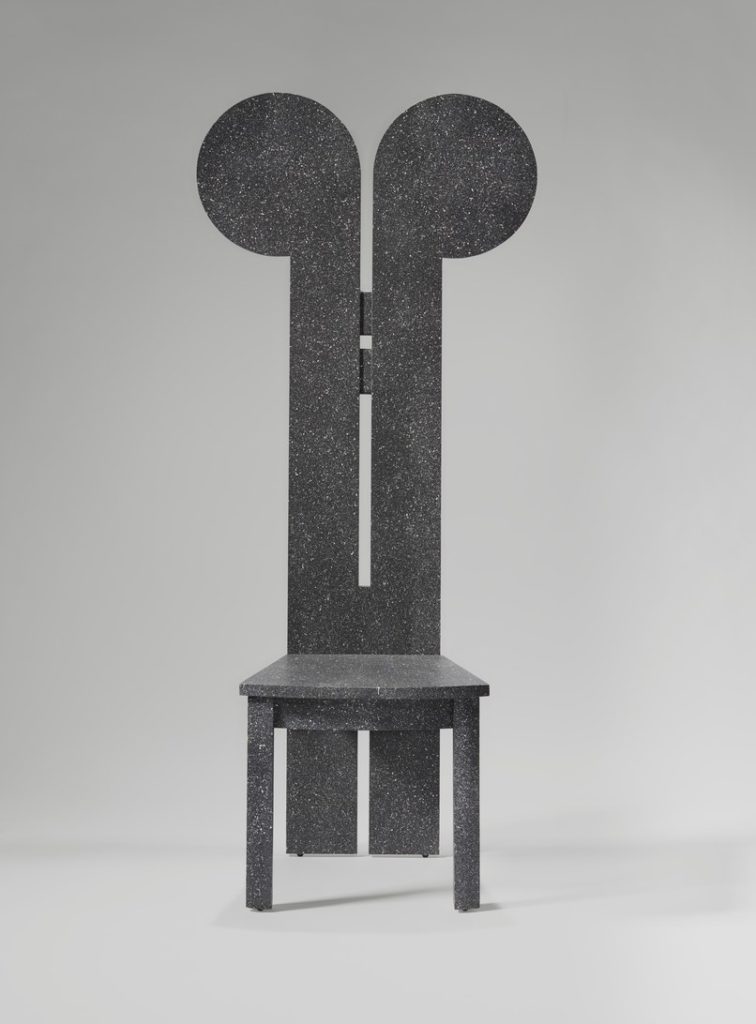 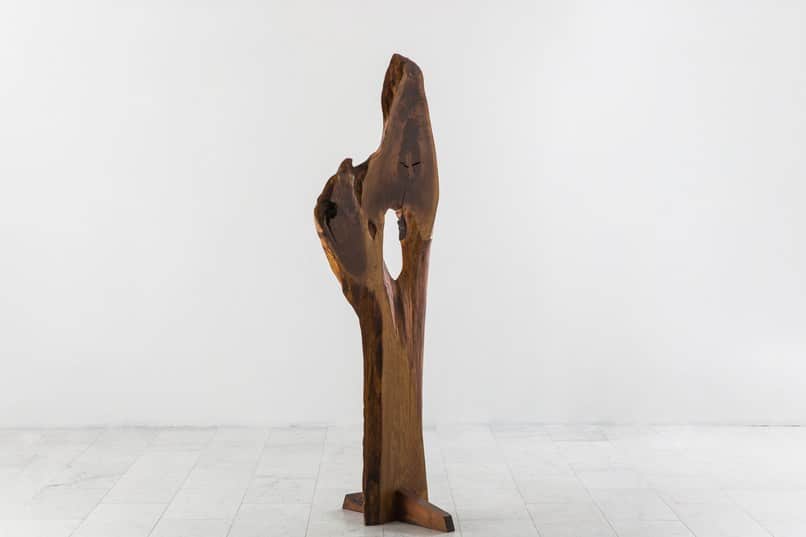 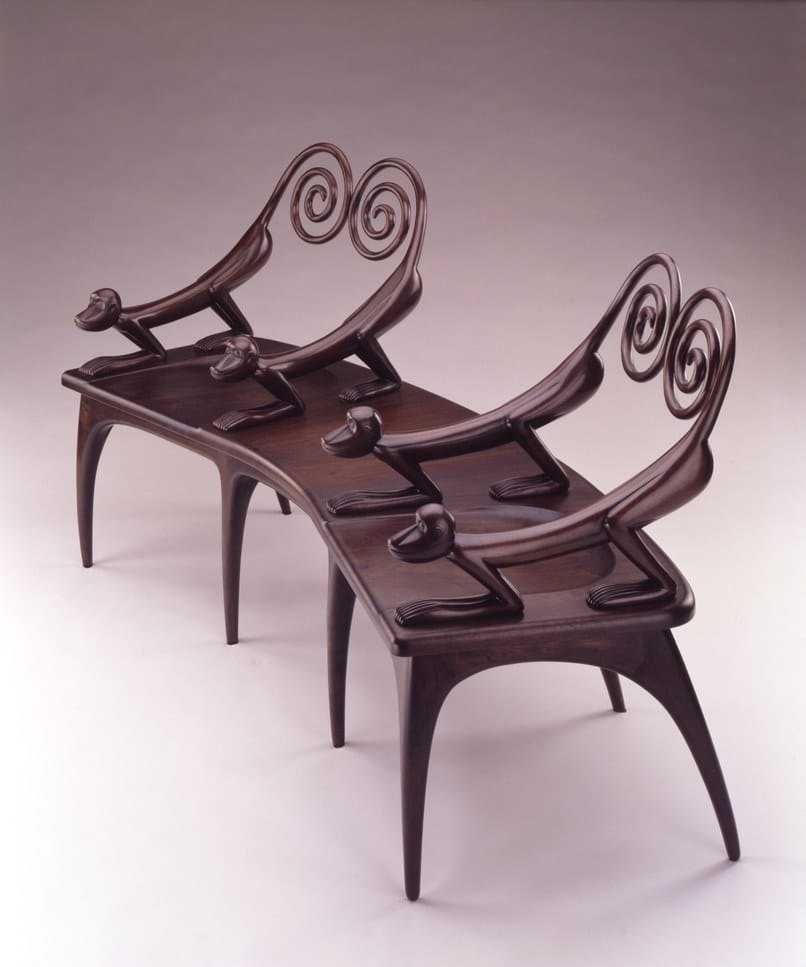 Judy Kensley McKie’s Monkey Settee of 1995 is now in the permanent collection of the Smithsonian’s Renwick Gallery.

Some design dealers just have a knack for knowing exactly what’s next. New York gallerist Todd Merrill grew up in his family’s Vermont auction house before making his way to New York City, where he set up a small, groovy furniture shop in 2000.
That gallery grew over time—as did the market for 20th-century design. A decade ago, Merrill published the influential volume, Modern Americana: Studio Furniture from High Craft to High Glam, the expanded edition of which is now being published by Rizzoli. The original book raised the profiles of American furniture makers like George Nakashima and Paul Evans. Collectors in Paris—“the only place where the husbands were leading their wives,” says Merrill with a laugh—developed a taste for Evans in particular, though the rest of the world eventually came around.
Given the soaring prices for American design today, it’s hard to believe Merrill could once get gallery-worthy castoffs from Park Avenue custodians who had simply rescued them from the trash. “The auction houses wouldn’t take them,” Merrill marvels. “A lot of things also went to Goodwill.” When he did not know exactly what he was holding, historical research took him on an “extremely thrilling” journey of discovery. Often, his detective work became a deep scholarly dive to flesh out stories of once-celebrated makers who had somehow fallen into obscurity. And the research hasn’t stopped, which has led to this new edition ten years after the first.
In the process of shedding light on half-remembered names, the original edition also helped to open some cupboard doors and bring unknown works to market. The new volume expands the entry on Charles Hollis Jones, whom Merrill terms “the guy who really put Lucite into furniture before Vladimir Kagan” (and who sold to celebrity clients Diana Ross and Tennessee Williams). “He’s been hugely imitated,” Merrill notes.
There’s a whole chapter on disco-era designer Karl Springer, who left behind an enormous body of work when he died of complications from AIDS in 1991. AD had published Springer’s Gramercy Park townhouse in a January 1977 cover story, and he was arguably even more famous in November 1989, when the magazine featured his forty-fifth-floor Upper East Side apartment. In death, his star dimmed, and confusion swirled around his iconic leather-clad pieces, which were often unmarked. Some pieces were still being made by a successor when Merrill stepped in recently, to help relaunch authorized reproductions.
The dealer is keen to highlight distinctions between such studio pieces and the more mass-produced items like chairs by Charles and Ray Eames that were manufactured in enormous quantities by Herman Miller. “It’s very exciting every time you see something unique,” the dealer explains.
His gallery stocks the sculptural work of Californian Jack Rogers Hopkins, who made sinuous, otherworldly seating with laminated hardwood. Hopkins was “Zaha Hadid before she was Zaha,” Merrill says. “He was really pushing what you could do with a piece of wood.” Hopkins worked alone and produced relatively little.
Bay Area woodworker Arthur Espenet Carpenter, known professionally as Espenet, fits a similar mold because his pieces so frequently break the mold. Another maverick, Espinet eschewed straight lines in favor of curves, ultimately extending his attention to the construction of a remarkable circular Bolinas Beach house filled with his furniture. It was featured in Life magazine in 1966. “His level of artistry exceeded anything on the market at the time, and even now,” Merrill says.
In an eye-opening chapter, the new edition introduces more than a dozen women makers, many of whom remain underappreciated for their serious design chops, as well as their irreverence and humor. “The women coming into design infused it with a sense of whimsy,” Merrill says. In 1988, the work of Charles Rennie Mackintosh inspired Wendy Maruyama to concoct a regal maple chair spattered with Zolatone paint and crowned with cartoon mouse ears. The whiff of appropriation only egged her on. “Let’s get more people upset,” she said in 2013.
After growing up in a house full of Danish Modern furniture and studying painting at the Rhode Island School of Design, Judy Kensley McKie took up woodworking and carving, eventually deciding to pursue her own vision and create distinctively curvaceous, animal-inspired pieces. “When I’d look at a table and see its four legs, I’d think ‘Hmm, dog. Add a tail, add a head,” she once said. When three early pieces were included in a 1979 show at the American Craft Museum, her career was made. The attention “changed my life, overnight,” she recalled in 2004.
Even more obscure was Willa Kim, a Tony award–winning theatrical designer who died in 2016, at age 99. Turns out Merrill was already familiar with her work, though he didn’t know it. Her name never surfaced during his research into James Mont, the notorious New York decorator for gangsters and movie stars. But when Merrill interviewed her decades later, Kim admitted that she had sculpted designs for Mont’s studio for a year behind the scenes, then quietly covered her tracks. “I didn’t want to be associated with Mont because he was crazy,” she told Merrill. The book details an especially colorful episode during which her employer tried to bash her boyfriend with a large sculpture.

Mira Nakashima, who earned an architecture degree from Harvard, has continued the serious woodworking tradition of her famous father, George. In part, she was motivated by the enormous and tempting pile of spectacular wood slabs he left behind when he died in 1990. Today, she designs custom commissions that sell at prices her father surely never could have imagined when he first set up shop in New Hope, Pennsylvania.

The fresh information and under-the-radar designers in the expanded edition represent an exciting new chapter for Merrill—and for collectors hungry for interesting new work.