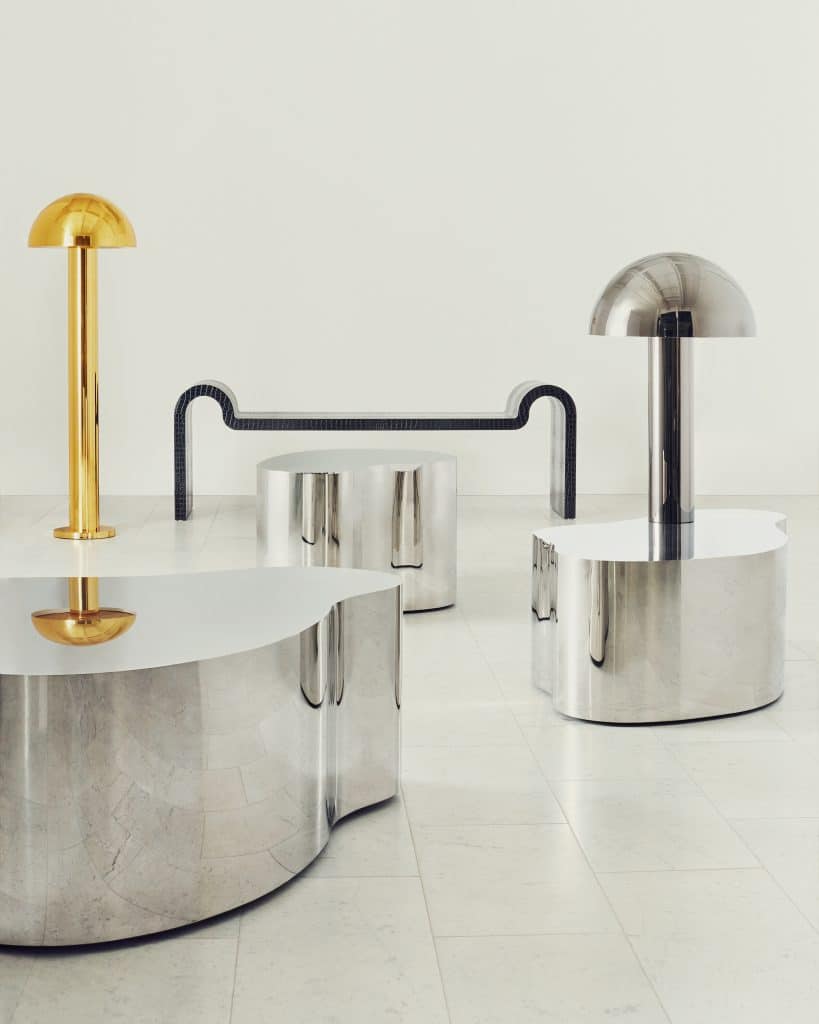 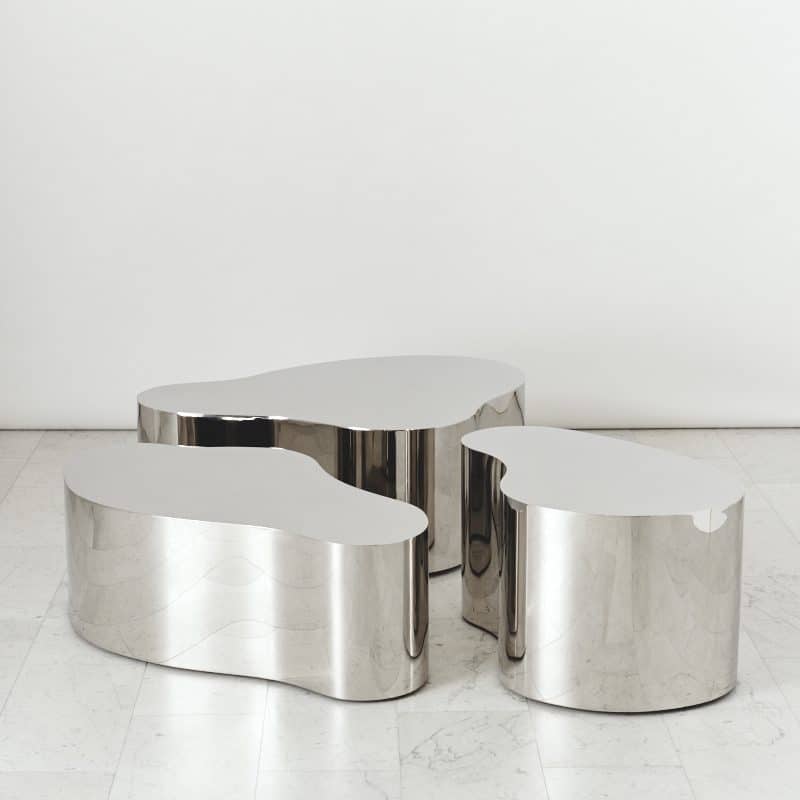 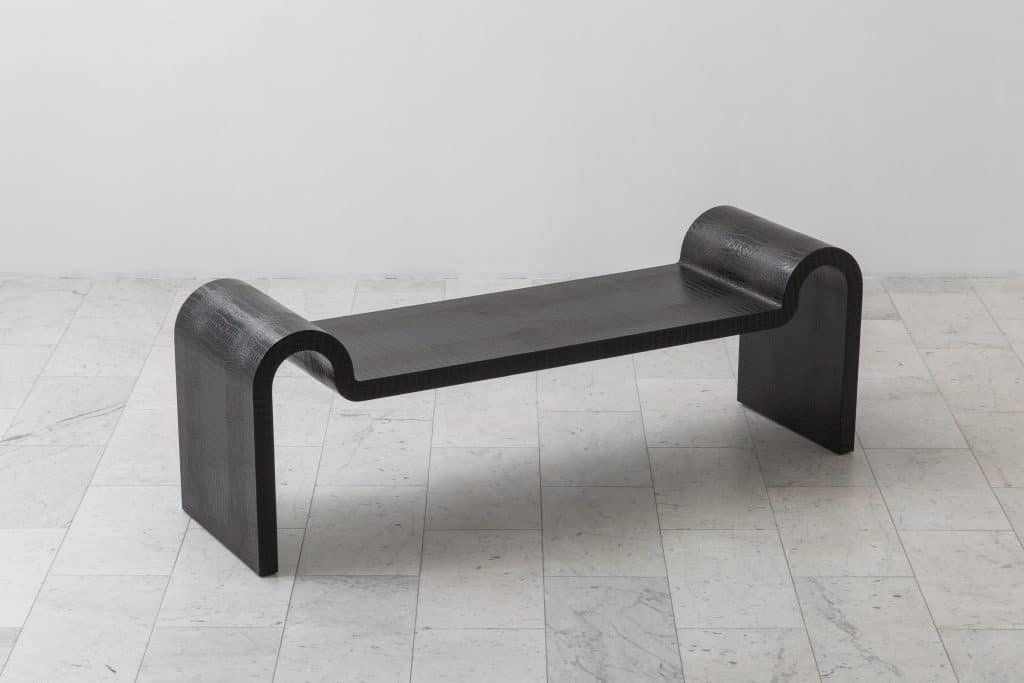 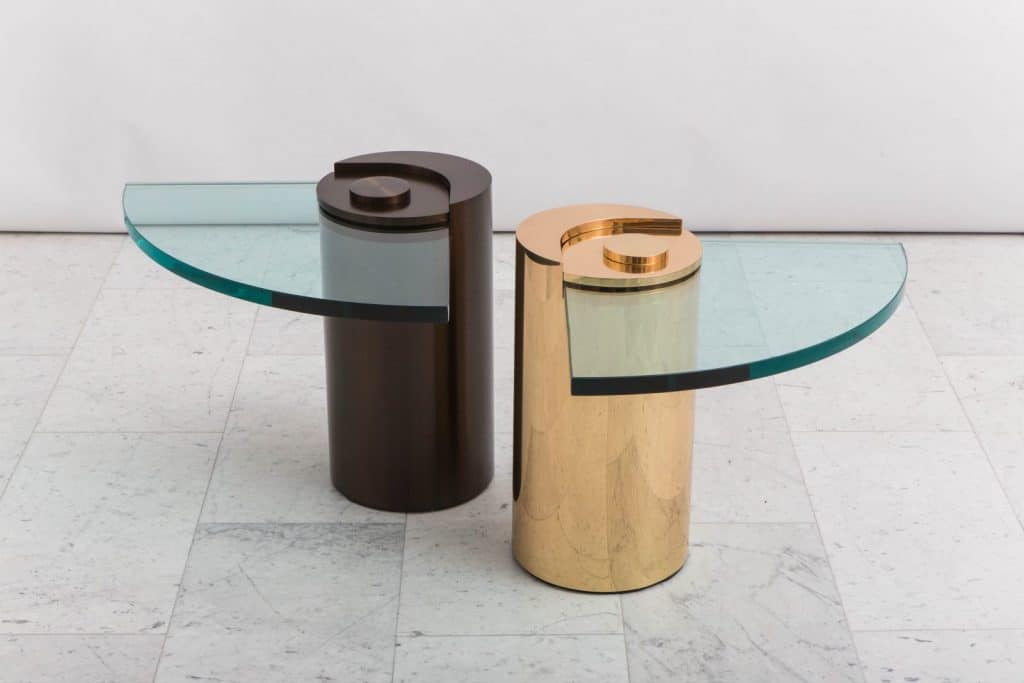 When the great interior designer Karl Springer was assembling his ravishing 45th-floor apartment on New York’s Upper East Side in the 1980s, the massive Deco-era ebony desk in his study wasn’t quite what it seemed.

“I made it for myself,” he confessed to Architectural Digest in 1989. “I was mad about the glass Deco original, but auction prices have gone crazy!”

Almost 30 years later, it is the same wild whims of the market that led dealer Todd Merrill and Mark Eckman, president of Karl Springer LTD (who worked with Springer for 30 years), to put several of Springer’s most covetable designs back into production.

“Springer had re-emerged in the secondary market in the early 2000s, and the prices were far outpacing the cost to reproduce them,” explains Merrill, who had been selling vintage Springer works since 2001. Case in point: A set of three of Springer’s iconic Free Form tables, realized in gleaming mirror-polished stainless steel, brought $50,000 at Wright Auctions in 2014.

At the same time, Eckman says, “I was looking for a way to jump back in and reach a higher level of clientele.”

So the two joined forces. Eckman—who has owned the Karl Springer trademark since 1994—pulled out Springer’s original models and called up many of the vetted craftspeople who had served Springer’s meticulous tastes (this is a man who had his closets lined in lacquered bird’s-eye maple!). Soon they were in business, reintroducing pieces from Springer’s collection bit by bit. Not surprisingly, they began with those coveted Free Form tables, which commanded such high prices at market but were exceedingly hard to find (says Eckman: “I don’t think I’ve seen more than five sets of the three in the last ten years”), and continued with pieces they felt would jibe with Springer’s contemporary fans: his groovy mushroom lamps, the sculptural leg table, and the sculpture bench.

“The pieces that attract me have detailing that you can contemplate for hours,” Springer said in that same Architectural Digest story. “Because I insist on the same standards, there could never be any mass production in my workshop—we make one piece at a time.”

And the same is true of the reproductions: Each piece is made to order for the client with top-notch attention to detail. “It’s a true continuation of Springer’s original production,” says Merrill.

“I only have one guy that can weld the Free Form top on right,” says Eckman, who works with six different artisans, all in the U.S. “If you look at the shape, even though it’s a flowing shape, it needs to be geometrically crisp. When people who don’t know what they’re doing it weld it, the polishing is uneven; you get distortions. It’s the ultimate test of a welder’s ability.”

The Sculpture Bench—a low seat often upholstered in exotic skins, with legs that rise up to form upside-down Js—is another feat of manufacturing. Luckily, Eckman still employs the same woodworker who made them for Springer.

“The shape defies gravity; in a way there’s nothing to hold it up,” Eckman says. “To make that bench that shape and ensure three heavyset people can sit on it without it breaking, you have to have a master craftsman.”

Merrill’s latest crazy commission? A 114-inch long sculpture bench (the standard is 72). They didn’t back down. Rather, they had the internal form fabricated in mild steel, making sure the outside was clean and straight so the leather artisan had no trouble with adhesion.

Next, they say, they will introduce a series of case goods—a six-drawer dresser, a console, and a salonier—clad in stainless steel, brass, and bronze. Notably absent from the mix is the piece that ushered Springer into the spotlight famously capturing the attention of the Duchess of Windsor: the cobra skin–swathed telephone table. Merrill’s reasoning for avoiding the icon: “It’s been knocked off for years, and the function today is not the same as it was 30 years ago.”

Alas, not every great design stands the test of time—and certainly not one dedicated to elegantly stowing a landline.