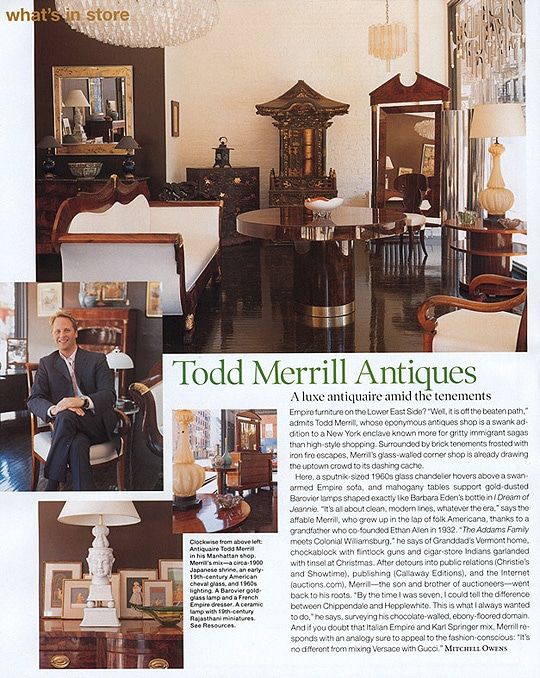 WHAT’S IN STORE
A LUXE ANTIQUAIRE AMID THE TENEMENTS

Empire furniture on the Lower East Side? “Well, it is off the beaten path.” admits Todd Merrill, whose eponymous antiques shop is a swank addition to a New York enclave known more for gritty immigrant sagas than high-style shopping. Surrounded by brick tenements frosted with iron fire escapes, Merri’s glass-walled corner shop is already drawing the uptown crowd to its dashing cache.

Here, a sputnik-sized 1960s glass chandelier hovers above a swan-armed Empire sofa, and mahogany tables support gold-dusted Barovier lamps shaped exactly like Barbara Eden’s bottle in I Dream of Jeannie. “It’s all about clean modern lines, whatever the era,” says the affable Merrill, who grew up in the lap of folk Americana, thanks to a grandfather who co-founded Ethan Allen in 1932. “The Addams Family meets Colonial Williamsburg,” he says of Granddad’s Vermont home, chockablock with flintlock guns and cigar-store Indians garlanded with tinsel at Christmas. After detours in public relations (Christie’s and Showtime), publishing (Cataway Editions), and the Internet (auctions.com), Merrill – the son and brother of auctioneers – went back to his roots. “By the time I was seven, I could tell the difference between Chippendale and Hepplewhite. This is what I always wanted to do,” he says, surveying his chocolate-walled, ebony-floored domain. And if you doubt that Italian Empire and Karl Springer mix, Merrill resounds with an analogy sure to appeal to the fashion-conscious: “It’s no different from mixing Versace with Gucci.”