Art & AntiquesOne Piece at a TimeMarch 2014 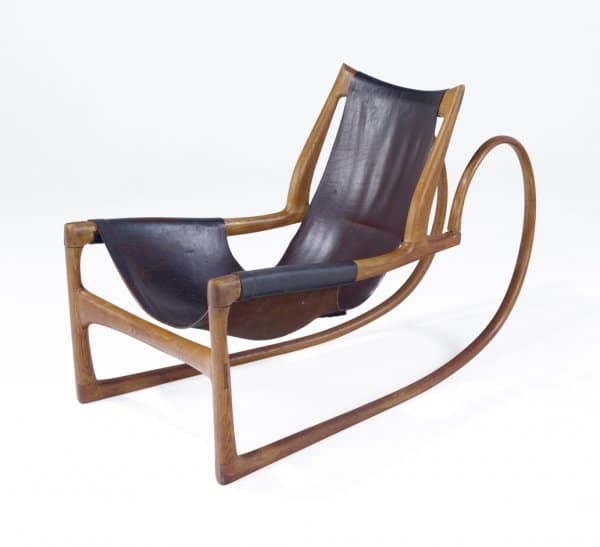 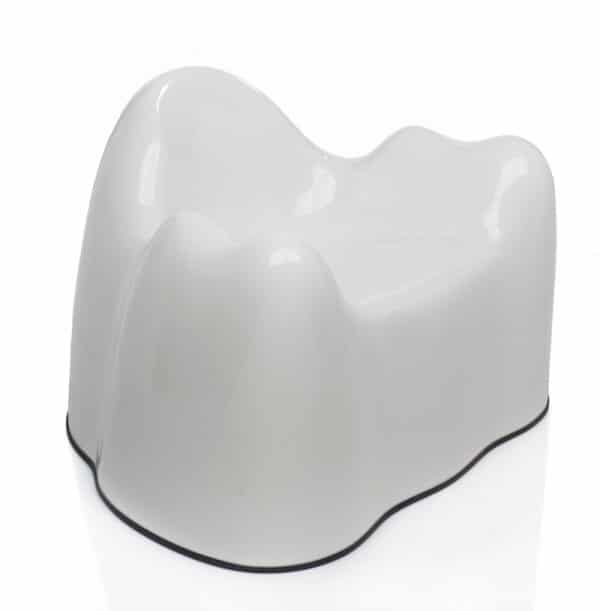 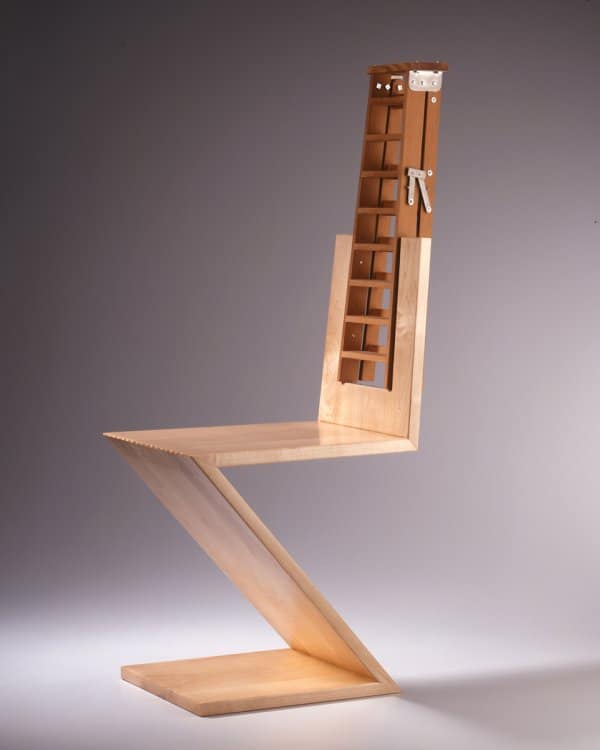 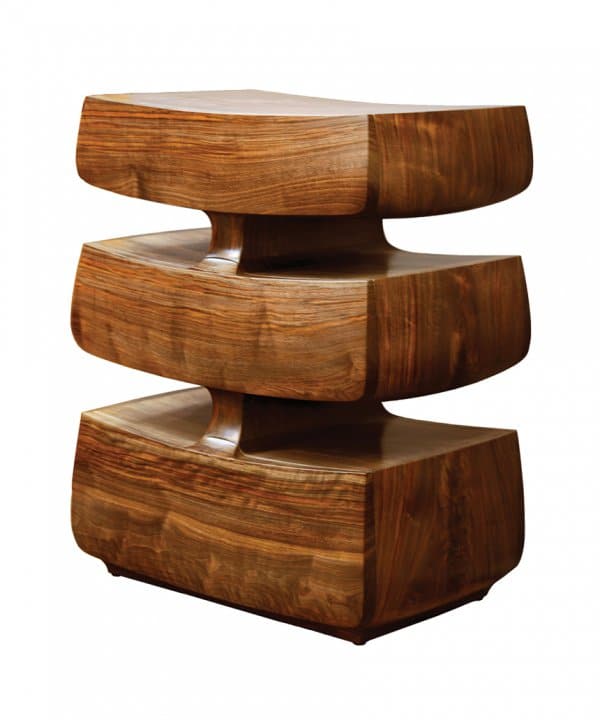 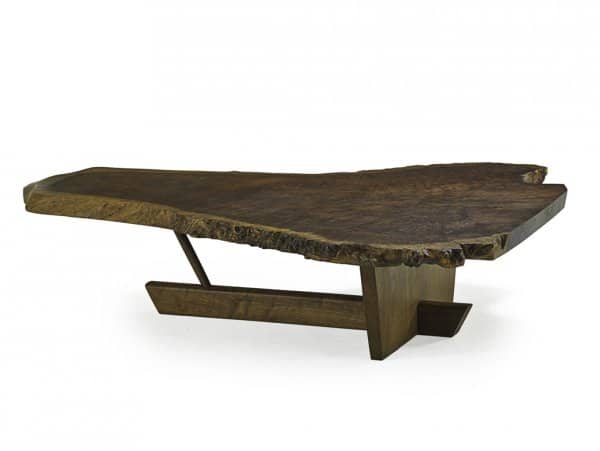 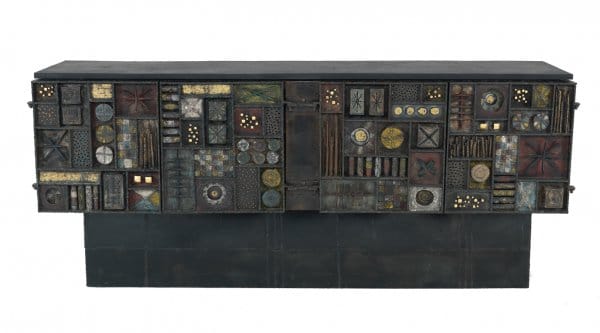 ONE PIECE AT A TIME

The craftsmen of the studio furniture movement have always been American originals, working independently of each other, following their own visions, making everything by hand.

The pioneers taught themselves because they had to; no school offered classes in what they wanted to do. Wharton Esherick, active from the early to mid-20th century in Pennsylvania, was retroactively deemed the first of his kind, and he started out as a sculptor, only later applying his skills and his mindset to the making of furniture that was more than just things that equipped a house. After World War II Esherick was followed, but only in the chronological sense, by George Nakashima, who transformed rugged, almost raw-looking slabs of wood into magnificent coffee tables and benches out in New Hope, Pa.; Sam Maloof, who raised rocking chairs to an art form in his Alta Loma, Calif., workshop; and Arthur Espenet Carpenter, a New York-born Californian who imparted a sleek, graceful style to chairs, desks, and music stands.

Finding their way to the same craft roughly around the same time were Wendell Castle, a Kansan who created sculptural furniture in wood and fiberglass; Garry Knox Bennett of Oakland, Calif., who injected a wry wit into pieces such as a ladderback chair that had an actual ladder for a back; and Evert Sodergren, who itched to build something different than the traditional wares of his father, who emigrated to Seattle from Sweden when Evert was three. They were fortunate to flourish when they did. The 1960s changed everything, up to and including the market for high-end furniture. “People were looking for things that were outside the traditional—they wanted to see something different,” says Todd Merrill, who runs an eponymous gallery in New York.

Having hit upon the same artistic solution—furniture-making with an aesthetic flair—in isolation, these men remained alone. Even when they became aware of each other’s existence, they stayed largely in their own orbits. And while some have or have had small crews of assistants, their shop payrolls are modestly sized. Only in the 1990s, after Esherick and Nakashima had died, did their type of work receive a name: studio furniture. Sometimes it’s elongated to “American studio furniture,” or “the studio furniture movement,” or a similar-sounding term, but the phrase captures the basic philosophical and technical principle that unites these artists. All are American, and all have a deep, abiding respect for the beauty and power of wood, even if some of them don’t always place that material at center stage. Many prefer not to be called artists, either because they find the term too highfalutin or because they want to draw boundaries between their decorative-art work and their fine-arts work. But every single one makes his furniture pieces one at a time, by hand—no factory-style mass production allowed, ever.

Lately, studio furniture is gaining a higher profile. Last October saw the debut of the Modernism Museum Mount Dora in Mount Dora, Fla., the first institution to devote itself to the American studio furniture movement. Its inaugural exhibit, Wharton to Wendell, explores the contributions of Esherick and Castle, who was forever changed by a spontaneous 1958 visit to Esherick’s studio in rural Paoli, Pa. That show continues through September, and exhibitions on Nakashima, Maloof, Carpenter, and others are to come. In addition, the Michener Museum in Doylestown, Pa., is spotlighting another studio furniture stalwart in “Paul Evans: Crossing Boundaries and Crafting Modernism,” which runs through June 1.

In the studio furniture world, George Nakashima decisively outranks everyone else and dominates the secondary markets. Even if you’ve never heard of studio furniture or the other artists who fit under its widely-spanning umbrella, you probably have heard of Nakashima or seen his pieces. The reasons why he reigns are many. First and foremost, he was supernaturally prolific. Bob Aibel, founder of the 29-year-old Moderne Gallery in Philadelphia, says that he and Mira, Nakashima’s daughter, together arrived at a lifetime production estimate of 35,000 for the Japanese-American master, who was born in 1905 and died in 1990. Compare this to David Ebner, an excellent Long Island, N.Y., artist who was born in 1945 and embarked on his career in the 1960s. He draws influences from Nakashima, Maloof, Esherick, Carpenter, and Castle and synthesizes them into his own distinctive vision. Exquisite as it is, Ebner’s output currently tops out at around 1,400 pieces, a number that’s far more typical for a studio furniture artist. Aibel is spotlighting Ebner with a one-man show at the Moderne Gallery right now, through June 30.

“George was more prolific than all of the others, hence he was able to feed a market that was hungry for his work,” says Aibel, whose gallery specializes in Nakashima, Ebner, Esherick, Castle, and other studio furniture artists. It should be noted that Nakashima maintained a crew of 10 to 12 shop hands under his close supervision, while Ebner rarely employed more than two, but the point stands—Nakashima just plain made more stuff than anyone else, and his stuff was consistently good. “It’s hard to replicate George Nakashima for quality and quantity. He defined the aesthetic, he made a ton of furniture, and he lived a long time,” says David Rago, founding partner of Rago Arts, a Lambertville, N.J., auction house that often handles studio furniture, adding that studio furniture artists who achieve sufficient volume enable their own market momentum: “You can’t do a house in Phil Powell furniture. You can’t do it. You’ll wait forever. But you can with George Nakashima.”

Moreover, Nakashima’s furnishings harmonize with virtually every interior design style imaginable and fits seamlessly into so-called “eclectic” settings, too. “I see it in contemporary interiors, in craft interiors, in Japanese interiors, in ultra-contemporary interiors with glass and steel, and country interiors. Not many other works [of studio furniture] are as adaptable,” Aibel says. Merrill contributes another key observation about Nakashima: “There was always a continuous audience because his daughter [Mira] carried on after him. There was never a lack of recognition of his work. His studio never closed,” Merrill says. “He never fell off the radar.” In contrast, Nakashima’s New Hope neighbor, Paul Evans, fell into obscurity after he died in 1987 and his workshop shuttered, even though he enjoyed considerable fame in the 1970s and ’80s.

In truth, it was a production schedule quirk that granted Mira Nakashima the opportunity to keep her father’s studio open. “There was always a lag—it could have been a year or a year and a half between ordering and delivering,” says Rago, explaining that there was a significant backlog in the pipeline when the artist died. Mira, who was born in 1942, had toiled alongside her father since 1970, translating his sketches into technical drawings that his shop assistants relied upon when fabricating each piece, an experience which suited her for the task of completing the partially finished orders on the ledger. “Mira has said several times that without that work, the studio could not have gone on,” Rago says. “It allowed her to carry over until she could establish herself as an artist of the highest order.”

Today, Mira continues to lead Nakashima’s studio, creating works under her own name that Aibel and Rago handle proudly. But, as Aibel notes, “all are informed by the approach that George took.” Past Rago sales also illustrate how the market imposes a hierarchy on Nakashima pieces. The house record for a George Nakashima belongs to a 1981 Minguren I coffee table that came with its original drawing (such paperwork is critical for establishing authenticity, as Nakashima didn’t routinely sign his works until later in his life) and fetched $288,000 in April 2007 against an estimate of $80,00–120,000. A Minguren II coffee table that was begun by George in 1989 and finished by Mira in 1991 commanded $59,375 last October, exceeding its $25,000–35,000 estimate. A Minguren I dining table solely made by Mira in 2000 and offered at Rago in March 2013 sold for $23,750, almost inching past its $18,000–24,000 estimate.

Most studio furniture artists share the Nakashima work ethic, if not the yield. Evert Sodergren, whose sculptured chair earned a place in the holdings of the Smithsonian and who was dubbed a “Living Treasure” of the Northwest, conceded to retirement at 92 after it became unavoidably clear that his deteriorating health wouldn’t allow him to properly oversee his woodworking shop, which was full of dust and oil, as it had to be. And that fact only became unavoidably clear to him when constantly going upstairs to his living area to use an oxygen mask, then removing it and taking an elevator downstairs to his in-home workshop, issuing orders to his apprentices, and then heading back upstairs for more oxygen started to wear on him. He died last June, at age 93. Garry Knox Bennett is getting on in years and he doesn’t like it one bit. He still works seven days a week, but can only put in eight hours a day, much to his annoyance. “I’m 79 years old and I’m slowing down, unfortunately, and damn it, I hate it,” he says. “The scale of the work has gotten smaller—it has to.” Sizing down is as much for economic sense as anything; Bennett lives on the West Coast, but his client base is on the East Coast, and smaller pieces are cheaper for him to ship. He primarily works alone, so sure in his abilities that he works without a paper draft to guide him. “I don’t draw these things out. I work from sketches in my head, which allows me to change as I go,” he says, likening himself to a chef who cooks without needing to check a written recipe. “When you make a meal without following a recipe, maybe it’s not so good, or it’s really good. But the furniture,” he says brightly, “is always good.”

The first wave of studio furniture artists were not teachers, and were often too busy fulfilling orders to formally impart their wisdom to neophytes; George didn’t teach Mira his ways so much as engage her in endless games of guess-what-the-genius-wants and berate her when she guessed wrong. Subsequent generations of studio furniture artists had the option of teaching at art schools and colleges, and some of them took advantage of it. Still, we have yet to see a fresh studio furniture talent emerge who once took classes with Wendell Castle, or who apprenticed in the shop of Sodergren (between 50 to 70 trainees learned from him in this manner over the decades; he also taught at the University of Washington). The trio of craftsmen who helm the workshop of Maloof, who died in 2009 at age 93, carry forward in his style. So, too, does Mira Nakashima further the aesthetic laid down by her father.

Maybe the next great American studio furniture talents will have to emerge the same way that the others did—finding their way to the craft independently, quilting their educations together from hours in shop class or at a family workbench, hanging out with fine artists, and taking an art school class here and there. But the ethos that guided the earliest proponents of studio furniture will guide their heirs: making everything to the highest standard by hand, one piece at a time.

Art & AntiquesOne Piece at a TimeMarch 2014