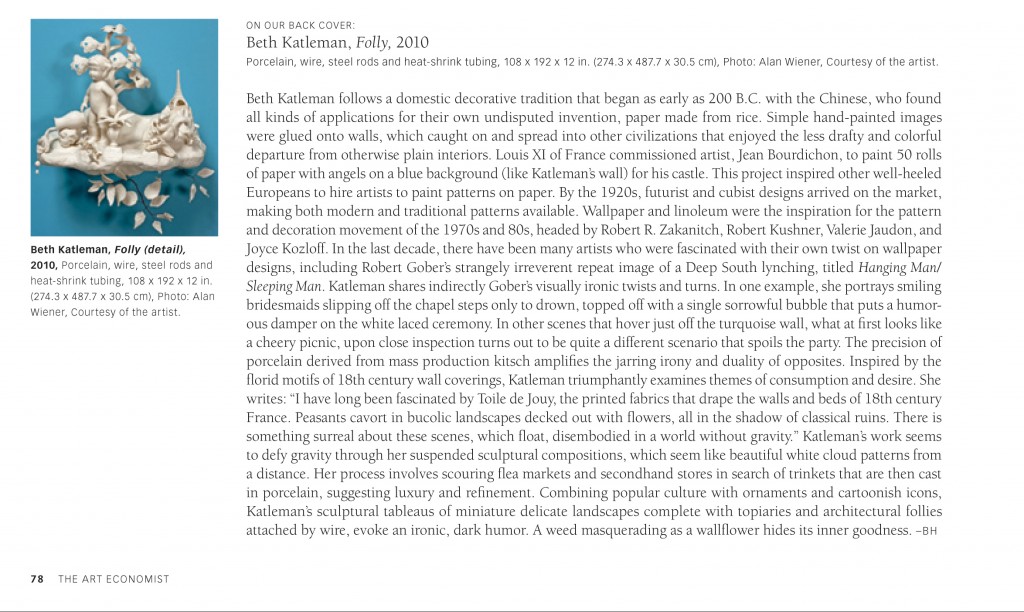 “Beth Katleman follows a domestic decorative tradition that began as early as 200 BC with the Chinese, who found all kinds of applications for their own undisputed invention, paper made from rice. Simple hand-painted images were glued onto walls, which caught on and spread into other civilizations that enjoyed the drafty and colorful departure from otherwise plain interiors. Louis XI of France commissioned the artist Jean Bourdichon to pain 50 rolls of paper with angels on a blue background (like Katleman’s wall) for his castle. This project inspired other well-heeled Europeans to hire artists to paint patterns on paper. By the 1920s, futurist and cubist designs arrived on the market, making both modern and traditional designs available. Wallpaper and linoleum were the inspiration for the pattern and decoration movement of the 1970s and 80s, headed by Robert B. Zakanitch, Robert Kushner, Valerie Jaudon and Joyce Kozloff. In the last decade, there have been many artists who were fascinated with their own twist on wallpaper designs, including Robert Gober’s strangely irreverent repeat image of a Deep South lynching, titled Hanging Man/Sleeping Man.

Katleman shares indirectly Gober’s visually ironic twists and turns. In one example, she portrays smiling bridesmaids slipping off the chapel steps only to drown, topped off with a single sorrowful bubble that puts a humorous damper on the white laced ceremony. In other scenes that hover just off the turquoise wall, what at first looks like a cheery picnic, upon close inspection turns out to be quite a different scenario that spoils the party. The precision of porcelain derived from mass-production kitsch amplifies the jarring irony and duality of opposites. Inspired by the florid motifs of 18th century wall coverings, Katleman triumphantly examines themes of consumption and desire. She writes: “I have long been fascinated by Toile de Jouy, the printed fabrics that draped the walls and beds of 18th Century France. Peasants cavort in bucolic landscapes decked out with flowers, all in the shadow of classical ruins. There is something surreal about these scenes which float, disembodied, in a world without gravity.”

Katleman’s work seems to defy gravity through her suspended sculptural compositions, which seem like beautiful white cloud patterns from a distance. Her process involves scouring flea markets and second hand stores in search of trinkets that are then cast in porcelain, suggesting luxury and refinement. Combining popular culture with ornaments and cartoonish icons, Katleman’s sculptural tableaus of miniature delicate landscapes complete with topiaries and architectural follies attached by wire, evoke an ironic, dark humor. A weed masquerading as a wallflower hides its inner goodness.