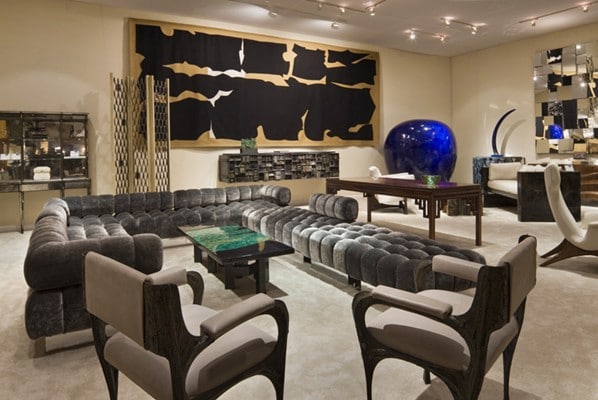 Many dealers reported outstanding sales results. “We had the best fair in the 14 years that we have been participating in Palm Beach,” said arms and armor dealer Peter Finer of London.

Italian goldsmith and jeweler Buccellati echoed these sentiments: “This was also the best year in our long fair participation as well.”

In reporting multiple important sales, Jonathan Green of Richard Green commented “We were very pleased with our Palm Beach results this year.”

“The US economy, the general mood of the attendees and our sales has clearly improved this year,” said Michael James of The Silver Fund. “All the right people were here this year”. One day we were processing three black American Express cards at the same time!”

Howard Brassner of Brassner Fine Art quipped “This is the first year our gallery participated in AIFAF – now I know why they call it the big Palm Beach show!”

Among the substantial sales at the Fair:

Waterhouse & Dodd sold a Renoir watercolor for $100,000 and an oil painting by French painter Albert Gleizes for approximately $1M in addition to six other works.

Brassner Fine Art sold a Botero for $190,000 as well as a Childe Hassam for approximately $1M.

Reubin Simantov had a successful first year at the fair, reporting multiple sales from a pair of $3,800 cuff links to a $78,000 necklace. “I cannot tell you exact numbers of sales from the Fair – it’s immeasurable. Today alone we’ve had approximately ten clients who’ve decided to come back and make a purchase!”

Isaac Levy of Yvel achieved seven figure sales. “I am extremely happy and proud to be part of this extraordinary fair. It offers the opportunity to reach many of my long-time clients and friends in a luxurious environment. We were also pleased with the many wonderful new relationships and sales that developed during the fair.”

The Silver Fund reported sales throughout the fair to old and new clients. “This was by far our most successful fair in recent years,” said owner Michael James.

Organizers David and Lee Ann Lester announced that the theme of the fair in 2012 will be “Paris – Palm Beach” which will feature French galleries, artwork, jewelry, food, and wines. The fair’s well received lecture series will be broadened in 2012. AIFAF’s invitational program for visiting museum groups will also be expanded to including more institutions, curators, and collector groups from throughout the United States. Ancillary social events including evening activities hosted by dealers – first introduced in 2009 – will return to the 2012 schedule.