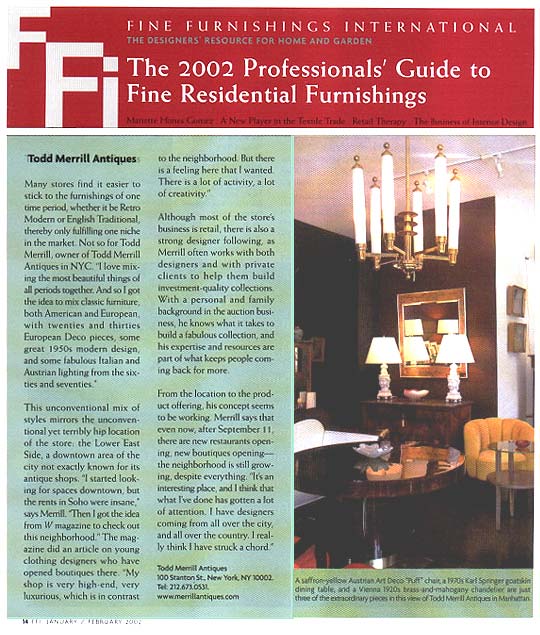 Many stores find it easier to stick to the furnishings of one time period, whether it be Retro Modern or English Traditional, thereby only fulfilling one niche in the market. Not so for Todd Merrill, owner of Todd Merrill Antiques in NYC. “I love mixing the most beautiful things of all periods together. And so I got the idea to mix classic furniture, both American and European with twenties and thirtoes European Deco pieces, some great 1950s modern design, and some fabulous Italian and Austrian lighting from the sixties and seventies.”

This unconventional mix of styles mirrors the unconventional yet terribly hip location of the store: the Lower East Side, a downtown area of the city not exactly known for its antique shops. “I started looking for spaces downtown but rents in SoHo were insane,” says Merrill. “Then I got the idea from W magazine to check out this neighborhood.” The magazine did an article on young clothing designers who have opened boutiques there. “My shop is very high-end, very luxurious which is in contrast to the neighborhood. But there is a feeling here that I wanted. There is a lot of activity, a lot of creativity.”

Although most of the store’s business is retail, there is also a strong designer following, as Merrill often works with both designers and with private clients to help them build investment-quality collections. With a personal and family background in the auction business, he knows what it takes to build a fabulous collection, and his expertise and resources are part of what keeps people coming back for more.

From the location to the product offering, his concept seems to be working. Merrill says that even now, after September 11, there are new restaurants opening, new boutiques opening – the neighborhood is still growing, despite everything. “It’s an interesting place, and I think that what I’ve done has gotten a lot of attention. I have designers coming from all over the city, and all over the country. I really think I have struck a chord.”