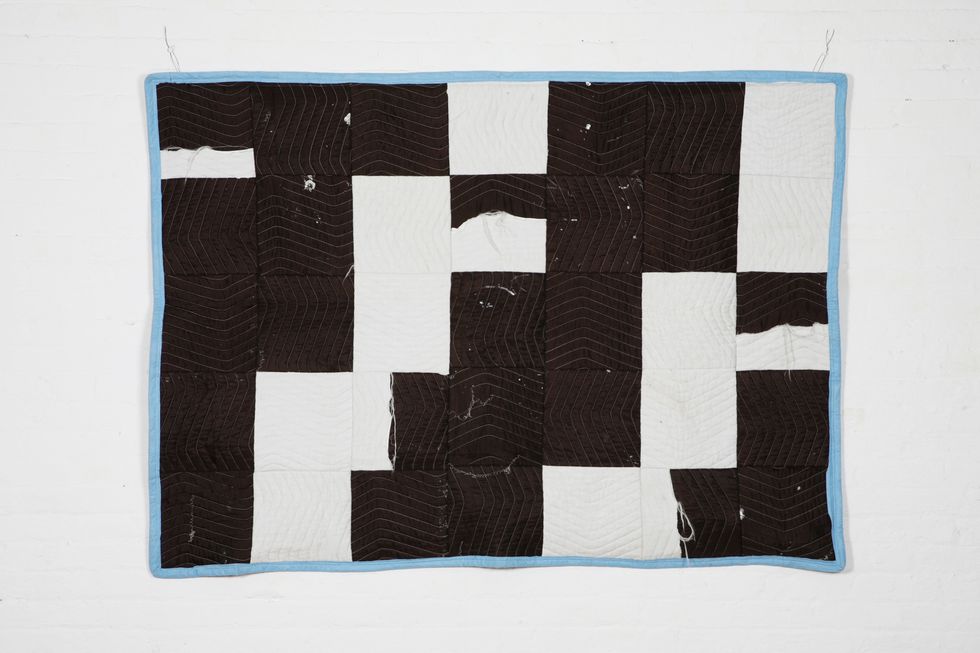 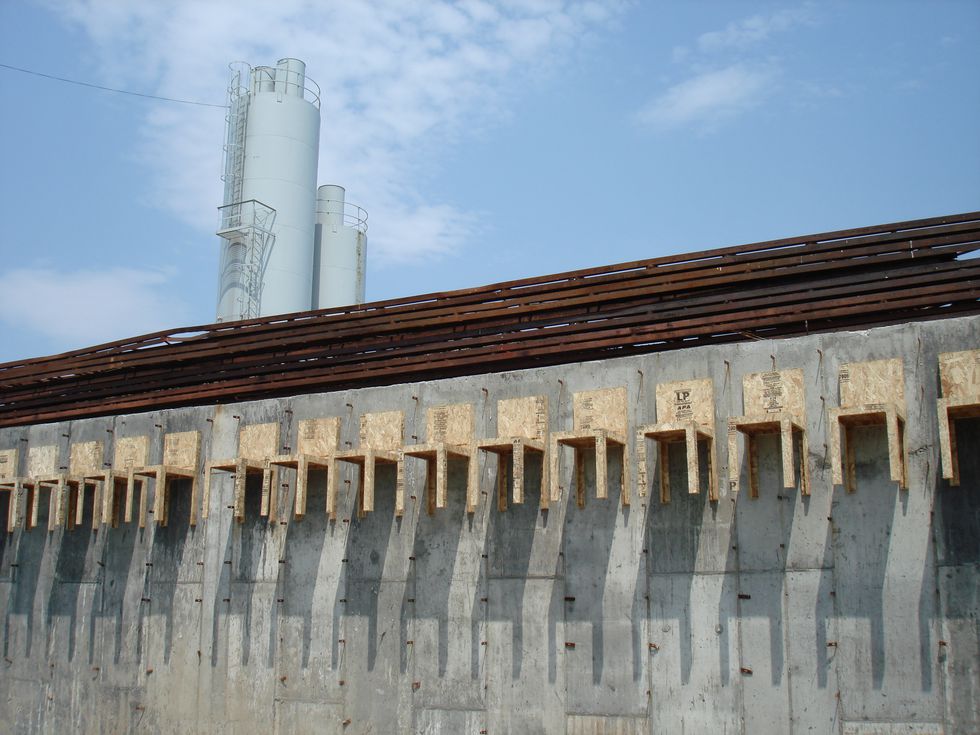 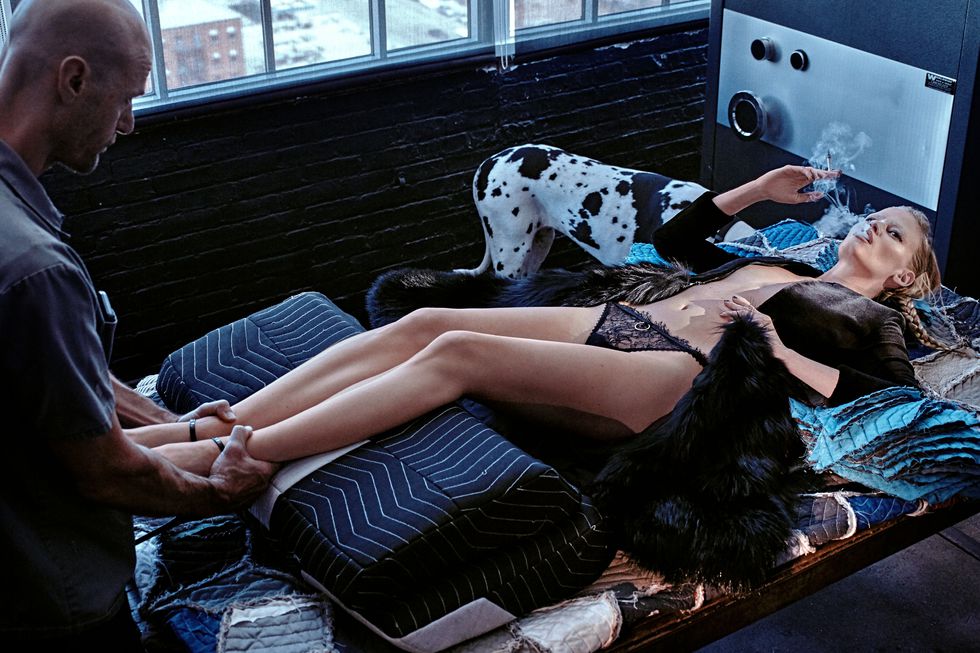 Steve Klein’s Man Behind the Scenes, Artist Chris Rucker Goes in Front of the Camera

The Furniture Maker, Design Builder, and Fine Artist Gives CR a Peek into his Creative Process

For those that create, material is everything. The fashion designer Stella McCartney, for instance, uses yeast-made silk, which is emblematic of her eco-conscious fashion brand, whereas multi-hyphenate Virgil Abloh built his brand Off-White via fabrics like workwear denim and architectural objects that subvert archetypal ways of dressing. Having spent a lifetime of creating, Chris Rucker not only finds inspiration from his ingredients—largely recycled construction materials—he is enlivened by them. Strand board, a cheap sheathing material made of wood chips, is his most favorite medium and comprises Rucker’s minimalist furniture, while moving blankets and “safety blue” enamel fill out his hanging works. Together, these create a disruptive aesthetic that questions disposability and function. He studied sculpture at the University of Connecticut in Storrs (where he also grew up), before taking up trade work as a means to pay rent. Plumbing, electrical, and plaster work filled the young artist’s days in New York City—where he commuted from worksite to workshop—and would eventually shape his artistic practice. “I made what I knew,” Rucker recalls. He first met Steven Klein in 1999 when he was contracted to repair the photographer’s studio. The two quickly hit it off, and after several structural projects—including a large-scale renovation of Klein’s Bridgehampton compound—the young Rucker joined his creative sect, working with the likes of designer Gideon Ponte on Klein’s filmic provocation. Here—beside images of himself, Lara Stone, and his own creations photographed by Klein from CR Fashion Book Issue 11—the furniture-maker-slash-design-builder-slash-fine-artist gives CR a peek into his creative process and explains the difference between his many different day jobs.

Your furniture and art pieces reflect your history in construction. What are the different mentalities in working outside of the studio versus inside it?

“I’ve always kept a pretty clear distinction between my trade and my creative work, but at a certain point in my career I came to realize that I needed to combine the practice—or the material at least—to make what I wanted. With that, I had to accept who I was and any concerns that went along with it. I had to stop thinking ‘Oh, if I use construction material, people are going to know that I’m from a construction background.’ I dropped that worry and made the work the focus. When I was making furniture, I knew it was furniture. When I was making artwork, I knew it was artwork.”

This relationship between construction and art is reflected in your source materials which jump between both worlds: yellowish flanks of cheap wood, furniture pads, and paint enamel. What do these items mean to you?

“I’m not the kind of person who goes to Harry Zarin to buy fabric; I’m more about using what I already have around me. Strand board is the lowest of low. It’s not for ‘fine’ furniture. It’s 12 dollars a sheet, and you can get it at any construction site. My quilting and textile work is almost entirely comprised of moving blankets that I’ve used to wrap furniture on job sites. I’ve had them for ten years. I like the idea of low materials—something that can be used a base but that can be given value through process. You often see work that is material driven on the high side of art, but it becomes boring. I like the sense of difficulty of starting at the bottom.”

Is the idea to look at these typically “crude” elements in another light?

“Absolutely. My work is about questioning how much value we place onto things and whether we do so for their surface material or because of the thought that went into their inception. The fact that I make furniture that not only functions but that people collect is great. The fact that it is made out of strand board is the trick.”

Hard labor is such a democratizing  thing – anyone can potentially do it if they choose to do so – whereas being an artist is fated to fortune and chance. How did you reconcile with the idea of an ego in the art world?

“You have to have a fairly aggressive sense of yourself in construction because you’re against a bunch of guys that are trying to get work to feed their kids or pay their mortgages. You definitely had to have a sort of ego, but it was almost like an athlete’s or something—it was competition. Whereas fine art is so much more tricky and slippery as far as navigating one’sself. I think I was probably a lot more aggressive getting design/build work than I ever have been at pushing my own works. Even though I come from an art background, that has always been much more foreign to me.”

You’ve been collaborating with Steven Klein for several years now, what stands out the most from what you’ve worked on together?

“We’ve done so much. We did his first big show at Deitch Projects with [the architecture firm] Lot-Ek. His house in Bridgehampton, which was so overwhelming for me. It was right when I was going from working for a contractor to being on my own, and to get thrown into that project was sort of like, “Okay, figure everything out. You’re 27, but figure it out.” It was everything from how the house was going to look, work, be paid for, and keeping myself from going crazy—it was trial by fire. Every time I worked with Gideon Ponte it was interesting. All the things we did with Lee McQueen were great. In fact, I think back to those times now with such a different perspective. In 2002 McQueen was huge, but he wasn’t what he is now. So I think I was maybe not as impressed as I should have been back then. I was also young and striving to be out in front. I didn’t have as much head space to appreciate the things that were going on right in front of my face.”

What have been your most creatively challenging experiences with Klein?

“The frameworks were always challenging—to figure out new ways to present his work with each body being different. I don’t want to say that they set work was not challenging—because they were, and we did a lot of unique things—but they were always in good collaboration. Steven has a great way of disagreeing with you and then making it sound like his idea was yours. But his aesthetic and his willingness to let you run with things is why he is as good as he is. If he finds someone that he trusts and he likes, he’s willing to allow them to take it a step further. And that’s they key; that’s how you get things out of people that are special.”

What’s the most important thing you’ve learned about your own artistic practice through your collaboration with him?

“Not to listen to too many people. It’s so easy to get sidetracked or to dilute your aesthetic because of another person’s take. And while it’s fine to enter into those types of dialogues—and you have to, you can’t make work in a vacuum—you also have to remember that those are comments. You shouldn’t hear too much. If you start catering too much to people, they might like it but it won’t exactly be yours anymore.”