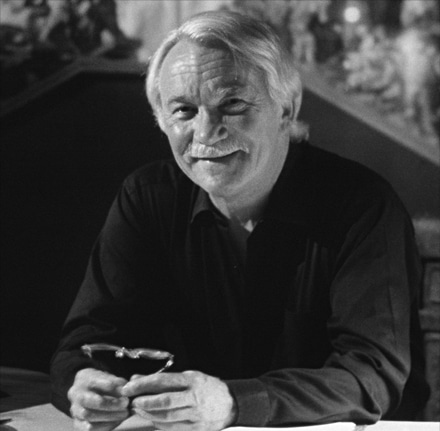 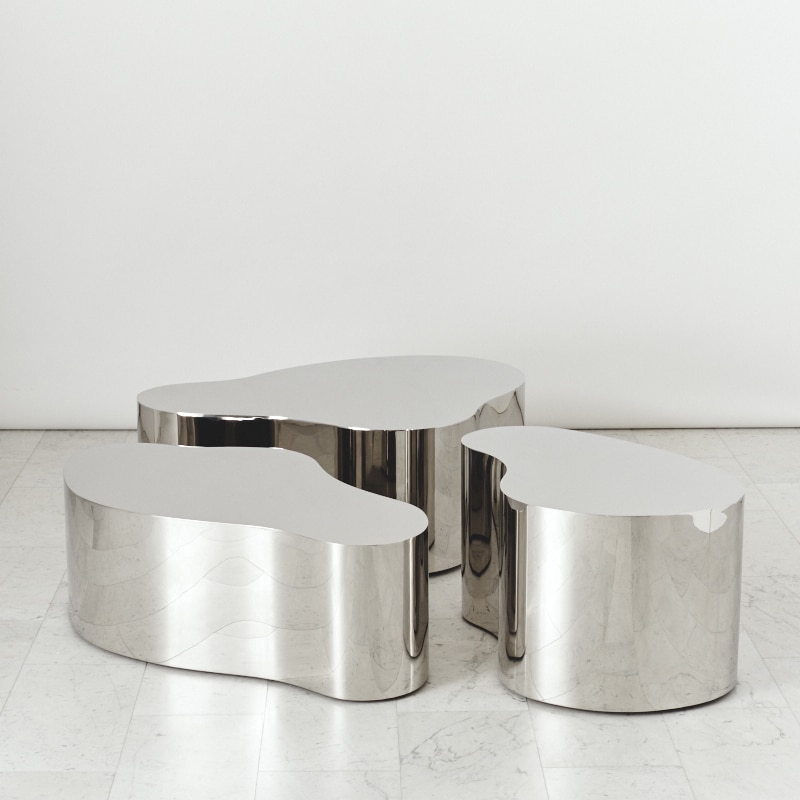 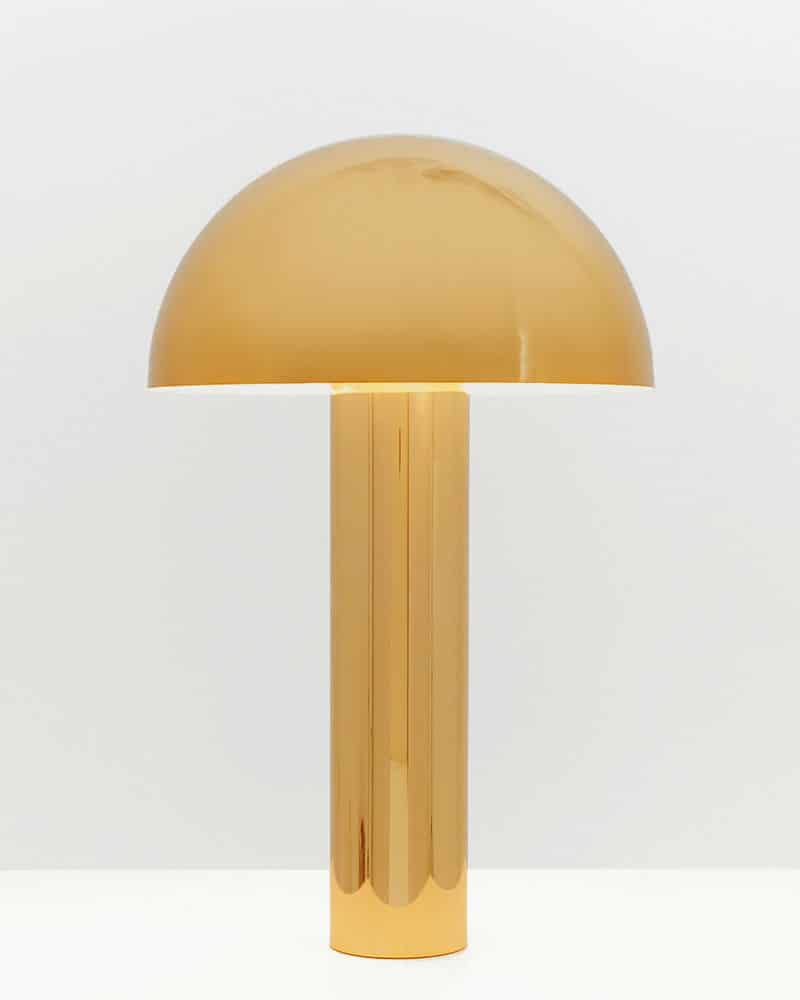 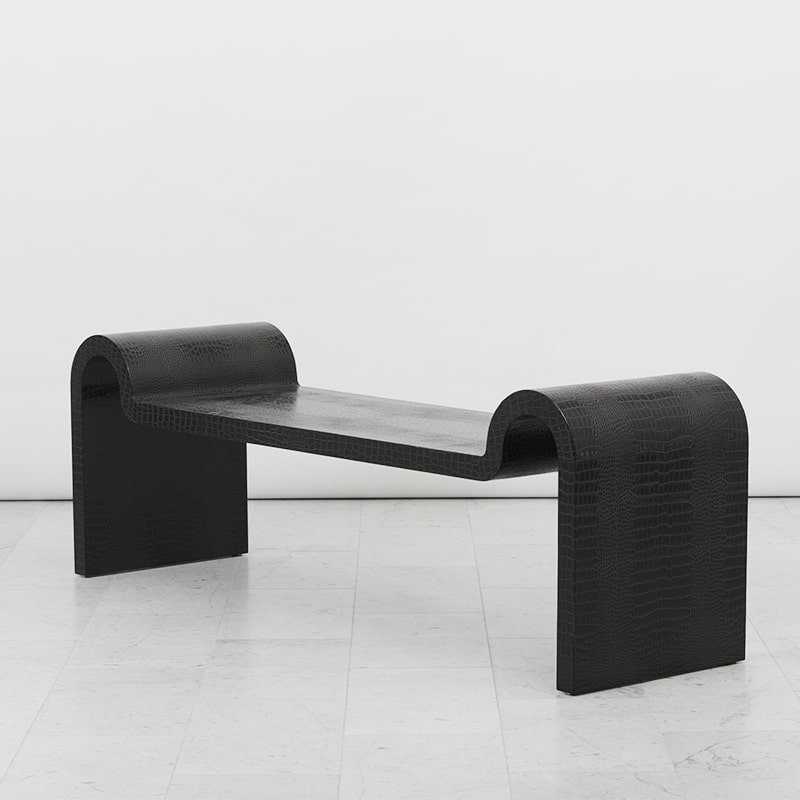 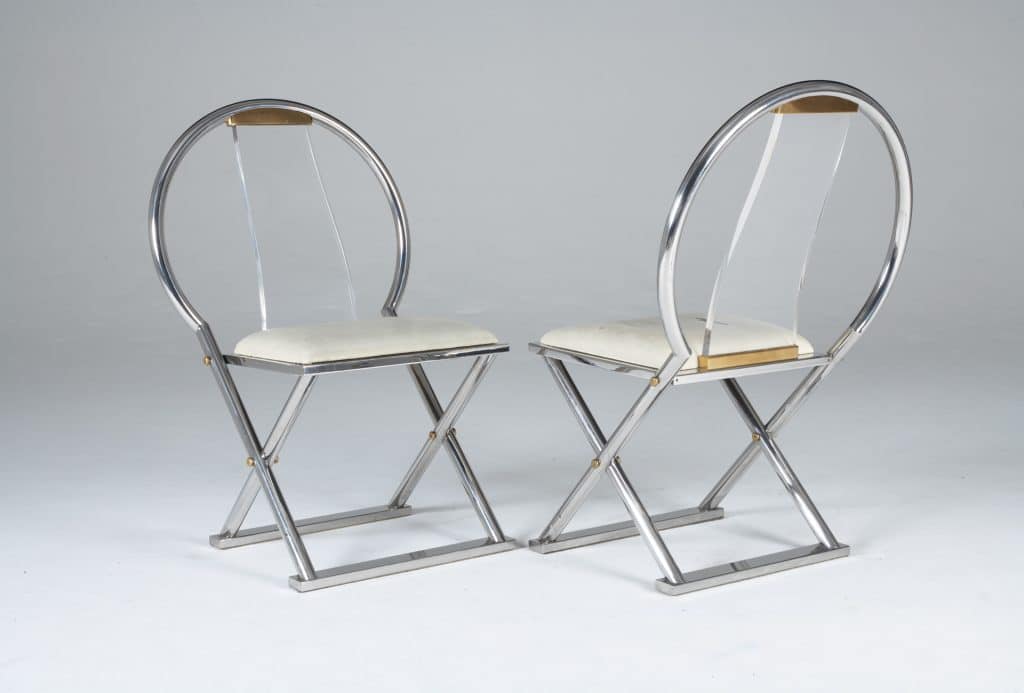 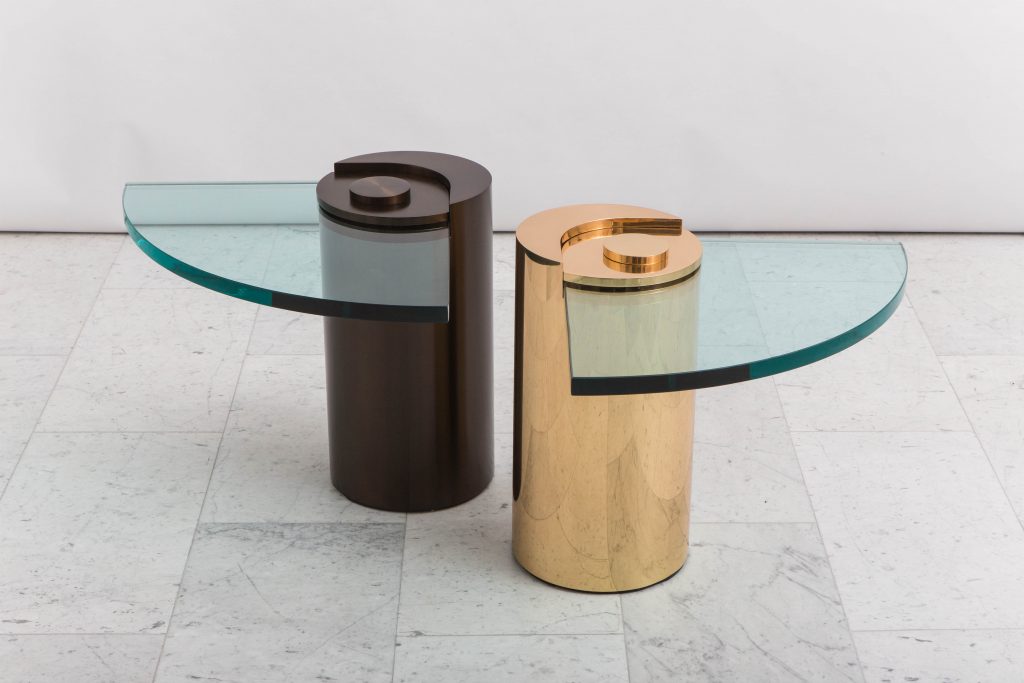 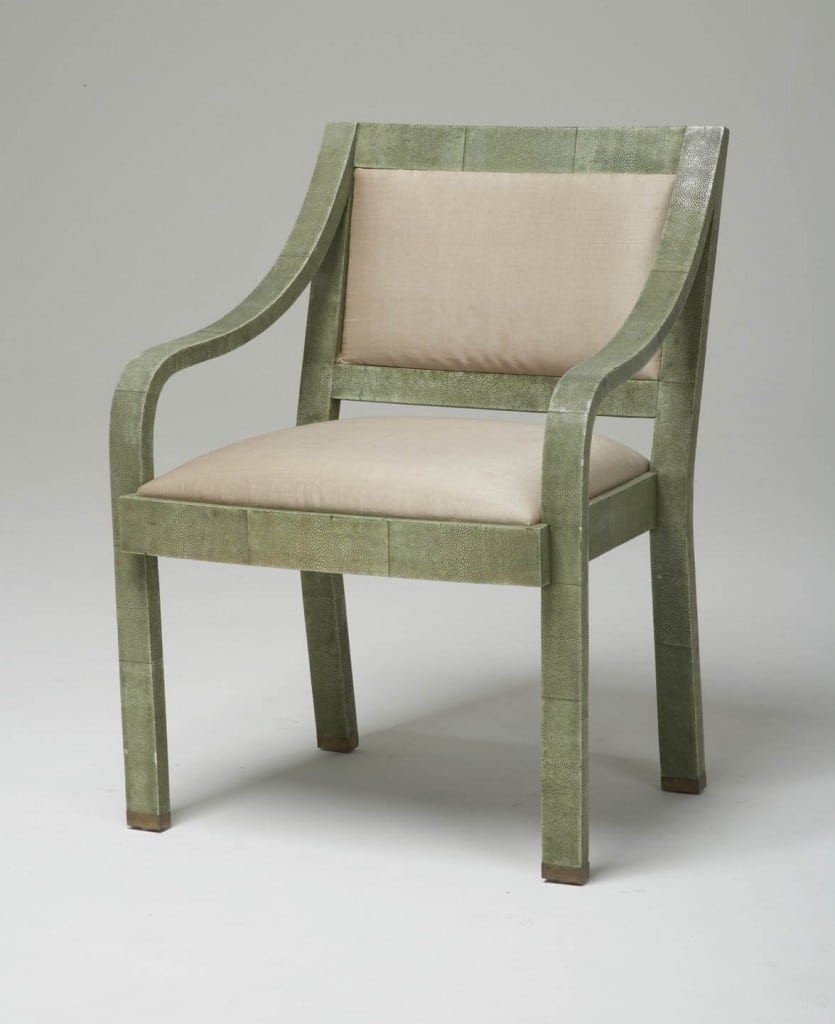 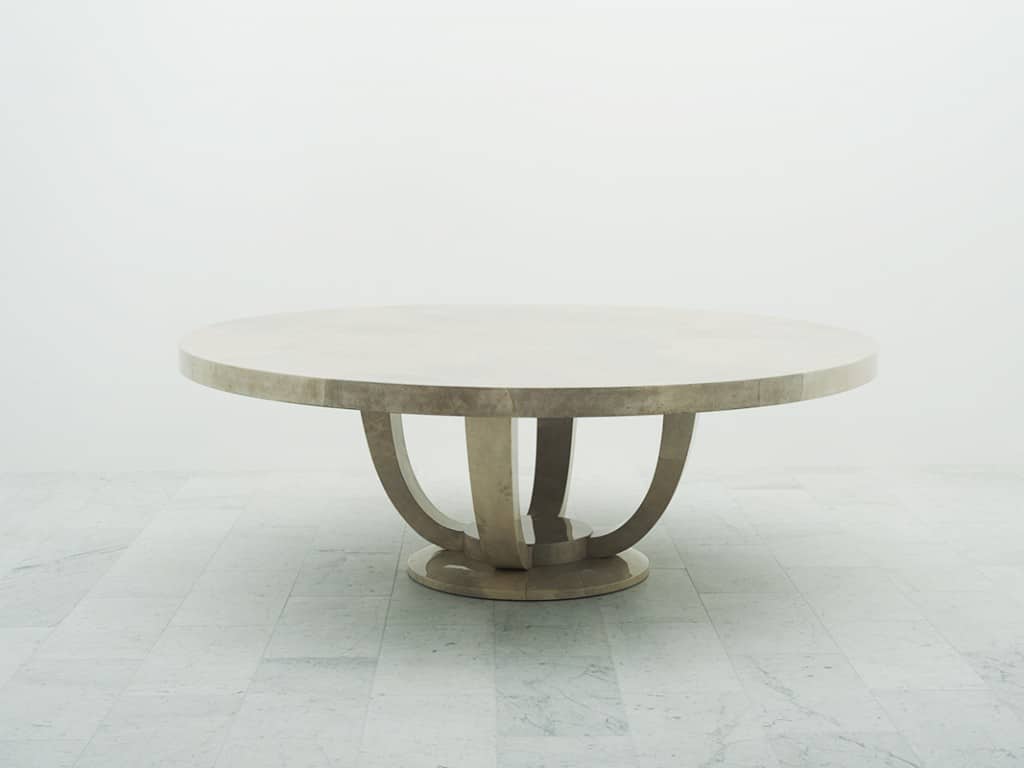 The New York designer, who first achieved success in the 1960s, redefined glamour by bringing together elemental shapes and luxurious materials.

Karl Springer might never have become one of America’s top furniture designers if it hadn’t been for the Duchess of Windsor. He was working as a window dresser for Lord & Taylor in Manhattan in the 1960s when he took a bookbinding class and began covering small accessories—books, picture frames, and tiny tables—in exotic skins such as cobra and python. When the duchess, previously the American socialite Wallis Simpson (for whom a lovestruck King Edward VIII abdicated his throne in 1936), encountered one of Springer’s telephone tables, it was lust at first sight. She bought the diminutive two-tier stand and follow edit up with a wide range of Springer’s other wares. “Suddenly, everyone in her social circle wanted that table,” says Evan Lobel, owner of New York’s Lobel Modern, who is at work on a book about the designer. “That really launched his career.”The duchess wasn’t the only high-profile figure who fell for Springer’s unique glamour, which blended simple forms with spectacular materials, including sharkskin shagreen, goatskin, parchment, embossed leathers, Lucite, lacquered linen, horn, bone, and feathers. Springer offered a new, distinctly American twist on French Art Decofrom the ’20s and ’30s, channeling inspiration from designers like Jean-Michel Frank and Émile- Jacques Ruhlmann at a time when many homeowners began desiring a little more outright opulence.

As both his business and the scale of his pieces grew in the ’70s and ’80s, Springer’s customers came to include Jackie and Aristotle Onassis (for whom he named one of his most iconic chairs), Frank Sinatra, Diana Ross, Joni Mitchell, Geoffrey Beene, and Björn Borg. “His pieces were status symbols,” says Lobel. “If you had Karl Springer in your home, you had made it.” Springer was born in Berlin in 1931. In the late ’40s, he befriended Mateo Lettunich, a cultural affairs adviser with the U.S. State Department, working to rebuild Berlin’s theaters after World War II. When Lettunich returned to New York in 1957, Springer went with him. Although he’d never formally studied design, he soon proved to have a natural ability with interiors.

In 1967, Springer’s Greenwich Village apartment landed in the New York Times Magazine. Titled “Money Isn’t Everything,” the feature documented the designer’s success in crafting a dynamic interior with objects he had acquired for “next to nothing at junk shops. ”Ironically, the furniture Springer designed in the years that followed was extraordinarily expensive. He was obsessed with quality and worked with the finest artisans—first in New York, and later, around the world— on items ranging from goatskin- covered dining tables to lamps with thick Lucite bases. “Everything depends on uncompromising workmanship and rigid control,” he once said. “I allow nothing to represent me that is not my best effort.” Indeed, “he personally designed every piece,” says Tom Langevin, who worked with Springer from 1977 until the designer’s AIDS-related death in 1991 and now authenticates Springer’s creations for auction houses. “He was absolutely a perfectionist and was always refining the designs.” That painstaking attention to detail handcrafted construction, and use of exotic materials were all reflected in Springer’s prices. His batik leather backgammon boards, for instance, cost $1,800 in 1974 (price not adjusted for inflation), and a typical Lucite table with glass top cost $12,630 in 1980.

At his peak, he had a 20,000-square-foot showroom in Manhattan and outposts in Los Angeles, Miami, Munich, and Tokyo. “He literally created his own genre of contemporary-American design in the late ’70s, when most high-quality furniture was either traditional, transitional, or imported contemporary,” says New York dealer Todd Merrill, who has long sold Springer’s vintage pieces. Merrill began reissuing some of the designer’s most coveted works with Karl Springer Ltd. earlier this year. The range includes Springer’s Free Form cocktail table, comprising organically shaped units in polished stainless steel; the Mushroom lamp, with a semispherical shade in brass or gunmetal; and the Sculpture bench, a long, symmetrical perch with arched ends that is covered in textural materials like alligator-embossed calfskin. Much like today’s rising market for bespoke, artist-made furniture, “in the late ’70s and ’80s, money was no object, and Karl was at the epicenter,” says Mark Eckman, one of Springer’s former assistants, who bought the rights to Karl Springer Ltd. in 1994. Eckman has also reissued some of Springer’s other designs, including the famed telephone table, with his own company, Matthews & Parker. And no wonder—Springer’s designs are once again as popular with leading interior designers as they were three or four decades ago. “Karl Springer’s materials and proportions are just right,” says Ellie Cullman of Cullman & Kravis, who has installed Springer tables in her projects. “They add a touch of glamour without dominating a room, and fit seamlessly with furniture from other periods.” Says Jeffrey Schuerholz, owner of Fat Chance Los Angeles, “A lot of things he did still look modern now.”