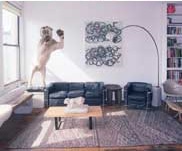 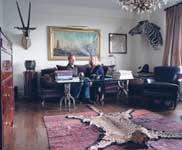 DECORATORS ROAM WHERE THE DEER AND THE ANTELOPE PLAY

At Todd and Lauren Merrill’s apartment, top, a leopard rug and heads of zebra and oryx; at Eric Goode’s, a stuffed white tiger and, standing on a pillow, a stuffed dog.

MOST of us accept fur-trimmed suede coats and fake animal-skin pillows piled on the sofa. Now, as if from some great collective-unconscious storage closet, have arrived embalmed pets, preserved deer heads and stuffed emus to decorate home and store. While the attitude may be ironic, the taxidermy is real.

It makes sense that the set designer Derek McLane would use 15 mounted heads and a stuffed fish to depict a 1930’s lodge in Reno, Nev., in the revival of “The Women.” But what are we to make of the numerous sightings of stuffed critters used as props in fashion magazines?

In this month’s Vogue, Lauren duPont, wearing the latest from the Bill Blass resort line, stands before stuffed antelopes and lions in the game room of a family estate. This month’s Vanity Fair pictures the music producer Rick Rubin posing with a stuffed bison, Cape buffalo and antelope in his chic Los Angeles house.

Taxidermy has even been used to boost appetites. Last spring, Eric Goode and Sean MacPherson decorated Park, their restaurant in West Chelsea, with stuffed parakeets and a stuffed peacock. “I wanted it to be really warm and comfortable without being corny,” Mr. Goode said. “The idea was to introduce nature where we could apply it, to use real material.”

At Olives restaurant in the W Hotel in Union Square, a stuffed rooster presides over the dining room, evoking a Tuscan country kitchen. Eat Here, a cafe in SoHo seeking to emulate an old-fashioned English club, has two deer heads. “People are coming back to the layering of history, something more eclectic and interesting,” said Tom Lussier, who owns the cafe. He recently catered a dinner party where the table was set with fur place mats (cut from old thrift shop fur coats) and the centerpiece was a taxidermic fox caught in midleap.

People are pulling their great-uncle Ludwig’s stuffed moose head out of the attic or pretending that they once had a great-uncle Ludwig. “People are tired of being politically correct,” said Bill Yox, an award-winning taxidermist in upstate New York. He sells a lot of deer heads and moose heads for city dwellers to mount over their country fireplaces.

It is all a matter of degree. “As long as it is not endangered, is over 50 years old and is not a cat, I am O.K. with having it in my house,” said Mitchell Owens, the interior design director of Elle Decor magazine.

Larry Bloomquist, a Louisiana-based taxidermist and editor of Breakthrough, a magazine dedicated to the art of taxidermy, said: “We like to call it the Hemingway effect. We have been seeing more and more decorators in need of mounted game heads for people who aren’t hunters.”

In the age of antibacterial hand soap and the steady communication of our emotions, Hemingway, that hard-drinking, big-game-hunting master of pith, appeals to our more rough-hewn sensibilities. And home décor is once again following fashion, where the monochromatic uniform is out and a mixture of leather, white lace and cowboy boots (hello, Ralph Lauren) is in.

Indoors, they are finding this warmth with leopard-skin rugs, pinto pony pillows and stuffed zebra heads.

Todd Merrill, a taxidermy collector who runs Todd Merrill Antiques on the Lower East Side, said that the photographer Peter Beard has been hugely influential. “He reminds us that there is no greater beauty in the world than nature, no matter how gruesome at times,” Mr. Merrill said.

According to Henry Galiano, who owns the natural history shop Maxilla and Mandible on the Upper West Side, artists reintroduce wildlife at decisive moments. (From the Romantics to Francis Bacon’s shrieking baboons, there is nothing like using nature as a metaphor.) The popularity of animals as art in the 80’s “had a lot do with Georgia O’Keeffe, whose paintings celebrated the sculptural beauty of skulls,” he said. Damien Hirst, he noted, recently made dead animals acceptable again as décor.

Just last month, Rob Keller, a California artist, showed his mummified animals in comic poses at Thomas Korzelius Fine Art in SoHo. “Everything just cycles back,” he said. Like all derivative trends, the nostalgia for taxidermy is inextricable from longing for the past.

Taxidermy had its roots first in sentimentality and then in art and education. The process involves removing, treating and mounting a skin on an artificial form. It wasn’t until the Victorians imposed their nomenclature on the natural world that it was adopted by museums to teach science, said Stephen Quinn, the senior project manager in the exhibition department at the American Museum of Natural History.

The modernist revival of the last 15 years left no room for a stuffed boar. But there has been an increased consumption of snakeskin and fox fur, sumptuous fabrics and feathers “as a counterpoint to a decade or so of modernism and minimalism,” said William Sofield, an architect and interior designer. “Now that people are more comfortable with materials that were off limits, they are getting even more adventurous,” he said.

Taxidermy represents the ultimate in taboo luxury. “We think all deer are Bambi’s mother,” said Mr. Owens, who spent his childhood summers on his grandparents’ farm in Oklahoma. Urbanites, he says, just don’t understand hunters.

But while animal rights advocates have a hard time convincing people to give up leather shoes and upholstery, Eric Goode got hate mail over a pair of stuffed Dobermans that stood in the entry hall of M.K., a club he opened in the late 80’s. But it didn’t quell his enthusiasm. “I hadn’t had them killed,” he said. “I had gotten them at a dog mortuary.” His personal collection of stuffed animals includes a pouncing tiger and a baby English bulldog.

Mike Zohn, who sells oddities (Martha Stewart’s staff bought a stuffed turkey) at Obscura Antiques in the East Village, suggests we are entering an age of brutal honesty. “There’s been a run on taxidermy over the last several months — more designers, more decorators,” he said. “People are coming around to the fact that they like weird stuff, objects that provoke emotions, even if that means fear or disgust.”