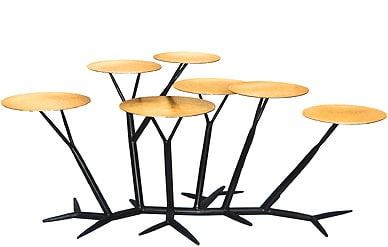 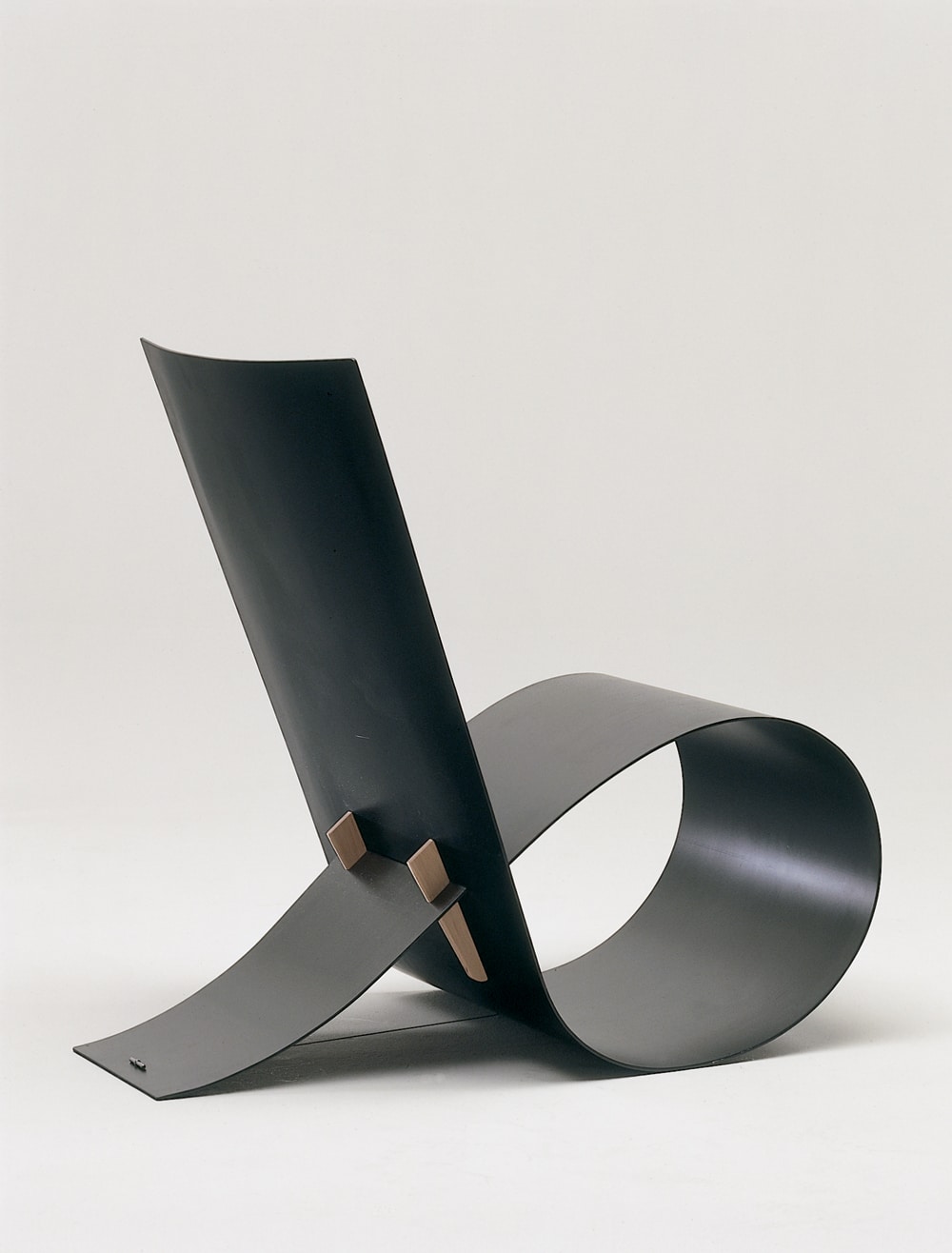 The sleek lines of the 1997 Loop chair by Niels Hvass are created in aluminum with wood details. 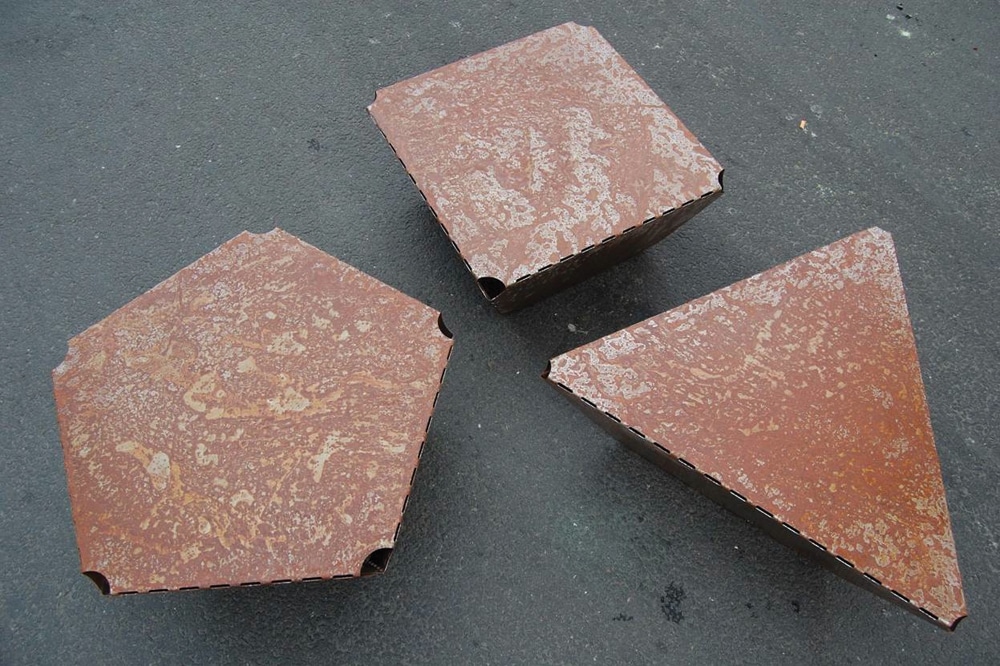 Max Lamb’s Rusty Steel Sheet tables come in a variety of shapes, each produced in an edition of ten.

Three from a set of four woven-rope and wrought- iron chairs designed by Haines for the Beverly Hills estate of Irene Rich, 1950s. 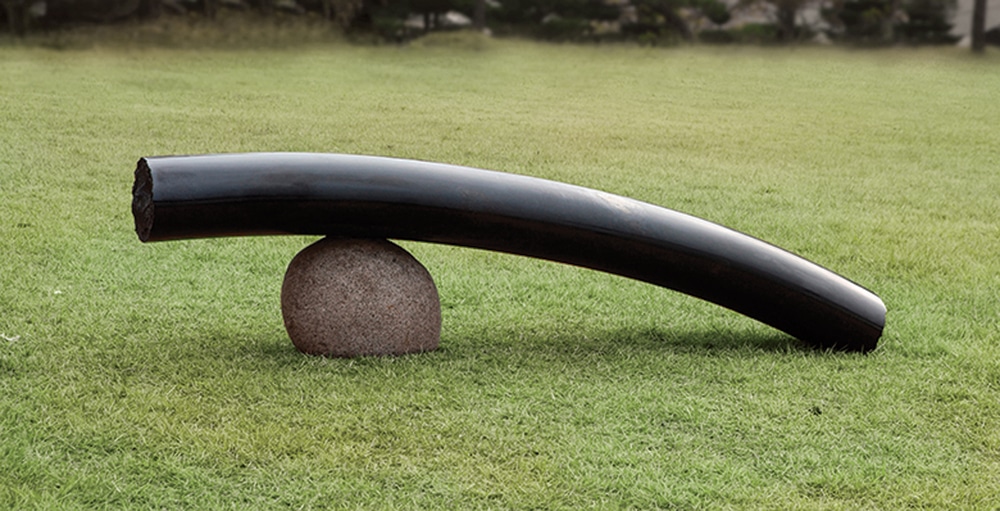 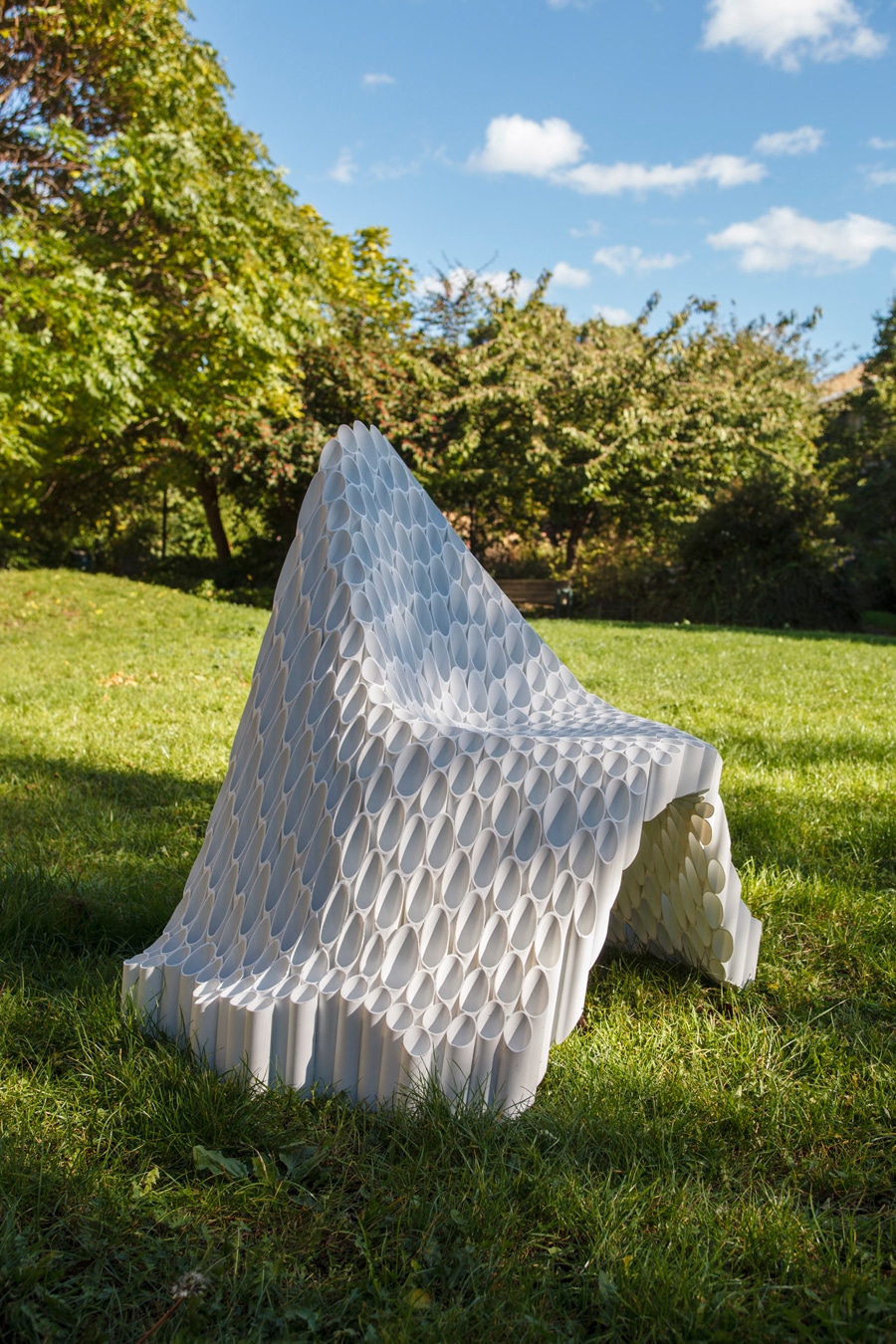 TAKING IT OUTSIDE: DESIGN FOR THE GARDEN

Look at today’s concentration on nature,” says Lowery Stokes Sims, chief curator at the Museum of Arts and Design, who organized the museum’s 2013 exhibition Against the Grain: Wood in Contemporary Art, Craft and Design. “It stands to reason that designers internationally are turning their attention to the garden and outdoor living in general, and in doing so embracing a decided movement away from the traditional iron bench to more creative interpretative designs.”

A host of designers is offering pieces intended specifically for the garden, and collectors, curators, interior designers, landscape architects, and archi­tects are turning their attention to this area with renewed interest. In this high tech age, many designers are using new materials and new technologies, while others are rooted, so to speak, in traditional materials and techniques. For example, the London design collective Yard Sale Project, which is represented by Todd Merrill in Greenwich Village, is turning out computer-generated wood chairs. On the other hand, both Brazilian designer Hugo França and New Yorker Michele Oka Doner focus on fashioning enormous felled tree trunks into organic seating in tune with the millennium’s emphasis on the environment.

Julien Aurélie heads the Paris branch of the London-based Carpenters Workshop Gallery. Com­manding center stage there are Pablo Reinoso, Ingrid Donat, and Rick Owens. “The swirling, curvilinear organic shape of Reinoso’s 2010 steel Huge Sudeley bench is in harmony with nature,” Aurélie says, making it perfect for the garden (see our cover). The work of the Argentinean-born Paris-based Reinoso can be found in the Centre Pompidou, the Museum of Arts and Design, and the Vitra Design Museum.

Donat turns to concrete for furniture that is surprisingly sleek rather than cumbersome. She also works in bronze, creating pieces—from seating to chests—that bear engraved patterns drawn from sources as diverse as art deco and tribal tattooing and are frequently used outdoors by designers and collectors alike. For decades Donat’s furniture has been sought by A-list architects and designers such as Jacques Grange, Tony Ingrao, Peter Marino, and Robert Couturier. In fact, Couturier furnished practically an entire Jackson Hole, Wyoming, com­mission with Donat designs. “Her work is strong, always innovative and surprising,” he says. Prices run from $27,500 to $275,000.

Rick Owens is best known as a fashion designer, but he also lends his hand to design for the garden. One example at Carpenters Workshop is his 2013 Plug table in white marble, in an edition of eight, priced at $175,000.

Also in Paris, the gallery En Attendant Les Barbares features the work of Eric Robin, who was first discovered by the late interior and product designer Andrée Putman. The blackened iron legs of his tables evoke tree branches, making them perfect for the outdoors. “Clients for his oeuvre include Pierre Bergé,” says Agnes Standish-Kentish, who heads up the gallery. A coffee table with seven gold-leafed circular surfaces is about $15,000. “We had a huge response to Eric’s work at PAD Paris with many sales,” she says.

Paris dealer Maria Wettergren features the work of Danish designer Mathias Bengtsson, whose Spun Chaise in carbon fiber can be found in the permanent collection of the Museum of Modern Art. It wasn’t designed specifically for the garden, but, Wettergren says, it “can be put outside.” The same is true for Danish designer Niels Hvass’s 1997 aluminum Loop chair, the slim lines of which appeal to contemporary art collectors. Besides the PAD fairs in London and Paris, Wettergren participates in Design Miami and Design Miami/Basel as well as Salon: Art and Design.

In Cologne, Germany, Gabrielle Ammann’s eponymous gallery has long been an international magnet for collectors, connoisseurs, and curators. Demonstrating her global reach, Ammann participates in Design Miami and Design Miami/Basel as well as in Collective in New York and PAD London. Noting that a number of designers are stepping up and creating a wide range of challenging work for the garden, she singles out India-born, Amsterdam-based designer Satyendra Pakhalé, whose designs, she says, are “rooted in India with its long tradition of bronze and marble work, but his viewpoint is the future.” Also of note, she adds, is Korean Bo Young Jung and Belgian Emmanuel Wolfs’s 2009 Tree Trunk series of bronze benches and stools, which appear to be bark-clad but with the “cut” ends polished. Prices range from $40,000 to $90,000. “The demand is huge and in the past five years, I’ve witnessed a jump of 40 percent for design created for the garden,” Ammann says. “No one can compete with the beauty of nature. But to find design that is in dialogue with the landscape is a rarity, and the work of Pakhalé and of Jung and Wolfs achieves that with sensitivity.”

Back in 2008 Gallery FUMI was the first design gallery to open in Shoreditch, London’s trendy contemporary art district. Since then it’s been a go-to destination for collectors and curators. Max Lamb was among the first designers brought in by directors Valerio Capo and Sam Pratt. Driving demand is Max’s distinctive sensitivity to sculptural design,” Capo says. His 2008 editioned Rusty Steel Sheet tables and chairs are desired by collectors for garden use. “Lamb also has a series of tables, chairs and cabinets that look like black rocks coated with a slick oil like finish,” Capo says. Called Poly, objects in that line are tagged at $5,000 apiece and up. Lamb’s garden seating also includes his 2013 Chatsworth Yew Logs, from yew trees felled at the historic English country house, with some of the bark still intact. Each is priced at $7,600. FUMI will show Lamb’s work at its Porto Cervo gallery in Sardinia this summer, as well as at Design Miami/Basel in June. FUMI also takes part in PAD London, Design Miami, and Collective.

Los Angeles dealer Patrick Dragonette offers a range of design for outdoor use. Top of the list, Dragonette says, are vintage pieces by the late William Haines, acclaimed for his interiors of Sunnylands, the Palm Springs home of Walter and Lenore Annenberg, and his work for Ronald and Nancy Reagan, among other Hollywood notables. On offer, for $12,000, is a set of four Haines rope and wrought-iron chairs of about 1950 from the Irene Rich estate. A pair of cast bronze torchères from Jack Warner’s Palm Springs place is priced at $11,500.

New York’s R and Company, based in Tribeca and a regular at Design Miami, Design Miami/Basel, and Collective, represents Brazilian designer Hugo França, who carves furniture, predominantly seating, out of felled pequi trees. Zesty Meyers, who heads up R and Company, says, “Hugo’s work is an important commentary on sustainability and material re-use.” França’s work can be found in notable public collections in Brazil, such as the Instituto Cultural Inhotim in Brumadinho and the Museu Da Casa Brasileira in São Paulo, but his organic and highly sculptural seating and sculpture are hardly strangers to these shores. They were recently on display in the Fairchild Tropical Botanic Garden in Miami in an installation curated by Cristina Grajales. This summer and fall (to October 11) his work in craggy pequi wood is included in an exhibition titled exteriors the explosion of outdoor furnishings, at LongHouse Reserve in East Hampton, New York. The price range for França’s work runs from $3,000 for small wall-mounted shelves to over $250,000 for large scale works.

“I love selling works that are installed outdoors because of the way they interact with nature,” says Marc Benda of Friedman Benda in New York’s Chelsea district. These would certainly include the basalt benches of Korean designer Byung Hoon Choi (some measure up to nine feet in length), which were featured in the gallery’s recent exhibition Byung Hoon Choi: In One Stroke (see MODERN, Winter 2014, p. 88). The show practically sold out with prices from $40,000 to $200,000. Another favorite of clients at Friedman Benda is Ron Arad’s 2007 striated stainless steel Thumbprint chair—one from the edition of six was placed in a collector’s garden.
Jim Elkind, a Harry Bertoia specialist, is the head of Lost City Arts also in New York. “Bertoia’s Sonambient works are well suited to the garden as the components, when rustled by the wind, sound like church bells,” Elkind says, adding that examples can be found in one client’s wading pool in Arizona as well as in gardens in the Hamptons, on Boston’s North Shore, and even in Mexico. Recently Auckland, New Zealand, interior designer Katie Lockhart acquired Bertoia’s copper Hollow Gong of 1965, which stretches eight feet across by more than four feet high, for a garden in India. Prices for large Bertoia sculptures range from $100,000 to $300,000. Of course, contemporary renditions of his 1952 Diamond chair for Knoll now found at Design Within Reach are popular in gardens and poolside as well.

Greenwich Village dealer Todd Merrill spotlights the work of Britons Ian Spencer and Cairn Young who make up the Yard Sale Project collective. “For their 2012 Roccapina V chair, the pair fused the natural and digital worlds,” Merrill says. Spencer and Young turned to computer technology to make the pattern of hundreds of rectangular wood pieces that comprise the chair, which appears “pixilated yet with a smooth surface.” It was included in the Museum of Arts and Design traveling exhibition Against the Grain.

The Yard Sale Project’s 2013 OSMA chair is entirely handmade of polypropylene plumbing pipes that have been hand-cut and hand-sanded and assembled in a honeycomb pattern. The chair is intended to be buried six inches deep in the garden, allowing plants to grow up through the pipes. “It’s about making the chair into a living part of the garden,” says Merrill, who participates in Art Miami, Art Southampton, and Masterpiece London.

In Soho Cristina Grajales also showcases design appropriate for the garden, among them pieces by Christophe Côme and Michele Oka Doner. Côme is creating tables with cast-iron sides in open rectangular and square shapes topped by slabs of Spanish cedar. “Côme is recognized globally, and Peter Marino alone has commissioned his work for several Chanel boutiques,” Grajales says. Artist-designer Michele Oka Doner, who is represented in the Musée des Arts Décoratifs, the Centre Pompidou, and the Metropolitan Museum of Art, works in many mediums and on many scales. Appropriate for the garden would be her two 2012 Chitra benches, carved from massive Australian pines and priced at $45,000 each. They were featured in the Fairchild Tropical Botanic Garden in 2011 and 2012.