Financial Times: How to Spend ItThe Line of BeautyApril 1, 2013 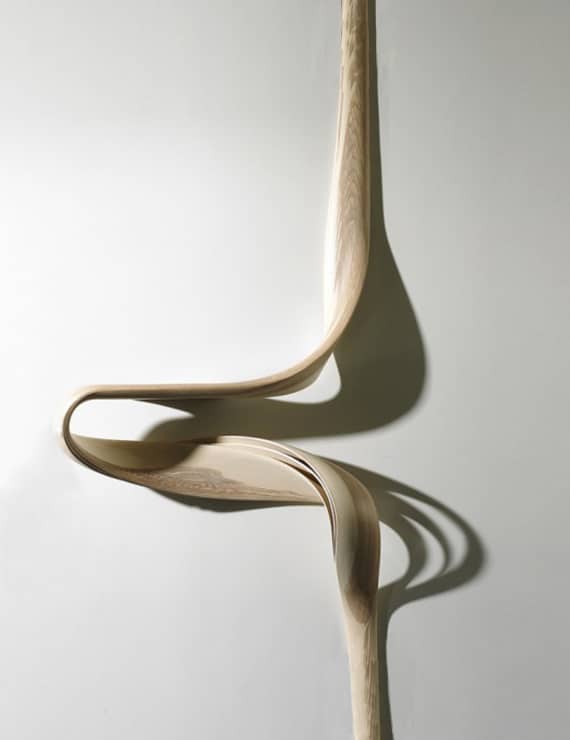 The Line of Beauty

Shelves are no longer the support act. Now they are sculptural works of art in their own right.

Poised at the point between conceptual art and domestic fixture, functional sculptures in the form of shelves are capturing the imagination of collectors. The latest designs, from free-form compositions of timber ribbons to shiny aluminium splinters and polyconcrete cornices, are more than pretty platforms on which to display books and other treasures. These design-art plinths, personalised with an ever-changing gallery of finds, represent an enduring partnership between artist and collector.

Patrick Perrin, co-founder of the Paris and London event Pavilion of Art + Design, describes himself, only half jokingly, as “Pad’s best client”. His own wide-ranging collection embraces a number of sculptural shelves. At home there’s a highly polished aluminium piece by Vincent Dubourg and four of Sebastian Errazuriz’s Piano Shelves; in his office, two large bookcases by Andrea Branzi. These shelves are populated by a community of arbitrary acquisitions: porcelain boxes, small sculptures, volumes on design icons, bookends in the shape of a rhino – all of which Perrin describes as “the mix of things you like, you want to read and you want to live with”.

The dual nature of the shelves, as artworks and showcases, makes them perfect for such omnivorous collectors. Artists are equally captivated by the form because it represents an intimate collaboration with those that buy their work. Painting on the Wall (2010, price on request), from Philip Michael Wolfson’s Arts of the Scholar series, is a dynamic, wall-wide platform, in zebrawood and red lacquer with gilded edges, that requires the additions of its owner to bring it to life. Wolfson explains: “Scholars would unroll painted scrolls to tell stories. Painting on the Wall is a story of mountains, hills and lakes, and the story continues when the buyers put their personal objects on it.”

Wolfson, who has been working “at the crossover between art and design” for more than two decades, has been riffing on the shelf since 2005, when he conceived RipTear, a painted aluminium work with the elegance of a Stealth Bomber. Then came WallCurve (2009), a shelf/side table from the Line series, inspired by the movement of a hand-drawn line. He had worked for a decade as senior designer in the practice of architect Zaha Hadid, before leaving to set up his own studio in 1991. Hadid’s designs for curvilinear futuristic spaces helped inspire Wolfson’s own functional sculptures. “It developed my eye,” he says. “We designed one-off pieces, interiors and functional sculptures in her studio, and the objects were unique because our spaces were not your normal ones.” Hadid’s own shelves are typically swooping, organic forms, such as the polyurethane resin and lacquer one created for the Dune Formations collection (2007, price on request).

The history of the design-art shelf isn’t long. One of the early templates that inspires aspiring sculptors is Dear David (1996), Danny Lane’s epic commission for David Pears’ former home in Hampstead. The artist is best known for big, bold glass sculptures created on behalf of corporate clients such as Canary Wharf Group, Microsoft and British Land, as well as furniture made from glass and forged steel, but he also relishes the comparative domesticity of shelflike installations. “It’s something I’d really like to return to,” he says. “There’s a tradition of artists working on functional objects or architecture-related creations that dates back to the great artists of the Renaissance. Dear David is basically a painterly approach to materials. There’s a tremendous amount of detail – sandblasted drawing on the mirror, a very romantic freehand graphic, glass shards with other plates of glass cantilevered off them, and the long glass shelf itself, like a huge brushstroke. The client had all sorts of things around the house – artworks, models, stones – and we thought it was interesting to arrange them graphically, to float the objects on the shelves. It made the whole thing into a fantastic composition.”

As frequently as they host a private cabinet of curiosities, design-art shelves display metre upon metre of art books. Art collector François Blanc, founder of Paris-based PR firm Communic’art, remembers the moment he first encountered Andrea Branzi’s Tree series of patinated aluminium and birchwood bookcases (€35,000-€85,000) at a Carpenters Workshop Gallery exhibition. He realised he had found the ideal partner for his art library: “What was fascinating was this alliance between the emotion that I felt for an artwork and the use that I was about to make of it. I love the union between the wood and metal, the imagery of the growing tree and of the constrained shelves.” His Tree IV (€55,000) is now filled with books, laid flat so that the horizontal volumes counterpoint the vertical birch trunks that punctuate the composition.

New York gallerist Sean Kelly believes it is the symbolism of the form that draws his artists to revisit the bookshelf. “Bookshelves are an analogue storage facility for ideas. Artists love the metaphor of a bookshelf, and if artists pay attention to something, then collectors pay attention, too.” Among the installations that drew the most interest at last year’s Art Basel Miami Beach was a characteristically playful design by the Cuban collective known as Los Carpinteros. Set on the oceanfront, Güiro was an “art bar”, a lattice of wooden niches intended to be used as shelves to rest books and drinks, commissioned by Absolut Art Bureau, part of Absolut vodka, the associate partner of Art Basel.

Los Carpinteros, aka Marco Castillo and Dagoberto Rodríguez, has been working with bookcases since 2006, producing several spins on the theme in plywood and maple veneer. The Estanteria series (2008, £61,000) features surreal bulges rippling the familiar grid pattern. “In the Estanterias we were interested in pushing the limits of the natural material and calling into question the traditional structure for these types of objects,” comments Los Carpinteros (for the collective speaks with one voice). “One of the most fascinating questions for us as artists is the functionality art has. It can be a kind of game, a way of interacting with the audience. Many times, the work begins the moment it is ‘used’.”

Artists are often intrigued to discover what their work looks like once it is in use. Sebastian Errazuriz, creator of the Piano Shelf (from $15,000), says, “I love visiting my clients’ houses and seeing how their Piano Shelves have a different configuration from last time. It’s extremely satisfying for me to see them adapting their shelves to their needs.” Originally designed in 1997, but first exhibited 10 years later at Art Basel 2007, his shelves get their name from their resemblance to black piano keys. Each key, handmade from rauli wood and secured, perfectly level, with a tiny hidden screw, can be lowered or raised to break up or lengthen the area for display. The shelves take several months to complete. “From a production standpoint it doesn’t make sense to fabricate them like we do; it’s almost masochistic. But, much like a good chef, I believe that if you craft your work with love and dedication, that shows in the final result.”

The most recent recruit to the high-shelf-esteem club is designer Joseph Walsh, who began to experiment with shelves in 2012. “I wanted to make pieces that responded to the space in which they would exist, and adapted to it,” he explains. If you like your sculpture sinuous and biomorphic, in prettily oiled olive ash timber, Walsh’s lyrical Enignum series (£15,000-£25,000, Enignum IV) will be your cup of tea. The artist describes the process: “I strip wood into thin layers, manipulating and reconstructing them into free-form compositions. I then shape these layers to reveal not only the honesty of the structure but the sculpted form, which is a unique collaboration of man and material.” Another spectacular biomorphic bookshelf is the Ammonite (£39,500) by Noé Duchaufour-Lawrance, from Meta: 15 carbon-steel cubes set in a coiling form to resemble the fossil.

Not all design-art shelves are refined craft objects. Last year Rabih Hage launched a limited-edition Colour Console bookshelf made from offcuts of Corian (£7,500), the material of high-end kitchen worktops, while Peter Marigold’s rhomboid-shaped Split Boxes (2008, from £180 for three boxes) call to mind squashed packing crates. The work is made from plywood strips, positioned to form a geometric pattern across a wall.

Sam Pratt, co-owner of Gallery Fumi, specialises in design art using unorthodox materials: “Our makers prove that craft is still thriving, but not in the forms you might expect.” His emerging names include Glithero, the collaboration between Tim Simpson and Sarah van Gameren, whose Bench Mould shelves, inspired by Victorian plasterwork, are made of polyconcrete (from £1,700). Another protégé, Max Lamb, has hand-carved a library installation from expanded polystyrene, coated in rubber paint (Poly Library, 2010, price on request). Perhaps these pieces, in unconventional materials, fulfil their brief as design art best of all, being entrancingly beautiful objects that challenge collectors’ preconceptions of what art is – while neatly storing their exhibition catalogues.

Financial Times: How to Spend ItThe Line of BeautyApril 1, 2013