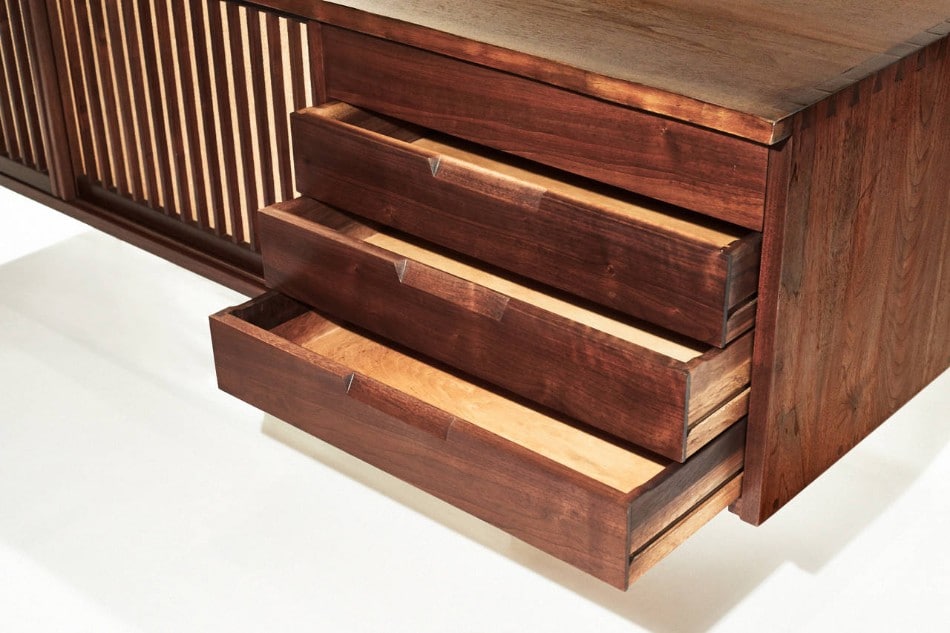 The right side of the console, which measures 84 inches long and 21 inches high, features two sliding doors and one section of four drawers. 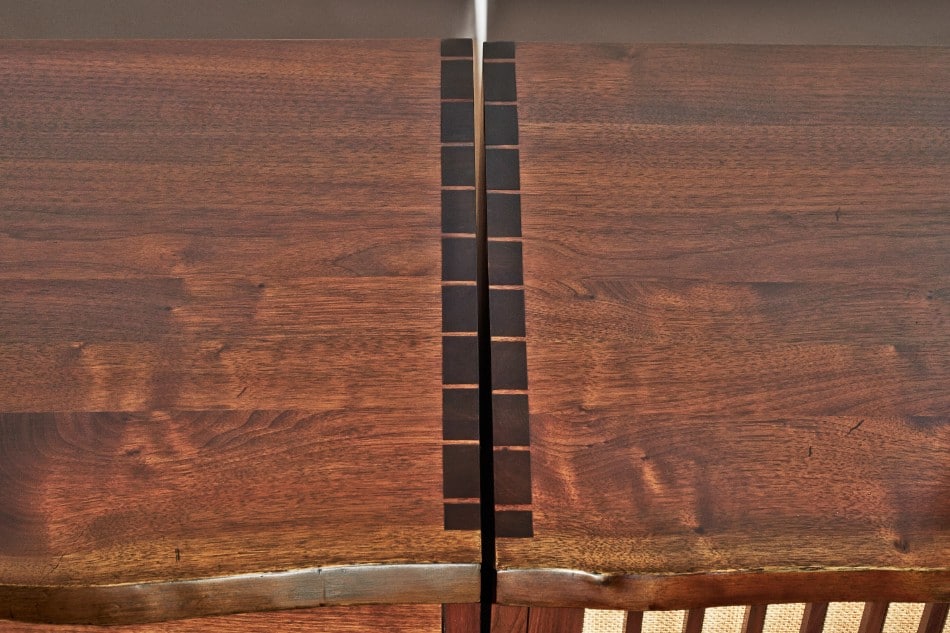 Merrill didn’t initially realize the two pieces of the console were part of the same piece until he studied the original invoices from the studio. 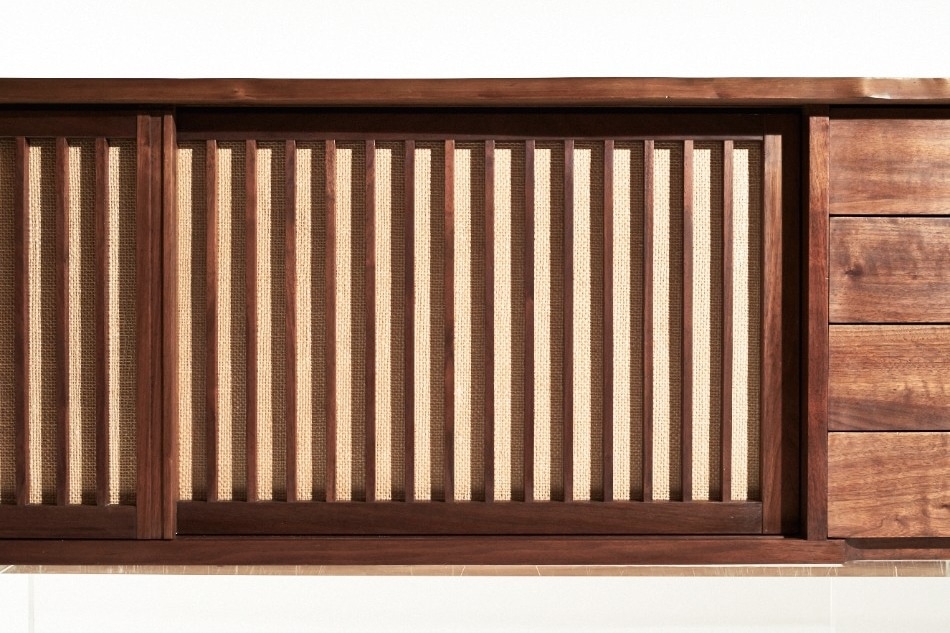 The backing behind the grills of the sliding walnut doors on the console’s right side is made from woven pandanus cloth, which is sourced from the tropical pandan tree, also known as a screw pine or screw palm. 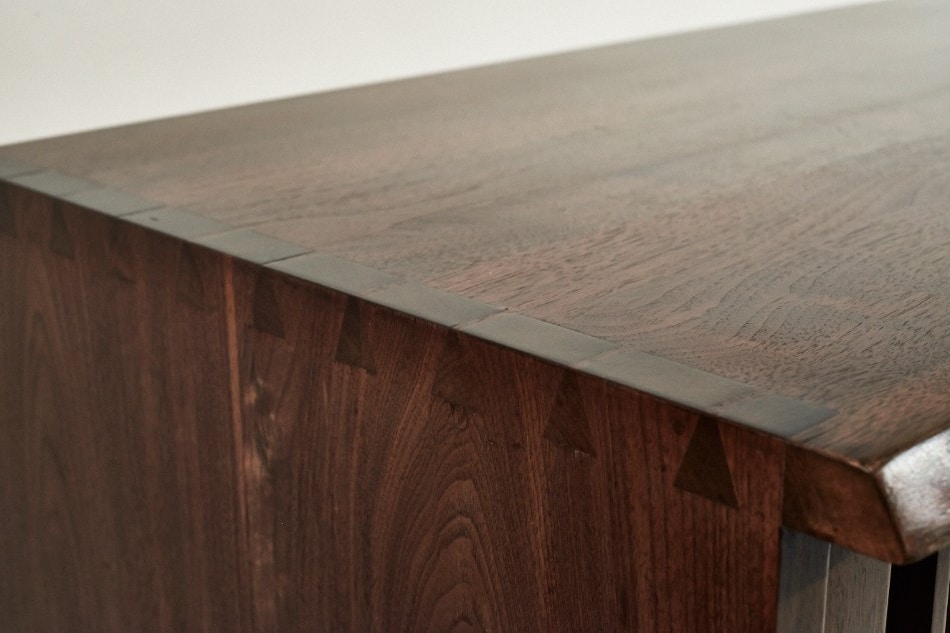 The console is made of Nakashima’s favorite wood, American black walnut. Though its top and sides appear to be made from single slabs of wood, in fact it’s comprised of different pieces meticulously fitted and glued together. 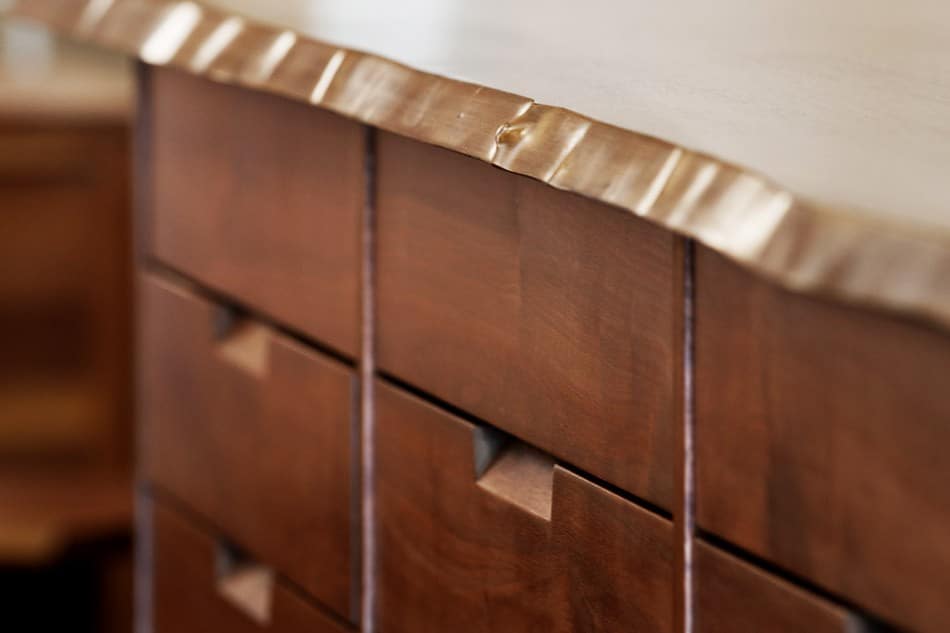 The console’s left side, which Merrill says is wholly one-of-a-kind in Nakashima’s output, has 12 small “face drawers” made of solid walnut. 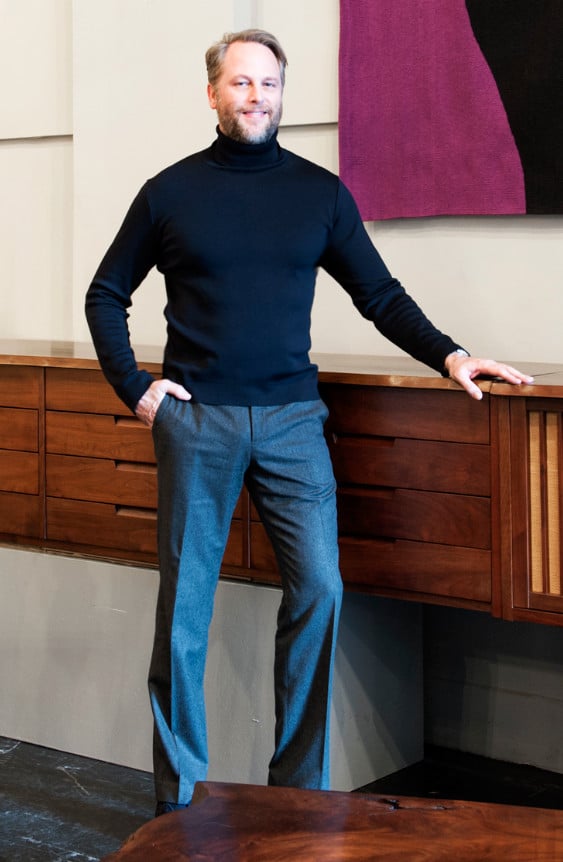 In addition to offering pieces by such 20th-century greats as Nakashima — as well as Paul Evans, Karl Springer and Milo Baughman, among others — Todd Merrill also specializes in contemporary studio design and custom-made items. 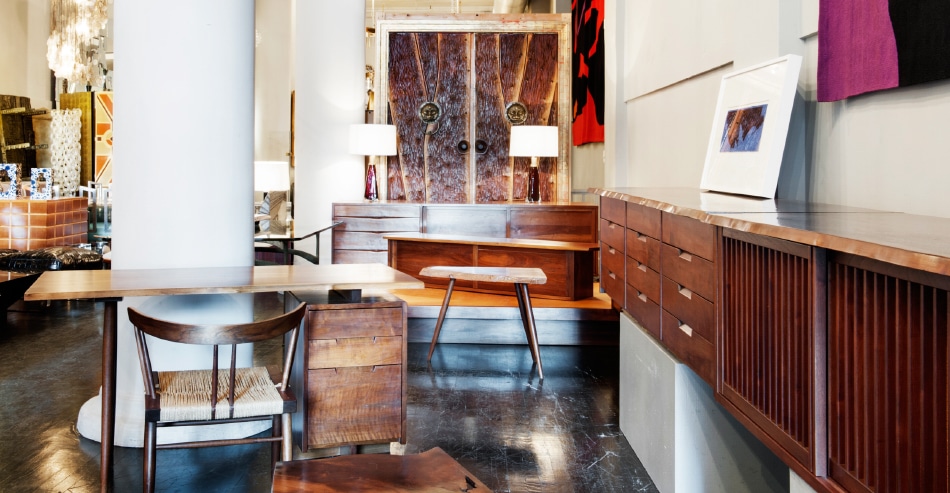 The suite of Nakashima furniture at Todd Merrill, including the console, at right, came from a single family who lived near Philadelphia and commissioned pieces from the woodworker from the 1950s through the 1970s; every item comes with the original invoice from the studio. 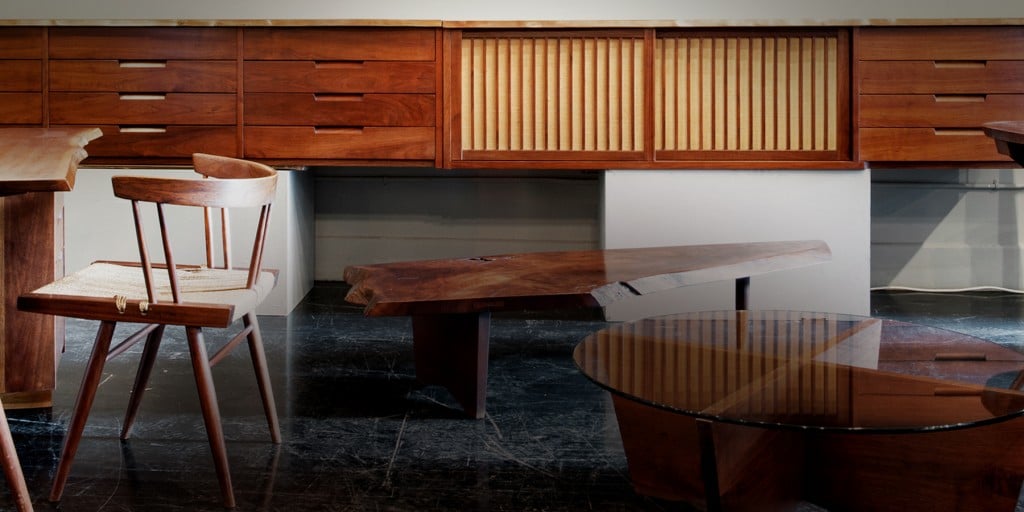 Not to be missed by fans of George Nakashima, New York gallerist Todd Merrill currently has on offer a newly-discovered suite of furniture by the great 20th-century master woodworker, including a two-part hanging console unlike anything else he ever produced.

Not to be missed by fans of George Nakashima, New York gallerist Todd Merrill currently has on offer a newly-discovered suite of furniture by the great 20th-century master woodworker, including a two-part hanging console unlike anything else he ever produced.

Though George Nakashima has been dead for nearly 25 years, the furniture the Japanese-American architect and craftsman made has never been more in demand, collected by Steven Spielberg, Brad Pitt and Diane von Furstenberg — as well as passionate aficionados from Germany, Switzerland, France and beyond. Often called the father of the American Craftsman movement, Nakashima had his reputation cemented in 1974 when Nelson Rockefeller famously commissioned him to create 200 pieces for his home in Pocantico Hills. Since then, he has been the subject of books, major exhibitions at museums and gallery shows, and even the focus of an entire booth at the prestigious TEFAF fair in Maastricht, the Netherlands.

Born in Spokane, Washington, in 1905, Nakashima made woodworking an artistic activity. Between 1943 and his death in 1990, he and his team of fellow woodworkers reportedly produced some 25,000 pieces of furniture, each one individually crafted from sustainable wood he personally selected and inventoried in his rural workshop in New Hope, Pennsylvania (now a National Historic Landmark). He kept meticulous records, including drawings, bills of sale and letters from clients. 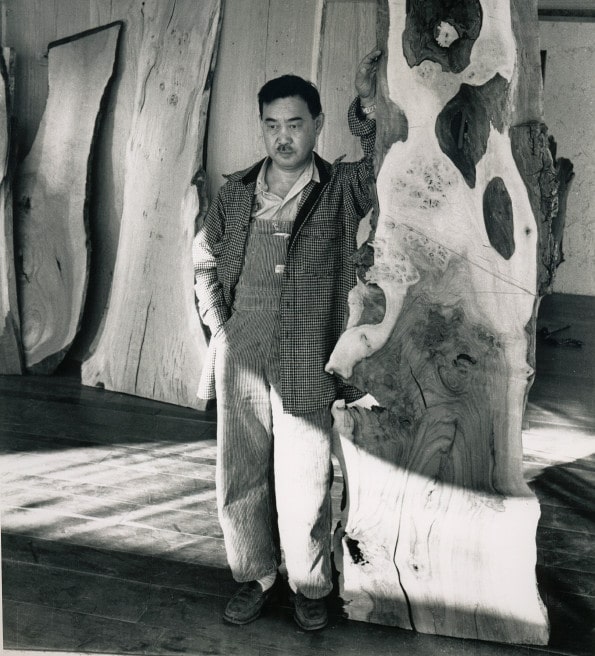 The work of American Craft pioneer George Nakashima, seen here in the 1950s with a slab of wood, his medium of choice, has never been more in demand (photo courtesy of Nakashima Studio). Top: New York dealer Todd Merrill recently acquired a remarkable suite of the creator’s furniture.

Given this eminent legacy, it is of no small significance that a previously unknown Nakashima form has recently been unearthed: a monumental two-part hanging console with drawers and sliding panels dating from 1957. It’s currently on view at Todd Merrill, a Manhattan gallery that since 2000 has specialized in mid- to late-20th-century design and studio furniture. Merrill recently purchased the console with a group of other Nakashima pieces (also currently on view at the gallery, the suite includes a desk, chair, shelf, settee and an assortment of low tables). These were all commissioned by a single family who lived near Philadelphia. “They were early Nakashima clients who commissioned things from the nineteen-fifties through the seventies,” Merrill says. “I have the original invoices from the Nakashima studio. The pieces are marked with the client’s name.”

Nakashima’s daughter, Mira, herself a master craftsperson who has been running the Nakashima workshop since her father’s death, calls the console “unique to the Nakashima repertoire.” Designed to be attached to a wall at waist height, the piece is 15 feet across. “It is the only double cabinet meant to hang together that Nakashima ever made,” Merrill says. It is also among the largest pieces he ever made, a real showstopper. 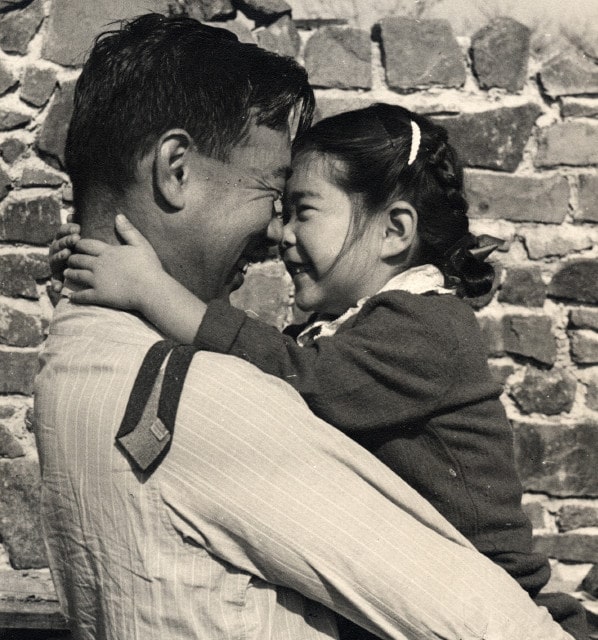 Nakashima is seen here with his daughter, Mira, an accomplished craftsperson in her own right, who has been running the family’s Pennsylvania studio since her father’s death in 1990. Photo courtesy of Nakashima Studio

“I didn’t know until I got the two pieces of the console on the floor that it was actually one piece,” Merrill continues. “Then I studied the invoices.”

The halves are not identical. Each is divided into three parts. The left half, 96 inches long, has 12 small “face drawers” of solid walnut. The right side, 84 inches long, features two sliding doors and one section of four drawers. The unequal configuration adds liveliness to the composition.

The console is constructed of fine American black walnut, Nakashima’s favorite wood. The designer stockpiled prized timber from all over, particularly woods with burls, knots and highly figured grain. He air-dried the wood for years, then kiln dried it, before touching it. (Air dying maintains the color and graining patterns.)

“Solid wood is a challenge,” Nakashima once wrote. “Each board of each species is individual and must be understood, the good characteristics explored.” And he was passionate about figured wood. “There’s a spirit in trees that’s very deep,” he said. “I find the spirit bouncing up and down in the grain of the tree. In order to produce a fine piece of furniture, the spirit of the tree lives on. I can make an object that lives and can live forever if used properly. My happiness is to find this relationship with a tree.”

“SOLID WOOD IS A CHALLENGE,” GEORGE NAKASHIMA ONCE ADMITTED. “EACH BOARD OF EACH SPECIES IS INDIVIDUAL AND MUST BE UNDERSTOOD, THE GOOD CHARACTERISTICS EXPLORED.”

The right side of the console front, which is 21 inches tall, has two sliding walnut doors with grills on top of a backing of woven pandanus cloth (which resembles burlap). “There has been only one other composition similar to the right side of the console,” Merrill says. He goes on to explain that the design of the left side is completely unique.

The 180-inch-long console top looks like two book-matched sections of one giant board. The grain is dark apart from the very front, which has a band of paler sap wood in a continuous free-form edge. “This is subtle but thought-out and intentional,” Merrill points out. The top, however, is not one piece.

According to Mira Nakashima, “The cabinet tops are several boards glued together. It appears that each of these boards was painstakingly matched to appear as a continuous top, including the free-edge front.”

Nakashima’s craftsmanship is legendary. He exploited the figuring in the wood. Corners and drawers are all dovetailed. “This all took a tremendous amount of work,” Merrill says. Presumably, this piece won’t be available for long, so make a point of checking it out at the Todd Merrill Studio, at 65 Bleecker Street in Nolita, before it’s gone.

The suite of Nakashima furniture at Todd Merrill, including the console, at right, came from a single family who lived near Philadelphia and commissioned pieces from the woodworker from the 1950s through the 1970s; every item comes with the original invoice from the studio.