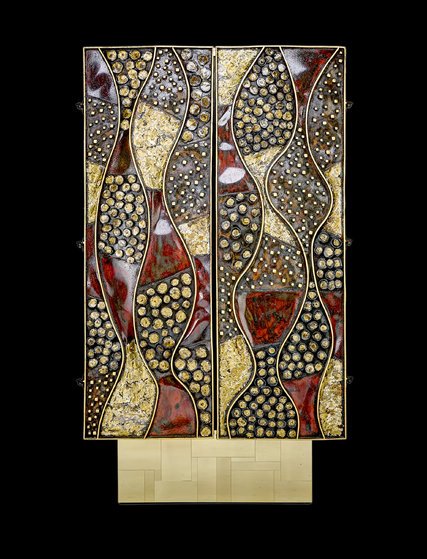 A 1977 bronzed steel cabinet with 23-karat gold leaf is among the Evans pieces being sold by Rago Arts.

An Exceptional Argente cabinet, which went for $293,000, several times its presale estimate, in May 2016.Creditvia Wright 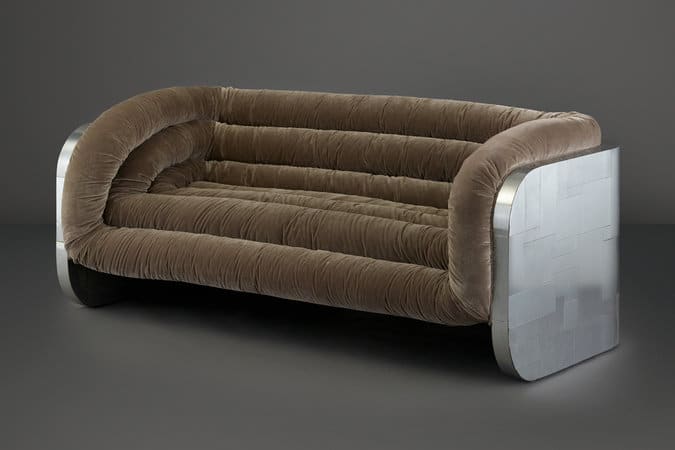 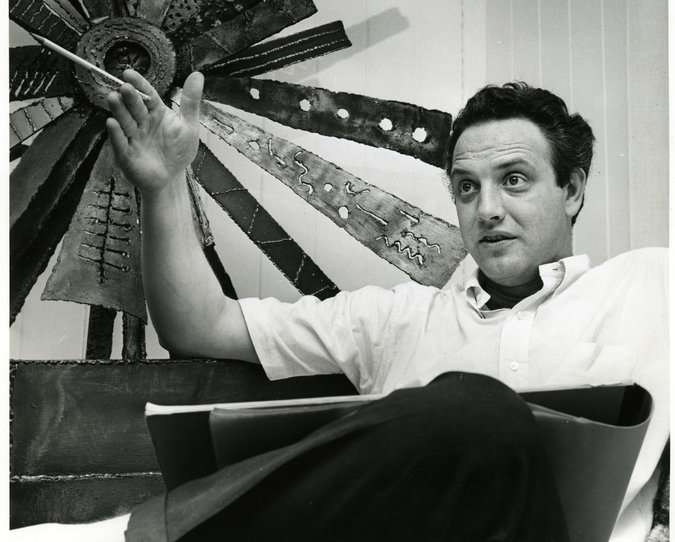 Paul Evans, circa 1962, from the book “Modern Americana: Studio Furniture From High Craft to High Glam” (2008) by Julie Iovine and Todd Merrill.

Perhaps the most remarkable thing about the furniture designer Paul Evans’s posthumous ascent is not that he has gone from dustbin to deified over the last decade, or that his work has been collected by big names like Gwen Stefani, Lenny Kravitz and Tommy Hilfiger.

It is that his signature pieces — 1960s credenzas that look as if they are encrusted with barnacles — have been met with turned-up noses and occasional disgust from the most powerful people in the design world.

J. F. Chen and Wyeth, arguably the country’s two leading galleries for midcentury modern design, have practically made a point of ignoring Mr. Evans, even as his offbeat works break auction records.

“I have two Evans pieces in my showroom, and neither of them look like Evans,” said Mr. Chen, speaking from his office in Los Angeles. “It’s not my thing.”

Never mind that a wavy-front cabinet designed by Mr. Evans in 1967 sold for $287,500 in 2015, moving into the upper echelons of American furniture. “And who would have seen that coming?” said David Rago, who sold it through his auction house, Rago Arts.

Not Richard Wright, who eight months later beat that number when he sold one of Mr. Evans’s silver aluminum and black paint cabinet pieces with dripping squiggle-like seams through his company, Wright, in Chicago for $293,000.

Three coffee table books focusing on Mr. Evans have been published in the last decade, including one by the New York-based dealer Todd Merrill, whose TriBeCa-based showroom teems with Mr. Evans’s chrome case pieces and steel coffee tables that look as if they were built from stalagmites. Two mini-documentaries about Mr. Evans’s life, one produced by Mr. Merrill and another by the design journalist Daniella Ohad, have been completed. In 2014, the James A. Michener Art Museum in Doylestown, Pa., staged a retrospective of Mr. Evans’s work.

But having designed mirrored sofas with a Mondrian-by-way-of-Liberace vibe, Mr. Evans simply can’t be explained in the same breath as Hans Wegner, whose teak coffee tables and wool-covered Papa Bear chairs serve as Modernist shorthand for all that is ordinarily admired about midcentury design and its imperviousness to the cool-today, tired-tomorrow quality of decorating trends such as overdyed Persian rugs and fiddle-leaf fig trees.

“I’ve seen interiors that are all Paul Evans; it’s not really where you want to go,” Mr. Wright said on a recent afternoon, as he planned an auction for 37 of Mr. Evans’s most gloriously tacky, gloriously disco pieces, which takes place Thursday in Chicago.

In all likelihood, it will do very well for him.

Amid a status-obsessed, contemporary art scene where the kitschy ironic and the easily identifiable are prime selling points for artists (see: Richard Prince and Andy Warhol), it makes some sense that the man who is becoming the most collectible American furniture designer of the late 20th century is also considered by many to be the least deserving of that designation.

A furniture-world Forrest Gump, Mr. Evans — who grew up in Newtown, Pa., where his father taught English at a Quaker school — morphed with the times. He understood fashion, embraced youth culture and built custom pieces for celebrities like the ventriloquist Shari Lewis and the singer Roy Orbison. That ability “to transform as the culture around him was shifting” gave him posthumous appeal, said Kirsten Jensen, the chief curator at the Michener Art Museum.

In the folksy ’60s, Mr. Evans designed ornate welded steel-front cabinets that drew inspiration from the sculpture work of Picasso, Harry Bertoia and Julio González. His twist was repositioning those influences within his own beatnik framework.

Without much money, he and his studio partner Phillip Lloyd Powell even got their wood from the reject pile of George Nakashima, their neighbor in New Hope, Pa.

At the height of his success during the disco ’70s, Mr. Evans teamed up with the furniture behemoth Directional, where he and a team of 70 produced the now-coveted chrome-and-brass-accented Cityscape line, including aheadboard shaped like a marquee — complete with electric glow bulbs. (For extra money, Mr. Evans and his team installed upholstery in Studio 54.)

In 1980, disco fell out of favor and Mr. Evans’s business hit the skids, so he closed the studio in New Hope, moved to New York and designed sleek, industrial beds and wall units that could be rotated or raised via remote control. Bring on the boxy-suit-wearing bankers and their social X-ray wives!

By the mid-80s, Mr. Evans was no longer making a living and he began drinking heavily.

On March 6, 1987, he shut down his business and drove from New York to his vacation home on Nantucket. The next morning, he went for a cup of coffee on his porch, had a massive heart attack and died, said his assistant Dorsey Reading. He was just 55.

No obituary for Mr. Evans appeared in The New York Times. When a veteran folk art dealer named John Sollo located a pile of Evans pieces at the Brimfield antiques show in Massachusetts shortly after his death, it took months to identify who had designed them.

On the occasion when Mr. Sollo showed his Evans finds to friends, they told him he was nuts. “People would come over and say, ‘That’s the worst thing I’ve ever seen,’” Mr. Sollo sad. “My wife’s mother arrived for dinner, took one look at a buffet of his and said, ‘What have you done to my daughter?’”

Gary Carlson, who with his partner Robert Loughlin was another early collector of Mr. Evans’s work, said, “We couldn’t get rid of the stuff.”

In a way, Mr. Sollo understood why the furniture pieces were hard to love. “It’s bombastic, it’s in your face,” he said. “Men almost always liked it better than women.”

And even then, not always. “The first time I saw it, I thought it was the ugliest furniture I’d ever seen,” Mr. Merrill said. “Like something from a Klingon warship.”

But eventually, he and other tastemakers came around.

One of the first to buy Mr. Evans’s pieces was the celebrity hairstylist Oribe, whose clients included Cher and Jennifer Lopez. Others included the party promoter Robert Isabell, who planned the Met Ball for Anna Wintour and worked on Caroline Kennedy’s wedding to the interactive designer and artist Edwin A. Schlossberg.

By the late ’90s, Mr. Sollo had teamed up with Mr. Rago to form Rago Arts, where they tirelessly promoted Mr. Evans. The relatively low number of highly distinctive, hand-welded pieces made them highly collectible just as the distinction between art and furniture was breaking down.

“There used to be a much stricter boundary between art and furniture,” said Mayer Rus, the West Coast editor of Architectural Digest. “Now, it’s much more porous.”

The disco-y mass-produced furniture of Mr. Evans’s later days existed in greater supply and appealed to younger consumers often with less money (and who had a Halston fantasy). The hippie-dippie studio work from the early ’60s reeled in those who lived through the era (and wanted to be a version of the Rolling Stones).

“I must have bought, like, 20 pieces,” said Diane von Furstenberg, referring to her collection of his Brutalist-inspired credenzas. “The thing I like is that it’s a little bit Flintstones.”

Ms. Stefani, another fan, seemed to be channeling Michelle Pfeiffer from “Scarface” with a pair of brass and chrome mirrored love seats for her Beverly Hills living room. “It added instant warmth and depth to the space,” Ms. Stefani’s interior designer, Kelly Wearstler, said.

Jordan Roth, the theater producer, had a similar reaction to the lighted headboard, which now sits in his Manhattan apartment. “I saw a beautiful tension between the glamour of the surface and the craft of the patchwork,” he said. “It’s the centerpiece of the room.”

The question is whether prices for Mr. Evans’s pieces can go much higher.

In addition to the Wright auction, Rago Arts is selling nine Evans pieces on Jan. 22, including a seven-foot-tall bedazzled cabinet Mr. Evans designed in 1977, made with bronzed steel, 23-karat gold leaf and ruby red pigment.

Could this break the record?

Mr. Chen, ever the Evans skeptic, thinks he’s already seeing signs of a correction, though he noted that he also thought the stock market was going to crash after Donald J. Trump was elected president, only to watch it hit a new peak three days later.

Not that it really matters where he is concerned. “At this point,” Mr. Chen said, “I couldn’t afford to get in on Paul Evans even if I wanted to.”