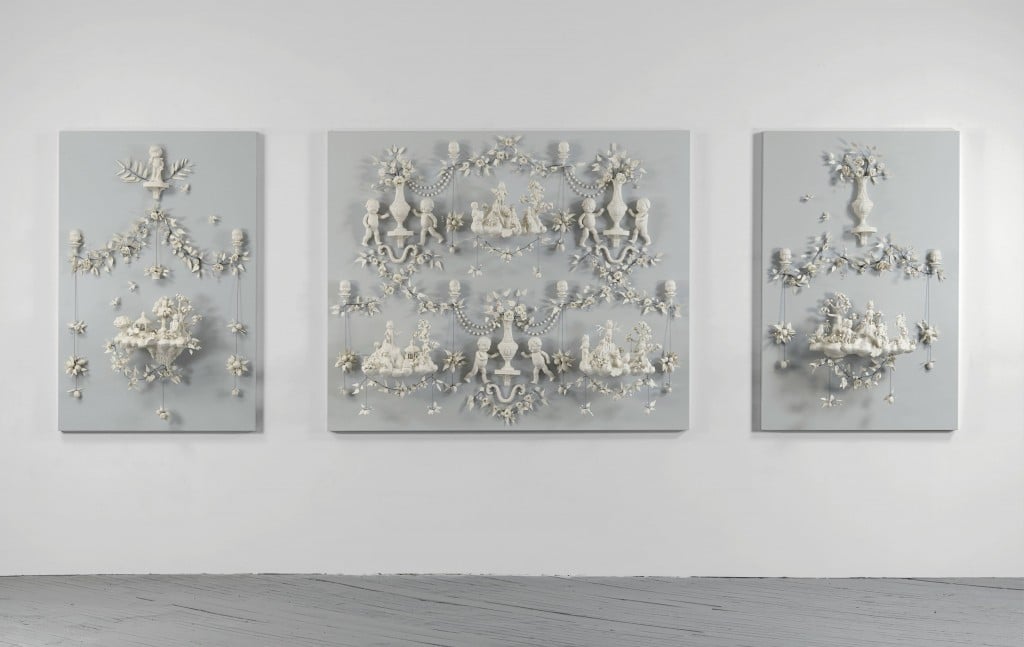 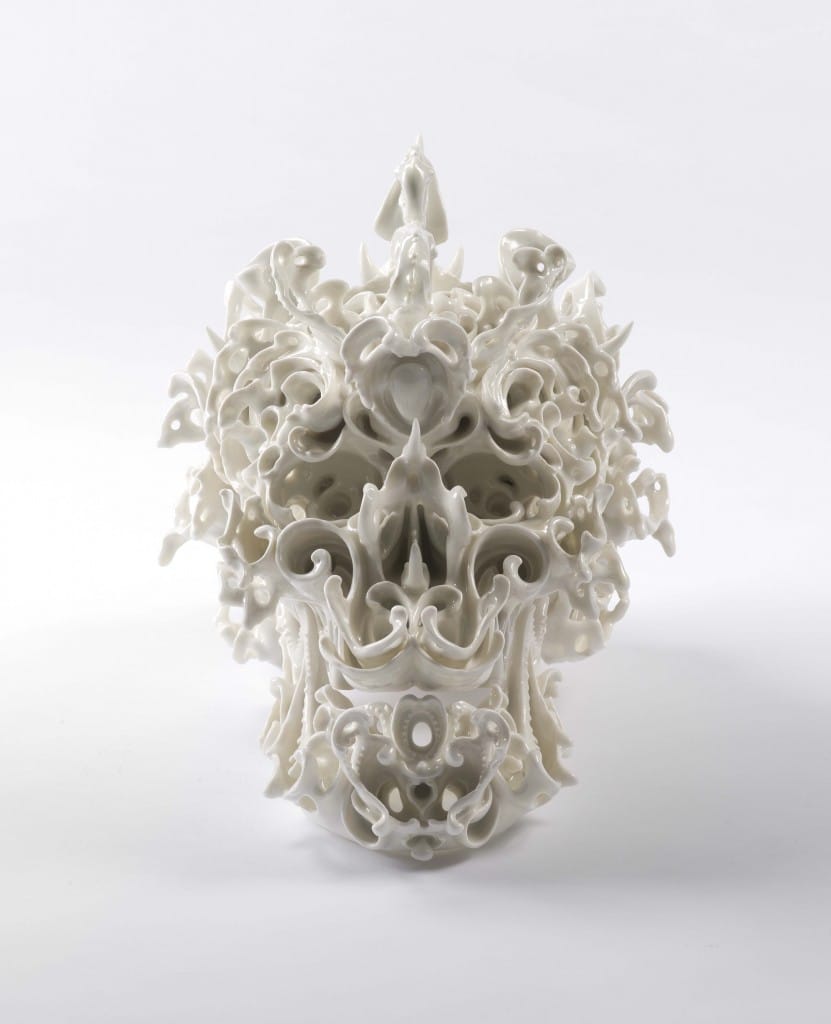 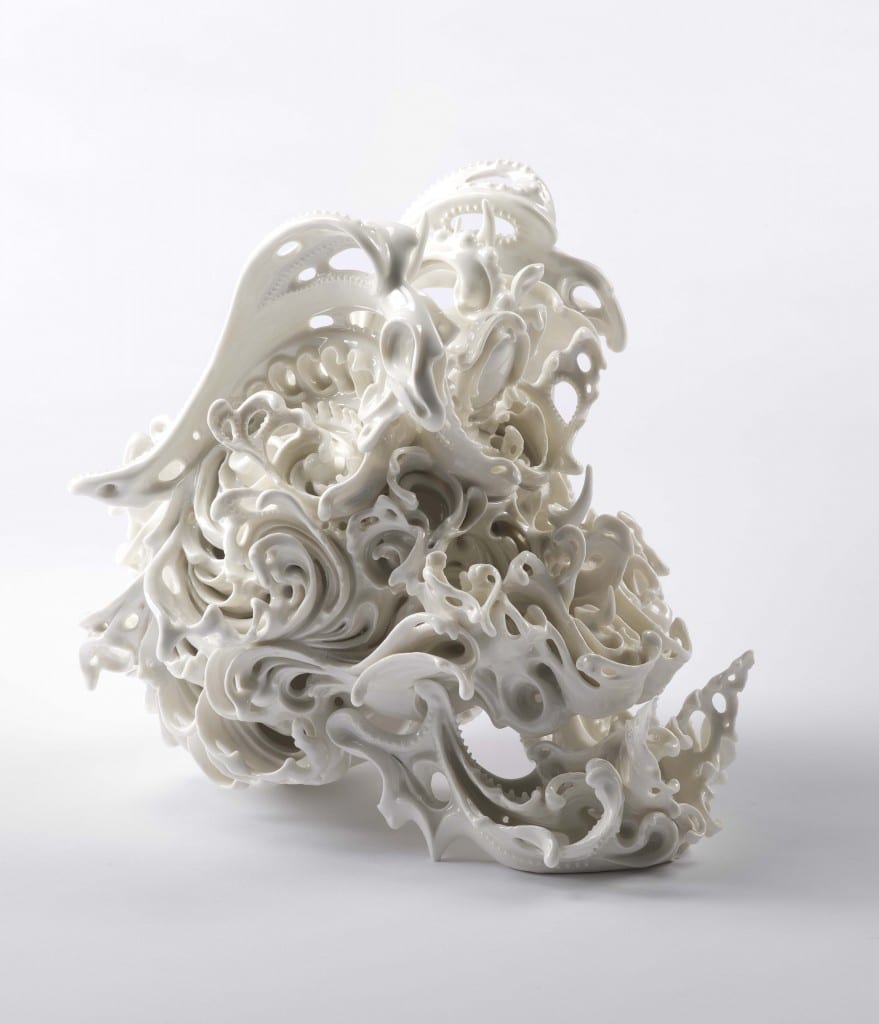 Beth Katleman, Molly Hatch and Katsuyo Aoki are three artists who come from diverse backgrounds and work in traditional materials yet create contemporary works of art that reference the historic decorative arts. Their work could not be more visually different yet they are all informed by the same theme: the Baroque. The exuberance found in their artwork counters the trend of minimalist contemporary design and looks back on a period of finely made and luxurious objets; in their hands these ideas are turned into art that is captivating and provocative, and, above all, current. Shari Mendelson’s works in recycled plastic creating vessels that reference historic glass from ancient Roman glass to Art Nouveau, like the work of the other women, take historic threads and turn them into contemporary art by both fooling the observer and challenging established notions.

Beth Katleman’s “Girls at War” (2013) is a follow-up to her monumental and critically acclaimed “Folly” (2010), a three-dimensional porcelain wallpaper. This new work examines the dark side of childhood. Precious little flower girls go to war amidst pastoral scenes and garlands of delicate porcelain flowers. “Girls at War” is simultaneously seductive and deeply unsettling.

Merrill will exhibit a chinois-inspired plate painting from Molly Hatch that was shown during London Design Week this past September. Along with this large-scale wall-mounted work, Merrill will show a garniture of silhouetted cube vases inspired by Delft, Mori, and Chinois motifs sourced from drawings and photographs in the collection of the New York Public Library. Shari Mendelson also looks to the past to inform her present. On view will be Mendelson’s sculptural hand-made plastic vessels inspired by artifacts in the collection of the Metropolitan Museum of Art.

Shown for the first time in the United States will be Katsuyo Aoki’s Predictive Dream Series Skulls no. 44 and 45. Aoki has garnered critical acclaim for her Baroque-inspired porcelain creations, most recently on view in the MFA Boston exhibition, “New Blue and White”. These new pieces are twice the size of her original porcelain skulls and are twice as intricate and twice as powerful.

Light sculptress Niamh Barry’s installation, “Falling” (2013) made of mirror polished solid bronze, opal glass and LED lights, will also make its US premiere. “Falling” is based upon the idea of a moment in suspense, the rings appear that they are falling and that in one moment they might collapse all around each other.

Additionally, the booth will feature work from several artists that are recent additions to Studio Contemporary. A lighting installation by art-world veteran Clemens Weiss, who hand writes his own prose on hand-cut glass held together by glue, as well as Six-Hand Six-Foot Gilt side-table by famed Mexican Surrealist Pedro Friedeberg and a Blackened, Gilt Steel and Bronze Double Cantilevered Console by Gary Magakis.