The Magazine ANTIQUESWhat Modern Was: Showmanship and Fantasy: The Designs of James MontJuly 2008 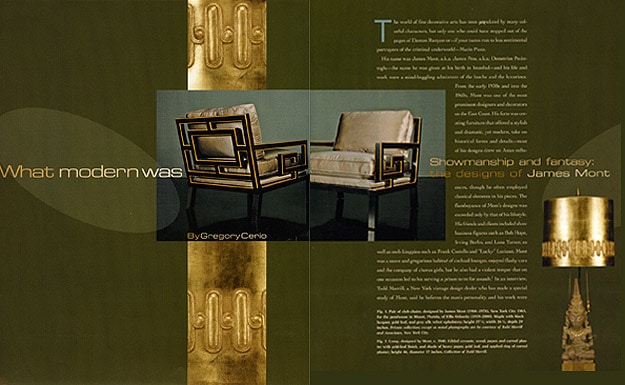 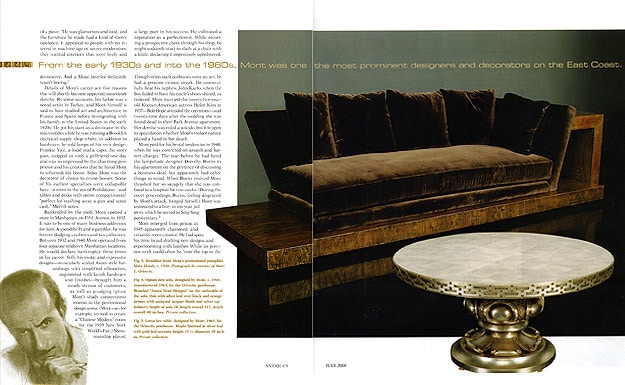 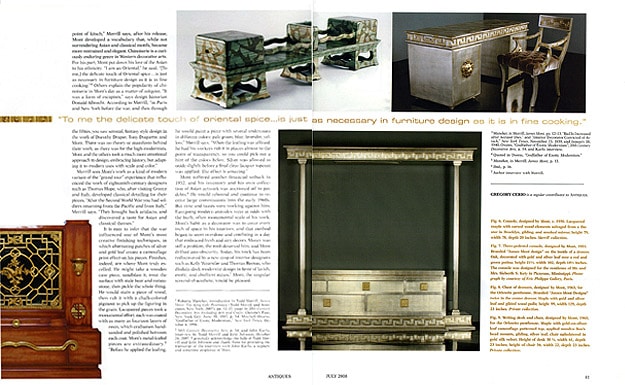 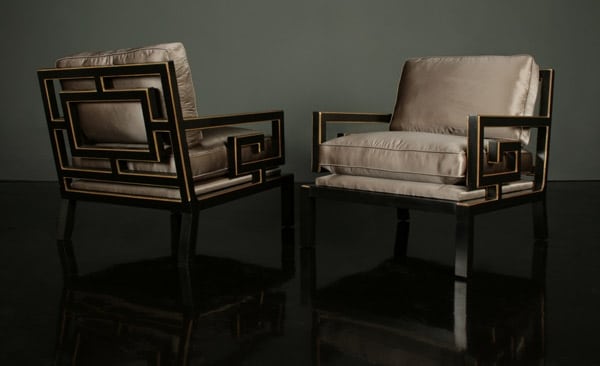 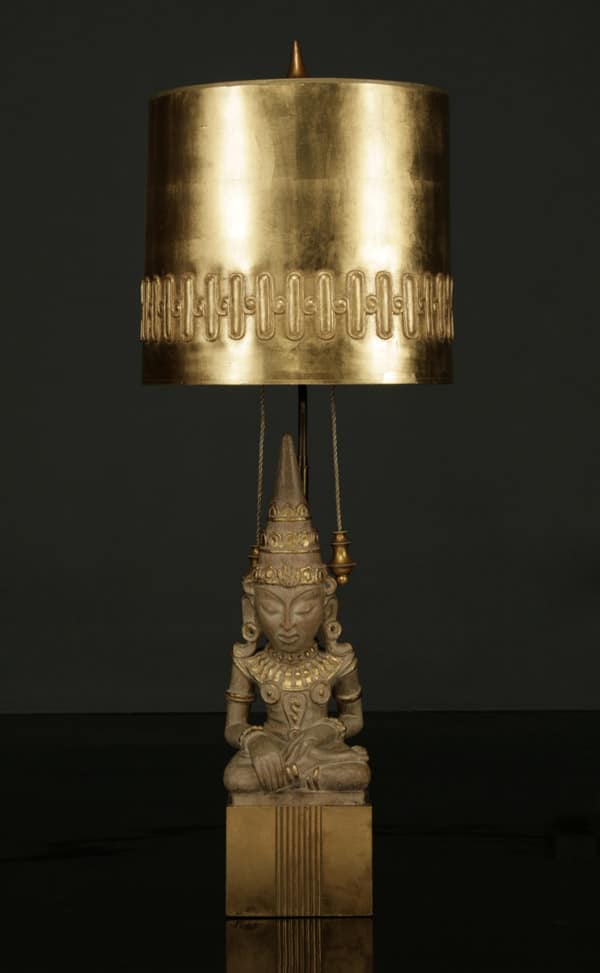 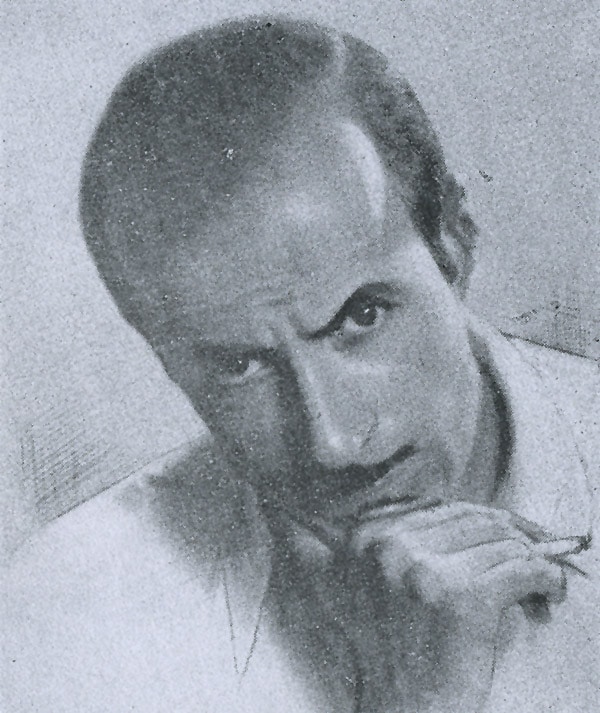 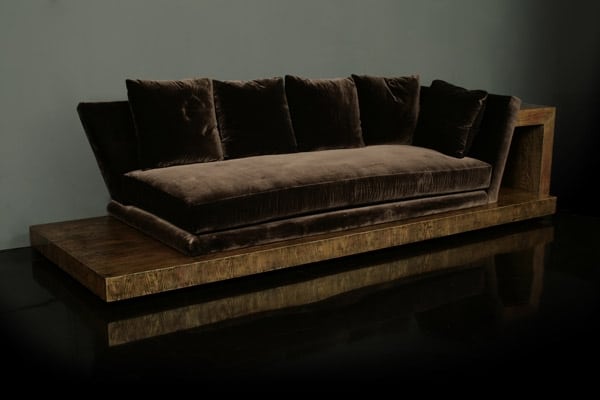 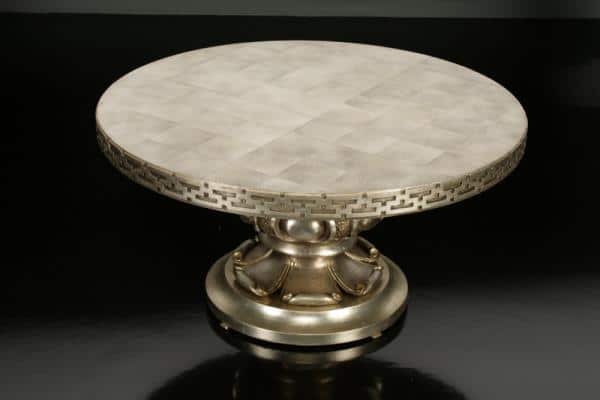 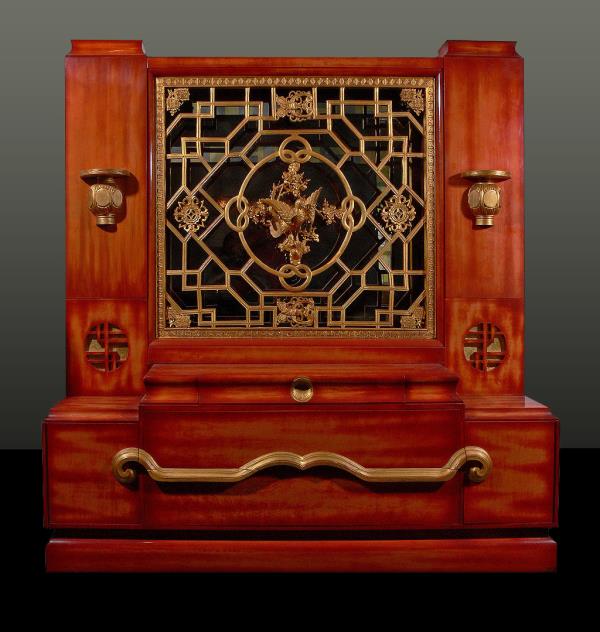 Fig. 7. Three-pedestal console, designed by Mont, 1951, Branded “James Mont design” on the inside of a drawer. Oak, decorated with gold and silver leaf over a red and green patina; height 21 1/2, width 102, depth 18 1/2 inches. The console was designed for the residence of Mr. and Mrs. Sieberth S. Kety in Picayune, Mississippi. Photograph by courtesy of Eric Philippe Gallery, Paris. 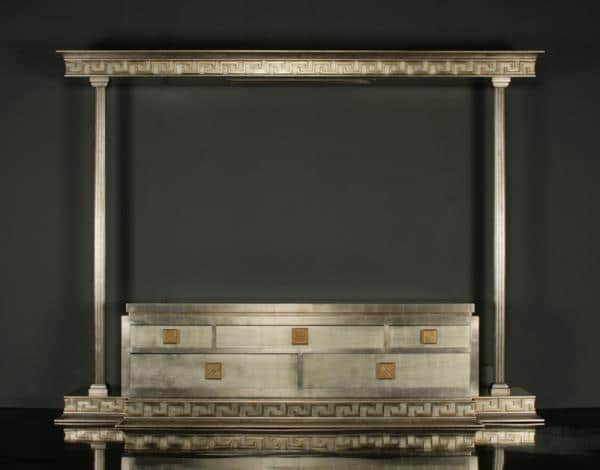 WHAT MODERN WAS
SHOWMANSHIP AND FANTASY: THE DESIGNS OF JAMES MONT

The world of fine decorative arts has been populated by many colorful characters, but only one who could have stepped out of the pages of Damon Runyon or – if your tastes run to less sentimental portrayers of the criminal underworld – Mario Puzo.

His name was James Mont, a.k.a. James Pess, a.k.a. Demetrios Pecintoglu – the name he was given at his birth in Instanbul – and his life and work were a mind-boggling admixture of the louche and the luxurious.

From the early 1930s and into the 1960s, Mont was one of the most prominent designers and decorators on the East Coast. His forte was creating furniture that offered a stylish and dramatic, yet modern, take on historical forms and details – most of his designs drew on Asian influences, though he often employed classical elements in his pieces. The flamboyance of Mont’s designs was exceeded only by that of his lifestyle. His friends and clients included show business figures such as Bob Hope, Irving Berlin, and Lana Turner, as well as mob kingpins such as Frank Costello and “Lucky” Luciano. Mont was a suave and gregarious habitue of cocktail lounges, enjoyed flashy cars and the company of chorus girls, but he also had a violent temper that on one occasion led to his serving a prison term for assault. (1) In an interview, Todd Merrill, a New York vintage design dealer who has made a special study of Mont, said he believes that man’s personality and his work were of a piece: “He was glamorous and loud, and the furniture he made had a kind of showy opulence. It appealed to people with no interest in machine age or severe modernism; they wanted interiors that were lively and decorative. And a Mont interior definitely wasn’t boring.”

Details of Mont’s career are (for reasons that will shortly become apparent) sometimes sketchy. By some accounts, his father was a noted artist in Turkey, and Mont himself is said to have studied art and architecture in France and Spain before immigrating with his family to the United States in the early 1920s. He got his start as a decorator in the mid-twenties while he was running a Brooklyn electrical supply shop where, in addition to hardware, he sold lamps of his own design. Frankie Yale, a local mafia capo, the story goes, stopped in with a girlfriend one day and was so impressed by the charming proprietor and his creations that he hired Mont to refurnish his house. Soon Mont was the decorator of choice to crime bosses. Some of his earliest specialties were collapsible bars – a must in the era of Prohibition – and tables and desks with secret compartments (2) “perfect for stashing away a gun and some cash,” Merrill notes.

Bankrolled by the mob, Mont opened a store in Manhattan, on Fifth Avenue, in 1932. It was to be one of the many business addresses for him. A spendthrift and a gambler, he was forever dodging creditors and tax collectors. Between 1932 and 1940 Mont operated from four separate midtown Manhattan locations. He would declare bankruptcy three times in his career. Still his exotic and expensive designs – muscularly scaled Asian style furnishings with simplified silhouettes, augmented with lavish hardware and finishes – brought him a steady stream of customers, as well as grudging (given Mont’s shady connections) esteem in the professional design arena. (Mont was, for example, invited to create a “Chinese Modern” room for the 1939 World’s Fair.) Showmanship played a large part in his success. He cultivated a reputation as a perfectionist. While escorting a prospective client through his shop, he might suddenly start to slash at a chair with a knife, declaring it imprecisely upholstered.

Though often such outbursts were an act, he had a genuine vicious streak. He unmercifully beat his nephew John Karfo, when the boy failed to have his uncle’s shoes shined, as ordered. Mont married the twenty-five-year-old Korean-American actress Helen Kim in 1937 – Bob Hope attended the ceremony – and twenty-nine days after the wedding she was found dead in their Park Avenue apartment. Her demise was ruled a suicide, but it is open to speculation whether Mont’s violent nature played a hand in her death.

Mont paid for his brutal tendencies in 1940, when he was convicted on assault and battery charges. The year before he had lured the lampshade designer Dorothy Burns to his apartment on the pretence of discussing a business deal, but apparently had other things in mind. When Burns resisted Mont thrashed her so savagely that she was confined to a hospital for two weeks. (During the court proceedings, Burns, feeling disgraced by Mont’s attack, hanged herself.) Mont was sentenced to a five – to ten-year jail term, which he served in Sing Sing penitentiary. (3)

Mont emerged from prison in 1945 apparently chastened, and certainly more creative. He had spent his time in jail drafting new designs and experimenting with finishes. While his previous work could often be “over the top to the point of kitsch,” Merrill says, after his release, Mont developed a vocabulary that, while not surrendering Asian and classical motifs, became more restrained and elegant. Chinoiserie is a curiously enduring genre in Western decorative arts. For his part, Mont put down his loce of the Asian to his ethnicity. “I am an Oriental,” he said. “[To me,] the delicate touch of Oriental spice…is just as necessary in furniture design as it is in fine cooking.” (4) Others explain the popularity of chinoiserie in Mont’s day as a matter of zeitgeist. “It was a form of escapism,” says design historian Donald Albrecht. According to Merrill, “in Paris and New York before the war, and then through the fifties, you saw sensual, fantasy style design in the work of Dorothy Draper; Tony Duquette, and Mont. There was no theory or manifesto behind their work, as there was for the high modernists. Mont and the others took a much more emotional approach to design, embracing history, but adapting it to modern uses with scale and color.”

Merrill sees Mont’s work as a kind of modern variant of the “grand tour” experience that influenced the work of eighteenth-century designers such as Thomas Hope, who, after visiting Greece and Italy, developed classical detailing for their pieces. “After the Second World War you had soldiers returning from the Pacific and from Italy,” Merrill says. “They brought back artifacts, and discovered a taste for Asian and classical themes.”

It is easy to infer that the war influenced one of Mont’s most creative finishing techniques, in which alternating patches of silver and gold leaf create a camouflage print effect on his pieces. Finishes, indeed, are where Mont truly excelled. He might take a wooden case piece, sandblast it, treat the surface with stale beer and rottenstone, then pickle the whole thing. He would stain a piece of wood, then rub it with a chalk-colored pigment to pick up the figuring in the grain. Lacquered pieces took a monumental effort: each was coated with as many as fourteen layers of resin, which craftsmen hand-sanded and polished between each coat, Mont’s metal-leafed pieces are extraordinary. (5) “Before he applied the leafing, he would paint a piece with several undercoats in different colors: pale green, blue, lavendar, yellow,” Merrill says. “When the leafing was affixed, he had his workers rub it in places almost to the point of transparency, so you could pick out a hint of the colors below. Silver was allowed to oxidie slightly before a final clear lacquer topcoat was applied. The effect is amazing.”

Mont suffered another financial setback in 1952, and his inventory and his own collection of Asian artwork was auctioned off to pay debts. (6) He would rebound and continue to receive large commissions into the early 1960s. But time and tastes were working against him. Easygoing modern attitudes were at odds with the burly, often monumental scale of his work. Mont’s habit in his interiors, and that method began to seem overdone and confining in a day that embraced fresh and airy decors. Money was still a problem, the mob deserted him, and Mont drifted into obscurity. Today his work has been rediscovered by a new crop of interior designers such as Kelly Wearstler and Thomas Beeton, who disdain sleek modernist design in favor of lavish, exotic, and ebullient mixes. (7) Mont, the singular scoundrel-aesthete, would be pleased.

The Magazine ANTIQUESWhat Modern Was: Showmanship and Fantasy: The Designs of James MontJuly 2008