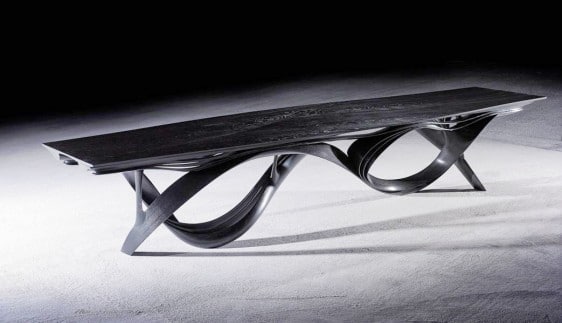 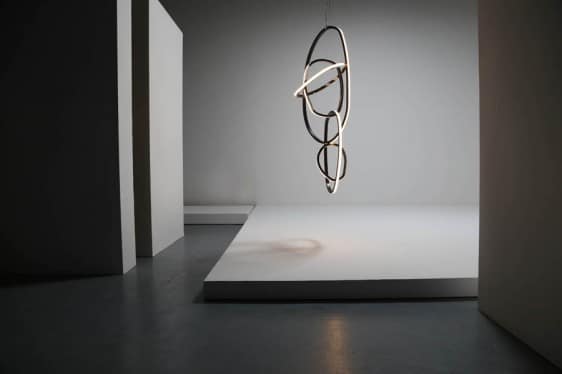 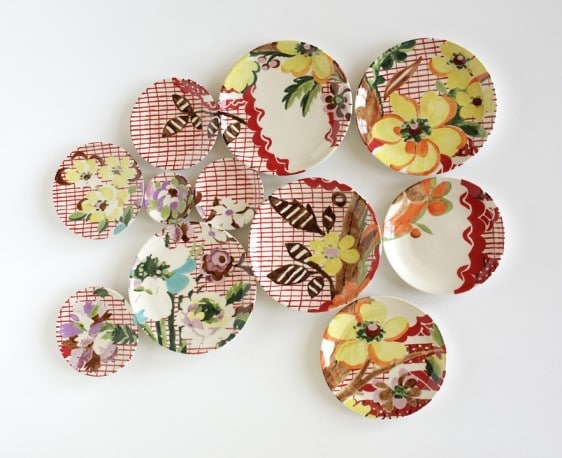 Todd Merrill Studio Contemporary is pleased to be participating in the inaugural Spring Masters, New York an international art and design fair held at the Park Avenue Armory from May 1- 4, 2014. The focus of Merrill’s booth will be three important pieces by Joseph Walsh, a porcelain triptych from Beth Katleman, and LED light sculptures by Niamh Barry. All of this work has never before been exhibited in New York.

The centerpiece of the booth will be Joseph Walsh’s Enignum XII Dining Table. This 13′ L dining table is the first table that Walsh has completed in Olive Ash with a black pigment finish. In the Enignum series, furniture virtuoso Walsh strips wood into thin layers then manipulates it to create free form compositions. The self-taught Walsh opened his studio in Co. Cork, Ireland in 1999 and has since built a reputation for himself as one of the most interesting and complex furniture-makers working today. An Enignum VI Shelf and an Enignum II Chair will accompany the dining table. Walsh’s work is in the collection of the Duke of Devonshire, Chatsworth House, England, the National Museum of Ireland, Dublin, Ireland, The Mint Museum in Charlotte, North Carolina, the Museum of Arts and Design, New York and was most recently featured in “Against the Grain: Wood in Contemporary Art, Craft, and Design” at the Museum of Arts and Design in New York, NY and “Modern Makers” at Chatsworth House, England.

Beth Katleman’s neo-rococo porcelain wall triptych “Girls at War” (2013) is a follow-up to her monumental and critically acclaimed “Folly” (2010), a three-dimensional porcelain wallpaper. Inspired by the paintings of Henry Drager, this new work examines the dark side of childhood. Precious little flower girls go to war amidst pastoral scenes and garlands of delicate porcelain flowers. “Girls at War” is simultaneously seductive and deeply unsettling. Katleman recently partook in the Faberge Big Egg Hunt, her 3’ tall egg included 600 handmade porcelain flowers, pearls, bunnies and cast flea-market treasures, realizing $20,000 for children in New York City through Studio in a School, and conservation efforts through Elephant Family, saving the endangered Asian elephant and its habitat.

Light sculptress Niamh Barry’s installation, “Shoulder” (2013) made of black patinated and mirror polished hand formed solid bronze, opal glass and LED lights, is the most recent evolution in Barry’s exploration of the relationship between light and shade, form and line in lighting design. “Shoulder” is based on observations of the human form and the dichotomy between strength and fragility. Niamh has emerged as one of the most interesting and promising sculptors working with light since Merrill exhibited her work at Design Miami/ Basel, Basel, Switzerland in June 2012.

Molly Hatch’s “Quand on Aime, Tout est Plaisir: After Fragonard” (2011) was included in the important exhibition the “New Blue and White” (February 17-July 14th 2013) at the Museum of Fine Arts Boston. Hatch is a contemporary artist who treats ceramic plates as surfaces on which she paints figural and abstract scenes inspired by the 18th and 19th century art. This particular piece was inspired by the Rococo paintings of Jean-Honore Fragonard. Exhibition curator Emily Zilber who selected the work for the “New Blue and White” explained that “Hatch uses Mishima, a Japanese slip inlay technique to create a cross-hatched image that can only be read in its entirety when viewing the whole installation. Individually, each plate provides a second frame for Hatch’s drawing. This allows for both figural and abstract representation and speaks to moments of invention inherent in the translation between the printed image and its source.” Hatch most recently completed a 22’ high, 475 plate installation for the Margaretta Taylor Lobby at the High Museum of Art in Atlanta called the “Physic Garden”.