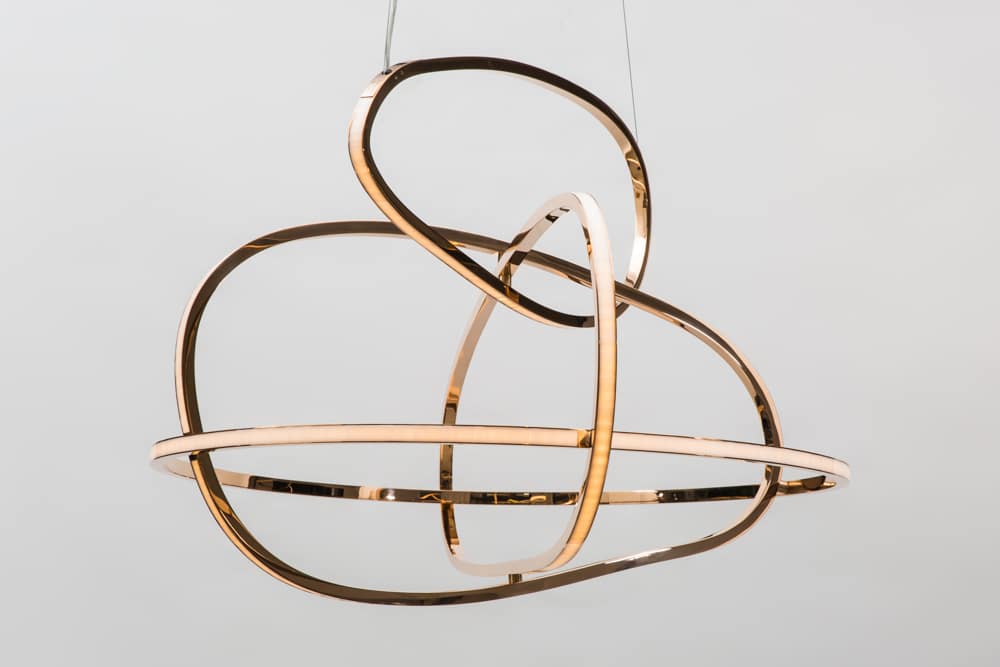 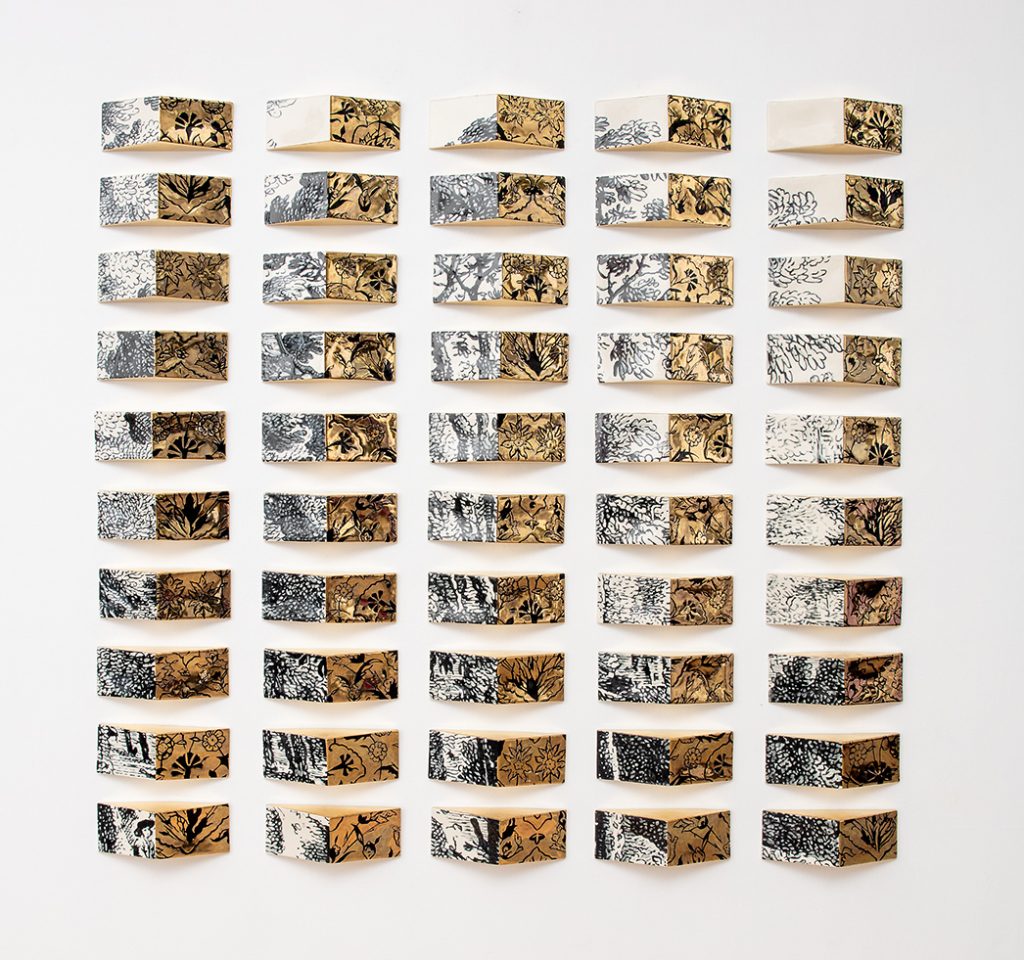 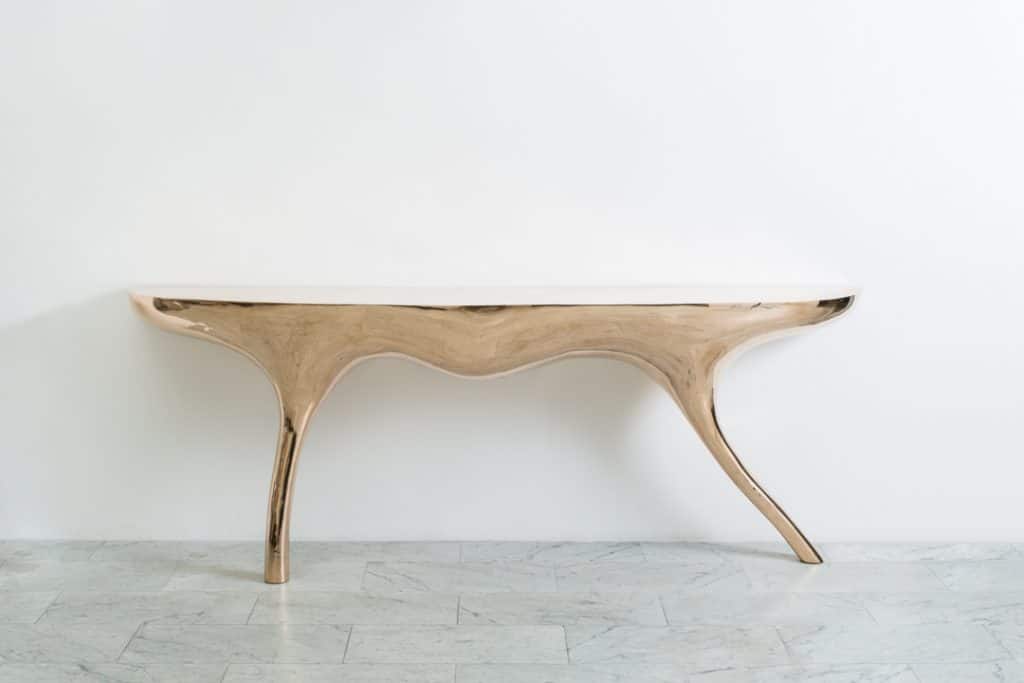 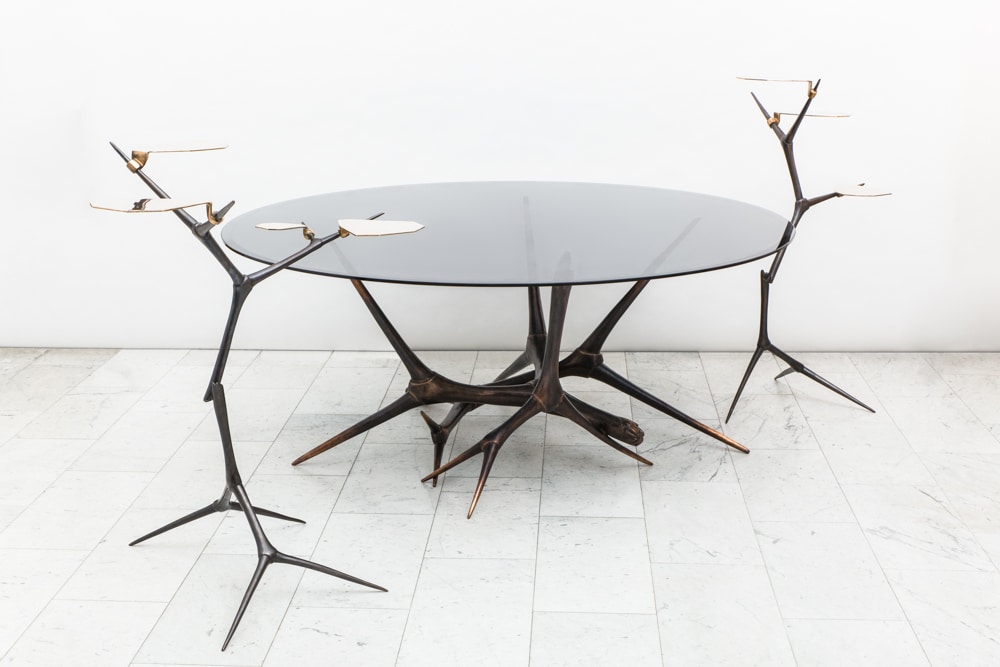 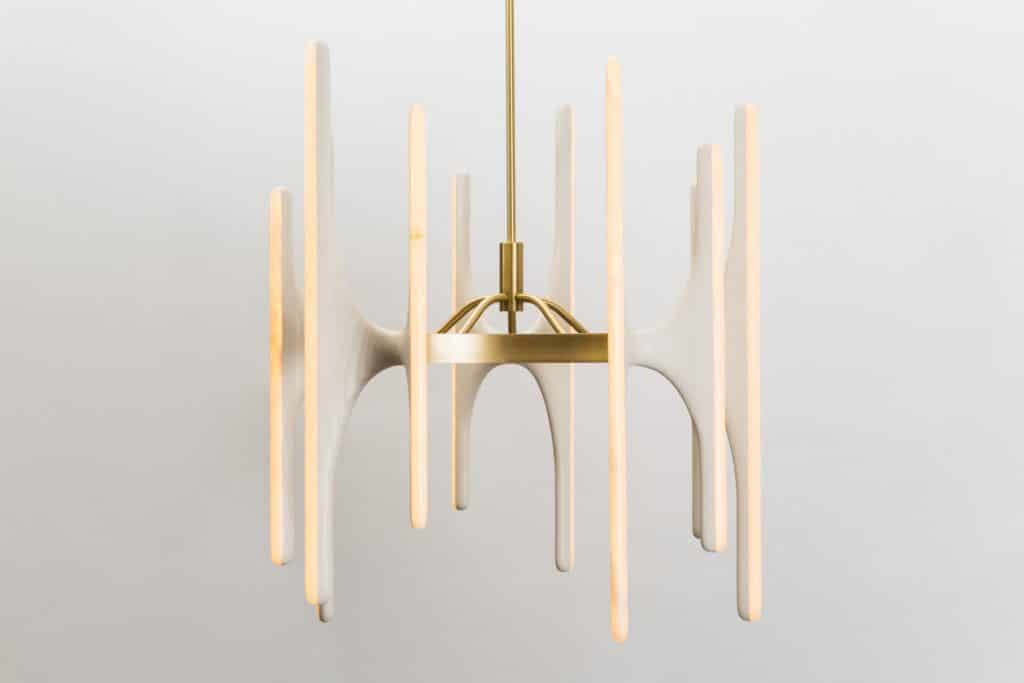 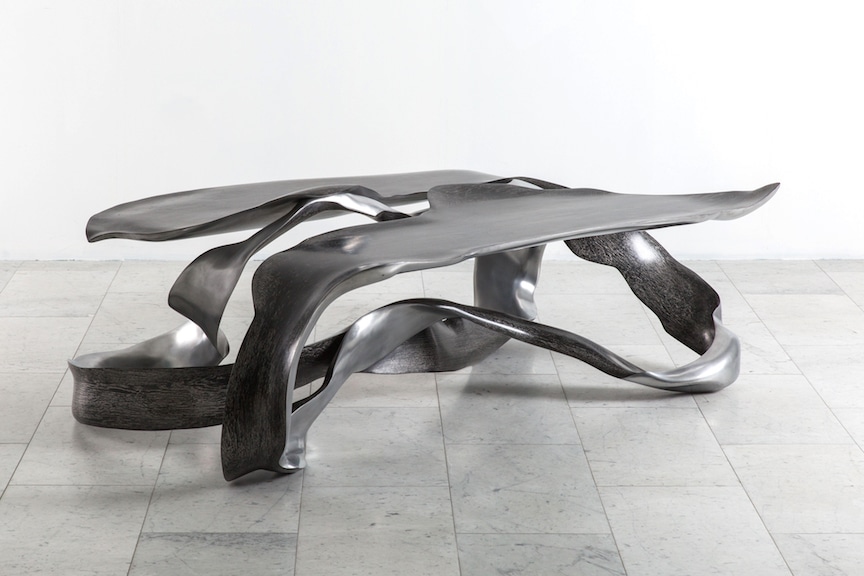 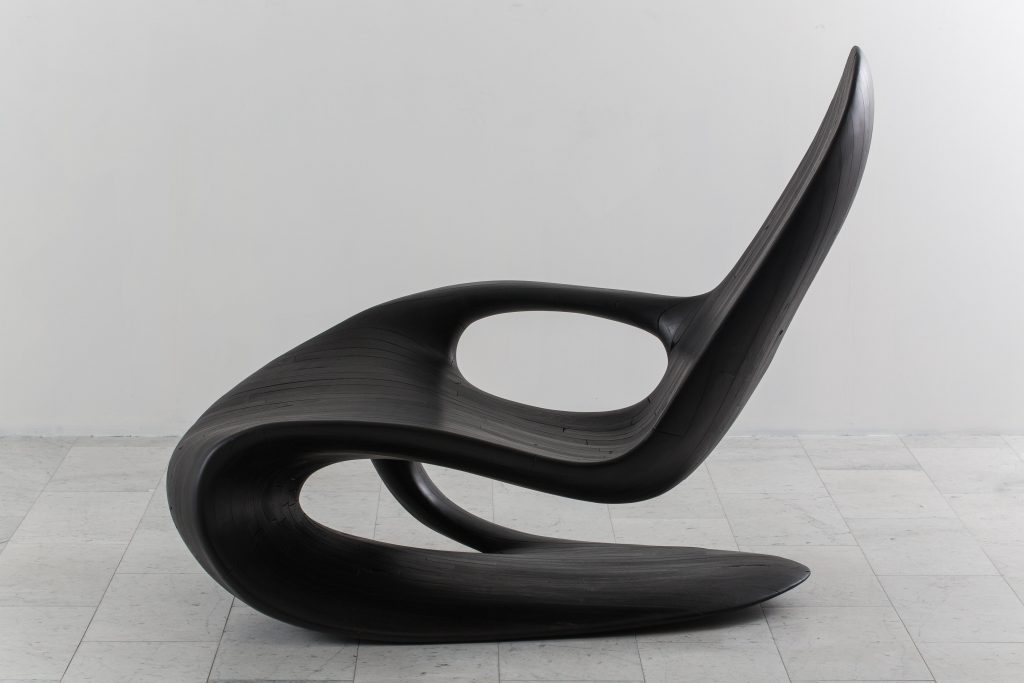 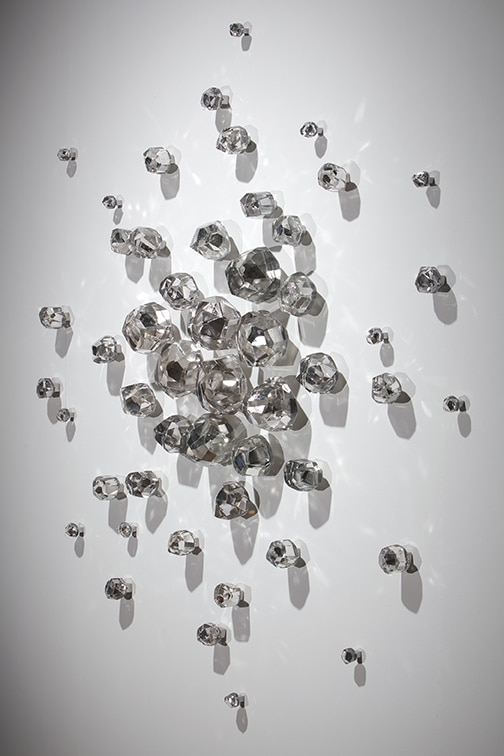 Niamh Barry newest unique work, Rising (2017), anchors the exhibition. Inspired by the movement of the human body in motion in its most abstract form, the interlocking rings of Rising are hand-formed, true bronze inlaid with opaque glass and LEDs. Soft, mirror-polished bronze surfaces are warmed by the LED line’s perennial glow. The subdued, alabaster-like glass tiles in which the LEDs are encased give an overall effect of delicacy and airiness, even as they create bold, assertive lines. The inherent paradox has earned her international renown.

Barry’s work truly defines the 21st century: its design is at once materially driven by today’s technology, while at the same time is hand-made by a studio sculptor, singular in her production of each work.

Gareth Neal’s two ebonized-oak George Low Cabinets, pay homage to historic design through new innovations in wood carving and sculpting. These unique pieces build upon the designer’s longstanding interest in referencing Georgian furniture styles as evinced, for example, in his George III, acquired by the Victoria and Albert Museum’s permanent collection in 2013. Across his repertoire, Neal combines the technical modes of 3D computer drawing and CNC processes with the intricacy of professional craftsmanship. The exterior structure of the George Low Cabinets have been meticulously chipped away to reveal an interior design that is reminiscent of eighteenth-century design.

From the left perspective an 18th century Arcadian garden landscape from George-Louis Le Rouge’s “Jardin Anglo-Chinois, Details des Nouveaux Jardins a la Mode, 1784” reveals itself across the tiles. When viewed from the right perspective, a 17th century Iznic tile pattern is revealed in brilliant gold luster.  The floral pattern was inspired by from a Turkish Tile Panel in the collection of the Metropolitan Museum of Art.  The tiles used in this panel are products of the Iznik kilns. The ceramic workshops of Iznik began producing ceramic tiles for the Ottoman court in the early part of the sixteenth century. Iznik tiles such as these still enliven the walls of mosques and palaces throughout Istanbul.

The dual composition of historic pastoral rendering and traditional pattern work echo each other in this new and exciting wall installation.

In 2013, Hatch had a solo museum exhibition at the Philadelphia Art Alliance and was included in “New Blue and White,” a contemporary decorative arts exhibition at the Museum of Fine Arts in Boston. In 2014, Physic Garden, a monumental 456-plate work, was installed at the High Museum of Art in Atlanta as well as Caughly Landscape, another installation commissioned by the Museum and the Woodruff Arts Center. Chronicle Books published Hatch’s first illustrated book of paintings in March of 2015. In 2016, the Clayarch Gimhae Museum in Korea exhibited a selection of wall installations by the artist.

Todd Merrill Studio is pleased to present the work of designer Alex Roskin. Alex Roskin’s L’éléphant Console reflects the artist’s modernist and primitivist influences. The console’s muscular sculpted shape is cast in bronze, and polished to a mirror finish. The base of the table, bowed and sinuous, fluidly extends to meet the floor. The console is designed to assume a rich patina as it ages.

Inspired by innovative designers including Richard Serra, Wendel Castle, and Constantin Brancusi, Alex Roskin’s works blend functional and artistic design. Of his own work, Roskin notes: “I try with each piece to create a stance and a presence, some with more contrapposto. I aim to give each piece a feeling that it’s inhaling or ready to make a move. I try to steer clear of the decorative, but to draw on mass, volume, line, negative space, and my love of materials and the craft of working with them.”

Charles Haupt is Cape Town based artist. His works  take their cues from Cape Town’s line blurring between urban developments and nature, industrial and organic forms. Blending sculpture and design, Haupt is always looking for the underlying geometry in the chaos that is nature.  Utilizing ancient techniques of both lost wax and sand casting, Haupt takes inspiration from nature and natural curiosities. The results yield magical, humorous, and elegant collectible works of art and design.

The dining table on view is a part of Haupt’s Num Num Series.  Num Num takes its name from the indigenous Southern African Num Num tree, which given its sharp thorns is often used as a protective hedge around homes. Two patinated and mirror polished bronze etagères will also be shown.  This will be the first time the gallery will be exhibiting Haupt’s exquisite works.

Markus Haase, who began his career doing historic restoration, embodies the independent artisan creating one of a kind works without the aid of a studio of assistants or fabricators.  Each piece has the distinct marks of the maker’s hand from his fluidly carved console tables to his celebrated light sculptures that mimic natural forms such as antlers or stalactites. Haase demonstrates his virtuosity of materials through his aptitude to imbue wood and stone, separately or together, with an almost preternatural sense of fluidity and movement.

Todd Merrill Studio features Fish’s One Piece Low Table, made from a single board, cut into nearly 600 thin veneers that have been manipulated into shape, hand-carved, and then sanded until smooth. Alongside the oak, aluminum, and natural squid-ink dye, a final addition of a silver cerused-finish highlights the wood’s grain. Also being shown is the One Piece Console, the third bronze and oak work created in the “One Piece Series”, wherein the artist explores the positive and negative space that a single piece of wood can occupy. Evocative of human forms, the piece is simultaneously a unique sculpture and a functional console with a 16-inch deep shelf. This sinuous and delicate object reveals the artist’s hand at work, while exuding a seemingly organic, unprecedented form.

A unique, material-driven sculptural chair by Ian Spencer and Cairn Young of Yard Sale Project, Black Tongue explores unprecedented forms in wood. The wood is finished using the shou-sugi-ban method, an ancient Japanese finishing technique that preserves wood by charring it with fire. In addition to being aesthetically striking and elegant, the chaise is rot, pest, weather, UV light, and fire resistant. At once inspired by and made to support the human form, the French walnut hand-carved chair evokes a sleek, curving body. The chaise’s smooth surface highlights the wood’s natural grain, reflecting light to reveal the wood’s beautiful, organic imperfections.

The use of French walnut is both aesthetic and pragmatic. Rich in color and texture, walnut is also a relatively lightweight, superbly strong, and versatile wood. The wood that composes the pictured chaise came from trees grown and harvested in Dordogne, a region in France famed for its walnut production that has persisted for centuries. These trees, harvested using a sustainable farming model, were 100-year-old farming trees that had reached the end of their working lives.

For the first time at Salon, Todd Merrill will show photography from artist Barron Claiborne.  Born and raised in Boston, Massachusetts, Claiborne is a self-taught photographer who moved to New York city in 1990 where he quickly became noticed for his evocative portraiture, most notably, his image King of New York featuring rapper Biggie Smalls wearing a plastic crown.

Claiborne’s photographic influences are often derived from his Southern and African ancestry, and he uses his work as a canvas for representing the tales and oral traditions at the roots of his heritage. For the past 3 years, Claiborne has worked on an 8×10 Polaroid project focusing on the bodies of women, saints, and goddesses.  On view will Claiborne’s seminal work (Old) Orleans Before The Deluge (Triptych) #2, USA, c. 2005 which is also in the collection of the Brooklyn Museum.

Claiborne’s work has appeared in a number of publications including Newsweek, New York Times Magazine, Rolling Stone, and Interview and have been shown and collected by museums and private collections nationally and internationally.

British – American artist, Joanna Manousis lives and works in the United States, creating sculptural objects and installations in glass and mixed media. Her work captures and animates liminal moments, revealing a world in which objects, beings and places are interconnected. Predominantly composed of glass the works induce reflection in the viewer, both physically and metaphorically. On view, Indra’s Web refers to a complex system of multifaceted jewels that was used to describe the interconnectedness of society and the universe in Hindu cosmology. Configured like a star cluster, the 50 clear crystal prisms that comprise Indra’s Web contain the negative spaces of prisms with alternating angles that have been gilded internally with silver. The prisms refract and reflect light internally from their mirrored surfaces, thus alluding to the reflective plain to induce self-awareness to our connectedness with each other.