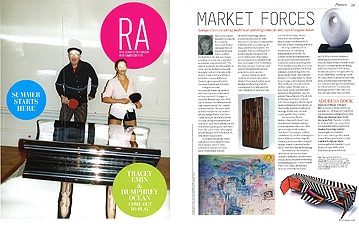 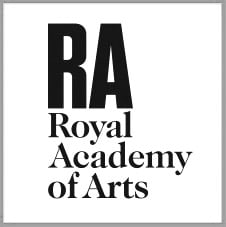 Now is the season that advertisements for London’s Grosvenor House Antiques Fair are plastered around town. And for the first time, the fair chosen a modernist sculpture, instead of an antique, to promote itself. The work is a chunky marble sculpture from 1963 by Barbara Hepworth (top right), which is for sale with dealers Hazlitt Holland-Hibbert at the fair. It was a deliberate choice to give a newer look to this most traditional of events.

Antiques fairs are increasingly featuring modern and contemporary works of art to keep pave with changes in taste and decorating styles. This can be seen in the various events that cluster around the London summer season. “We have more and more dealers in the modern art and design fields,” says Mary Claire Boyd, of the Olympia Fine Art Fair, citing as examples new exhibitor Todd Merrill from the US, who shows lighting and furniture from the 1920s to the 1980s (right) and the Belgian Erik Mullendorff, who shows 1950s silver.

At London Sculpture Week visitors can see a range of three-dimensional objects, from a fifteenth-century German ewer in the shape of a lion shown by Sam Fogg (priced at around 400,000), to early twentieth-century German works with Daniella Luxembourg, to edgy, contemporary pieces. For example, Alexia Goethe gallery is showing the young British artist Jodie Carey, who makes rococo-inspired sculptures with wax, newspaper dyed with blood, feathers, antique furniture, and casts of human bones, priced around 12,000-45,000.

Even at that other most traditional of summer events, Master Drawings London, some dealers are showing work by contemporary artists, such as Chris Hipkiss (at John Martin) and David Hockney, whose work is on sale along with that of modernist Raoul Dufy (bottom left) at Connaught Brown.

Mixing traditional with modern is an accelerating phenomenon driven by the current boom in contemporary art, by a new breed of buyer and also by decorators and designers. “A lot of today’s wealthy buyers do not come from homes which had antiques, so old things hold less meaning for them, “says interior designer Vivienne Roberts. These buyers want contemporary art for their walls and they are eclectic in their tastes. “People want a few iconic works and they don’t hesitate to blend styles,” says art adviser Tania Buckrell Pos of Arts & Management International Ltd. “I encourage my clients to put more contemporary paintings on their walls, even in a traditional interior. It’s the way the look is put together that counts.”

At Grosvenor House, Mallett director Ruchard Cave says he won’t hesitate to show a contemporary object on a fine piece of eighteenth-century furniture. For example, a silver candelabra by the British designers Edward Barber and Jay Osgerby from Mallett’s new Meta range of design, which it unveiled at the Milan furniture fair in the spring.

Nevertheless, the majority at the summer fairs remain traditional. At Grosvenor House, Richard Green is showing a charming Renoir, Two Girls with Hats from c.1890; at Olympia, around twelve Burne-Jones and William Morris-designed stained glass windows (8,000-50,000) made for the Cheadle Royal Hospital in Manchester are being offered by Haslam & Whiteway. British antiques are sought after by many celebrities, including Oprah Winfrey and ex-Gucci director Tom Ford, who blended contemporary art, custom-made pieces and antique furniture sourced in London for his flagship New York store. And you can’t get more hip than that.