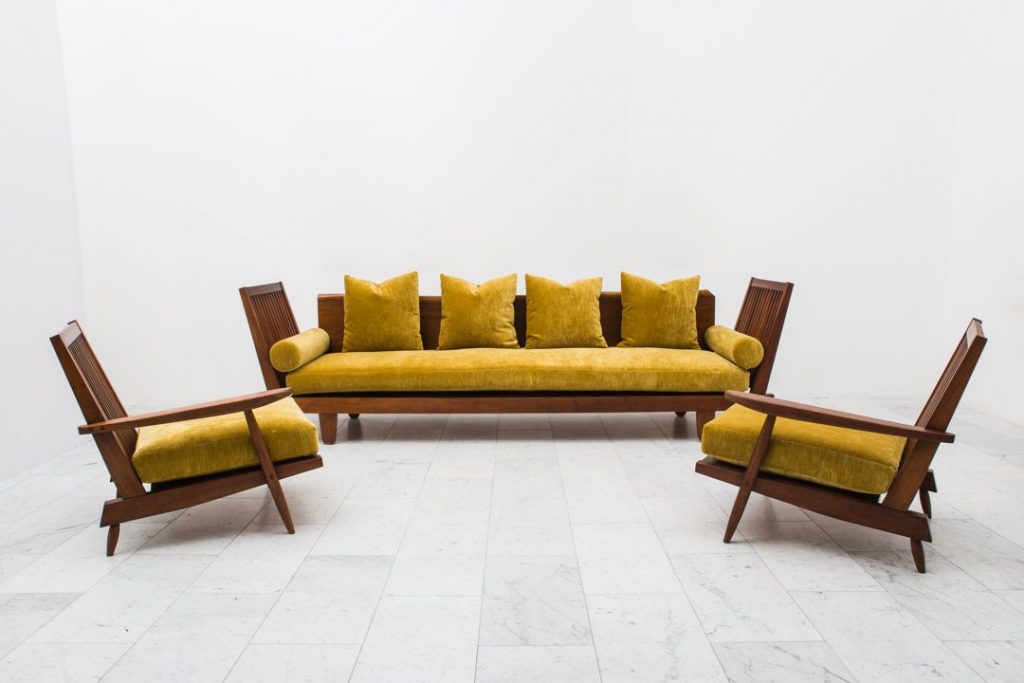 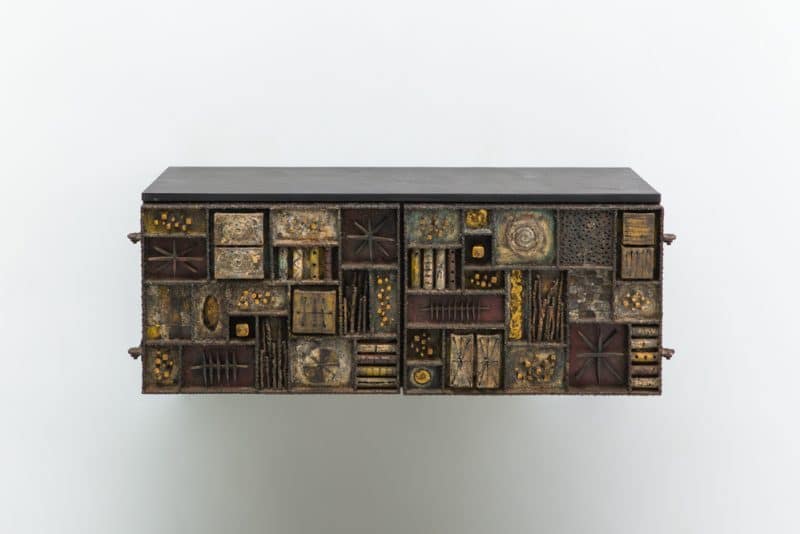 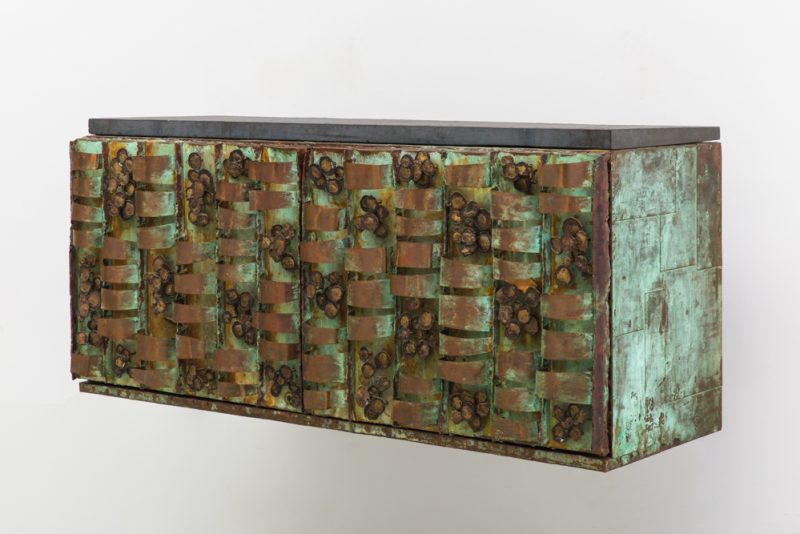 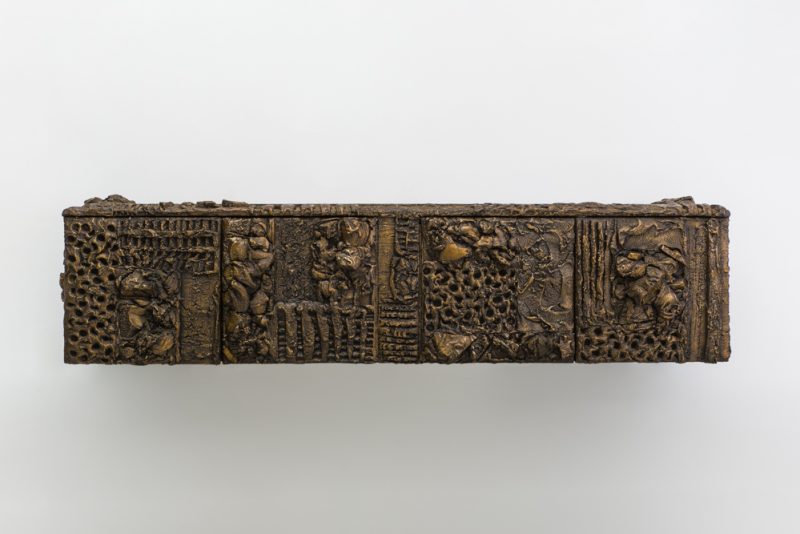 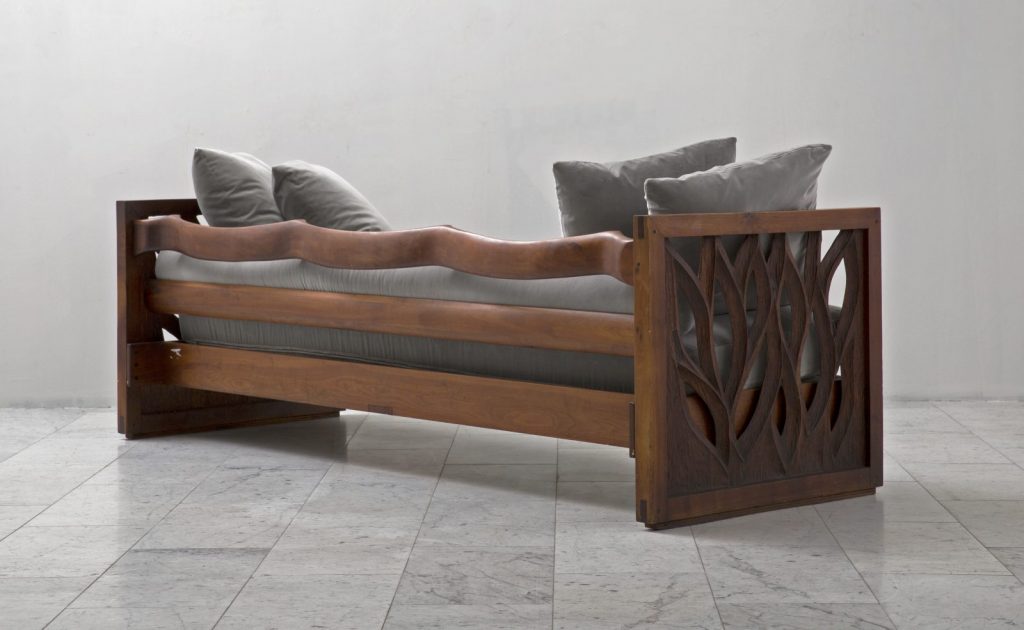 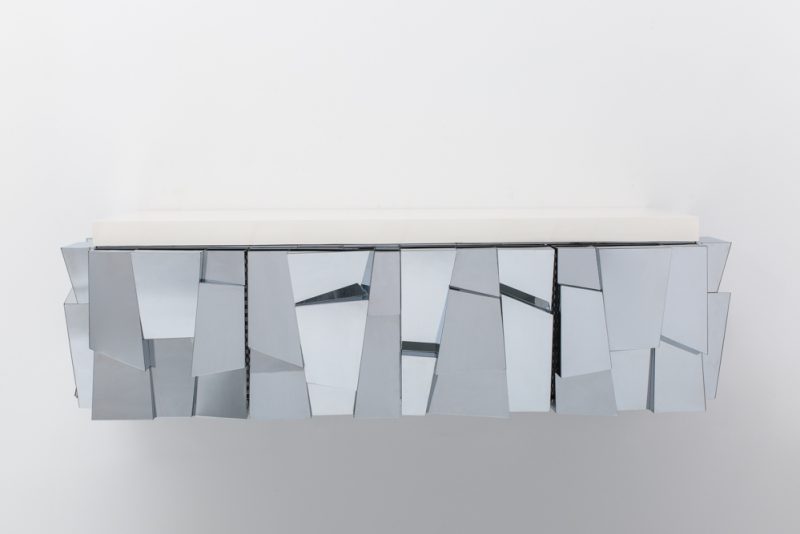 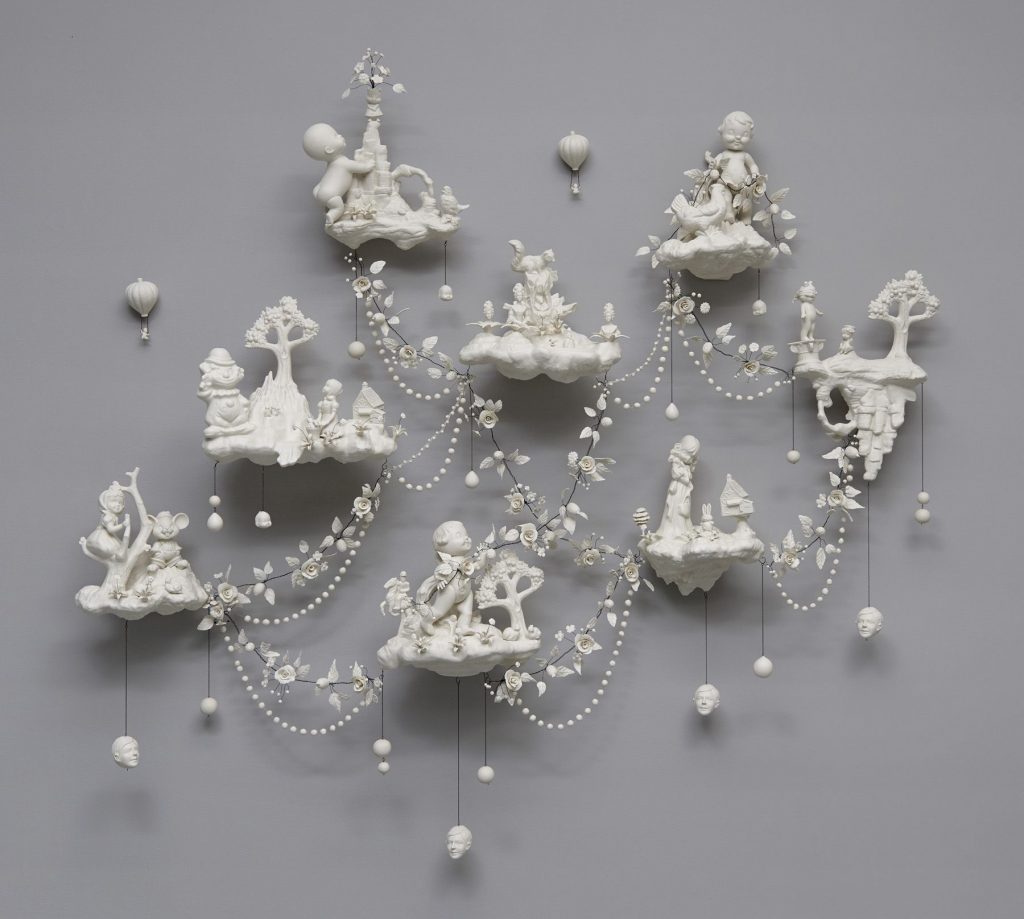 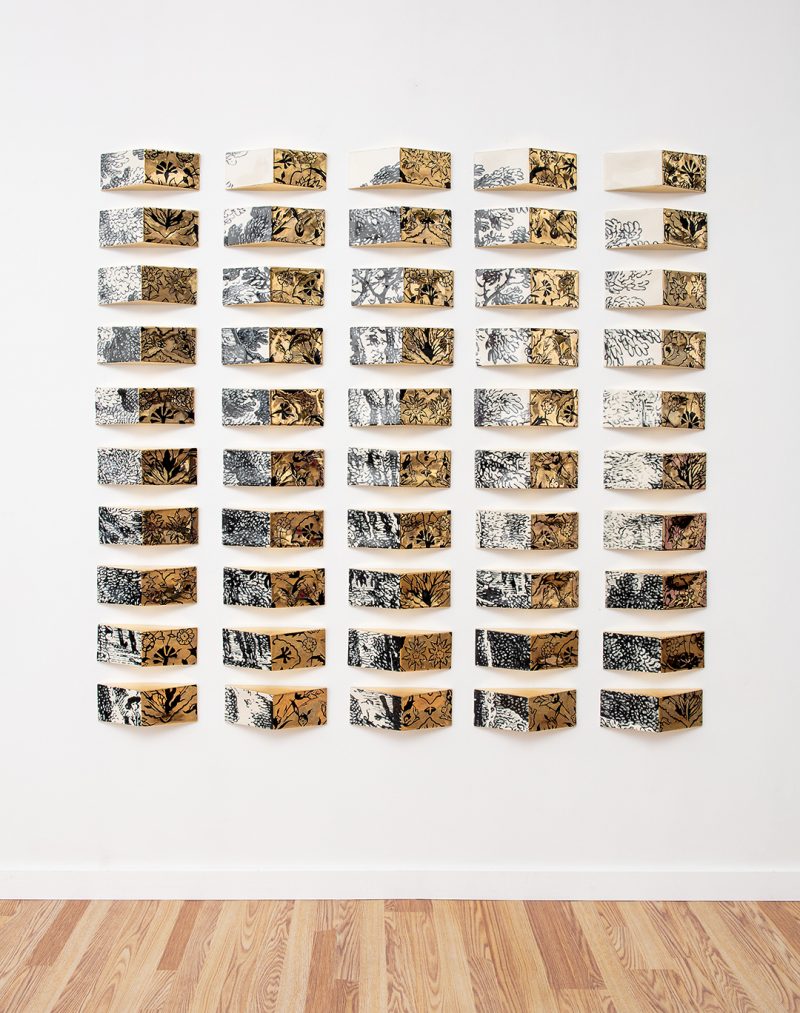 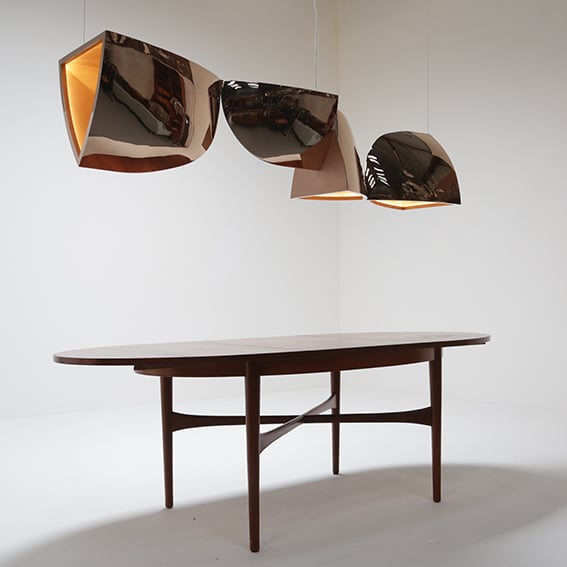 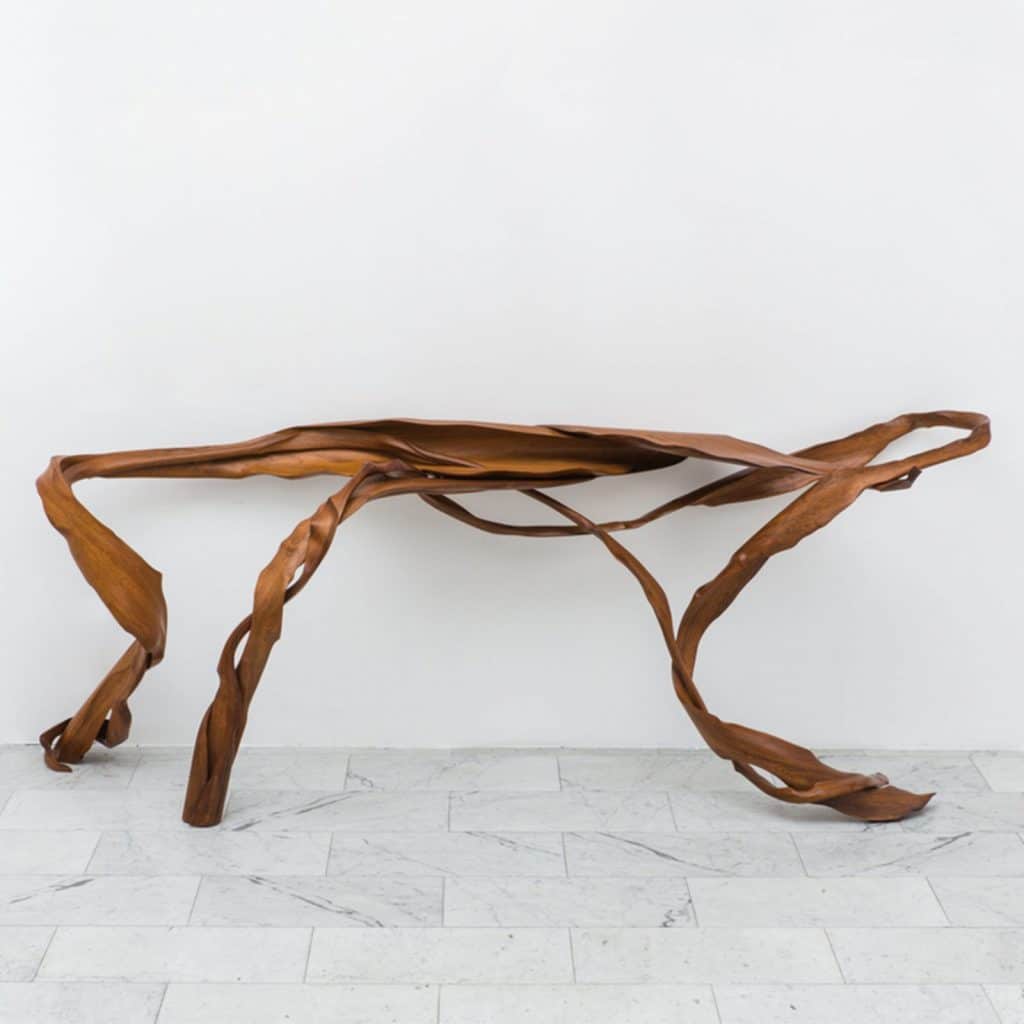 In the 1950s Paul Evans, Philip Lloyd Powell and George Nakashima all set up studios along the same mile of Aquetong Road, in New Hope, Pennsylvania creating a mecca of finely crafted wood and metal furnishings and ushering in a new era of innovative studio design on the East Coast.  Today, each of these artists has garnered a strong reputation among collectors with highly collectible pieces fetching ever increasing prices on the secondary market.

An unprecedented and previously unknown unique suite of American black walnut furniture by George Nakashima will be on view for the first time publicly.  Commissioned in 1952 by the Strong family (co-founders of Eastman Kodak), his particular suite remained in the Strong family’s Maine residence for over sixty years. As early clients of George Nakashima, the Strongs commissioned a large number of works for their homes in both Maryland and Maine over a twenty year period.  The suite is signed twice “Made by G. K. Nakashima July 1952″ (George Katsutoshi Nakashima) and comes with two letters of authentication from both Mira Nakashima and the Strong Family.

This heretofore unknown sofa form features a live-edge black walnut backrest and removable square slat-back armrests.  To date, it is the only sofa known to include both the live-edge, single-board back and two arms.   As there were no existing drawings for this design in the Nakashima archive, the form was “rediscovered” with the uncovering of the Strong’s commission. The overall proportion shows the dual influence of both modern design and Nakashima’s Japanese heritage.  According to Mira Nakashima, the chairs are perhaps the first of their forms to be made.  This entire suite of works will be held exclusively for Design Miami.  Other Nakashima Studio pieces include a Minguren low table and a Keisho standing sculpture by George Nakashima’s daughter Mira Nakashima.

The celebrated metal work of Paul Evans will be on display through a selection of unique works ranging from seating, consoles, low tables and lighting – each highlighting specific milestone career styles – from his early iconic pictographic Sculpture Front pieces, Verdigris Copper Loop pieces, the Sculpted Bronze series and finally, his Cityscape and Faceted pieces.  Cantilevered from the wall, the hanging consoles will be installed in a stair step form ascending up the wall.  Showcasing Paul Evan’s mastery across various styles of metal work, these pieces will reflect the ingenuity and artistic freedoms he became known for.

Also on view will be a dynamically hand-sculpted, wall-mounted Paul Evans Disc Bar, which was arguably the most iconic of his designs. Closed, the piece is a sensational sculpture.  Opened, the two doors reveal a wall-mounted case and bar with a red striated interior,  two sculpted bronze cabinets, and a drawer. The entire piece is finished in an atomized bronze with a carbon patina. This technique, developed by the Evans Studio, is known as Sculpted Bronze and is the basis for Evan’s Directional series of the same name.  An important Sculpted Bronze Console will also be on view.

The evolution of Evans’  Cityscape works can be seen in two rare Faceted cabinets, one a hanging console and the other, a two door cabinet.  The Faceted Series, like the Cityscape Series is comprised of chrome plated steel, however, the individual surfaces are angled in, what Directional advertised as a “play of depth and dimension.”  These rare pieces defy convention, making them timeless and collectible.

A pair of button tufted, case settees elegantly demonstrate Evans’ Patchwork Series – simple cubed forms faced in a collage of bronze, copper and pewter that are at once structured and expressive.

Other original pieces include a Unique Sculpted Walnut Three-Seat Sofa by Philip Lloyd Powell. Early examples of Powell’s works are increasingly rare. This rare, one-of-a-kind, three-seat walnut sofa is a prime example of Philip Lloyd Powell’s sensitivity towards wood and talent for carpentry and construction. The hand carved backrest defines each seat with proportions meant to optimize comfort and sturdiness.

Complementing the presentation of 20th Century Design will be an intimate selection of contemporary, material-driven, studio works from artists Beth Katleman, Niamh Barry, Marc Fish, Molly Hatch and John Procario.  Each of the five contemporary artists are  creating unique works specifically for the exhibition with the shared theme of Historical Inspiration and Modern Innovation.

A new Rococo-inspired porcelain wall installation titled Arcadia by Beth Katleman will make its debut at Design Miami. Her ornate porcelain installations examine themes of consumption and desire. Creamy, dreamy porcelain landscapes are surprisingly populated by kitschy figures cast from the artist’s own collection of flea market trinkets and toys. As Katleman explains: “Porcelain suggests luxury, refinement and royal provenance. While one flea market treasure seems a little sad, a florid profusion of them is cause for celebration.” In her work, Katleman blurs the boundaries between high and low art, quoting from literature and traditional design while adding a contemporary narrative that is all her own.

Beth Katleman’s work is featured in private and public collections worldwide, including the M.H. de Young Museum in San Francisco, CA; the Arario Museum in Seoul, South Korea; the John Michael Kohler Arts Center in Sheboygan, WI; and the Nike, Inc. Collection in Portland, OR.  Additionally, her sculptures are mounted in the Hong Kong and London flagship stores of Christian Dior and  have been featured in the famous window displays of the Barneys New York flagship store.

John Procario will be making his Design Miami debut with Standing Freeform. Continuing the Freeform Series’ exploration of streamlined, undulating forms, the serpentine sculpture, gracefully descends from the wall as the form splits into ribbons exposing the glow of  internally embedded LEDs.

Having grown up around his carpenter father’s workshop, Procario brings his love of woodworking to the world of design. After studying sculpture in graduate school, Procario developed a unique aesthetic that influences his sculptural furniture and lighting. This aesthetic began with the idea of wood as metaphor for the human body. Just like bone or muscle, wood will bend comfortably to a point, then snap. Procario pushes the limit of breakage to create a sense of strain in the otherwise fluid gestures of his wooden works. Conceptually, this allows beauty to be the product of stress. The outcome is an organic, fluid design balanced with a sense of motion.

From the left perspective, an 18th century Arcadian garden landscape from George-Louis Le Rouge’s “Jardin Anglo-Chinois, Details des Nouveaux Jardins a la Mode, 1784” reveals itself across the tiles. When viewed from the right perspective, a 17th century Iznic tile pattern is revealed in brilliant gold luster.  The floral pattern was inspired by a Turkish Tile Panel in the collection of the Metropolitan Museum of Art.  The tiles used in this panel are products of the Iznik kilns. The ceramic workshops of Iznik began producing ceramic tiles for the Ottoman court in the early part of the 16th century. Iznik tiles such as these still enliven the walls of mosques and palaces throughout Istanbul.

The dual composition of historic pastoral rendering and traditional pattern work echo each other in this new and exciting wall installation.

In 2013, Hatch had a solo museum exhibition at the Philadelphia Art Alliance and was included in “New Blue and White,” a contemporary decorative arts exhibition at the Museum of Fine Arts in Boston. In 2014, Physic Garden, a monumental 456-plate work, was installed at the High Museum of Art in Atlanta as well as Caughly Landscape, another installation commissioned by the Museum and the Woodruff Arts Center. Chronicle Books published Hatch’s first illustrated book of paintings in March of 2015. In 2016, the Clayarch Gimhae Museum in Korea exhibited a selection of wall installations by the artist.

Marc Fish’s handmade, unique Laminaria Console is created from nearly 400 pieces of American black walnut “veneer.” The ribbon like delicacy of the work belies the console’s structural integrity.  By using an uncommon method of bending the wood that does not rely on heat, water or steam, the strength of the walnut is preseved. A structual marvel, the console showcases Fish’s virtuosity of art furniture.

Fish’s incredible mastery of today’s most refined practices in micro stack-lamination formed the genesis of the Laminaria Series. Manipulated into winding, layered shapes, each work has been pieced together, hand-carved, sanded, polished, and finished with oil and wax. Stimulated by marine life, this series takes inspiration from twisted seaweed forms, as its title, Laminaria, a genus of seaweed, suggests.  The sinuous and delicate forms reveal the artist’s hand at work while embodying a seemingly organic structure.

Niamh Barry will debut a new work titled Vesselscape created specifically for the exhibition. Composed of Barry’s signature hand-formed bronze vessels, the glamorous suspended sculpture will float like a three dimensional drawing. Vesselscape take inspiration from the Iron Age, specifically the Broighter Boat.  The Broighter Boat is part of a hoard of gold artifacts from the first century BC that were found in 1896 by Tom Nicholl and James Morrow on farmland near Limavady, in the north of Ireland.  The hoard is considered an important find. The National Museum of Ireland believes that the collar is the “finest example of Irish La Tène goldworking” in Europe.

In 2017 Barry was commissioned by the Central Bank of Ireland to create a monumental work referencing the Broighter Boat and its historical importance.  Vesselscape  with its hand-formed bronze vessels that emit a warm glow from hidden LEDs  is the first work of its kind made available to the public.

Since the beginning of her artistic career with Todd Merrill Studio in 2012, Barry has risen to prominence in the art and design world, becoming one of the most sought-after figures working in LED light sculptures today. Barry was profiled in Architectural Digest and Galerie Magazine. Most recently Barry was selected by the National Museum of Ireland to create a monumental commission that will be part of the museum’s permanent collection.  A survey exhibition of her work will be mounted at the museum in 2018.