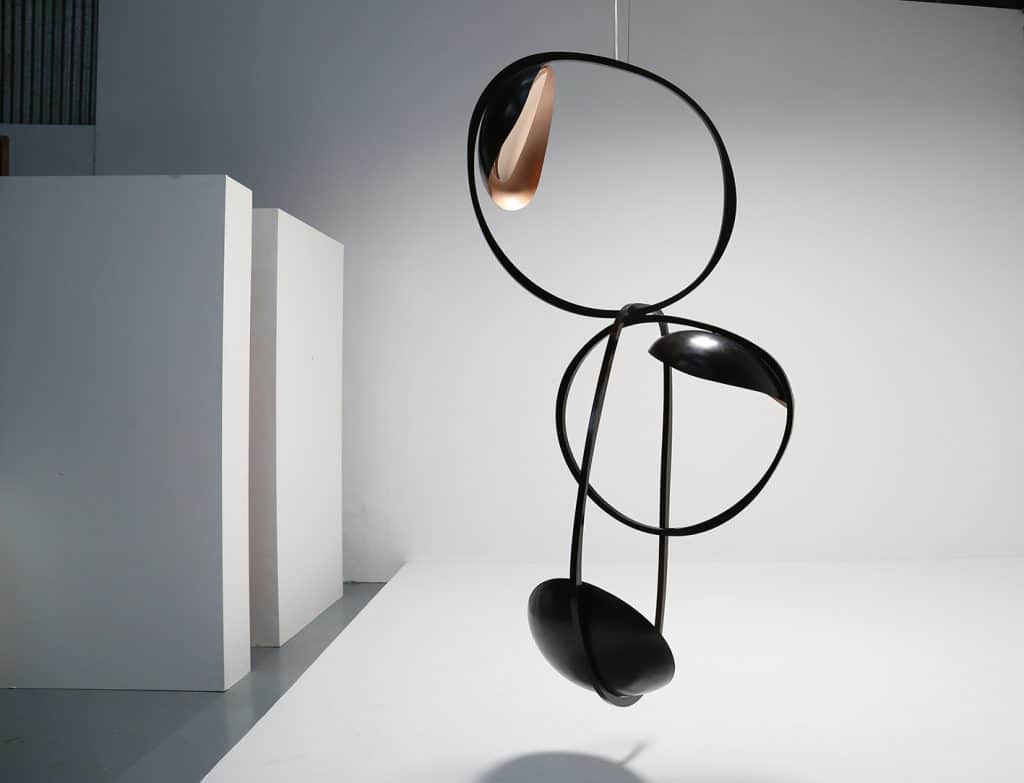 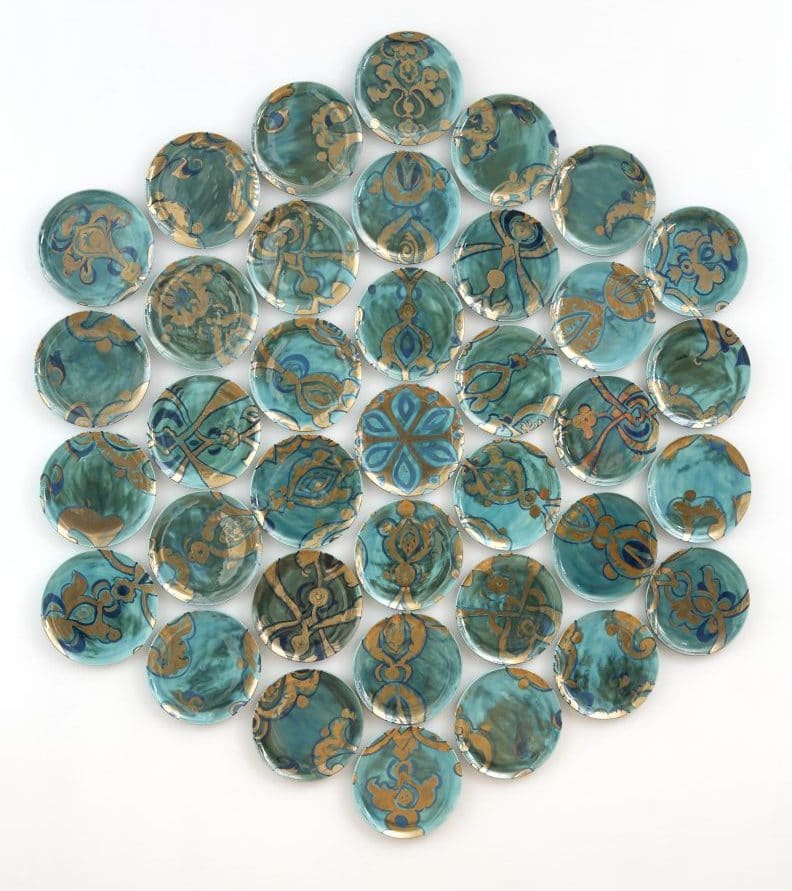 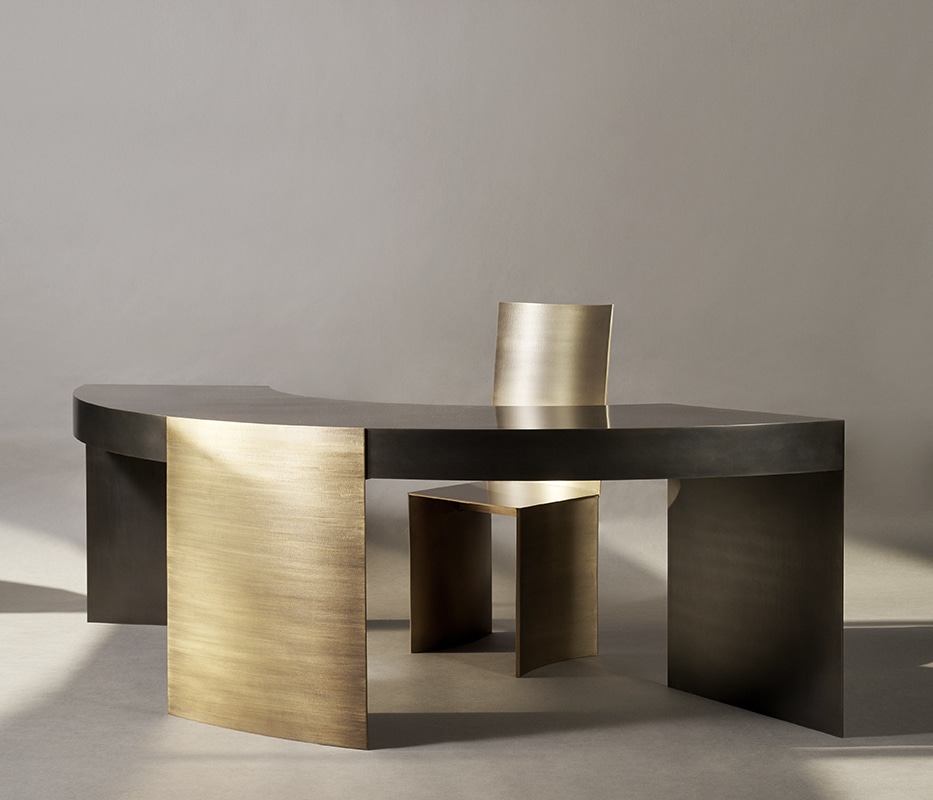 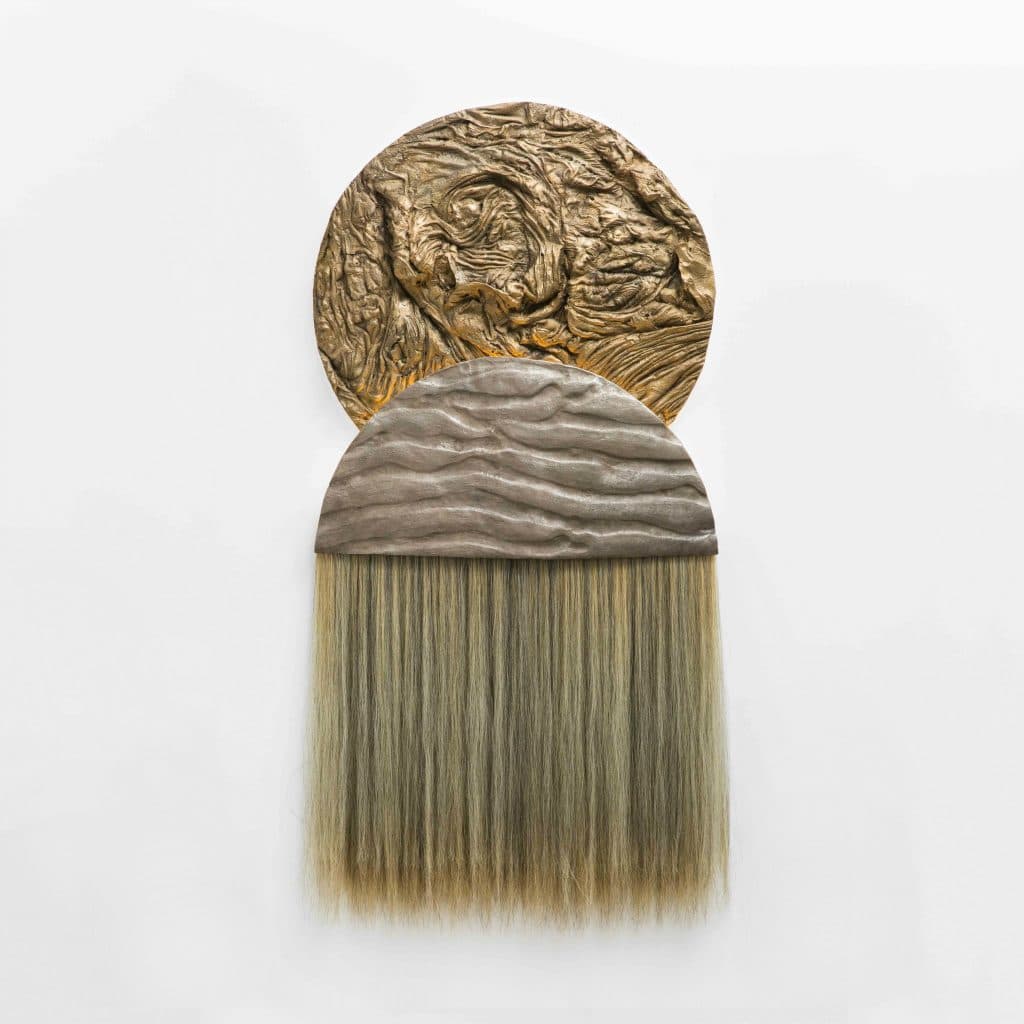 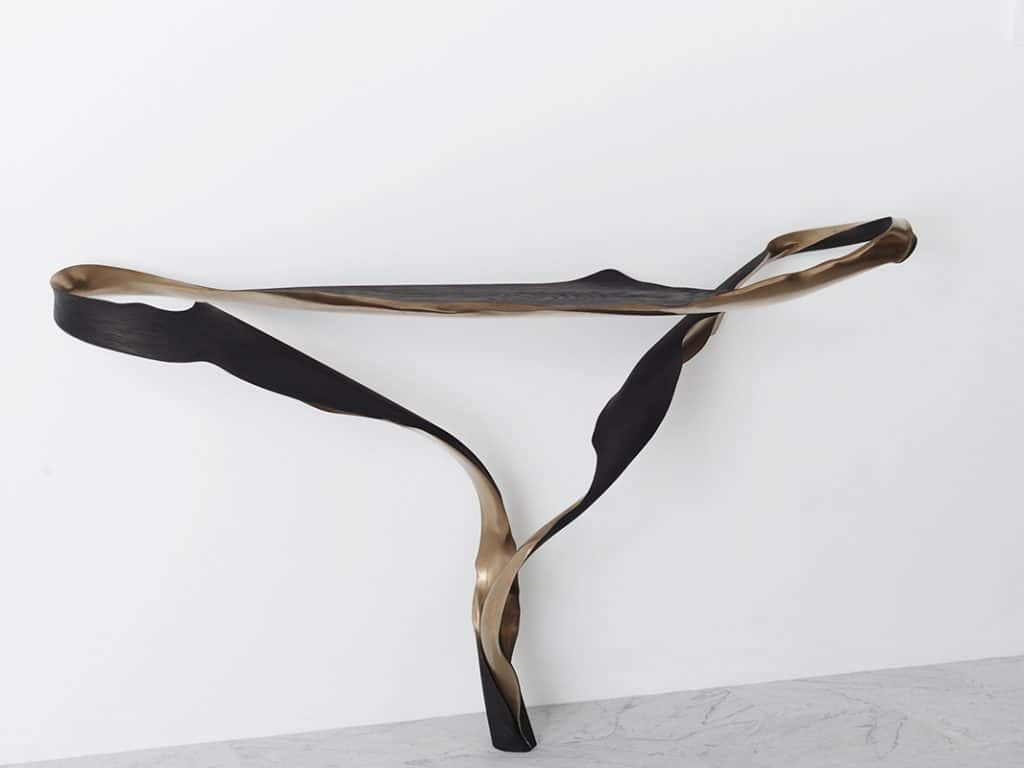 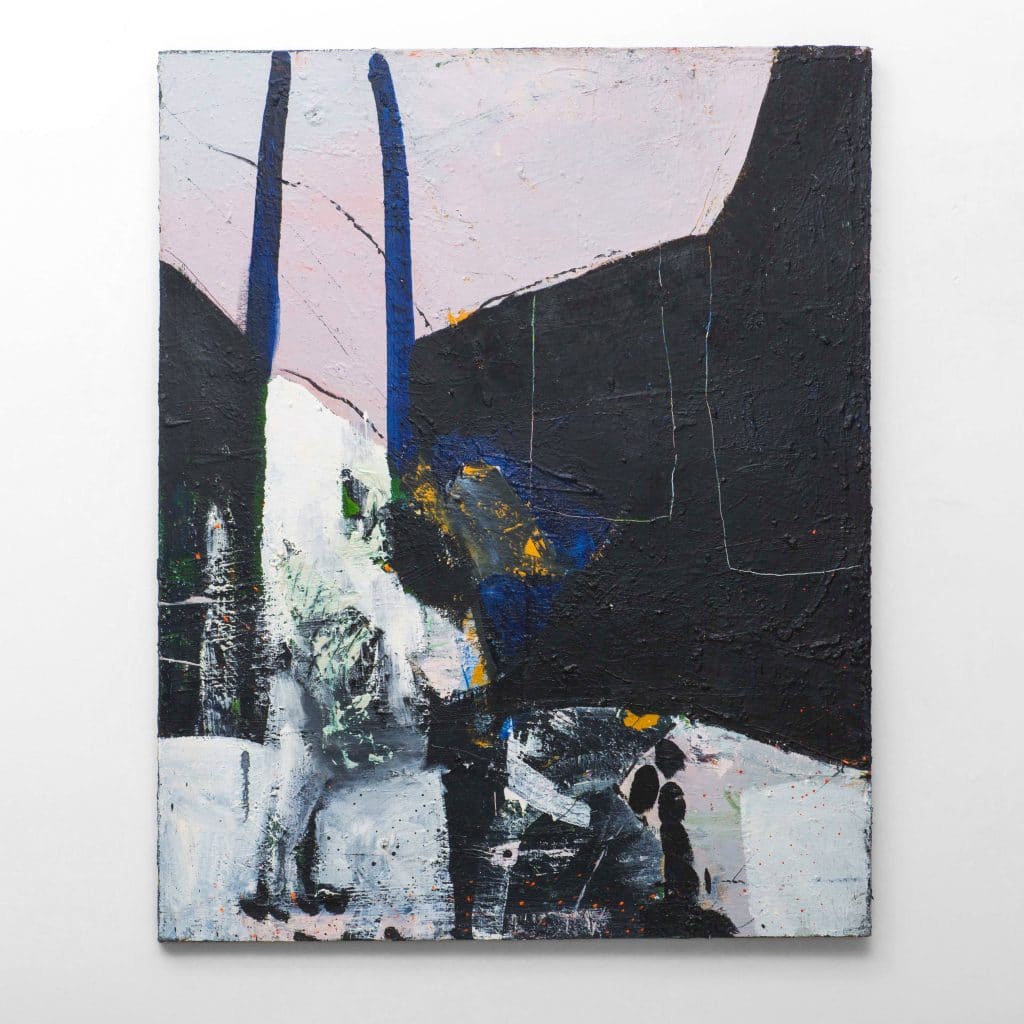 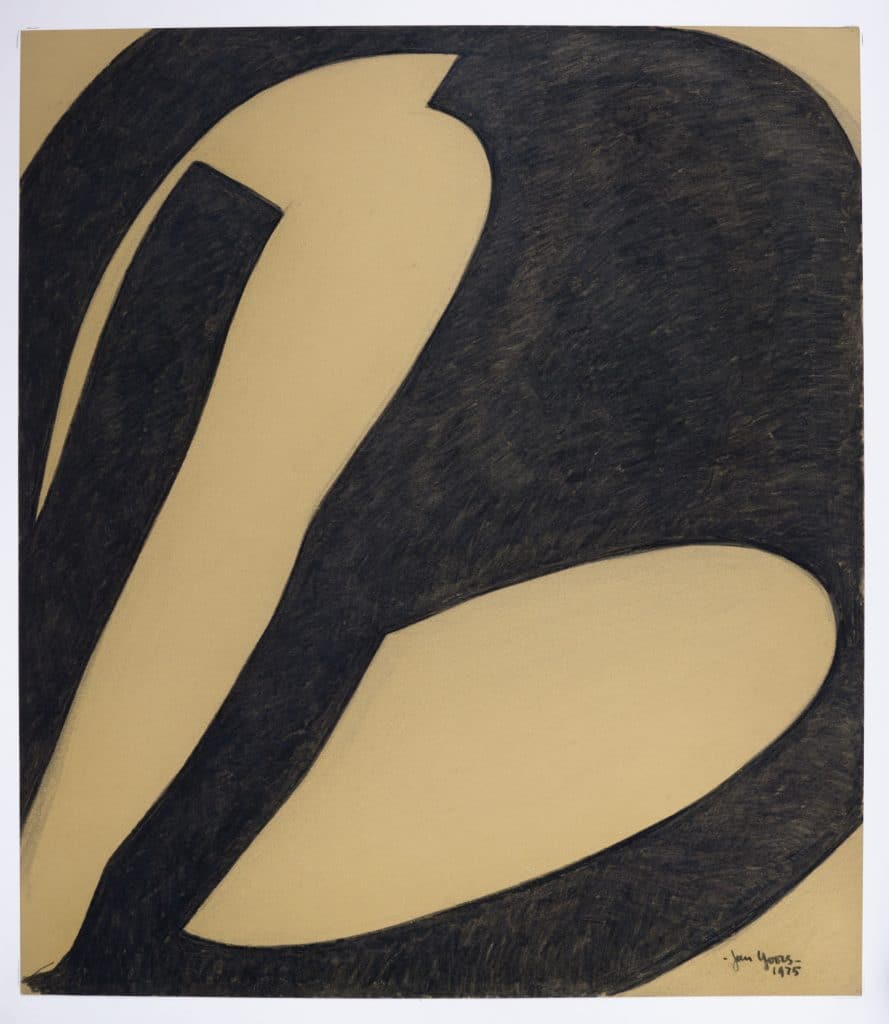 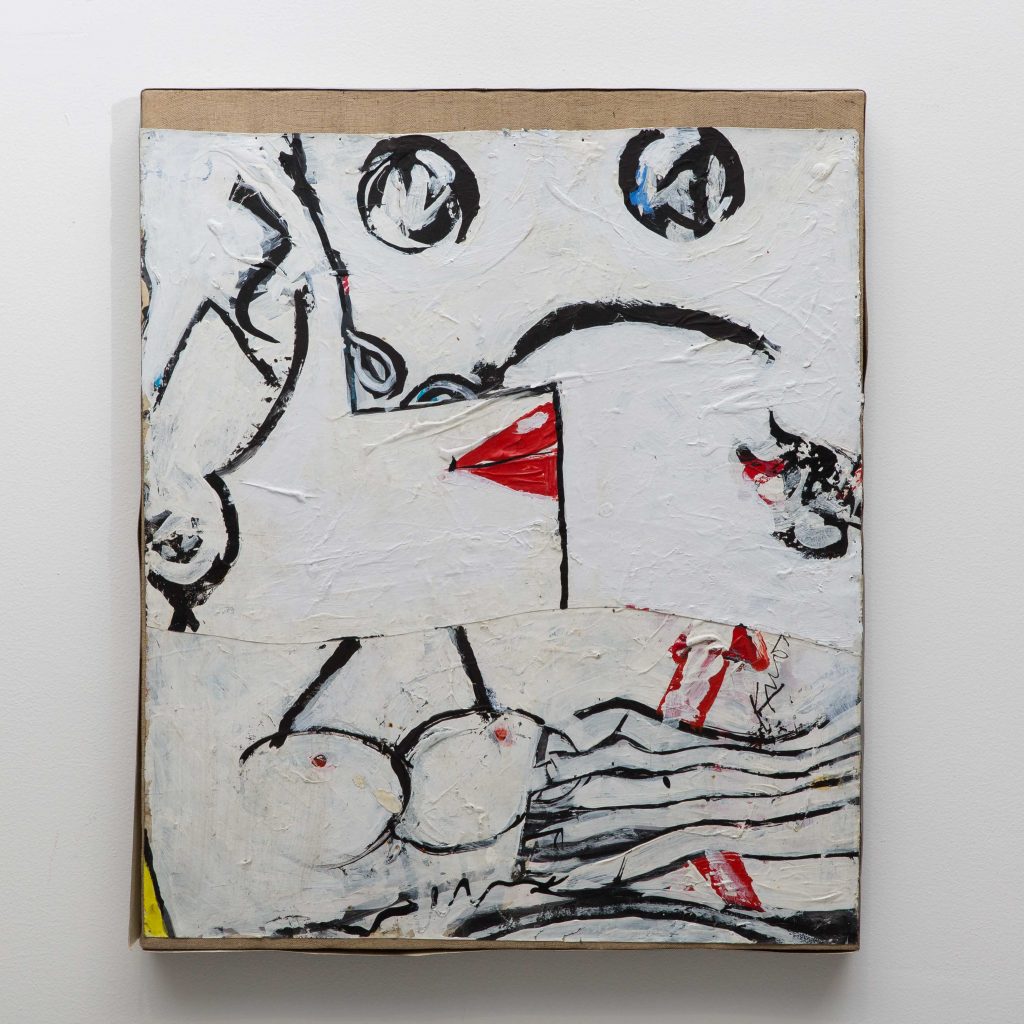 Palm Beach, FL—Todd Merrill Studio is pleased to present an expansive exhibition at the Palm Beach Jewelry, Art and Antiques Show. In the booth’s interior, the gallery will unveil a new collection of unique, material-driven studio works made with today’s most refined techniques in sculpting and casting across metal and wood. From bronze light installations to hand-carved walnut consoles, the works are unified by their innovative design.

Central to the booth’s focus will be a spectacular new monumental LED and bronze light sculpture by Irish artist Niamh Barry. This large suspended light sculpture, Black Poise, floats effortlessly in perfect harmony of material and form. The suspended, sinuous structures are inspired by human movement and displayed so as to be experienced from every angle.This 7`-foot long work incorporates interlocking black patinated bronze rings with three hand-raised bronze vessels. The interiors of the vessels are finished in polished copper and illuminated by a glow of hidden dimmable LED lights.  As in Barry’s celebrated earlier works, Black Poise is a feat of handcrafted metal work, perfectly illuminating Barry’s mastery of balance and movement.

The gallery will exhibit Molly Hatch’s newest plate painting installation, Aria, based on an early 13th century Islamic plate from the collection of the Metropolitan Museum. Innovations in early Islamic luxury ceramics from this time include “minai ware” which introduced polychrome enamel designs and gilding onto previously glazed and fired pottery. Composed of 37 painted porcelain plates installed in a geometric honeycomb pattern, each round surface serves as a canvas for the artist’s brush strokes; together, the plates reveal the intricate abstract floral motif of its source material. Its vibrant color and gold accents reference “minai ware” while the composition of ceramic plates is decidedly contemporary.

Visually extending the booth’s presentation of mixed materials, the gallery will show Soraya Osorio’s sleek steel and bronze furniture pieces that combine both sharp and rounded forms in monumental scale. Osorio’s Epic Desk will debut with its new complimentary Epic Chair. Perfected in a semi-circle, the Epic Desk, is composed of curves and lines that appear differently from every angle, furthering the viewer’s motion around the pieces. Observed from straight on, its blackened steel legs are broad lustrous planes; from a different vantage point, they appear as thin sheets of metal, disappearing to millimeters and almost invisible to the human eye. Both the Epic Desk and Epic Chair distill the spirit of their surroundings, transforming complexity to simplicity, weight to fluidity, and color to radiance. Confident lines and curated hues are signature elements of Osorio’s mastery of metal work.

Her pieces are defined by their intricately detailed surfaces, as well as by the versatility of those forms: Sun and Moon, an immense bronze relief contrasts turbulent, twisted forms cast from actual lava rock with gentle slopes and folds reminiscent of an undisturbed stretch of beach to present a metaphorical “sun” rising over a “moon.” The entire sculpture with its ceremonial monumentality radiates a warm glow from embedded LED’s, while a curtain of horsehair dramatically descends from the base of the bronze. Sullivan’s continuing repertoire offers a visual, elegant equilibrium between artifice and nature.

Like Osorio and Sullivan, Gary Magakis has a commitment to small production that allows his work to fully represent his personal ideals of nature inspired design. The bold and dense geometric forms of Magakis’ latest works exude elegant, buoyant elements of Modernism while drawing inspiration from his surrounding landscape.

Magakis channels architectural elements in design while tapering each of his forms uniquely. The two Stacked Low Tables as well as the Steel and Bronze Cantilevered Console project a pleasing weight and gravity.  Like large, flat, river stones, the forms that make up the level planes casually reference the centuries old stonewalls that populate Magakis’ rural surroundings in Pennsylvania. The density of the silhouettes is juxtaposed with a cantilevered weightlessness giving the tables and console a sense of playfulness while retaining a muscular visual power. Though the individual sections appear sharp at first glance, they are actually gracefully curvilinear.

In addition to the magnificent bronze and steel pieces on view Todd Merrill Studio will showcase new artisitc acheivements in wood with exquisitely hand-carved consoles by Marc Fish. Fish is constantly striving to transcend the barriers of art, design, sculpture and furniture. His sublimely unique works possess a timelessness that could be found seamlessly in the most contemporary of settings to the most traditional.

The One Piece Console is the third bronze and oak work created in the artist’s unique One Piece series, wherein the artist explores the positive and negative space that a single piece of wood can occupy. Evocative of human forms, the console showcases Fish’s incredible mastery of the most refined practices in micro stack-lamination. The table is made from nearly 100 pieces of oak timber, manipulated into shape, hand-carved, and then sanded until smooth. Alongside the oak, resin, bronze, and squid ink dye are used to create the exquisite textures and colors that follow the console’s curves.  At once unique sculpture and functional console with a 16″ deep shelf, the sinuous and delicate object reveals the artist’s hand at work, while exuding a seemingly organic, unprecedented form.

Also on view will be a recent painting from New York born and based contemporary artist Ezra Cohen. Cohen is a known for his large, powerful abstract paintings. At the age of 16, Cohen began studying under noted Abstract Expressionist artist Knox Martin at the Art Students League of New York. His lasting association with Martin has uniquely informed Cohen’s approach to color and composition. Cohen strikes a masterful balance between chaos and control, frequently referencing the golden ratio. Cohen’s paintings have been exhibited in numerous New York art shows and are represented in over 30 collections across the United States and Europe.

The gallery will present a frieze of charcoal-on-paper drawings of a nude female by Jan Yoors. Reminiscent of his iconic tapestries, the drawings feature bold dark shapes and dynamic plays between negative space and shapes. Displayed tightly together, the lines from one carry into the next, creating new forms across the wall. Works from Yoors’ charcoal series were recently exhibited at the artist’s retrospective at the FeliXart Museum in Belgium and are featured in the catalogue accompanying the current exhibition Jan Yoors: A Retrospective at The Baker Museum in Naples. Similar works reside across museums worldwide including the Metropolitan Museum of Art, The Art Institute of Chicago, and the Museum of Art and Design.

In a recent series of works from 2010 Knox Martin’s bold use of black and white evokes de Kooning’s iconic black and white paintings. Martin’s works, whose titles allude to the female form, are integrated with highlights of pop colors underscoring their inherent vigorous spirit. New York painter Knox Martin is widely recognized for his lively, vibrant paintings that employ a distinct visual vocabulary of signs and symbols, often referencing nature and more specifically, the female form. With their large simplistic shapes, brilliant flatly painted colors, and complex structure, Knox’s works are immediately recognizable for their free execution and pop sensibility. With a career spanning over 8 decades, Martin has secured his legacy in the canon of important American artists.

Also on view are two pieces, c.1980, from a rare body of work similar in style to Martin’s archetypal abstract murals. Juxtaposing the multi-dimensionality of his handmade molded paper with a playful composition and palate, these pieces are unique examples of the artist’s bravado and ingenuity.

Through an exploration of diverse materials and innovative technique, Todd Merrill Studio continues to celebrate the best of studio driven artists bridging the gap between art and design and traditional techniques and modern innovation.