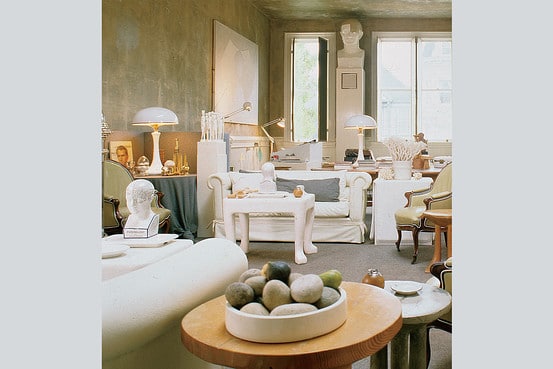 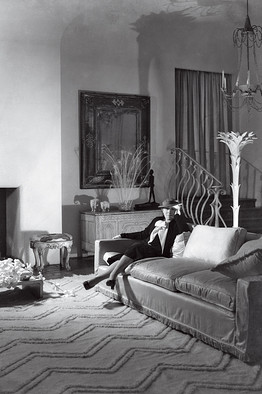 Syrie Maugham in one of her signature all-white rooms in the early 1930s. Courtesy of the Cecil Beaton Studio Archive at Sotheby’s

White Market
Adaptable and simple, plaster might just be the design medium of the moment

Last summer, decorator Michael Smith called artist Stephen Antonson with an unusual commission: a pair of Queen Anne side tables, entirely coated in unfinished white plaster. “There’s something very clean and American about them, but then you have those great Queen Anne lines,” said Antonson recently, on the phone from his Brooklyn studio. “I was inspired by the work of John Dickinson,” says Smith. “I’ve been really into his work lately. And I’ve always loved the design of New England tea tables.” An unlikely pairing, perhaps, but, says Smith, “plaster has the ability to blend nicely into any design scheme.”

Let’s get it out of the way: Plaster is old. Ancient, even. It goes back to Mesopotamia and wends its way through history via Western European architectural details like columns and moldings and pilasters. “Plaster was always in use,” explains antiques dealer and decorative arts historian R. Louis Bofferding. “These kind of pastelike substances were around presumably before anyone learned how to quarry a stone.”

Meanwhile, for several years decorator Miles Redd has been lining clients’ hallways with plaster palms and taking, say, a Louis XV–esque chest of drawers to Antonson to dunk in the white stuff. “It’s like encasing everything in a marshmallow wrapper,” says Redd. Appropriately, that candy-sweet piece was headed for a little girl’s room. And in Redd’s own Little Italy townhouse, a plaster console has been made to look like a cloth-draped table. What’s currently taking shape in his imagination is a heavily swagged canopy bed…in plaster. “Decorators don’t think of it unless they think kind of like an architect,” says Redd.

The story behind this literally off-the-wall use of plaster actually began in the ’30s. Serge Roche, a second-generation antiques dealer, began making ornate Rococo plaster tables, mirror frames and palm-frond torchiers during the Great Depression to bolster the stock of his Paris shop.

“Business was bad, so in order to keep going, he decided to design furniture,” says Bofferding. “Not everything was done in plaster, but most of it was.” Along with fellow Parisian Jean-Michel Frank—who sold the work of Emilio Terry and sculptors Alberto and Diego Giacometti—Roche became the go-to plaster resource for the decoratrixes of the day, such as Elsie de Wolfe, Frances Elkins and particularly Syrie Maugham, who snapped up pieces for her signature all-white rooms.

In that era, plaster had a touch of whimsy and the surreal—Maugham collaborated with Salvador Dali on a plaster lobster phone—but it was still mostly focused on traditions past. It’s no surprise that as the forward-looking ’60s rolled in, plaster took a backseat to steel and glass. San Francisco decorator John Dickinson was part of its revival in the ’70s with his almost cartoony animal-footed stools and tables. Michael Bruno, founder of 1stdibs.com, reports that around 2008, Dickinson pieces started selling to serious collectors for up to $50,000. (For any decorator who wants the look without a five-figure commitment, furniture company Sutherland now has a line of Dickinson reproductions made in fiberglass-reinforced concrete.) “That probably leaves more of a mainstream following a few years behind,” says Bruno. “But I think it’s always going to be popular on some level. It’s clean; it’s modern. If you have a white room, it looks great. If you have color, it looks great.”

Original pieces from Roche and Giacometti are doing well too, while artisans like Carole Gratale and Démiurge are doing a brisk business with pieces in their style. Plaster clearly isn’t going anywhere. If anything, it’s just getting bigger. Consider Antonson’s dream project: He wants to cover New York City’s Guggenheim Museum in plaster. Talk about great lines.