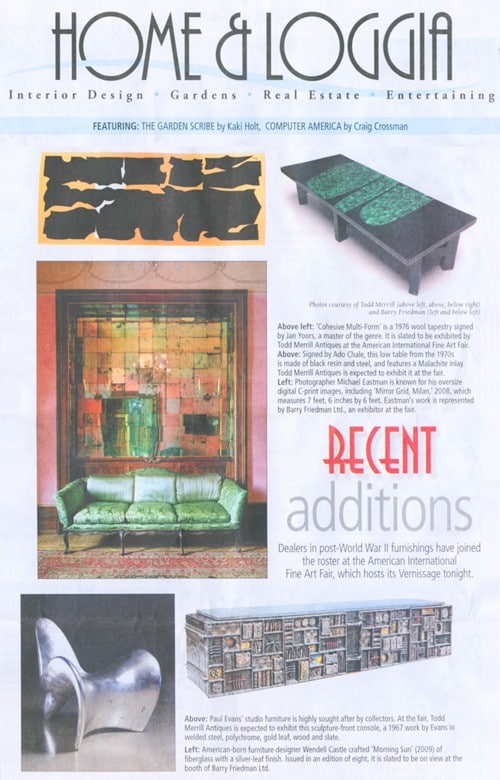 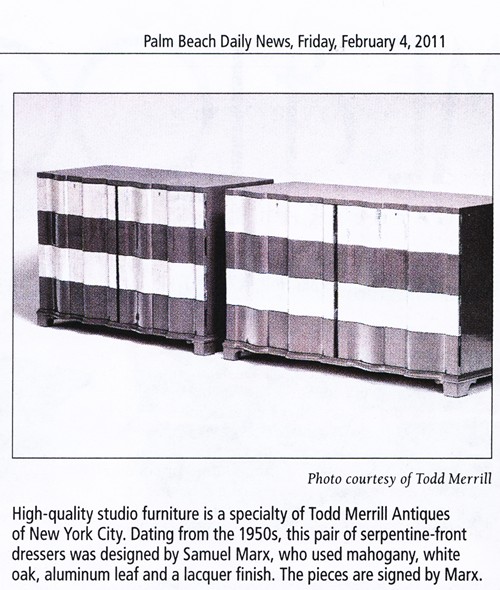 When the American International Fine Art Fair opens Friday night with its by-special-ticket Vernissage preview party at the Palm Beach County Convention Center, guests will find something new and newer among the fine French antiques and Old Master paintings they have come to expect at the exhibition and sale. Todd Merrill Antiques and Barry Friedman Ltd., two New York-based dealers regarded as experts in post-World War II high-end furnishings and art, have joined the exhibitors at the fair, which opens to the public on Saturday for a nine-day run.

The two Manhattan vendors, late additions to the event, were solicited by fair co-owner David Lester, who says he is embarking on a mission to broaden the range of merchandise to reflect recent trends in the marketplace amid a shifting economy. Lester says the high-end event must broaden its appeal to a new generation of collectors who have embraced items that might stretch the boundaries of what defines an “antique.”

“We’re going to move toward that. The galleries themselves are moving toward that. Traditional dealers are adopting a more modern stance,” says Lester, adding that a number of venerable antiques dealers are simply no longer in business, including England’s Jeremy, Partridge Fine Art and Hotspur, all having closed in the past two years. “We’re seeing tremendous changes in the marketplace,” adds Lester, who with his wife, Lee Ann, founded the fair 15 years ago.

The couple sold the event to DMG Productions in 2001, then reacquired it in 2008. In addition to several other exhibitions, including the Miami International Art Fair, they also own the Palm Beach Contemporary art show, which drew record crowds to the convention center during its run late last month.

The addition of vendors selling furniture from the recent past will complement the contemporary art that has already become an increasingly important category at the American International Fine Art Fair, David Lester adds.

The addition of dealers Todd Merrill and Barry Freidman with their post-WWII art and furnishings is similar to a shift that occurred a number of years ago at the fair, when the exhibitor roster expanded to include vendors of high-end Art Deco and Art Moderne furniture and decorative accessories from the first half of the 20th century. “When we started the fair 15 years ago, everyone wanted 18th-century furniture,” Lester explains. “We have adapted (the vendor mix) as tastes have changed.”

So it’s a logical move these days, he adds, to invite dealers who specialize in top-quality items from the second half of the last century — a move seconded by third-generation antiques dealer and author Todd Merrill.

Merrill’s company will showcase high-end American and European furniture crafted by artists and designers in their studios during the years spanning the late 1940s to the 1970s. The focus at Merrill’s booth will be on so-called “studio furniture” — custom-made pieces and those produced in extremely limited editions by modern masters of the genre such as the Italy’s Geo Ponti and America’s Paul Evans, Wendell Castle and Vladamir Kagan, who is today a part-time Palm Beacher.

Merrill views this merchandise as part of a “continuum” of furniture design that started with the ancients. Look around at the fair’s traditional vendors, he says, and you’ll see the forerunners of the chairs, tables, consoles and other items on view in his booth. “These are the furniture masters of the 20th century,” says Merrill, who two years ago co-authored Modern Americana: Studio Furniture from High Craft to High Glam, a seminal book that for the first time collected and documented the studio work of 27 U.S. designers working in the years following WWII.

Featuring high-end materials — including exotic woods and animal skins — along with innovative forms and a high level of craftsmanship, the studio pieces are distinct from the mass-produced mid-century furniture by companies such as Knoll and Herman Miller. Merrill says his company acquires pieces at auction, from estates and from other sources. And because they are either unique or limited-edition pieces, their retail prices reflect their rarity.

“We’ll be showing a Paul Evans console that cost $6,000 in 1965,” says Merrill, adding that one could buy a house for that amount at the time. He notes that the console — which these days is priced at more than $200,000 — has kept its relative value. Evans’ work, Merrill adds, is especially collectible, because it is not viewed as derivative of European design. “Evans is the only American furniture make in history that has a true worldwide collecting base,” says Merrill, who has also exhibited at Art Basel in Miami and Switzerland.

In comparison to Merrill’s inventory, Barry Friedman Ltd.’s booth will offer an intentionally broader look at the contemporary collecting market, says Carol Hochman, the gallery’s director. “The great thing about these fairs is that you can exhibit a wide variety of pieces and periods,” she says. “We can bring a very broad selection.”

Over the 40 years that Friedman has been in the antiques business, he has continually broadened his interests — and the gallery’s inventory reflects that stance. Genres represented include painting, ceramics, photography, furniture, glass and metal. The Chelsea-based gallery mounts a full schedule of exhibitions each year and specializes in art scholarship and catalogs. “Barry has an uncanny ability to be a step ahead,” Hochman says. “Over the past several years, we’ve begun to deal much more in (work by) contemporary (artists and artisans).”

Hochman, who says Friedman exhibited once before at the fair, says the event will afford visitors a chance to see work they might not otherwise encounter.

Visitors to the fair also shouldn’t assume that a more modern or even cutting-edge contemporary piece can’t work in a more traditionally decorated home, Hochman adds. Carefully juxtaposed, such a piece can provide a striking accent in an interior, she says.

Her additional advice for visitors? Don’t hesitate to ask questions, so that you can learn more about the pieces tha­­­t catch your eye. “Pursue anything that makes your heart beat faster — and then do a little research on it,” she says.

For his part, show owner Lester is hoping that the addition of Todd Merrill Antiques and Barry Friedman Ltd. will make visitors’ hearts beat a bit faster, too.

“There is no more sophisticated market than Palm Beach,” he says. “People here are knowledgeable and worldly. You have to be on top of the market to reach them.”