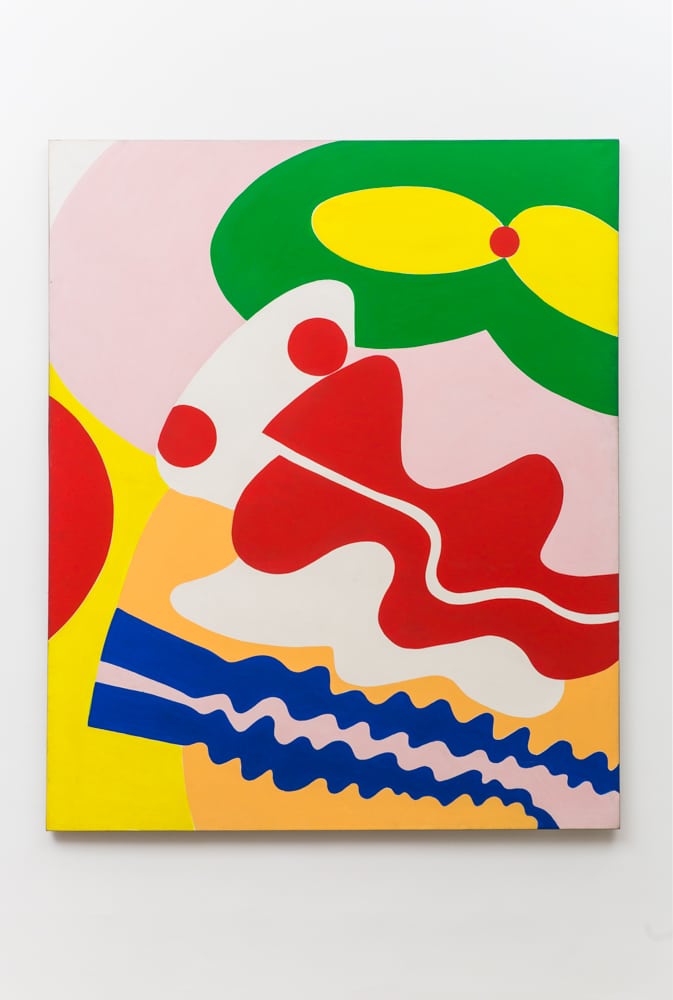 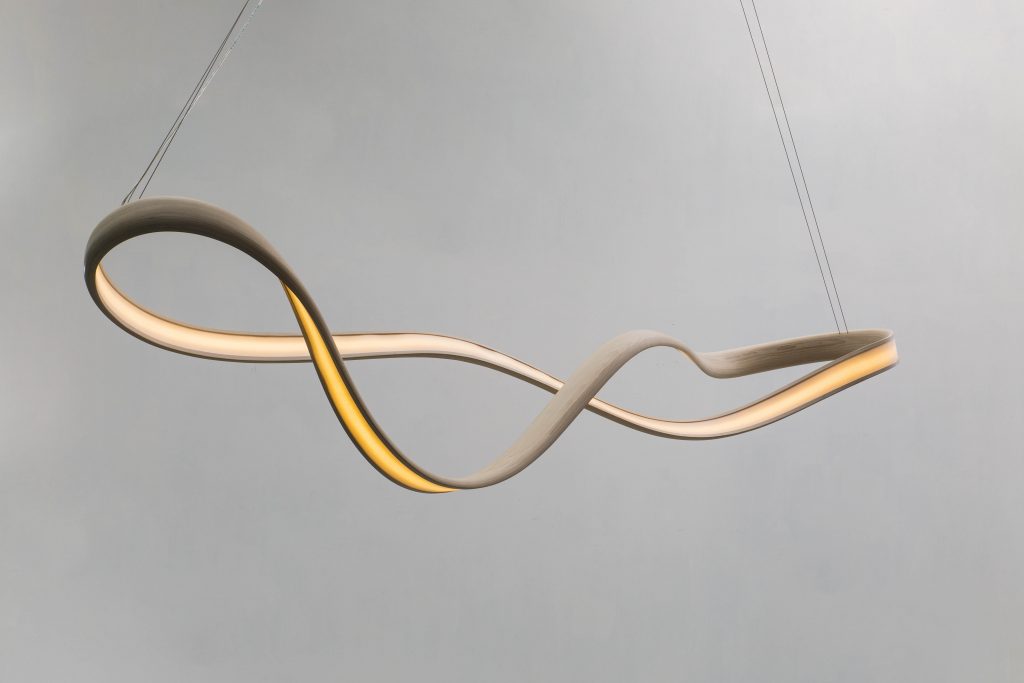 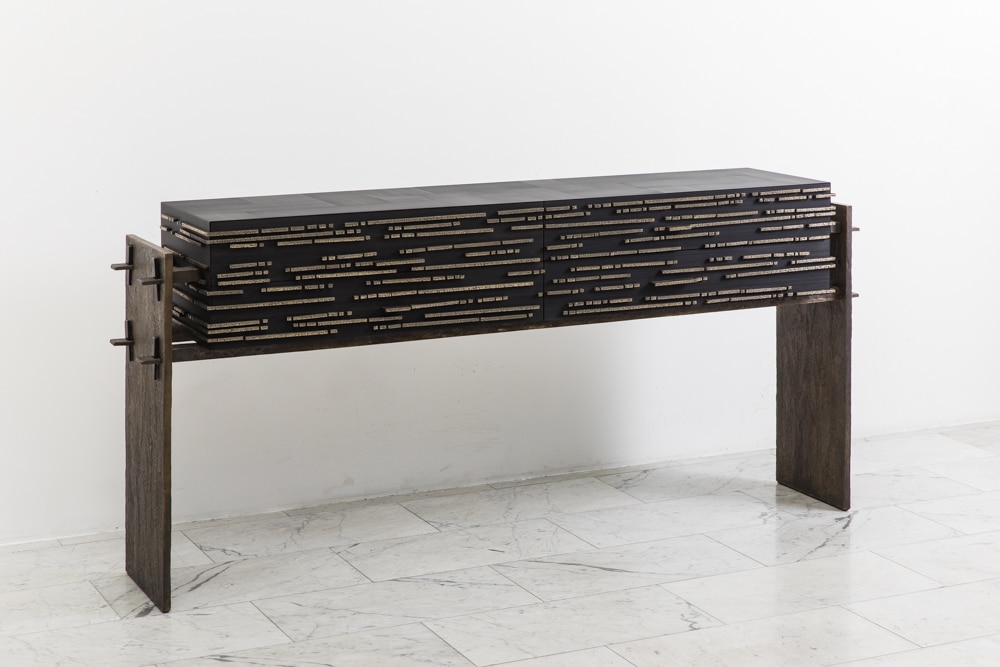 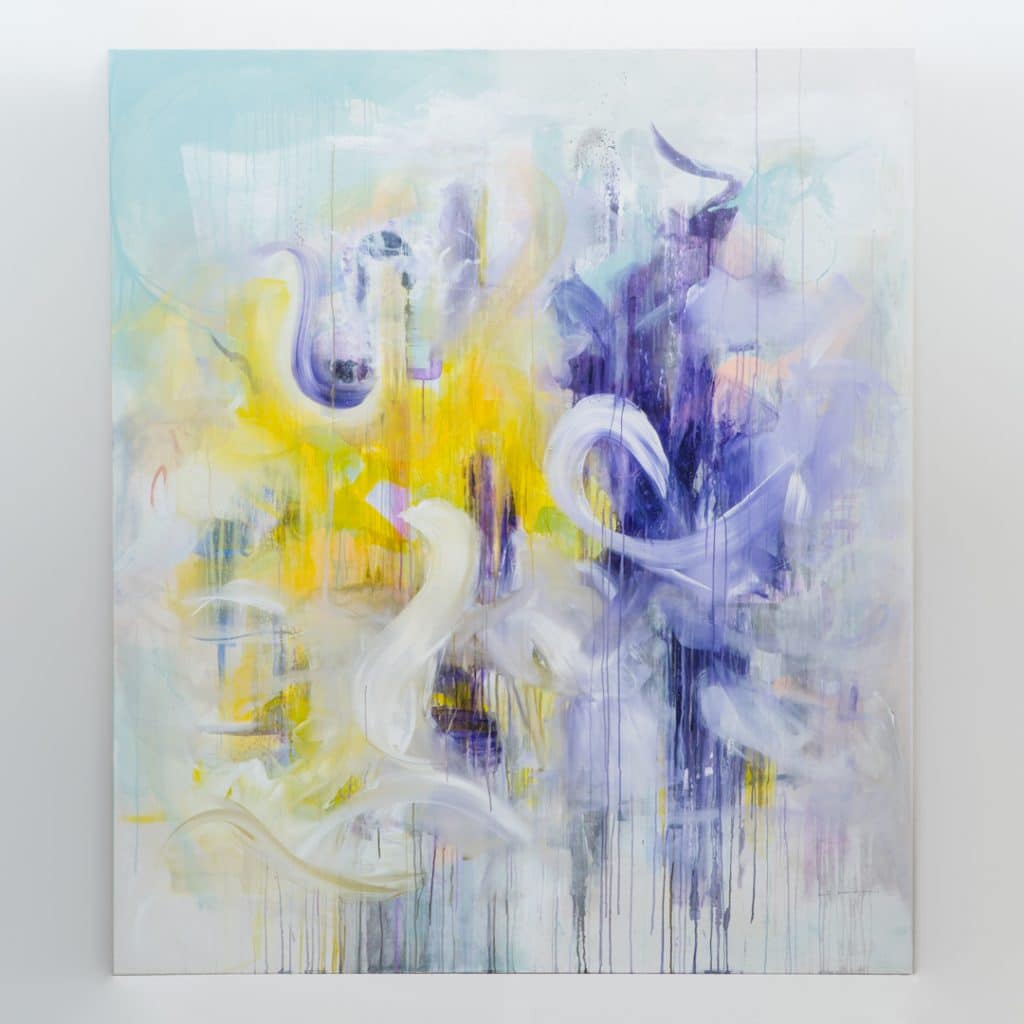 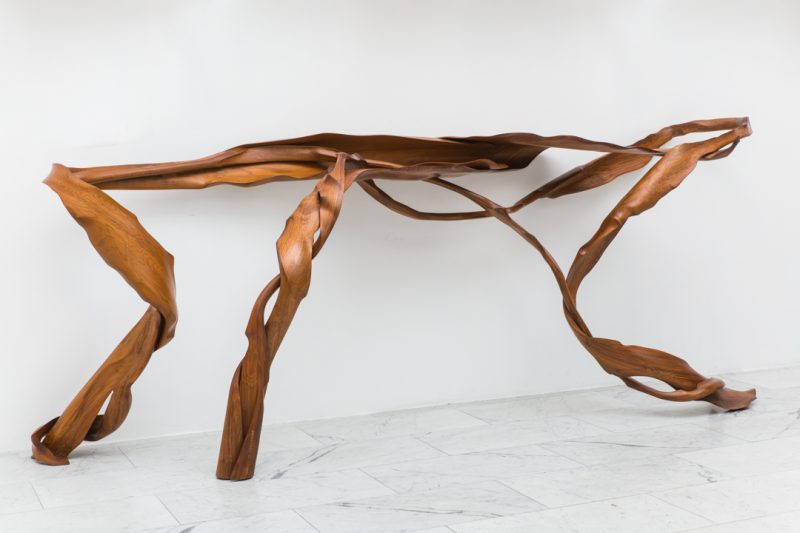 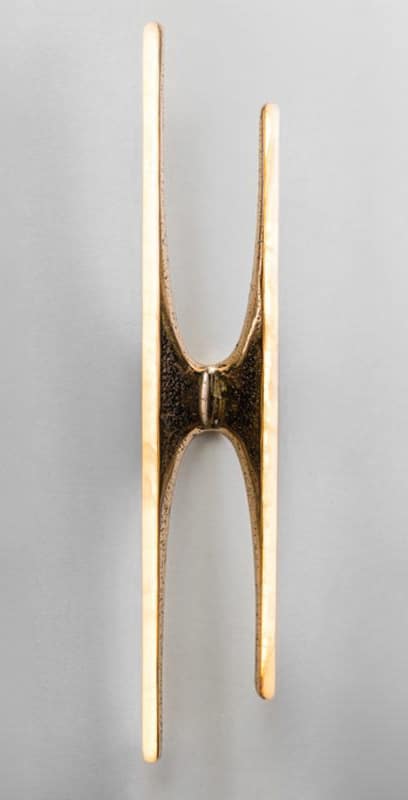 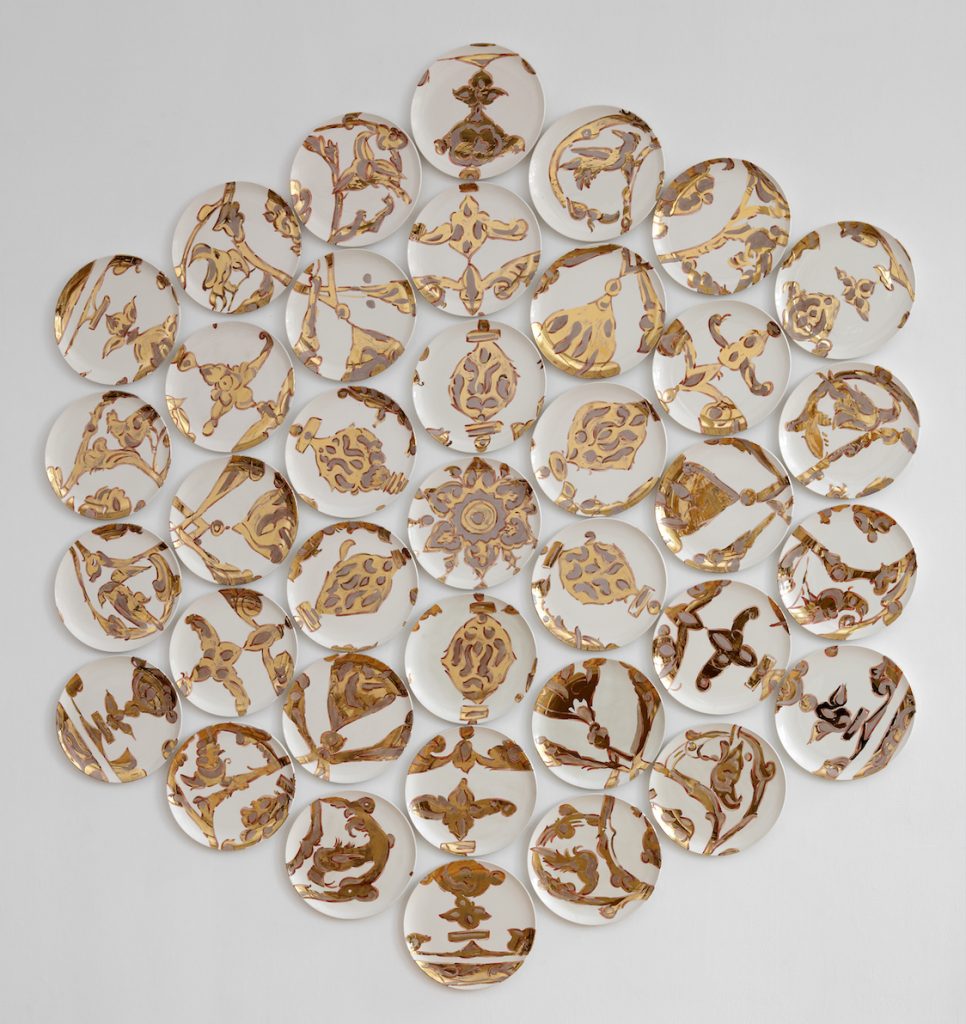 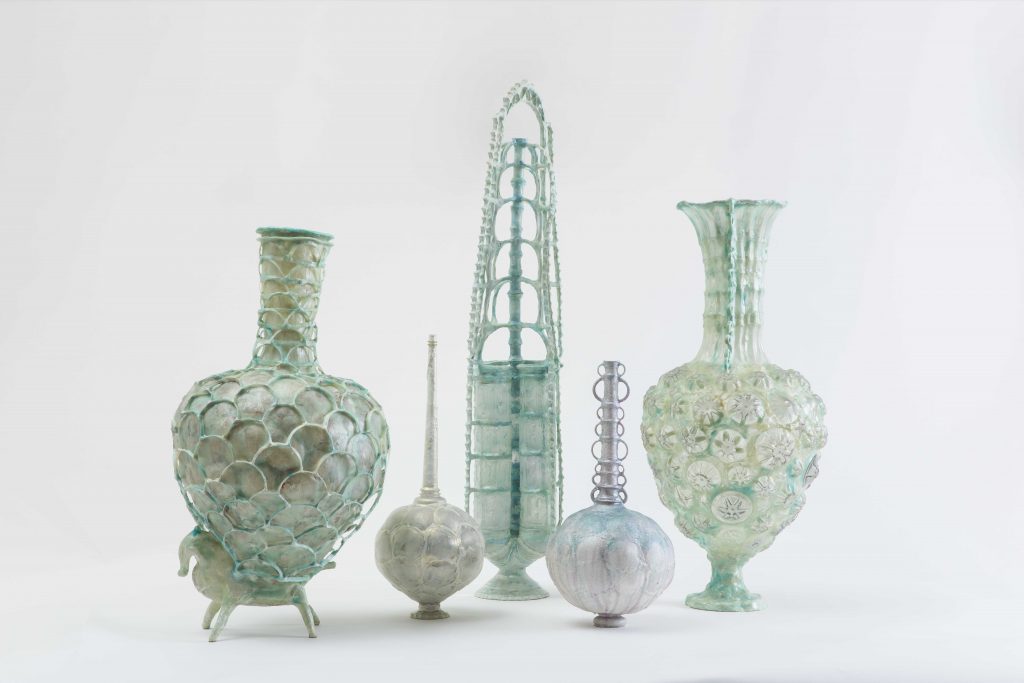 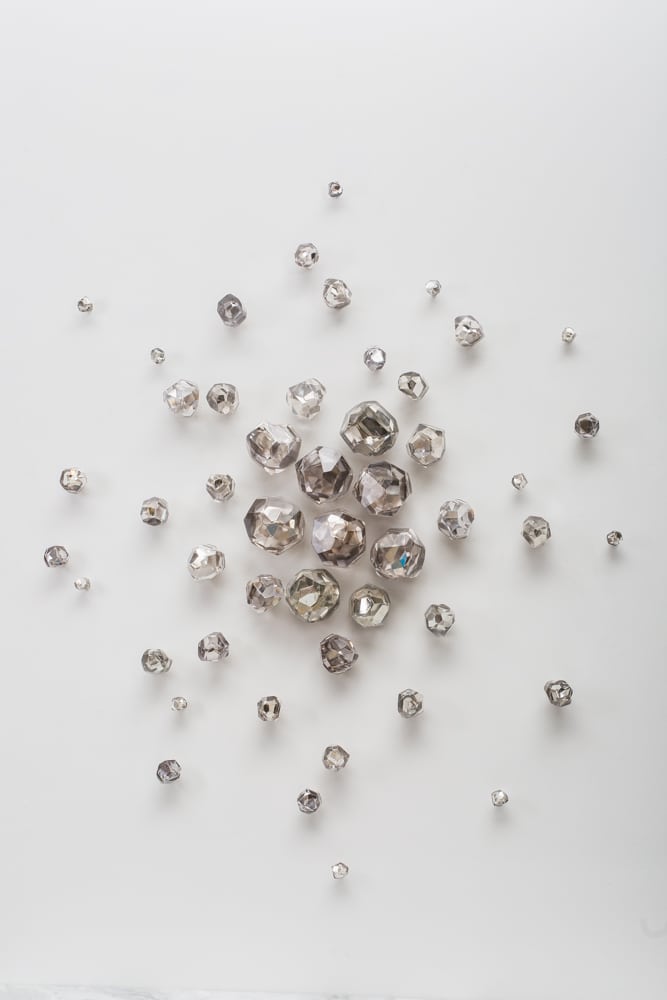 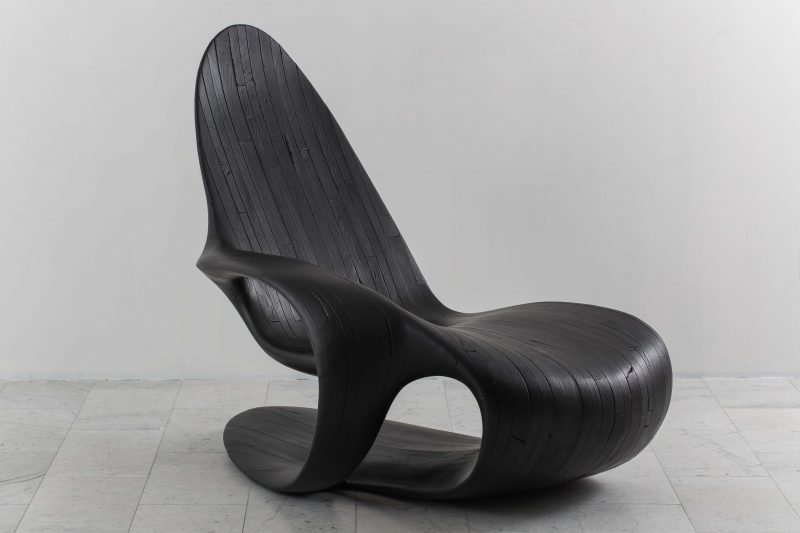 For the seventh installment of Art Wynwood, Fair Director, Grela Orihuela approached Todd Merrill Studio to help showcase the increasingly viable market for works that straddle the line between fine art and contemporary design.  Todd Merrill Studio has built a well-recognized reputation for showing a diverse group of artists, each sharing an underlying drive to push their chosen medium to their absolute aesthetic limits. Their dynamic, unique, and frequently groundbreaking pieces contribute to today’s increasingly relevant gray-space between art and design.

Since his first one-man show in 1954 at the Charles Egan Gallery, Latin American artist Knox Martin has garnered attention from critics and collectors alike.  Born in Barranquilla, Colombia, Martin’s family eventually moved to New York City.  A member of the New York School, his works have been placed in over 40 museum collections in the U.S. and internationally.  In addition, Martin is renowned for his numerous large-scale mural commissions, including “Woman with Bicycle” and “Venus” in New York City.  Impeccable draftsmanship and a unique metaphor mark Martin’s work.

Martin has allowed unprecedented access to his works dating back to the 1970s and continuing through to the present.  This will be the first time, in decades, that these early works will be made available to the public.

Much like Martin, Maximilian Magnus creates large, gestural images with a strong focus on aesthetic composition and movement. Having studied dance from a young age, Magnus uses the powerful and broad movements of his body as an expression of emotion, then transfered onto the canvas. Lyrical and diaphanous, Magnus’ paintings are deeply layered, giving the viewer a sense of looking through veils to untangle the markings beneath.

Another Latin American artist on view, Pedro Friedeberg is best known for his surrealist work characterized by tense line work, vibrant colors, as well as ancient and religious symbols. Since the 1970s, Friedeberg has been captivated by pagan idols, using them in a collection of eccentric mixed media sculptures. Siamese Serpent incorporates classic elements of Friedeberg’s work such as the use of disembodied santos heads, hand imagery and a gilded spiral structure culminating in a large hand displaying the sign of “devil horns.”  The work its highly unique given its large human scale.

At twenty-four years old, John Procario brings his love of woodworking to the world of design. After studying sculpture in graduate school, Procario developed a unique aesthetic that influences his sculptural lighting. Procario’s sculptural lighting pieces are composed of micro-laminated, hand-bent wood, embedded with LEDs resulting in an organic and endless fluid line that is design balanced with a sense of motion.

Further bridging the gap between art and design, Shari Mendelson creates handmade vessels that are made of discarded plastic bottles and inspired by ancient vessels. Her interest lies in the balance between emulating the ancient objects she loves and creating her own original sculptures. At first glance, her work may resemble the glass or ceramic upon which it is modeled; however, upon closer inspection a logo, recycling stamp, or bottle expiration date reveals its actual material. Using recycled trash to make works that reference elegant objects of the past offers Mendelson the opportunity to playfully explore the transformation of form and material while reflecting on issues of history and culture.

Mendelson’s vessels reside in various museums including The Cooper Hewitt National Design Museum in New York, The Museum of Fine Arts in Boston,  and the Museum of Old and New Art in Australia. Mendelson’s newest sculpture commissioned by the Rhode Island School of Design Museum entered its permanent collection in 2015.

Gaining critical attention from designers and collectors today, the artist’s work is commissioned and exhibited worldwide. As Haase works on a commission basis, custom sizes and materials may be accommodated.

British – American artist, Joanna Manousis lives and works in the United States, creating sculptural objects and installations in glass and mixed media. Her work captures and animates liminal moments, revealing a world in which objects, beings and places are interconnected. Predominantly composed of glass, the works induce reflection in the viewer, both physically and metaphorically. Indra’s Web (on view) refers to a complex system of multifaceted jewels that was used to describe the interconnectedness of society and the universe in Hindu cosmology. Configured like a star cluster, the 50 clear crystal prisms that comprise Indra’s Web contain the negative spaces of prisms with alternating angles that have been gilded internally with silver.

Jean-Luc Le Mounier’s, four drawer Filigrane Console features a top finished with panels of satiny, incised ebony laid out in a geometric mosaic pattern. Resting between two cast, patinated, white bronze panels the case of the console is held in place with hand formed bronze pins. The oak interior of the drawers are finished using the shou-sugi-ban method, an ancient Japanese finishing technique that preserves wood by charring it with fire. In addition to being aesthetically striking and elegant, the finishing technique strengthens the integrity of the oak.  Inspired by the texture of the oak, Le Mounier has used the charred surface of the interior as individual cast bronze details in the front facade of the piece.  These white bronze accents flow across the console creating a striking sculptural front that evokes written music or language, and upon closer examination, function as the console’s drawer pulls.

Le Mounier spent much of his childhood in his grandfather’s carpentry workshop where he would craft tiny pieces of furniture with the tools and materials he could find there. Fascinated with wood, he started his training as a cabinetmaker in 1995. In 2003, Le Mounier opened his own workshop where he could express his passion and explore the many possibilities of crafting unique furniture design.

In his Dinard workshop, in the heart of his native Brittany, Le Mounier now conducts of team of master craftsmen to create elegant and graphic furniture deeply rooted in tradition with decidedly modern motifs. Together, they create singular pieces of precision design, harmoniously mixing rare woods with precious metals. The high level of attention to detail in both construction and design is a testimony to Le Mournier’s audacity and sensibility. Drawing inspiration from natural elements, art, fashion, and architecture the works mix strength of form with a lexicon of uncommon details and imagery that is both graphic and elegant. The broad range of woods and metals used, which can be as diverse as sycamore, ebony, bronze, steel, enamel, or sand, as well as the unpredictable way in which Le Mounier manipulates them, sets the artist apart.

A unique, material-driven sculptural chair by Ian Spencer and Cairn Young of Yard Sale Project, Chaise One explores unprecedented forms in wood. At once inspired by and made to support the human form, the French walnut hand-carved chair evokes a sleek, curving body. The chaise’s smooth surface highlights the wood’s natural grain, reflecting light to reveal the wood’s beautiful, organic imperfections.

The use of French walnut is both aesthetic and pragmatic. Rich in color and texture, walnut is also a relatively lightweight, superbly strong, and versatile wood. The wood that composes the pictured chaise came from trees grown and harvested in Dordogne, a region in France famed for its walnut production that has persisted for centuries. These trees, harvested using a sustainable farming model, were 100-year-old farming trees that had reached the end of their working lives. The wood is finished using the shou-sugi-ban method, an ancient Japanese finishing technique that preserves wood by charring it with fire. In addition to being aesthetically striking and elegant, the chaise is rot, pest, weather, UV light, and fire resistant.

The Pure Black Series explores the contrasts that exist within materials. Pure Black represents a new direction for Yard Sale Project in their continuing search for the new and exciting within the world of furniture.

Marc Fish’s incredible mastery of today’s most refined practices in micro stack-lamination formed the genesis of The Laminaria Console. Stimulated by marine life, the Laminaria Series ] takes inspiration from twisted seaweed forms, as its title, Laminaria, a genus of seaweed, suggests. Manipulated into winding, layered shapes, this walnut console has been pieced together from hand-shaved, paper thin laminations of walnut. The sinuous and delicate forms reveal the artist’s hand at work while embodying a seemingly organic structure.

Born and raised in Boston, Massachusetts, Barron Claiborne is a self-taught photographer who moved to New York City in 1990 where he quickly became noticed for his evocative portraiture, most notably, his image King of New York featuring rapper Biggie Smalls wearing a plastic crown.

Claiborne’s photographic influences are often derived from his Southern and African ancestry, and he uses his work as a canvas for representing the tales and oral traditions at the roots of his heritage. For the past 3 years, Claiborne has worked on an 8×10 Polaroid project focusing on the bodies of women, saints, and goddesses.  On view will be Claiborne’s seminal work (Old) Orleans Before The Deluge (Triptych) #2, USA, c. 2005 which is also in the collection of the Brooklyn Museum.

Claiborne’s work has appeared in a number of publications including Newsweek, New York Times Magazine, Rolling Stone, and Interview and have been shown and collected by museums and private collections nationally and internationally.