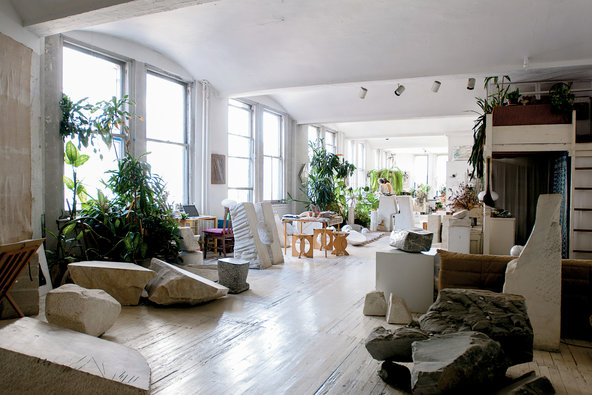 In 1978, Hanna Eshel craned 22 crates of marble sculptures into her loft, where they remained for 35 years. 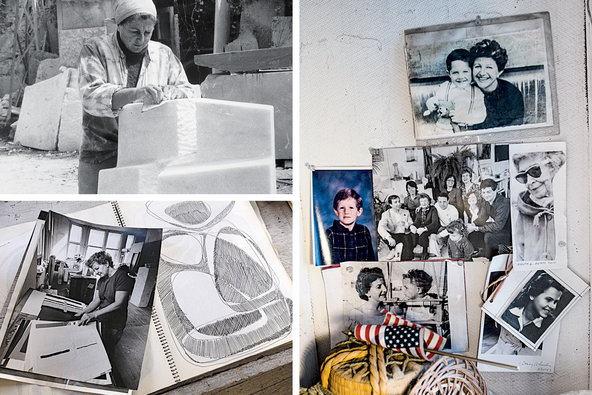 Clockwise from top left: Eshel working on a large-scale sculpture in Carrara, Italy, in 1976; photographs of family and friends tacked above her dresser; a photo of Eshel from the ‘80s lies on one of the artist’s sketchbooks. 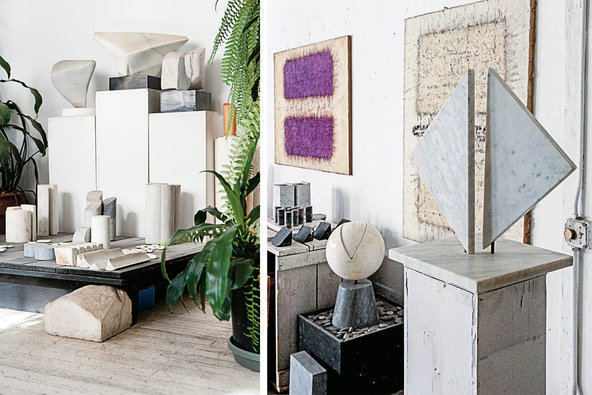 From left: Eshel grouped smaller-scale sculptures on a plinth surrounded by plants; paintings Eshel made in the ‘60s hang above her marble sculptures from the ‘70s.

The New York loft where the sculptor Hanna Eshel lived and worked under the radar for more than 30 years stands as a testament to her undying devotion to art.

Two years ago, Hanna Eshel was looking for a roommate and placed this ad on Craigslist. “I didn’t want to explain my loft; you just have to see it,” the 87-year-old artist said of the apartment where she lived and worked since 1978. Filled with climbing houseplants, simple wooden furniture and, most profoundly, her art — abstract paintings and hulking sculptures made from Carrara marble — it’s a place that time forgot. For nearly four decades, she chiseled and sanded away in quiet obscurity, apart from a few small shows. “I had no interest in promoting art,” she says. Besides, the sensuous, minimalistic forms of her work were not necessarily in step with the current trends. “There was Pop Art and Op Art. I didn’t follow the fashions.”

But the art world finally seems to have found her. Through Quinn Luke, a downtown musician and art consultant who answered her ad and swiftly moved in, Eshel was introduced to a few gallerists, including Patrick Parrish of Mondo Cane and Todd Merrill, who immediately took an interest in her work. In the last year, her name has started to pop up on design blogs and her collages are now being sold at cool boutiques on the Lower East Side. “It’s high time,” Eshel says. “I’m satisfied that people are finding the strength of my work.”

Eshel was born in Palestine when, according to her, “there were no hard feelings between Jews and Palestinians.” Rebelling against her strict upbringing, she began studying art and joined the Haganah, the Jewish military organization, eventually finding herself on the front lines in Israel’s 1948 war of independence. She moved to Paris — to study painting at the École des Beaux-Arts — where she became a wife and a mother, as was expected at the time. While her home life seemed settled, her work became less so. Frustrated by the two dimensions of canvas, she began adding slashes, holes and elements of collage. She applied layers of burlap, which she frayed into loose string, “like the roots and trunks of trees or the veins in my hands.” Ultimately she found painting and her marriage too confining. Her husband wanted to return to Israel; she wanted to venture on to New York, but only after a brief stop in Carrara, Italy, to make a few sculptures for an upcoming show. She had tried her hand at sculpting with Styrofoam, which she found too light, and terra cotta, which she found too sticky. “I needed a material with its own soul, one that I could love,” she wrote in her memoir, “Michelangelo and Me: Six Years in My Carrara Haven.” Marble would be her answer.

The move was not without challenges. She did not speak Italian. She was one of very few women sculptors in the small provincial town, and the work was physically grueling. But she proved a quick study, picking up the language, the skills of the trade and an Italian boyfriend. Two months turned into six years as she settled into her new bohemian life. She was warned that most sculptors tire of the physical demands by their 40s, and Eshel was 46 when she started working with marble. “It took me more than 20 years to get tired,” she wrote in her book.

Eshel eventually moved to New York and rented the open loft, painting it white from floor to ceiling. When the 22 crates of sculpture she had shipped from Italy were unpacked and installed in the loft, she wrote: “I could see them shining in the light of 15 windows. This was my new haven.” As the decades progressed, the space remained largely unchanged. “Thirty-two years, and never a wall,” Eshel brags. When dealers recently started appearing on her doorstep, they were shocked at what they found. “This is the situation you dream about,” Parrish says, “a body of work still in the artist’s studio, virtually untouched.”

Despite the fact that much of her work was made 40 years ago, it feels current. The forms are strong but simple, elemental shapes with variations in texture, sometimes biomorphic, other times raw and angular. The work is incredibly tactile, which Eshel celebrates, once taping up a sign in a gallery encouraging visitors to caress the marble. The sculptures are often in parts that appear to have been one, perhaps representing the division of her native land or the inevitable separations that come from living as passionately as Eshel.

Fifteen years ago, unable to keep up with the physical demands of sculpture, Eshel tried her hand at photography. Again she found the medium confining. “I felt claustrophobic, in this little box,” she says. The artist solved the problem by extending the image off the photo with lines drawn in pencil. To this day, although she recently left her home for an assisted-living center, which she cheerfully refers to as “my little loft,” she continues to make small drawings, mostly lyrical squiggles that trail off the page. “I was in love with art,” she says with a wistful smile. “It was my big love.”