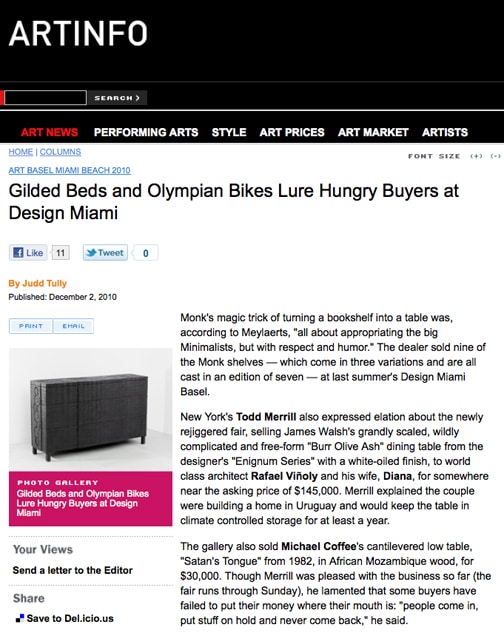 MIAMI— The six-year-old Design Miami fair debuted its new home this week, located across the street from Art Basel Miami Beach and sporting its sleek and spacious Moorhead & Moorhead temporary structure. Only fifteen fully-vetted design galleries — of global provenances, from Paris to Seoul — occupy the generously proportioned tent, offering an elite respite from the 250 galleries in the main convention center. In past seasons, fairgoers would have a $20 cab ride to face in order to visit the Design Fair in Miami’s Design District, so the new venue is both green and accessible.

One of the standout highlights is the sophisticated booth design of Paris’s Patrick Seguin Gallery, boasting a complete boudoir of sorts by the French designer Jean Royère, including a stunning Croisillon bed from 1949 and matching pair of Persanne wall lamps from circa 1950. The ensemble sold to a European collector at the Tuesday evening opening for around $200,000, according to the gallery.

New York’s Barry Friedman Ltd. also had an enthusiastic reception for Ingrid Donat’s remarkable “Commode 7 Engrenages” from 2008, a three-drawer piece in cast bronze featuring a surreal set of gears embedded on one side of the dresser that move as you open the top drawer. One of the edition of eight commodes sold for $125,000. Friedman also sold Herve Wahlen’s two-foot-high 2003 sculpture of hammered copper with gold leaf, “Luz (Sconce),” for $17,000, as well as Michael Glancy’s exotically crafted vessel and tray, titled “Verdant Flow,” executed in 2009 in deeply engraved blown glass with a uranium veil, industrial plate glass, copper, and silver, for $85,000. Glancy, who teaches at the Rhode Island School of Design, will have a solo show at Friedman’s Chelsea space in May.

Like what you see? Sign up for ARTINFO’s weekly newsletter to get the latest on the market, emerging artists, auctions, galleries, museums, and more.
There was also encouraging activity at Paris’s Perimeter Art & Design as a 2010 “Mono Sushi” sofa by Brazilian brothers Fernando and Humberto Campana sold to two different buyers for around $130,000 each. One in orange went to a New York collector and the sofa in red and black sold to a French collector. There are twelve colors in the series, with each hue coming in an edition of two.?

The gallery also sold two beautiful “C80” suspension lights in hand-blown Murano glass by the Italian designer Paola Petrobelli at an asking price of €7,000 ($9,200) each and a womb-shaped carved 2010 centerpiece called “Nacelle” by Matali Crasset for €7,500 ($9,850). “We had to ship the Crasset by plane,” said director Nicolas Chwat, “because it was only finished last week.”
Another lighting piece, Guillaume Bardet’s “Totem,” carved from white Cararra marble and part of his series inspired by an art colony stint at the Villa Medici in Rome, sold to an American collector for €15,000 ($20,000). “We came to Miami not knowing what to expect,” said Chwat, “especially since the Euro is so high and we haven’t seen many American collectors in Paris for a while, so we’re nicely surprised.”

Newcomer Dirk Meylaerts of the Brussels’ D&A Lab sounded thrilled at the opportunity at showing in Miami. “This is our first time here, and I never dreamed I’d reach Design Miami in four years,” he said, referring to the age of his gallery. D&A sold a one-off “Zeus” bicycle by the duo Amaral-Bostyn, a kind of gear-head homage to the famous Olympian-named Spanish brand of bicycle components. The designers chromed the original vintage tubing of the frame and recast the saddle, normally of leather, in aluminum. Wonderful details, like leaving the frayed and delicate handlebar tape on and covering the tires in silk, transformed the bike into a sculpture. It sold for $17,000 in the first minutes of the Tuesday evening opening. The gallery also sold Jonathan Monk’s “Low Table 1984,” a reinterpretation of Donald Judd’s “Bookshelf 1984” furniture piece, to a Los Angeles collector for $9,000 — the same price it would take to buy one of the commercially produced Judd bookshelves pieces from the Swiss company Lehni.

Monk’s magic trick of turning a bookshelf into a table was, according to Meylaerts, “all about appropriating the big Minimalists, but with respect and humor.” The dealer sold nine of the Monk shelves — which come in three variations and are all cast in an edition of seven — at last summer’s Design Miami Basel. New York’s Todd Merrill also expressed elation about the newly rejiggered fair, selling James Walsh’s grandly scaled, wildly complicated and free-form “Burr Olive Ash” dining table from the designer’s “Enignum Series” with a white-oiled finish, to world class architect Rafael Viñoly and his wife, Diana, for somewhere near the asking price of $145,000. Merrill explained the couple were building a home in Uruguay and would keep the table in climate-controlled storage for at least a year. The gallery also sold Michael Coffee’s cantilevered low table, “Satan’s Tongue” from 1982, in African Mozambique wood, for $30,000. Though Merrill was pleased with the business so far (the fair runs through Sunday), he lamented that some buyers have failed to put their money where their mouth is: “people come in, put stuff on hold and never come back,” he said.

Even though the sample of dealers buttonholed about results sounded thrilled, the tent on Thursday afternoon was practically empty, with staff and exhibitors, café workers and cleaners, probably outnumbering the scattering number of attendees. That could be timing, the hogging draw of the Art Basel Miami Beach fair, or perhaps the departure of the fair’s former main sponsor, HSBC Private Bank. In any event, the fair hosts its “Nocturne” evening tonight from eight to ten, and that will certainly buff attendance and massage more sales. But no matter how many people you might count, New York exhibitor Zesty Meyers of R 20th Century was practically jumping up and down with excitement about the new location. “It’s amazing and fantastic the number of people coming here and the number of new people we’ve met is beyond belief,” he said. The gallery sold Brazilian designer Joaquim Tenreiro’s painted-glass-topped dining table with ten beveled and round legged dining chairs “for a couple of hundred thousand dollars,” according to Meyers.

Gesturing towards other works on display, Meyers could barely keep track of what had sold, including a number of stuffed animals by Renate Muller that were priced between a few hundred dollars to $15,000. They also sold all three of the Greta Magnusson Grossman three-legged “Grasshopper” lamps from the 1950s at $18,000 each to one client. “It’s changing our world,” enthused Meyers. The design world is certainly global, and Seoul’s Gallery Seomi, which scored a direct hit with a series of “Steam” pieces by the 30-year-old Bao Sehwa. The unique pieces, inspired by traditional Korean design and taking a meditative attitude with mountain scenes and rivers, sparked sales for “Steam 11” and “Steam 14” at $20,000 each, the larger bench-like “Steam 15” at $28,000, and the coffee-table-like “Steam 16” at $12,000.

“The coming days are the more important,” observed Suzanne Demisch of New York’s Demisch/Danant, who has high hopes for their brand new Maria Pergay “Brick Sofa,” in nickled cast aluminum and bronze with polished stainless steel and a leather duvet, priced at $145,000.