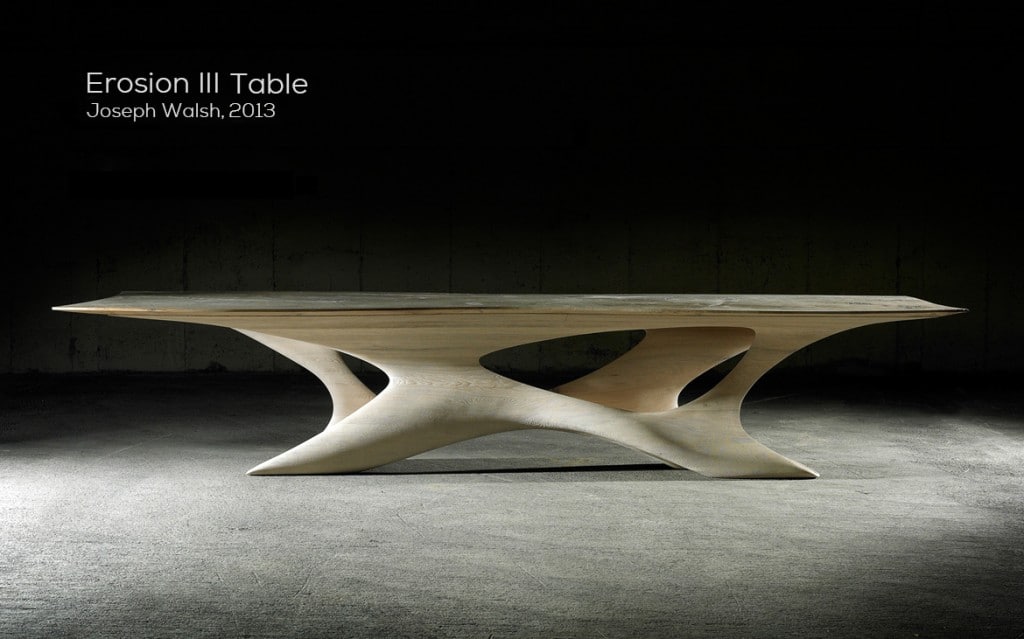 January 18, Palm Beach—Todd Merrill is pleased to be returning to the American International Fine Art Fair in Palm Beach, February 3 – 12, 2012, for the second consecutive year in a row. This is the first time that Merrill will be presenting works from both his Studio Contemporary program and outstanding modern 20th Century decorative arts in Palm Beach. Merrill introduced Studio Contemporary in 2009 and has since worked tirelessly to promote the best contemporary craftsmen working today. Merrill’s booth will feature the creations of Beth Katleman, Jennifer Trask, Michael Coffey, and Joseph Walsh.

“Folly” a 16 foot-long porcelain sculpture by Beth Katleman has been praised by critics world-wide following successful exhibitions last year in Paris, Basel, London, and New York. “Folly” is a three-dimensional ceramic rendering of traditional Toile de Jouy fabric or wallpaper. On close inspection, the elegant Chinoiserie-inspired pavilions that comprise the landscape of “Folly” are populated with kitschy figures from popular culture that tell a dark and poetic fairy tale. The exuberance and refinement of “Folly” are astonishing to behold as it simultaneously blurs the lines between art, design, and craft. “Folly” was exhibited at the Museum of Arts and Design in New York as part of the “Flora and Fauna: MAD About Nature” exhibition in the fall of 2011.

The booth will feature the work of Michael Coffey, the most important living American Studio furniture maker, and Joseph Walsh, one of the finest young talents in the world of studio furniture today. Coffey’s monumental cabinet “Galaxy II” (2010) is a tour de force of design and carving. This huge hand-carved 13” H x 10” W cabinet in American Black Walnut features six 4 inch thick sculpted doors inspired by the natural wear of river rocks. The dimensional aspect of the cabinet is striking especially in the deeply carved and curved corners. This is the largest piece that Coffey has created in his eight-decade career. Walsh’s “Prism Console Table with Boxes” (2008) was inspired by a simple sketch of the human form. The proportion, shape, and negative space (created within) of “Prism” combine to create an intriguing aesthetic and significant structural strength belied by the refined individual components.

Baroque splendor reigns in Jennifer Trask’s unique wall pieces, a combination of her fascination with organic materials such as bone and her fondness for antique found objects. Mimicking the most regal of mirrors, “Umi,” a polished graphite slice, pierced with an antler, is set in seventeenth, eighteenth, and nineteenth-century gold-leafed frame fragments. Evocative of its name (“Umi” means wave in Japanese) the highly stylized leaf forms on the frame resemble waves. Trask drew her inspiration from the water imagery of Hokusai and the contemporary seascapes of Sugimoto.

The New York-based Silas Seandel has been creating furniture out of metal for the last forty-five years. A monumental welded steel and bronze screen from 1966, originally designed and executed for a large carpet company in the D & D building in New York, will be displayed along side a large cast and welded bronze sculptural room-divider from the 1970s. Both pieces are a fantastic example of Seandel’s abstract designs in massive form.

After the triumphant sale of two major sculptures, a “Sonambient” and a “Double Gong” by Bertoia, at Design Miami/Basel in June 2011 for over a million dollars, Merrill will be exhibiting two colossal “Split Gong” bronzes (1976), one measuring six feet in diameter and the other five feet in diameter, both of these are part of a group of three gongs created for the grand opening of the Grieg Concert Hall in Bergen, Norway, which was also the home of the “Sonambient” sculpture. The three Gongs were originally installed as a single work, “Three Split Gongs”. The selection will also feature a spectacular bronze “Spill Cast” sculpture (1965), a large example of Bertoia’s amongst the vintage pieces will be a rare floor-standing two bi-fold door Sculpture Front Console by Paul Evans from 1964. The sculptural steel elements are covered in red, purple, green, yellow, and blue polychrome with gold leaf and black patinated accents. These floor-standing consoles are considered to be the most successful and most highly sought after pieces from the Evans studio. experimentations with spill casting liquid bronze.

Also notable is a gorgeous two-door console constructed using Evans’ “Argente” method of welded aluminum coated in black polymer paint. This console has two drop-doors that double as workspace. The Argente series of furniture is rare due to the challenges of working with welded steel. The series was discontinued early into its production, because of the complexities of working with welded steel, which makes this piece incredibly rare. This particular console was most likely used as a secretary but could also function as a sideboard or bar.

Included in the booth will also be a Monumental Tapestry designed by Jan Yoors from the 1970s. Yoors was the leading figure in tapestry design in the 20th century. He captured the modern spirit of the 1960’s and 70’s in his tapestry designs in the same way that the Abstract Expressionists were able to express it through their paintings. Yoors’ work was recently featured in “Crafting Modernism: Midcentury American Art and Design” at the Museum of Arts and Design in New York and will be the subject of a major retrospective at the FelixArt Museum in Brussels, Belgium in November 2012.